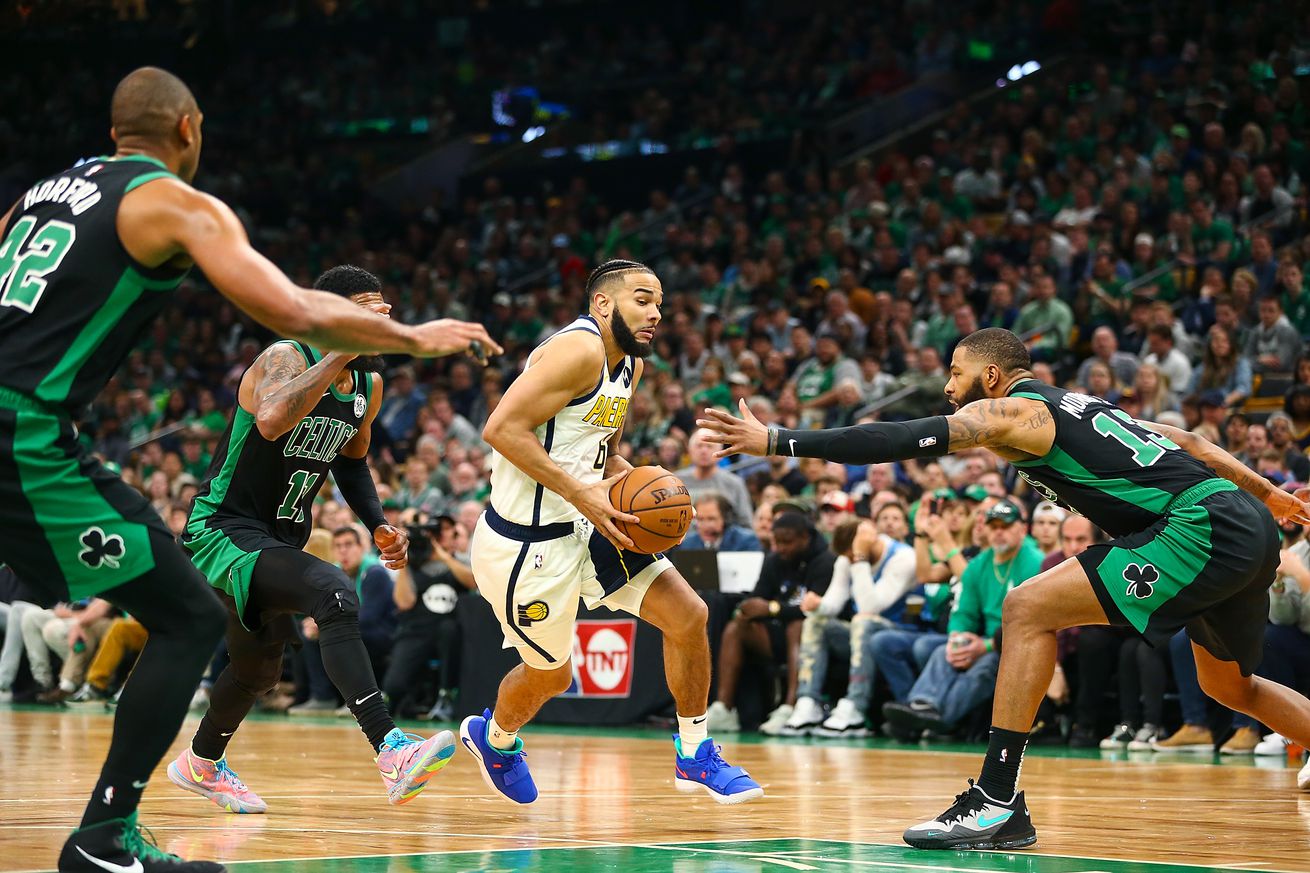 Early in the season, Jayson Tatum was taking too many mid-range jump shots. Call it Mamba Mentality or settling or whatever. Analytically, they’re just inefficient. Long-2’s are the empty calories of an NBA team’s offensive diet; if you’re shooting them at a high percentage, might as well make them 3’s and if you’re shooting them poorly, they’re wasted opportunities at taking it to the rim.

But on the other side of the ball, you want to force opposing teams to those 15-footers. Defenses are geared to bend and not break, protecting the rim and keeping teams off the three-point line. In the regular season, the Pacers (18.4 per game) and Celtics (16.8 per game) were top-10 in the league in mid-range field goal attempts. By comparison, the Rockets, the modernest of the modern NBA’s offenses, average just 4.8 FGA’s between the restricted area and the arc. Ironically, how both teams fare in an area where they don’t exactly want to shoot might tip the scales in this series.

In Game 1, the Pacers were a miserable 6-for-28 in the mid-range. Coupled with their anemic three-point shooting (6-for-27) and inexplicable nine missed free throws, that’s what 73 total points looks like. In their practice availability yesterday, Indiana did not seem concerned with their offensive output on Sunday afternoon. Here’s Thaddeus Young on the anomaly of their third quarter:

In his post-game presser, Brad Stevens also noted that Indiana just missed open shots to start the second half. It happens, but some credit is due to Boston for dictating what kind of shots Indiana took.

Ideally, the Celtics will pack in the paint with Aron Baynes and Al Horford on the floor together. They’ll concede that Darren Collison fall away jumper every time. On pick-and-rolls, Boston will ICE most of the time and have their bigs retreating into the paint and daring the Pacers to shoot from the mid-range.

Also, as Jack noted, the Celtics invited the Pacers to ISO players with favorable match ups. Sometimes, it was Wesley Matthews posting up Kyrie Irving. Other times, Bojan Bogdanovic went one-on-one against a slower, bigger defender. Here, Al Horford is a very capable defender, even against smaller guards and particularly smaller guards that will settle for pull up jumpers.

Here’s a wrinkle that’s worrisome though. Bogdanovic isn’t much of a threat in a PnR action. He doesn’t have the speed to get his shoulders passed a big or the strength to power through the verticality of Baynes or Horford in the restricted area. However, Bogdanovic is effective moving without the ball. He’s not exactly fast, but he’s really good at negotiating a screen and wasting no time getting a good shot.

In the clip above, Baynes would normally take a better angle on the drive if it had been a PnR action. But with Bogdanovic curling off a screen, he doesn’t have the time to set his feet. Bogdanovic misses the layup, but that’s a close shot at the rim that Boston would rather avoid.

Here’s another clever action from Pacers head coach Nate McMillan. McMillan knows that if Indiana runs straight pick-and-roll, Boston as time to set ther defense. Above, Indiana flows quicky from a PnR set to a DHO for the open Collison jumper at the free throw line. DC misses it, but it’s the perfect example of how the Pacers generate good looks in a widely considered not so good area of the floor.

Sometimes, playoff games are won by extraordinary performances like last night’s 31-point comeback by the Clippers on the road. But more times than not, games are won in the margins. A handful of shooters get run off the line and are forced to take long-2’s could be the difference between winning and losing. If Game 1 is any indication, this is going to be a grinding seven game series and every little thing counts.