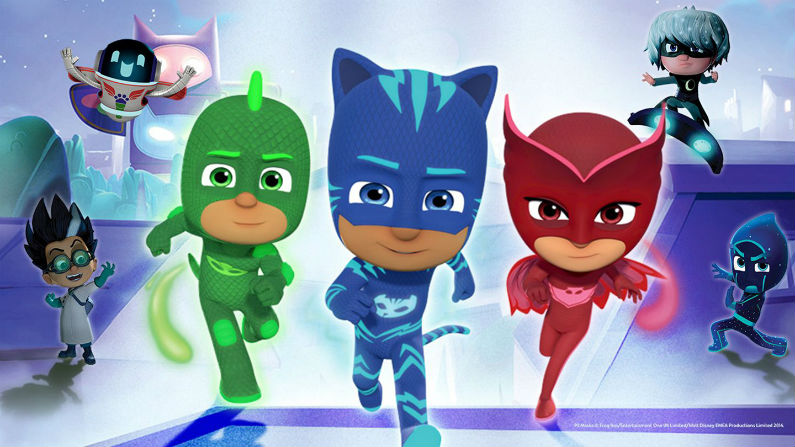 One of the world’s most popular crime fighting trios is coming to Boston like you’ve never seen them before. This month, Catboy, Owletter, and Gekko will be live on stage at Boston’s own Boch Center in PJ Masks Live!. If someone you know loves these adorable masked superheroes, we’ve got a great deal for you. Boston on Budget readers can score tickets at a discount of nearly half-off. Get them before they’re gone!

PJ Masks Live! welcomes all of the familiar faces, masked or unmasked, from the popular children’s television franchise. PJ Masks is based on a series of French children’s books but is best known for the animated series which originally aired on Disney Junior. The series follows three six-year-olds who are normal first graders by day but by night don masks to become the superhero trio PJ Masks under the alter egos Catboy, Owlette, and Gekko.

Catboy, Owlette, and Gekko are now hitting the stage in a new adventure that will see them jumping, flipping, climbing, and singing live on stage at Boston’s Boch Center. This live show will welcome a new pal, PJ Robot, and will see the trio come toe-to-toe with the usual villains Romeo, Night Ninja, and Luna Girl. Fans of the television series will be delighted to hear all of the series’ familiar songs as well as some new numbers crafted specifically for this live adventure.

Tickets to this one-of-a-kind PJ Masks adventure start at around $55, but BOB readers can get them for as low as $30 through Goldstar.com while they last. Don’t let this deal slip away! Sign up for a free Goldstar membership using any email address or Facebook account and start taking advantage of exclusive deals like this one.

PJ Masks Live! will be performed at the Wang Theatre at Boston’s Boch Center on Friday, April 26, Saturday, April 27, and Sunday, April 28. A full list of dates and times can be found here. For more information visit the Boch Center’s website.

The post See Catboy, Owlette and Gekko Save the Day in PJ Masks Live! appeared first on Boston on Budget.