As we hurtle forth through the twenty-first century, it feels like every day our relationship with technology becomes less “Netflix and Chill,” and more “It’s Complicated.” Will a robot take my job? How much does Facebook really know about me? The arts community is no exception to this reality, with people now able to make and share a copy of your intellectual property faster and more easily than ever before, often times without credit. It’s kind of overwhelming.

Then again, aren’t we supposed to share? Is that not on the syllabus of every preschool ever? Could it be that this low barrier to entry really just means more people in disparate communities, far corners of the world, and those with limited resources are now being exposed to culture and ideas previously inaccessible to them?

Honestly — I don’t have all the answers. What I can do is put focus on some of the positive side of things. Technology, specifically Instagram, has had a positive effect in this case, helping bring together six different artists from different parts of the world to celebrate this very idea. The majority of them have never met in person, and yet they are all able to bring their work together in a cohesive exhibition titled #stitchers at Gallery 263 in Cambridgeport. Despite the shared medium of embroidery, each artist’s style is unequivocally unique, and all serve to “challenge the notion of embroidery as a pastime craft.” 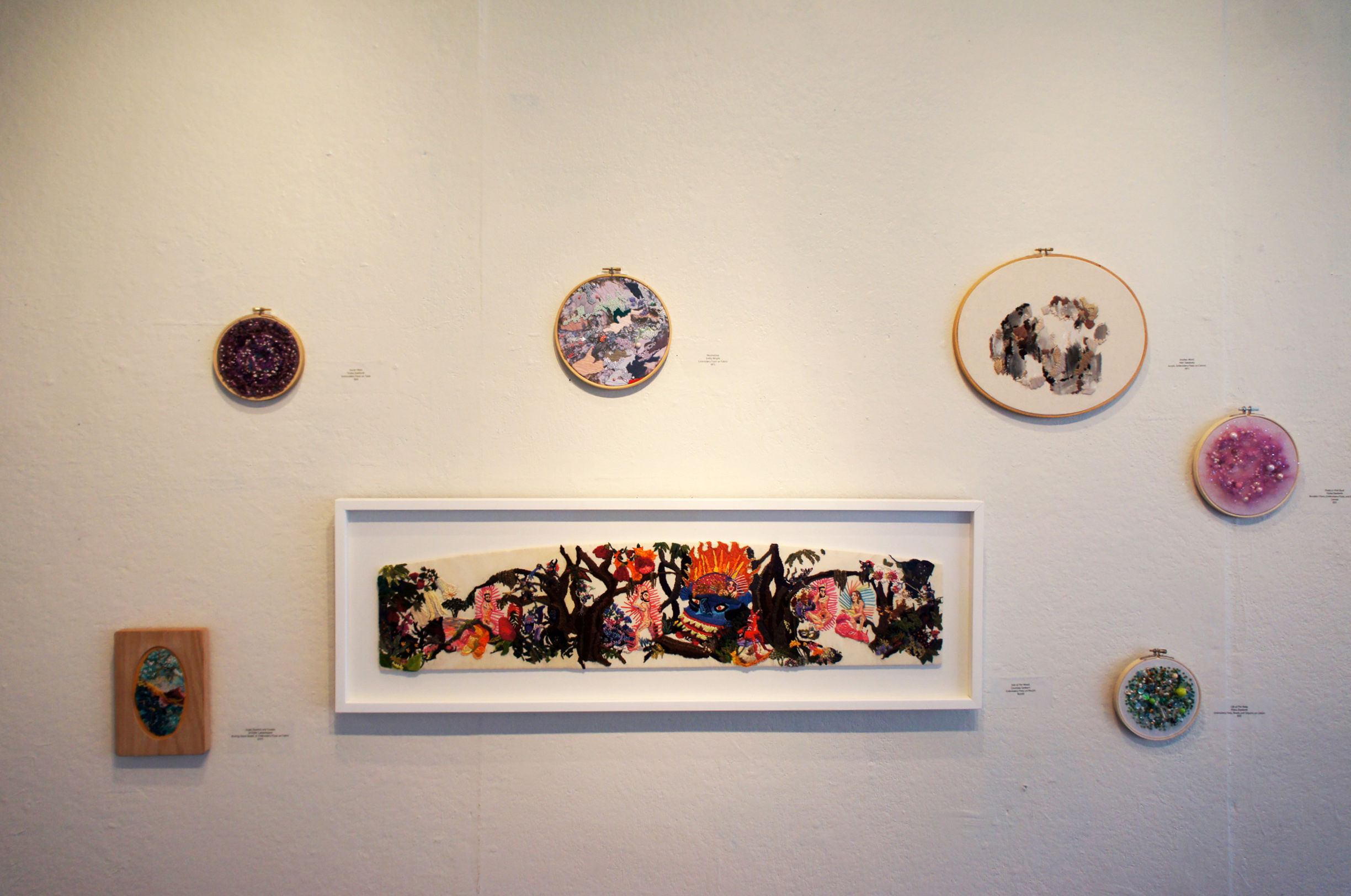 Courtney Sanborn’s piece The Wedding Embroidery (2018) is one of the larger scale works in the gallery, and stands out as such. The piece celebrates the joy of a wedding ceremony through various pictures and symbols. There is an emphasis on food, most notably the pear which can symbolize prosperity and health with regard to coming union (i.e. the pair-ing, lol). Other foods featured include rich desserts and a taco bar (yes, please). Along with the positive, playful imagery, Sanborn uses a bright and varied color palette that imparts a clear sense of celebration and very literal images which display a clear technical competency. 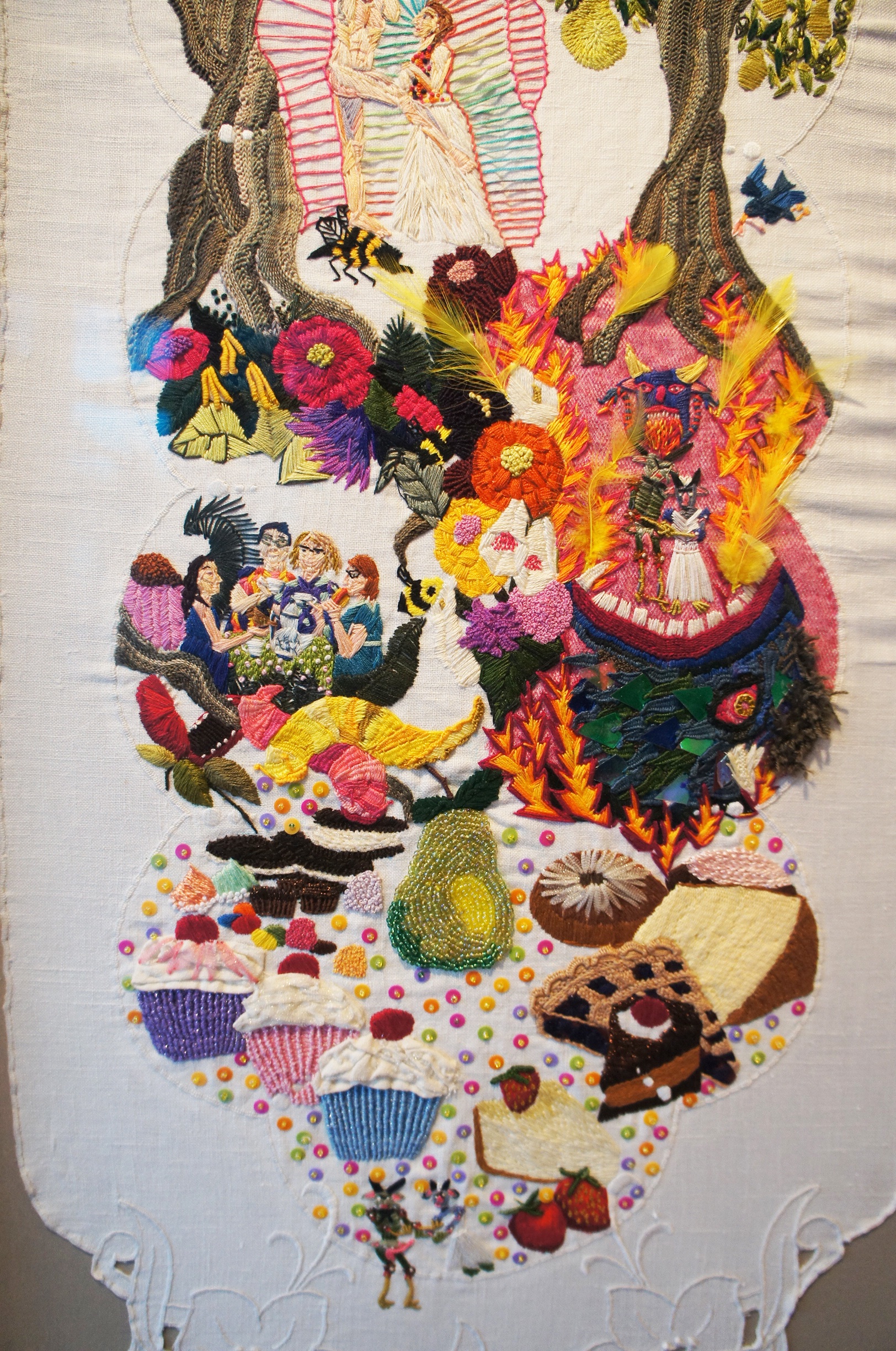 If we’re moving from most literal to most abstract, Hannah Ferrante could probably be considered next on the spectrum. Her approach is minimalistic, with no more than two or three colors in each piece and a simpler approach to the stitches and even the canvasses used. Valley No. 7 (2018), which depicts a human torso emblazoned with a smiley face icon, uses white thread instead of yellow for the face. The choice to let it blend in as opposed to pop with the typical yellow feels deliberate. Ferrante’s minimalism serves her approach to “investigate the line between craft and fine arts, and the gender assumptions attached to fiber mediums.” By limiting what she shows us, Ferrante leaves more room for us to draw our own conclusions and take any biases (gender or otherwise) out of the equation.

One of my favorite pieces in the show is Soccer Mom (2018) by Trisha Danforth. It’s simple in terms of composition and could almost pass as a circular swatch of purple carpet. Yet somehow all I could see was a sweater on a rainy morning, in that deep color of royals and hysterical indignation. The term “soccer mom” in and of itself is tongue in cheek—this playfulness is a hallmark of her style. Danforth’s work also makes liberal use of mixed media, incorporating elements like beads and yarn, which supplement the joyful nature of the work.

Meri Sawatzky is unique in that her style is the most varied of the artists in the show. Some of the work was very abstract, while others like Cellular Reconstruction (2018) look almost like the detailed work of a science textbook. This lines up with her mission to “create imaginative mixed-media embroideries playing with the fine line between dreams and reality.” 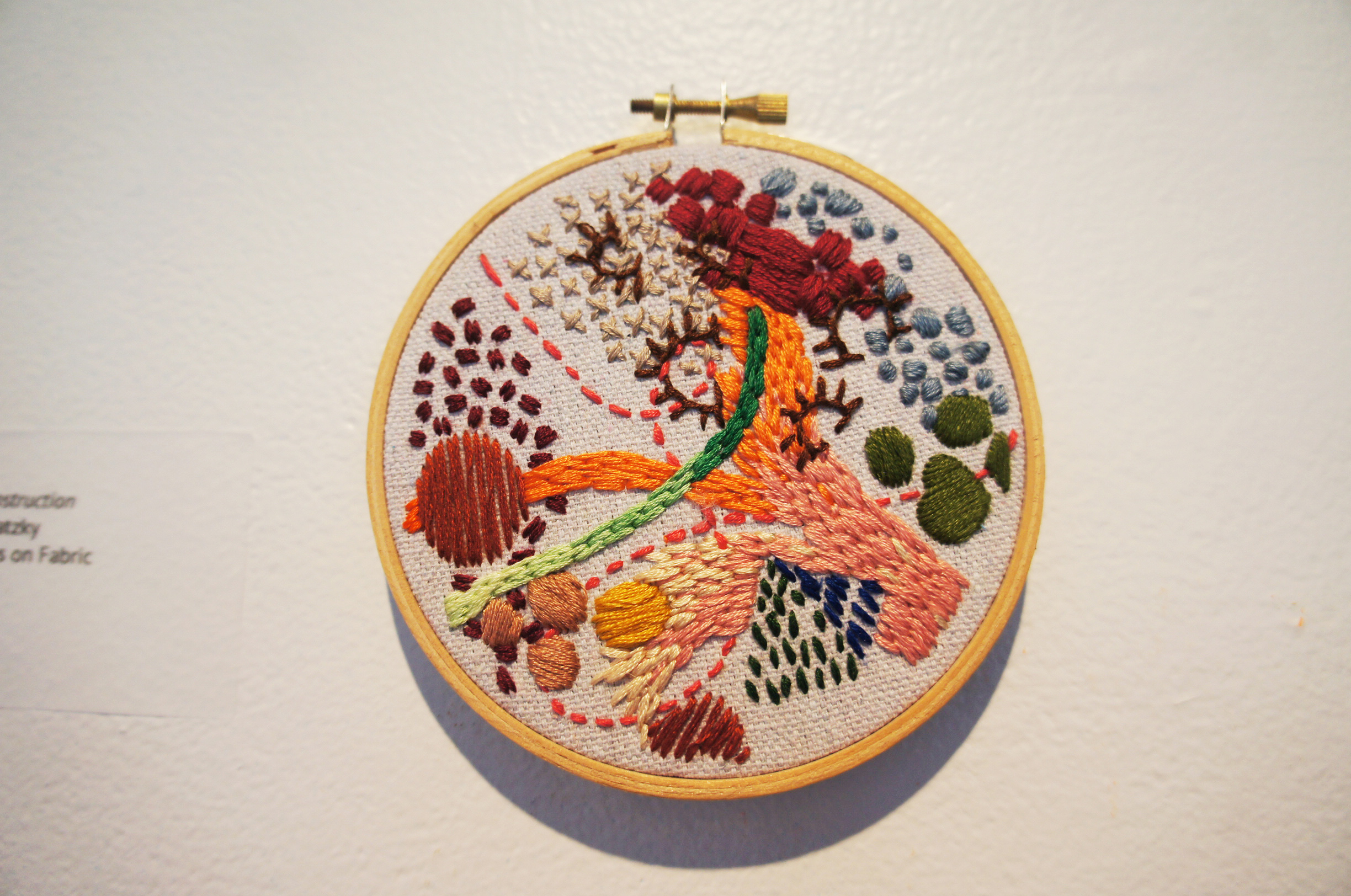 “Texture, dynamic compositions, and memories are the driving force behind my creations.” Jennifer Lamontagne achieves this by incorporating multiple technical elements into her works. From sharp attention to color, to exploring a variety of stitches, to including beads and other media, Lamontagne goes beyond the traditional limitations of the medium. The part that stood out to me was the frames she used — circular pieces of wood as opposed to the traditional embroidery hoop. This extra detail adds power by continuing to show what is possible in what is otherwise considered a traditional practice.

The final artist included in the show is Emily Wright. Even though her works were some of the most abstract, the influence of water and the ocean are readily apparent. Wright leverages the mixing of media in an orderly method, creating pebbles and plants from beads and fabric. Other works looked like the ocean from a birds eye view, with ridges and lines detailing the world below. The stitching is important, but the defined physical textures inherent to embroidery are the main focus of her work. 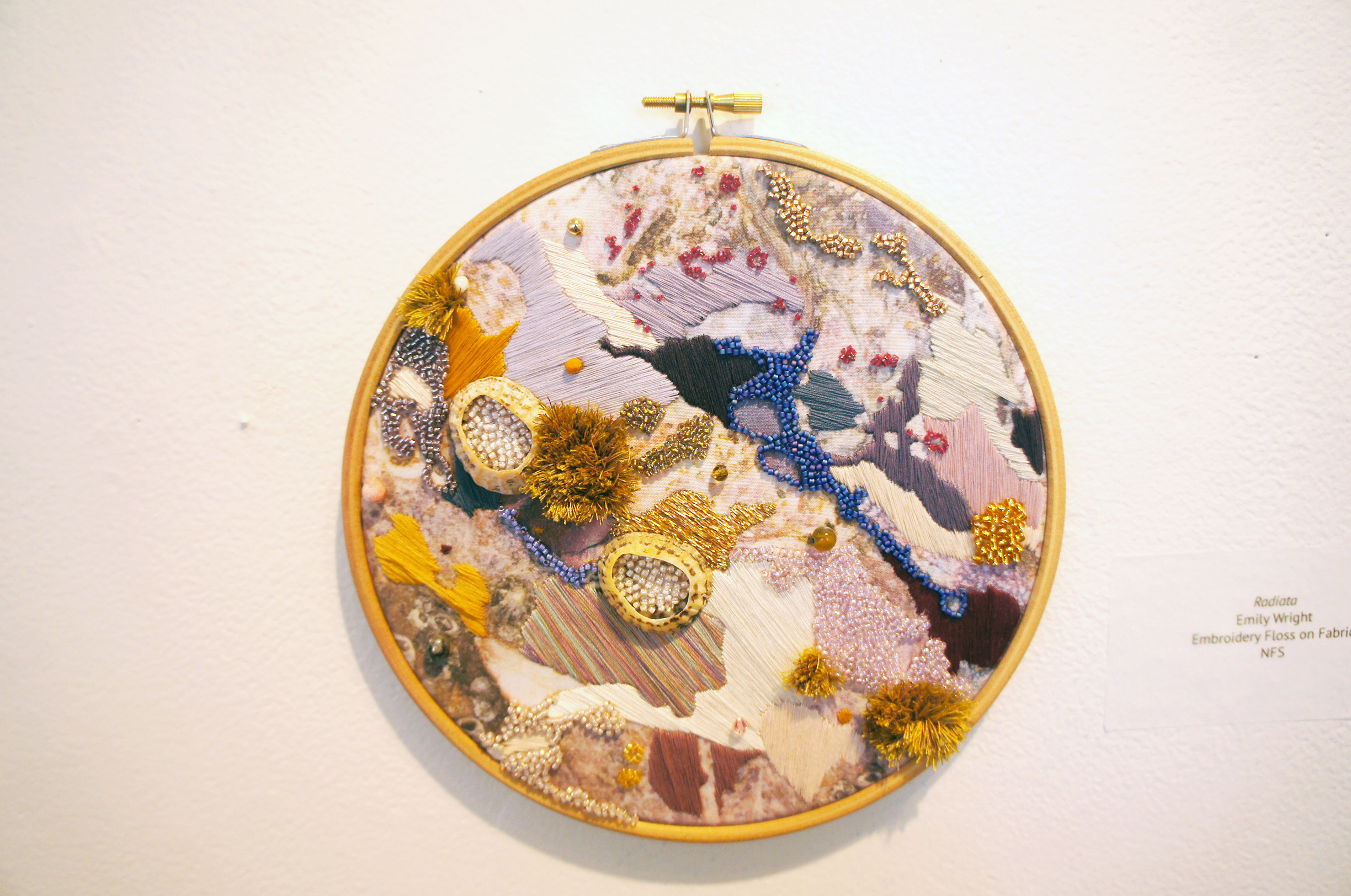 While I began by highlighting the differences in styles, the more I think about it, there were many similarities, too. Whether it was the (mostly) uniform circular canvases, or the forced grid on which one has to stitch, even the wildest pieces had a certain kind of order to them. Each artist came to the work differently, but they all started from the same place: needle, thread, and canvas.Is this canvas? Or cloth, fabric? As the world rapidly changes around us, bringing some of us together and driving some of us apart, it’s important to remember that whatever unfolds, we’re still all humans. That’s our shared starting place. And most of the time the things that come into our lives aren’t good or bad, but depend on how you interact with them.

Each artist has their own Instagram (obviously), but I recommend trying to see the pieces in person, if not only to support the gallery but also to appreciate the extra dimension of texture that’s inherent to this style of art. You can find the show #stitchers on display at Gallery 263 through April 20th.

The post WENT THERE: ‘KNOT’ YOUR AVERAGE EMBROIDERY AT GALLERY 263 – #STITCHERS appeared first on BOSTON HASSLE.