I am a big fan of all things cold wave, dark wave, synth wave, post-punk, whatever you want to call it, I like it. Which is why I’m talking about Boy Harsher, they’re right at the top of the list when it comes to cold wave revivalists. Alongside groups like The Soft Moon, and Lebanon Hanover, Boy Harsher, otherwise known as Augustus Muller (synths) and Jae Mathews (vocals) has been cultivating a solid fan base since the early 2010’s, which saw the start of the revival’s emergence as a genre.

Their debut album Yr Body is Nothing, released in 2016, made waves in the scene for its gloomy aesthetic, but simultaneously dancey, and almost upbeat melodies.This years release, Careless, is much in the same vein, but more polished, without sacrificing the stark minimalism that made Yr Body is Nothing so great a few years back. Boy Harsher proves on Careless that they aren’t merely revivalists, considering them such by extension does them a tremendous disservice. A revivalist, in any respect, simply rehashes, I.e. your Interpol/Joy Division meme. Boy Harsher proves to be more than this, and a significant mark on the coldwave continuity. When listening to Careless you aren’t by any means presented with the minimalism you’d hear on Coldreams, or even an early Cure track, but a reminder of how much the genre has evolved. We are given a warm reminder that cold wave isn’t afraid to adapt to a more modern sound and in doing so remain just as stimulating a listen. 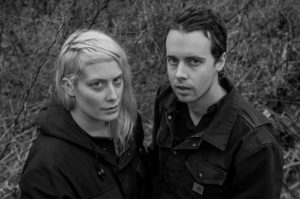 Track wise, fans will be satisfied, but not necessarily shocked, and newcomers with a liking for their instrumentals downtrodden, and infectious are sure to get their fill. Favorites include “Lost”, with a change of pace of uplifting synths, a punchy drum beat, and Mathews beautiful vocals, and lyrics exploring painful memories of a past relationship. “Come Closer” also makes for a good time instrumentally, making use of primal and irresistible sounds, as well as fragile singing, that feels almost Alan Vega-esque.

Overall, nearly every track on Careless is easy to get into, Mathews and Muller know their sound and know it well. It’s hard to not dance, or at least fantasize about dancing to this music.

That being said, it would have been nice to hear Boy Harsher, switching up the formula a bit more, and including the experimentation heard on “Come Closer”. The album as a whole can feel bored at points, even with my own favoritism for not only the duo, but the genre as a whole.

Regardless, Careless many accomplishments still hold true, that is cementing Boy Harsher’s place as more than a footnote in synth-pop, and also adding an album marking a solid progression to their discography.