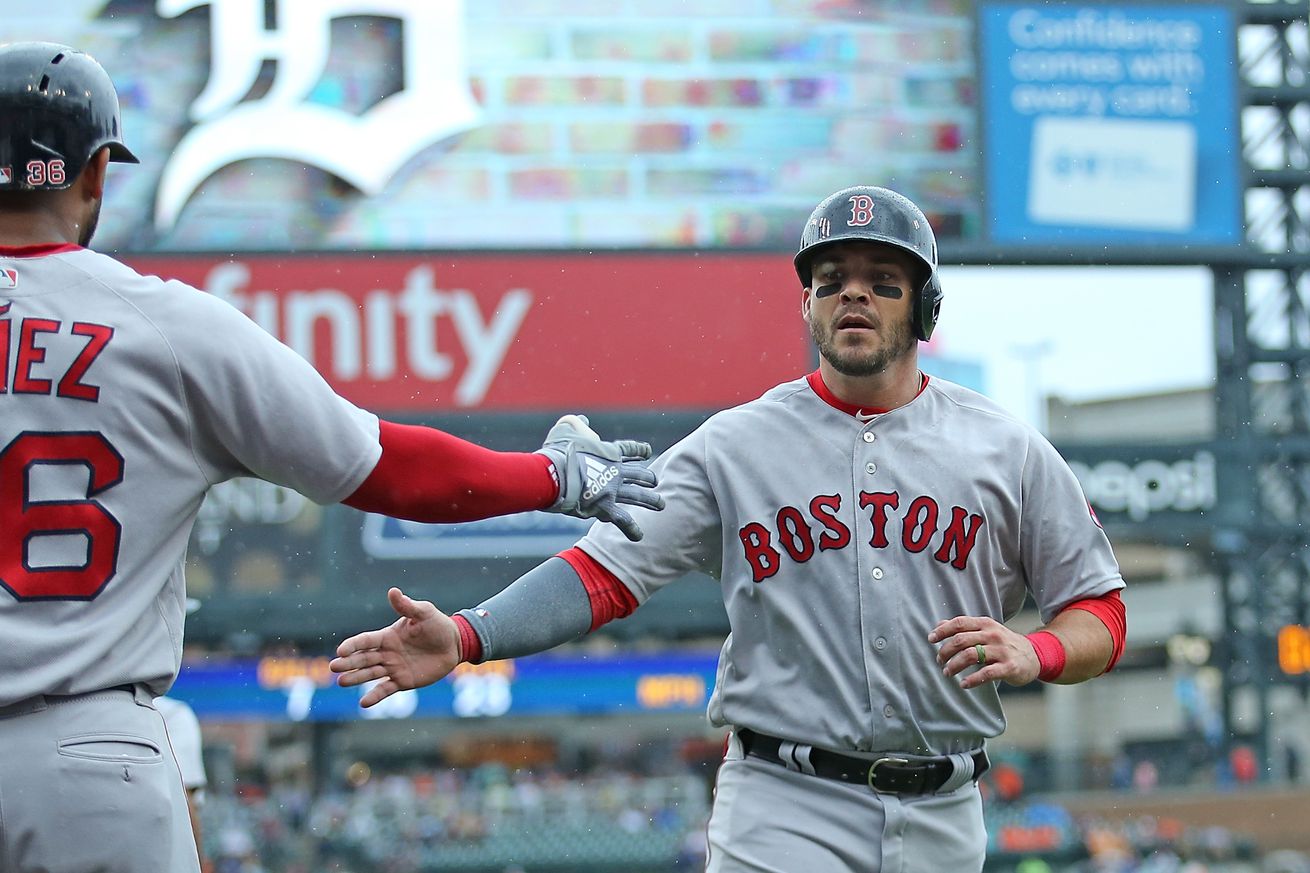 The Tigers are playing .500 ball right now, but they are firmly in a rebuilding stage for the franchise as the continue to implement younger players and prepare for their next cycle of contention that is still a few years out.

Down a bit. The Tigers are coming off a series victory against the White Sox in which they took three of four from their division rivals, but things were rough before that. They had lost their previous three series in a run that included just one win over a seven-game stretch.

It’s time for Sale to turn things around. He’s slowly been trending up since the start of the season, though he started so low that he’s still not close to the top of his game. That being said, the stuff really started to charge back in a big way his last time out and he also has his personal catcher in Sandy León back. Now, it’s just about getting the command back. Sale isn’t getting the whiffs we are used to and is missing almost all of his spots right now. The Tigers don’t quite have the talent level of the Yankees, even with all of the injuries in New York, but they are familiar with the Red Sox ace and have a lot of right-handed bats. In other words, don’t take them lightly because they will punish bad pitches if Sale fails to hit his spots again.

Through his first four starts of 2019, Boyd is looking like a totally new man this year. The southpaw pitched to a 2.96 ERA in 24 1⁄3 innings and his peripherals are even better. He’s never struck out a batter per inning over his career, but right now he’s setting down a whopping 13 batters per nine and has two double digit strikeout games under his belt already. He had one all of last year. In addition to the strikeouts, Boyd has allowed just one home run after giving up 27 in 2018. It’s not unreasonable to think he’s due for regression given his track record, but he looks every bit as good as his numbers so far. The Red Sox struggled in two games against Boyd last season, scoring three runs over 11 1⁄3 innings with 12 strikeouts and six walks. The southpaw has been mainly a two-pitch pitcher this year with a low-90s fastball and a slider as well as a few other offerings he’s thrown less than eight percent of the time each.

Officially, the Tuesday for the Red Sox starter is to be decided, as this was supposed to be Nathan Eovaldi’s scheduled start. The righty was, of course, placed on the injured list this past weekend and now Boston is looking for a replacement. It seems all but certain, though, that this is going to Hector Velázquez. He’s been the spot starter all year so far, and he’s pitched relatively well with a 2.84 ERA. The peripherals have never matched up with the results here, and he’s unlikely to go more than five innings, but Velázquez was always going to get this start even if they have other more exciting potential options.

Turnbull does not have much experience under his belt with less than 40 inning to his name. The righty made his major-league debut last September and has opened the year in Detroit’s rotation for 2019. Already in his age-26 season, he’s had a solid start to his year with a 3.43 ERA, over ten strikeouts per nine innings and a solid walk rate of three per nine. He does have a bit of fly ball tendency that can be taken advantage of, but he’s been solid at keeping the ball in the yard early in the year. He’s coming off his best start of the year, too, in which he allowed one unearned run over six innings against the Pirates. This will be Boston’s first look at Turnbull, who features a pair of low-to-mid-90s fastballs as well as a slider and a curveball.

In his last start in Tampa Bay, Rodriguez didn’t exactly pick up where he left off after his brilliant outing against the Orioles, but there were some encouraging signs here. The lefty was sort of walking a tightrope all night long and he struggled mightily with his efficiency early on. However, he avoided the kind of implosion he has given into in the past and also got into the sixth inning, something that seemed nearly impossible after his first inning. We still need to see more consistently from Rodriguez, but there are some strides being made even if they can be hard to see.

About a half-decade ago, Ross looked like one of the more underrated top-of-the-rotation arms in baseball. Injuries have ravaged the righty’s career since 2015, though, and he’s bounced around the last few seasons trying to get his groove back. His journey has brought him to Detroit for 2019, and he’s been good, at least depending on where you look. Through four starts he has a very solid 3.38 ERA and he’s getting the ground balls he got at his peak. However, he’s also striking out fewer than seven batters per nine while walking more than three. It certainly seems from the outside that Ross is about ready to see a whole lot of regression, and possibly all in one start. The Red Sox will look to make sure they are responsible for it. Boston saw Ross way back in 2013 when he came out of the bullpen for 1 1⁄3 innings. Ross is a three-pitch righty, offering a fastball, slider and cutter with none of his pitches averaging over 90 mph.

Porcello had been easily the most disappointing starter in the Red Sox rotation heading into his last start, but he finally started to take a step forward against the Rays. As with Rodriguez, there is certainly more work to do and Porcello was hittable at times, but he was also pounding the strike zone. Through his first three starts he was oddly struggling with his command and walking far more opponents than we’ve grown accustomed to seeing from him, but he only issued one free pass over the weekend. Now, the next step is to continue to throw strikes but make sure those strikes are closer to the edges of the strike zone. One step at a time.

Things have not gone well for Zimmermann and the Tigers since he signed a five-year, $110 million deal following the 2015 season, to put it lightly. The former National has been a home run machine since getting to Detroit and his strikeout rate hasn’t risen as the league-wide rate has been trending up. He’s off to another rough start this year with a 4.94 ERA over his first five starts with fewer than seven strikeouts per nine and five balls leaving the park already. After allowing only one run over his first two starts combined, Zimmermann has allowed exactly five runs in each of his last three outings. The Red Sox haven’t seen Zimmermann since 2017 and they struggled there, posting a .693 OPS in two games against the righty. He offers a low-90s fastball as well as a slider and a curveball.

Miguel Cabrera is a no-doubt future Hall of Famer, but he’s also firmly in the downswing of his career. His 2019 is off to a brutal start as he’s striking out a ton and hitting for virtually no power. He is still drawing walks and turning balls in play to hits, though.

Nicholas Castellanos had a breakout in 2018 thanks to his consistently hard contact starting to fall in at a high rate. That can be tough to predict, but few batters consistently crush the ball like Castellanos. His power is down quite a bit starting 2019, though his hard-hit rate is not.

Niko Goodrum is off to a hot start in the middle of Detroit’s lineup, as the first baseman is hitting for big power and drawing a ton of walks for the Tigers.

Jeimer Candelario showed some flashes for Detroit last year, but the young third baseman is struggling this year as he’s striking out more than you’d like and combining that with a big drop-off in power.

Josh Harrison has been the fourth-worst qualified hitter in baseball so far this year, slightly better than Jackie Bradley Jr. Harrison isn’t walking, is striking out at a league-average rate and hitting the ball with almost zero authority.

Grayson Greiner is going to stand out because he’s a 6’6” catcher, which is extremely rare. His performance has not been as impressive as his height, though, and he’s combing a low walk rate with close to no power.

Dustin Peterson is being forced into more regular playing time due to injuries and he has a walk rate under three percent, a strikeout rate over 33 percent and an ISO under .060. Not ideal.

Gordan Beckham has a .375 ISO, which I’ll go out on a limb and say isn’t sustainable.

JaCoby Jones struggles to get on base, but when he does he can make a real impact with his legs.

Shane Greene is an underrated arm at the back of this bullpen and could be a midseason trade target for the Red Sox this summer. He doesn’t get a ton of strikeouts but when he’s at his best he is tough to square up and he gets a ton of ground balls.

Joe Jiménez was the Tigers All-Star representative last year and has a huge amount of talent in his arm. Now, it’s just a matter of honing in that potential. He’s struggling with that step to start 2019 with six walks in 7 2⁄3 innings.

Daniel Stumpf and Blaine Hardy combine for a solid combination of southpaws in this bullpen. This will be good with a Red Sox lineup featuring Andrew Benintendi, Rafael Devers and Jackie Bradley Jr.

Michael Fulmer has been disappointing and trending in the wrong direction after wining the 2016 Rookie of the Year, and now he’s missing the entire 2019 season following Tommy John surgery earlier this month.

Christin Stewart was off to a hot start but is on the shelf with a quad strain right now. He shouldn’t be out for too long, but he’ll miss this entire series.

Jordy Mercer is a defense-first shortstop, and there’s a chance he’ll be activated off the IL at some point this week.

Matt Moore looked good in his first two starts this year for the Tigers before tearing his meniscus. The surgery will keep him out the rest of the season.

Gregory Soto was suspended 20 games for conduct detrimental or prejudicial to baseball, but no one knows what he actually did.

The weather is not looking great at Fenway this week, particularly early. There is rain in the forecast almost all night on Monday, putting the opening game in real jeopardy. Things do appear as though they’ll clear up after that, though. Don’t expect temperatures to get too high up there, however.