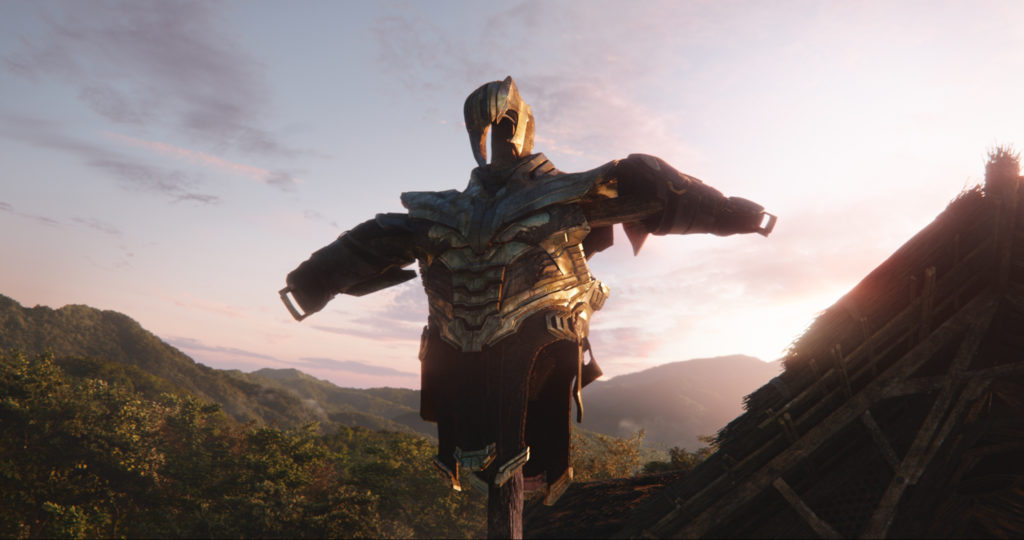 What are you hoping to get out of this review?

That’s a rhetorical question, obviously– we’re not actually having a conversation, after all– but I’m genuinely curious. More than perhaps any film in recent memory, I’d imagine the vast majority of American audiences already know full well whether they’re going to see Avengers: Endgame or not. It is, after all, essentially the conclusion to last summer’s Avengers: Infinity War, an absolutely gargantuan blockbuster which ended on an instantly iconic cliffhanger (which I suspect I’ll be touching on in greater detail, in case you’re somehow still dodging year-old spoilers). If you saw Infinity War, you’re almost certainly planning on seeing Endgame, and if you didn’t, you probably don’t care. What’s more, as a critic, I am honorbound to avoid spoilers; I can describe the shape and the mood of the film, but I’m going to remain hazy on the details. Even in these polarized times, few forms of writing are destined to change fewer minds than reviews of Endgame.

All that being said: whether you’re an avowed Marvel fan or not, Avengers: Endgame is almost certainly better than you expect, and far more satisfying and entertaining than its predecessor.

Don’t get me wrong, I enjoyed Infinity War as much as the next person. I’ve made no secret of my unironic fondness for the Marvel Industrial Complex; as pure popcorn entertainment goes, their output is some of the most consistently entertaining and well-crafted ever produced, and even their slightest efforts make for perfectly watchable TV reruns. Yet Infinity War always felt like more of a Mythology Episode than a standalone piece of entertainment, and for all its grandiosity and epicness, I’ve never felt the inclination to revisit it. In a very real way, it wasn’t a movie, so much as An Event. 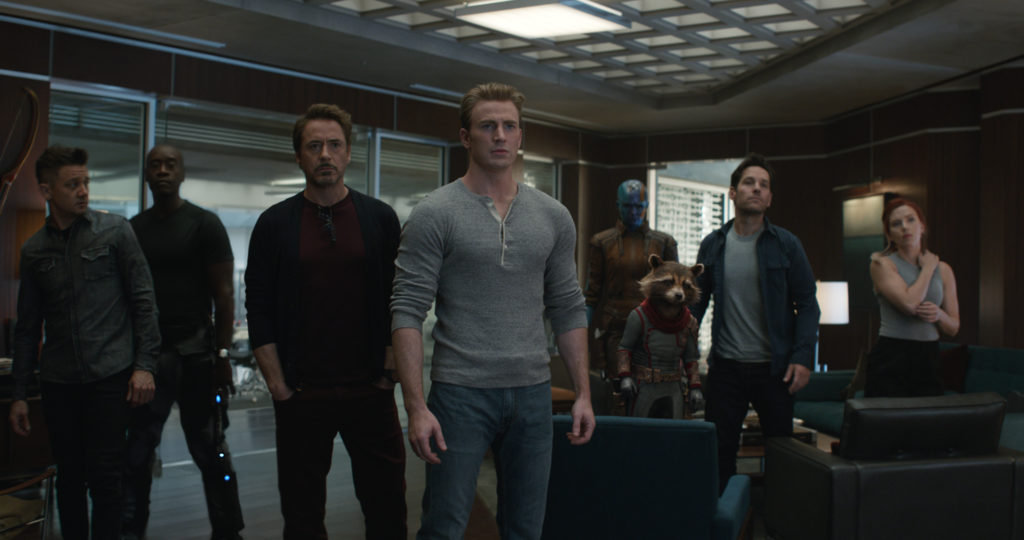 This is the REDUCED VERSION of the Avengers cast.

For much of its first act, Endgame feels like a continuation of Infinity War, with the remaining heroes (and, you know, inhabitants of earth) coming to terms with the effects of Thanos’ snap. In these moments, the characters grapple with the real-world consequences of their super-heroics in a way that feels much more grounded than typical Marvel fare (and with far less bombast than Snyder-era DC). But when the heroes get back on their feet and start trying to put things right, the movie abruptly shifts gears, and becomes something far more fleet, clever, and funny than I expected going in. Endgame’s mammoth three-hour running time has been much commented upon, but it feels justified by the fact that it’s more or less packed with ideas. Unlike many modern blockbusters, which are streamlined within an inch of their life to fit a tried-and-true formula, Endgame is a movie of scenes and one-offs and bits which more or less stand on their own before moving on to the next one. It reminded me a bit of the early blockbusters of Spielberg and Lucas; as a kid, I’m not sure I could have concisely described the plots of Star Wars or Raiders of the Lost Ark, but I would have talked your ear off about The Cantina Scene or The Boulder Scene or The Trash Compactor Scene or The Face-Melting Scene.

Of course, this episodic nature is partly due to the fact that, even after the Snap, Endgame prominently features approximately five hundred characters. In 2012, The Avengers was hailed for successfully juggling six superheroes; Endgame needs to do justice to those same heroes, plus such disparate characters as Rocket Raccoon, Captain Marvel, and Ant-Man, plus a host of supporting characters from throughout the studio’s 11-year run (including a handful who I promise you are not expecting). The truly remarkable thing about the Marvel Cinematic Universe is the fact that it places far less stock in action and spectacle than in its characters. What draws people back to two or three Marvel movies a year isn’t the punch-ups and shoot-outs; it’s the chance to check in on their big-screen friends, who have been allowed by the shared-universe business model the chance for more honest-to-god character development than just about any action heroes in history. A few of these characters took a while to click (it took Joss Whedon to figure out what to do with Black Widow, Shane Black to crack War Machine, and a full four films to realize Thor works best as a comedic figure), but all have become something like family to summertime moviegoers. Here, Marvel cashes all their chips, providing payoffs to relationships and character arcs they’ve been building for years. 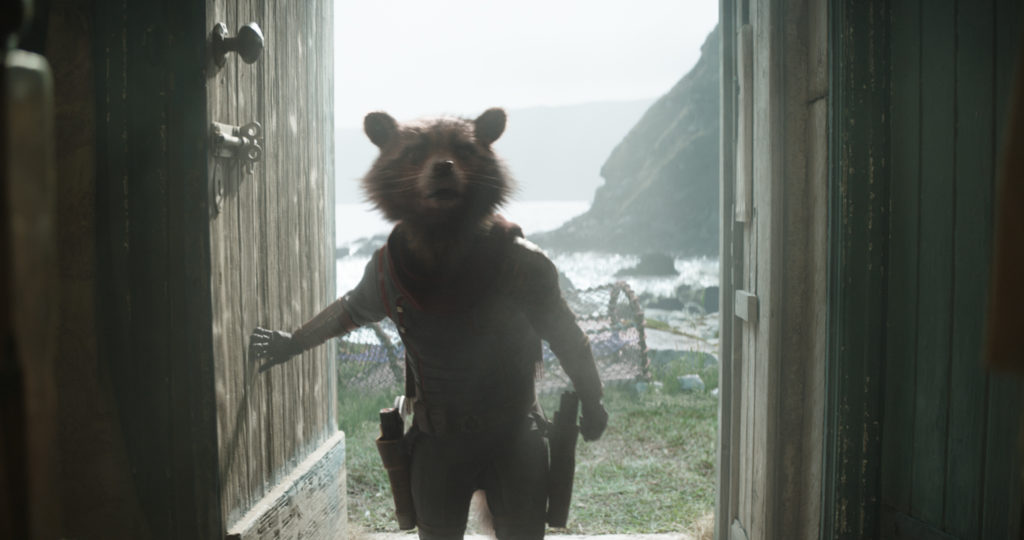 AVENGERS: ENDGAME includes both sobering meditations on death and loss, and a talking raccoon who wears clothes.

Endgame has been described in the run-up as a “series finale” to the Marvel Cinematic Universe. This is obviously slightly hyperbolic– they’re going to keep making these movies either until they stop making money or the entire studio system collapses– but there is a real sense of finality to many of its best-loved characters’ arcs. One of the most fascinating differences between superhero comics and superhero movies is that actors age and contracts expire, meaning that, at some point, franchise owners will either need to recast or come up with real, concrete endings for their characters. We’ve seen a few examples of this in recent years, notably The Dark Knight Rises and Logan, but those were cappers to a single trilogy and an iconic performance across a wildly scattershot series of films, respectively. Endgame feels like something we haven’t seen before: several endings at once, each of which is given weight and meaning. Some of these endings are happier than others (this is a franchise partly built on a Joss Whedon engine, after all), but all are satisfying and felt. I attended an advance press screening rather than my customary suburban multiplex experience, but even in this somewhat restrained environment there were a number of audible sniffles and cheers.

Returning to my opening question, if you’re reading this review, I suspect you are planning on seeing Endgame, and are looking for some context to manage your expectation. To you, hypothetical reader, I say this: Avengers: Endgame succeeds on the levels I imagine you hope it will, but it also succeeds in breathing life, vitality, and playfulness into something that could have easily been an exercise in franchise-bloat. You’ll shed tears, but just as many of those tears will be out of joy and exhilaration as out of Big Feels (as the kids say). And if you’re an MCU skeptic reading this to try to figure out what the appeal is: Marvel makes movies which are, if occasionally safe and formulaic, consistently funny, well-acted, and surprising. Avengers: Endgame represents the best of these attributes, and a singular achievement in pop moviemaking. But, uh, maybe watch some of the others first.

Opens everywhere Friday, 4/26 (though the Hassle recommends the Capitol Theatre or your local independently-owned multiplex)