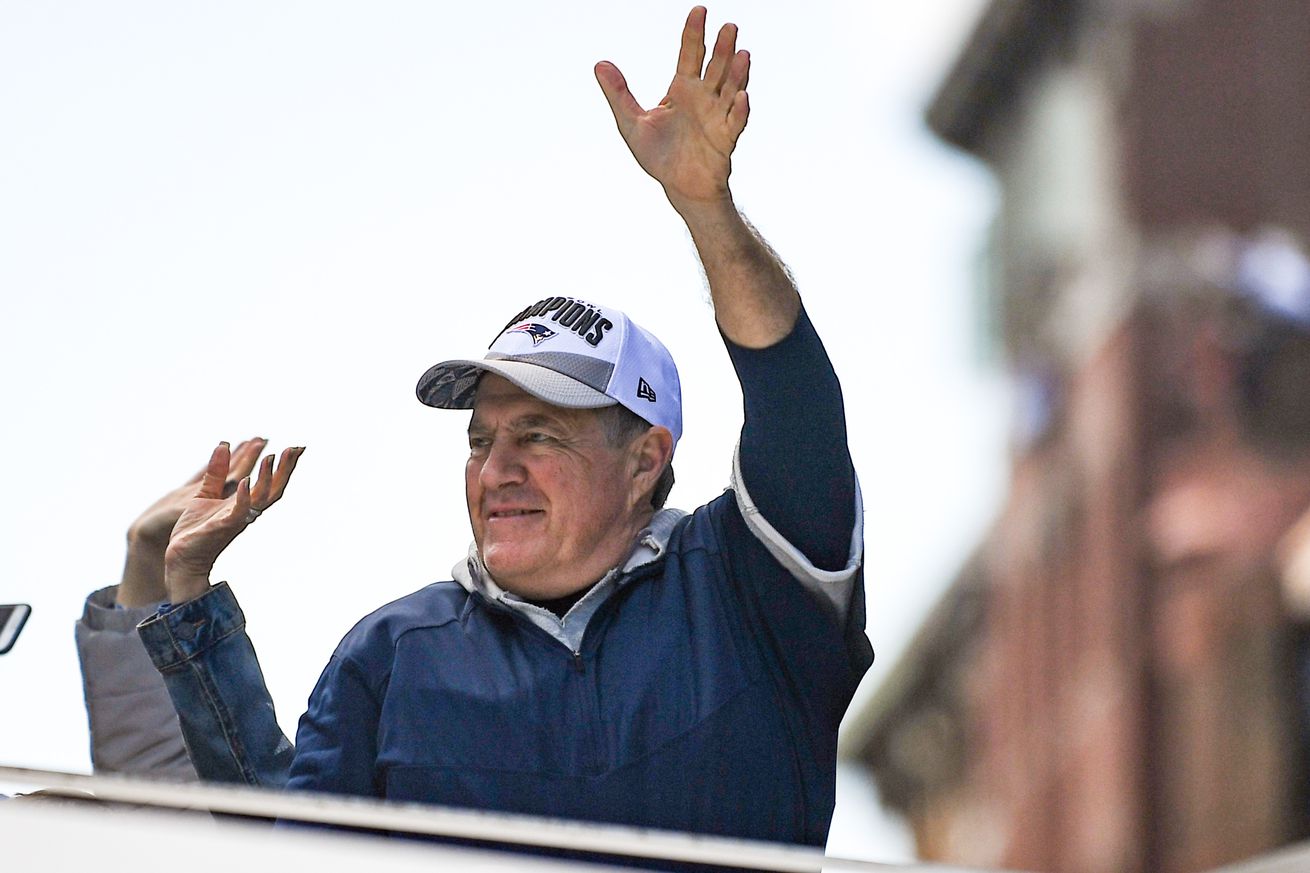 The Pats Pulpit staff weighs in on the team’s options.

Happy draft day, folks! The first round of the NFL’s annual college player selection meeting — click here for all you need to know about it — will take place today and the New England Patriots have plenty of options at the end of round one: they have the deep roster to go after the best available player, the perfect spot to trade down to acquire additional picks, and the ammunition to move up the board for one of their targets.

That’s what the reigning world champions could do, but what should they do? Pats Pulpit’s staff has some answers to this question.

Teams like first round picks because of that sweet, sweet fifth-year option — and the Patriots should take advantage of this and swing a trade. Think about it: the draft is deep in the second round, and New England might also be able to pick up an additional high choice for next year (and a stronger quarterback group) by moving down today. Of course, it always takes two to tango so if a trade-down doesn’t materialize I would go for either a player like defensive tackle Jerry Tillery or offensive lineman Chris Lindstrom.

I think the Patriots should take the best lineman that’s on the board. If that’s an offensive lineman, like Dalton Risner or Greg Little, that’s great. If it’s a blue chip defensive lineman like Jerry Tillery, that’s great, too. Games are won in the trenches and there are plenty of receivers that will be available in the second and third rounds. What do I think will happen? Get ready for another defensive back in Foxboro…

I’d love to see the Patriots package their first rounder and one of their seconds to move up and grab an EDGE defender, especially if there’s a run on other positions and someone like Josh Allen falls to them in the middle of the round. That said, I look forward to welcoming an interior offensive lineman or a DB onto the team with open arms.

No. 36 overall is the highest the Patriots have driven for a wide receiver since Bill Belichick took the keys. But if New England’s war room stays parked at No. 32 overall — and if the D-line likes of Clelin Ferrell, Jerry Tillery and Dexter Lawrence are off the board — it might be time to shift gears. Ole Miss’ A.J. Brown isn’t a shiny hood ornament of a wideout. He also didn’t play tight end at Iowa under Kirk Ferentz. That’s all right. There’s a translatable, big-slot game with Brown that I could see New England valuing more than most at his position.

Since all of us have been Mossed by our own draft predictions vs. what Bill actually thinks is important year after year, here’s my best guess at where Belichick’s going to zag when we all expect him to zig:

I’m calling off-ball linebacker early. You’ve seen the difference on this defense with Dont’a Hightower on the field vs when he’s in the tub, correct? For as good as Kyle Van Noy’s become once Bill unlocked his true skills, there’s just nothing that makes a Belichick defense tick like the Hightowers, the Mayos, and the Bruschis. And Jerod Mayo wound up retiring at 30 years old once his body finally realized how brutal making 200 tackles a year and shedding hundreds of blockers can be on a man.

And really, if we’re being honest, there isn’t a single position group on this defending championship team that WOULDN’T be improved with a shot of prime blue-chip talent. Think about it. Yes, even the secondary, especially if the NFL keeps pushing the game towards Madden scoring levels. If that sounds like a Kool-Aid copout, then, well, it wouldn’t be the first time, and it won’t be the last time.

Ideally they go in the trenches with either a quality OT or DT. Players to watch will be Montez Sweat and Dexter Lawrence, both of whom have considerable flags with Sweat’s heart condition (less of an issue than with Maurice Hurst a season ago) and Lawrence having limited pass rush upside. If those guys are available past 25, go get them. Otherwise NE should look at staying put and going after Jerry Tillery, Greg Little, or Kaleb McGary (trade back from 32 if McGary is the target) unless they love A.J. Brown. Brown reminds me of Anquan Boldin a lot as a physical Z/slot receiver who had a knack for getting big catches when it mattered most (ask Cardinals or Ravens fans about that). If the players I all mentioned are gone by 32, Patriots should trade back and try to add a pick for next year (ideally a 1st, would be OK with a 2nd).

As for predictions, I’ll probably never come as close as I did 3 years ago. That was just a lucky guess.

If one of the Iowa tight ends falls into the 20s or so, then I would explore moving up a few spots to grab either Hockenson or Fant. Absent that happening, I think the move is to address either the offensive line or the defensive front. Jerry Tillery, Dexter Lawrence and even Jeffery Simmons make sense on the defensive side of the football, and Dalton Risner or Chris Lindstrom would make sense as versatile players on the offensive line for them at 32. There is value to be had on Day Two at both tight end and wide receiver. I don’t see them drafting a quarterback at 32, even Will Grier. I still think he’d be available for them on Day Two.

Sorry, but I’ve been wrong enough for the year. I’m way ahead of my quota. I will say that if I watch the first round, they’ll trade out of it, and if I don’t they’ll pounce. The first year I missed the first round we got Boomtower and Jones. I’m planning on missing it this year….

Trade up for Clelin Ferrell. He has all the makings of a perfect Trey Flowers replacement, he’s young, and he (should) be available in the range where the Patriots could realistically use their surplus of draft picks to get up to. They can’t leave this draft having made 12 or even 10 picks, and 8 would be a stretch as well. Be aggressive and go get the best fit to replace the star you lost. Otherwise, go get Jerry Tillery or AJ Brown. Same logic applies minus replacing Flowers.

I don’t think the Patriots will be drafting at 32 at all. Either they’ll be trading up for a player they love, or they’ll be trading back for a team to go up and get someone they love. If they move up, my guess is either Hockenson or a defensive lineman like Clelin Ferrell, Montez Sweat, or Christian Wilkins drops to the mid-20s.