In one way, this film tells the story of several days in the life of a British woman in her eighties as she is arrested and questioned about her involvement in espionage during the 1930s and 40s. However, to see the spying as the crux of the story would be negligent.

Red Joan  tells the story of a woman recounting, perhaps for the first time, her youth as a bright scientist who fought against World War II by using her access to information to help level a turbulent battlefield. It also tells a story of love and  loss, as well as forethought and hindsight. Much complexity is held in the 101 minutes of the film, and if it weren’t for the fascinating story, beautiful performances, and a script that allows the audience to uncover the truth with the protagonist, it could have fallen flat. Instead, it keeps our eyes glued to the screen with curiosity and awe.

Bouncing between present day Joan (played by Dame Judi Dench) and young Joan (Sophie Cookson), the story slowly unveils itself to its audience with all of the mysterious music of a Murder She Wrote episode, and the drama and lust of a film noir. I wasn’t sure I would follow well, with a severe lack of European historical knowledge, but the little I know about WWII and the script of this film helped me to understand the major points. Young Joan Smith, a student of atomic physics, becomes close to a Jewish communist named Sonia, and soon falls in love with her revolutionary cousin, Leo.

As Leo and Sonia descend and emerge from the shadows periodically, Joan gets a job with a research lab looking to create an atom bomb for the British government. Much thanks to her, the design and implementation of the bomb is of use to the government, who consents to the United States bombing Hiroshima and Nagasaki.

After being repeatedly implored by her revolutionary lover to sneak information about the bombs to the Russian government via Sonia, and then after seeing the effects of the bombings in Japan, Joan yields. She begins to wear a bug to work and delivers the recordings to Sonia on a regular basis, using her femininity to conceal the recorder and Sonia’s own child as cover for its delivery. 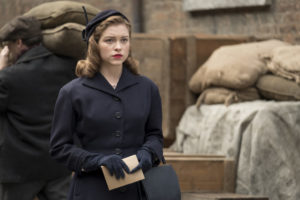 While Joan is clever herself, the trail of information suggests that someone in her office spies for the Russians. This results in her new lover, and her boss, being detained. Joan manages to finagle her future husband free from his cell, but then they must flee.

We do not know much of their lives between then and the questioning which frames the story, but when Joan’s son asks his mother, “How much did dad know?” she answers truthfully, saying “Enough.”

Spy stories are fun, and this one is just the same. Sophie Cookson performs the ebbs and flows of this character beautifully, and Judi Dench is able to express so much despite having few lines in the film. It builds on itself; beginning slow and then revving up with more discovery of true intentions and higher stakes for the characters as it progresses.

One of the more interesting takeaways from the film hits home just after the team successfully tests the atom bomb in New Mexico. Joan’s boss presents the good news to their team, and at that moment, Joan begins to understand the implications. “They will warn them first?” she asks, but the men only discuss how the government will use them. “It could mean the death of hundreds of thousands of people,” she realizes, only to be told that their job is not to worry about the politics but to celebrate the invention. “Leave the politics to the politicians” is the message Joan is told. But she refuses.

This story is an important one for this day and age, where many people are politicized but not so many think carefully about the effects of their actions. How will what you invent today affect humanity tomorrow, or next year? Or 10 or 20 years from now? Will you be proud of who you were, whether a patriot, a spy, or a bystander? Others may either pardon or condemn you, but will you be proud of yourself?