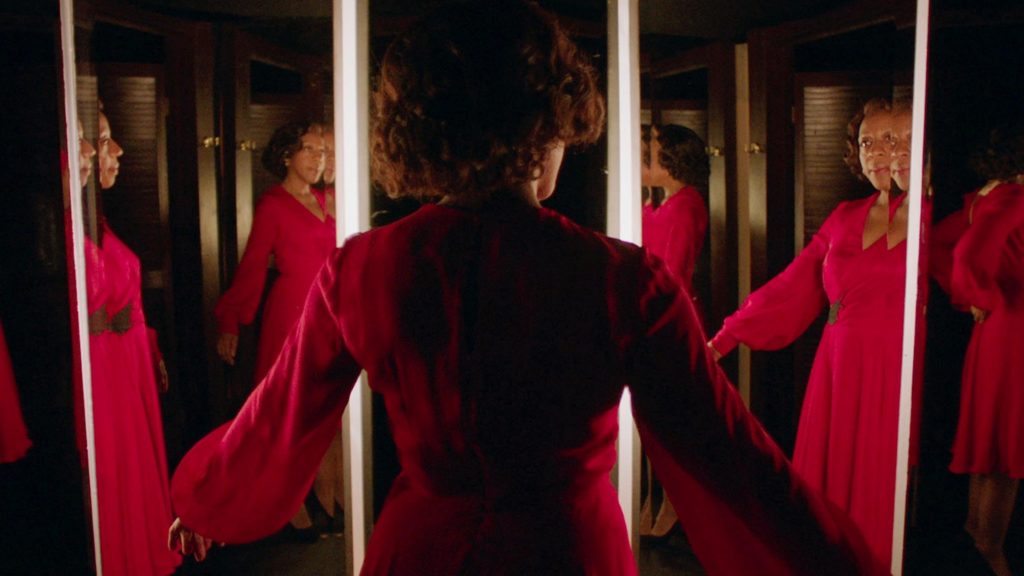 Where do I start with In Fabric? Where could anyone?

As I begin this review, approximately twelve hours have elapsed since the credits rolled and I left the theater. When I got home, I decided the most sensible thing to do would be to sleep on it and start writing with a full battery. On the one hand, this was probably wise– it was well after midnight, and I’d had a long, exhausting day of thinking about The Nightingale— but I’m now realizing the dangers of sleeping on a movie like this. How does one parse a movie so purely dreamlike when it’s been followed by a full night of actual dreams? How does one describe a movie so willfully, perversely indescribable? And how do I do that while also conveying that it may be my favorite movie of the year so far?

In Fabric is the new film by Peter Strickland, the mind behind such cracked genre pastiches as Berberian Sound Studio and The Duke of Burgundy. The plot, in the broadest, most mechanical terms, centers on an ostentatious red dress, seemingly cursed to bring misfortune on its owner. The film follows the lives of two consecutive owners in particular: Sheila (Academy Award nominee Marianne Jean-Baptiste), a working single mother searching the lonely-hearts columns for love, and Reg Speaks (Leo Bill), a singularly dull washing machine repairman on the eve of his wedding. On paper, this sounds like a conventional, if somewhat cockeyed, premise for a ghost story; with a few tweaks, it could fit snugly into the Conjuring cinematic universe. But from the opening moments– a staccato, kaleidoscopic montage of ‘70s department store imagery, set to synths in the warm, ethereal vein of the BBC Radiophonic Workshop— it’s clear that Strickland is simply using this premise to convey something far stranger.

That aesthetic, of cheaply printed, hyper-saturated fashion catalogs, permeates every frame of In Fabric. Seemingly set at an indeterminate point in 1970s London (or, perhaps, a London in which the 1970s never ended), the film’s production design is an expertly curated assemblage of thrift store chic, all chunky plastic and shag in deep reds, greens, and wood tones. The world is recognizably our own, but the locations, costumes, and (especially) the dialogue are exaggerated just enough to be completely alien– but subtle enough that you may do a double-take. Much of the action is set against the backdrop of “The Sales,” a universally accepted term for Christmas bargain-hunting that is apparently this world’s version of The Hunger Games. The epicenter of The Sales is Dentley and Soper’s, a multi-story department store that seems to be a front for some sort of nebulously defined cult. The staff, while friendly and attentive, are just a little… off… particularly the red dress’ primary agent, Miss Luckmoore.

We’re going to stop for a moment here. Miss Luckmoore gets her own paragraph. 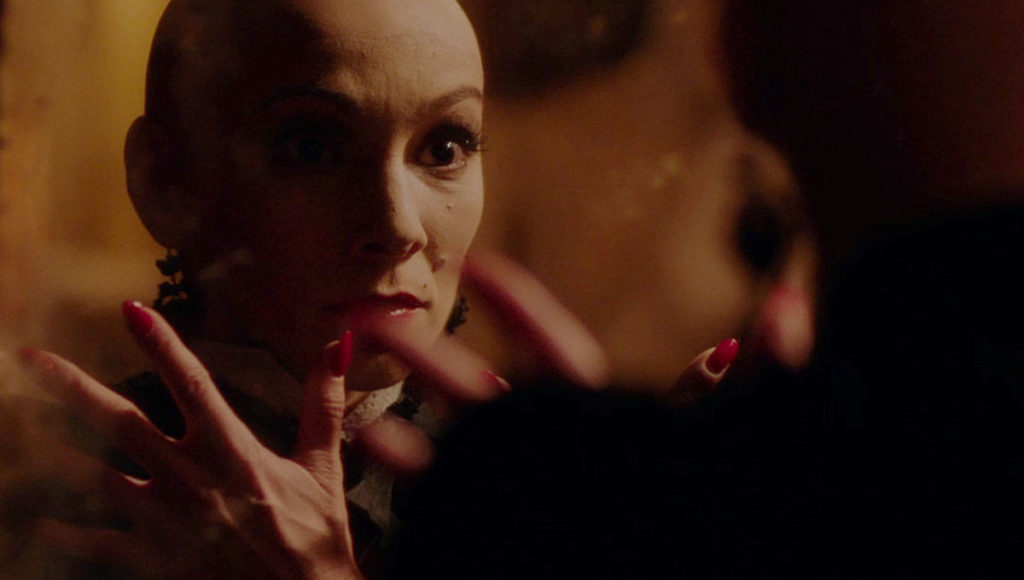 Played by Strickland regular Fatma Mohamed, Miss Luckmoore is the most entrancingly, unforgettably odd character I’ve seen on film since perhaps James Franco’s “Alien” from Spring Breakers. Dressed in a billowing, feathered black dress that gives her the appearance of an enormous vulture, Miss Luckmoore glides around the sales floor, grinning like something between a Stepford wife and Mephistopheles. She speaks like a self-help tape translated into a foreign language and back again, profoundly strange, yet so calmly and authoritatively delivered that your brain almost tricks you into accepting it as normal (sample dialogue: “Your dressing room is waiting for you and your dress to coalesce into a moment of pure wonder”). When her shift is over, she retreats to the back room, removes her towering wig to reveal a perfectly bald pate, crouches face-down in a tiny, casket-like dumbwaiter, and descends into the store’s depths. Occasionally, she and the other salesladies (who all have names like Miss Lullworth and Miss Brimblecombes) undress the mannequins, and… service them… while the store’s owner looks on in obscene pleasure. When the store opens each morning, Miss Luckmoore and her associates pose by the front door and perform a menacing yet serene dance as the customers froth and press themselves against the glass. Each of Miss Luckmoore’s scenes is so disconcertingly funny and indescribably disturbing that my cheeks hurt from grinning through them. If she doesn’t become an instant cult movie icon, I’ll eat my hat.

The most obvious contemporary point of reference for Strickland’s sensibility is probably the husband-and-wife team of Hélène Cattet and Bruno Forzani (Let the Corpses Tan, The Strange Colour of Your Body’s Tears). Like Strickland’s, Cattet and Forzani’s films pay homage to the eye-popping visuals and seamy sexuality of such Euro-schlock auteurs as Dario Argento and Mario Bava, but follow a dreamlike internal logic that defies rational plot mechanics. However, In Fabric reminded even more of another cultishly adored exploitation throwback: Anna Biller’s The Love Witch. Like The Love Witch, In Fabric’s production design is a quietly mammoth achievement, with seemingly each prop and costume handpicked to a very specific visual end. What’s more, both films share an inscrutably particular sense of humor, rooted in camp and odd, antiquated (if not outright invented) speech patterns. Both films feature a gorgeous color palette and a lush, vintage-styled score, and both more or less demand to be seen on the big screen.

Of course, like The Love Witch, you’re either on In Fabric’s wavelength or you’re not, and if its overlapping rhythms and cockeyed humor don’t appeal to you at the outset, you may be in for a long two hours. To be sure, its diptych structure can’t help but let a little air out of the tires around the halfway mark, and it could probably stand to lose twenty minutes or so. That being said, I was onboard from the very first frame, and I’m hard-pressed to think of a movie that so thoroughly surprised and delighted me. Walking out of the theater, my first thought was of seeing it again in its theatrical run, taking along friends and cackling in delight at their bafflement. Like Miss Luckmoore, In Fabric will seduce you into buying what it’s selling– even if I’m still not sure what the hell it is I just bought.