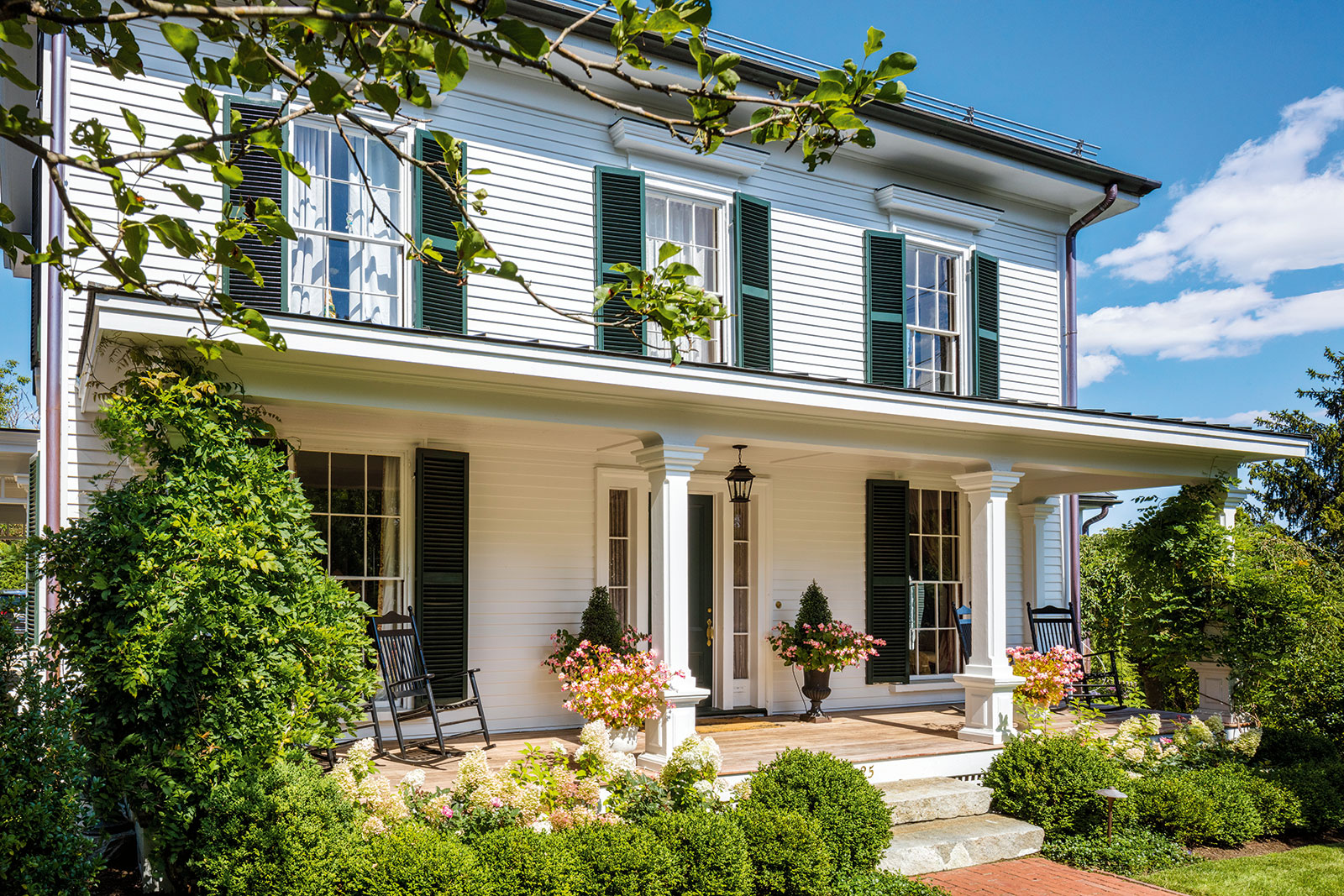 In order to write the next chapter for an Italianate farmhouse, with roots embedded generations deep in Belmont’s farming history, Patrick Ahearn Architect had to first work backwards. His firm, which is renowned for steeping new builds and restorations alike within a historic vernacular, had to deconstruct and remove some wayward, quick-sell renovations done in the 1990s before they could reinterpret “what might have been,” says principal Patrick Ahearn FAIA. “This was the second bite of the apple, if you will,” he explains. And it is sweet indeed. 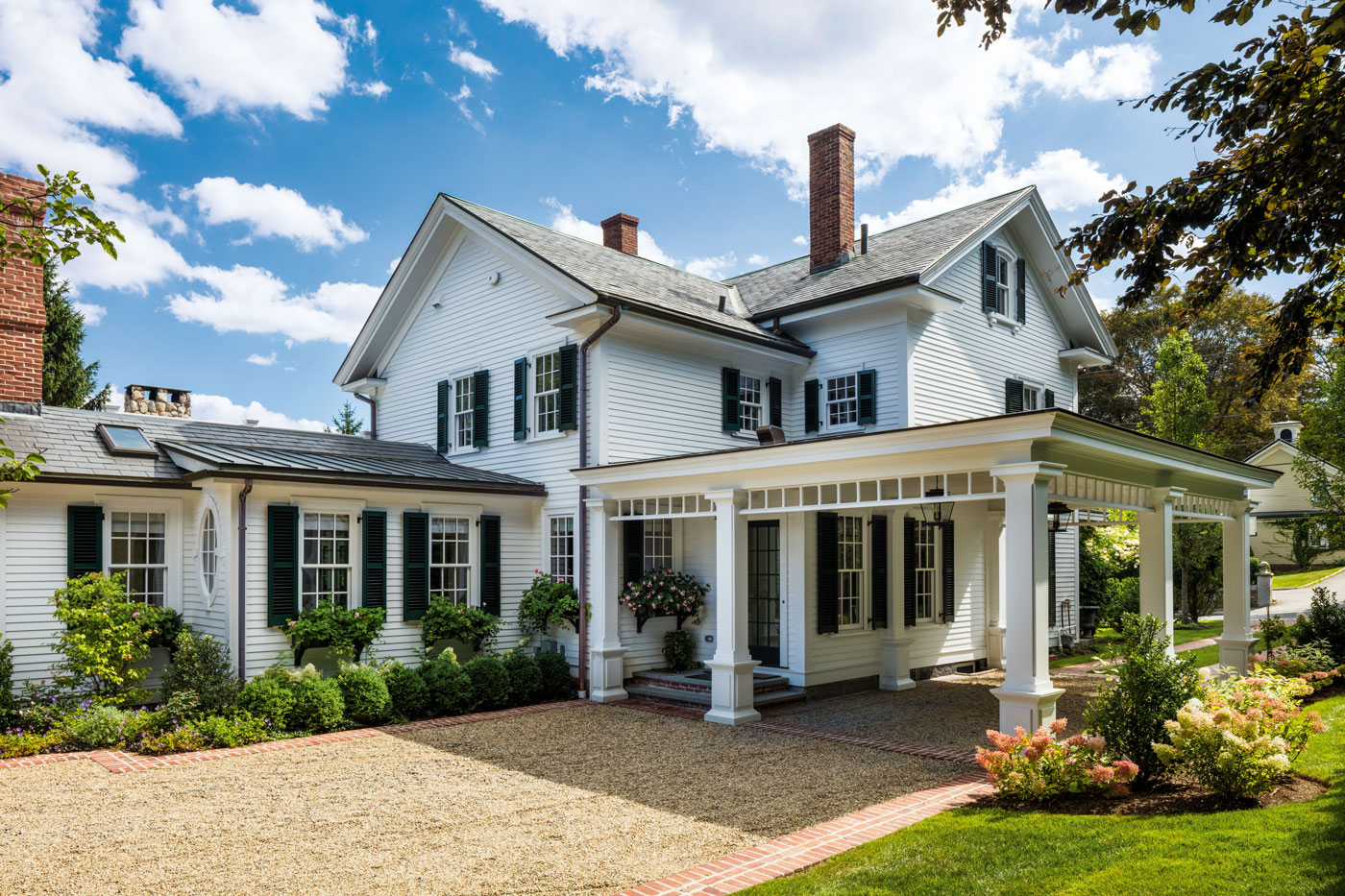 A pea stone gravel drive (like you “might see walking down the Champs-Elysees,” says Ahearn) banded with red brick replaced the former heavy-handed brick driveway. Transom windows, re-detailed columns and new light fixtures were added to the porte–cochère to better suit the Italianate architecture.

The goal was to recapture the essence of the home, which, “while fairly stylized for the period,” says Ahearn, blended Greek Revival and Italianate sensibilities with a dash of Colonial restraint and “reimagine it in a way that is more sympathetic to its rich history.” 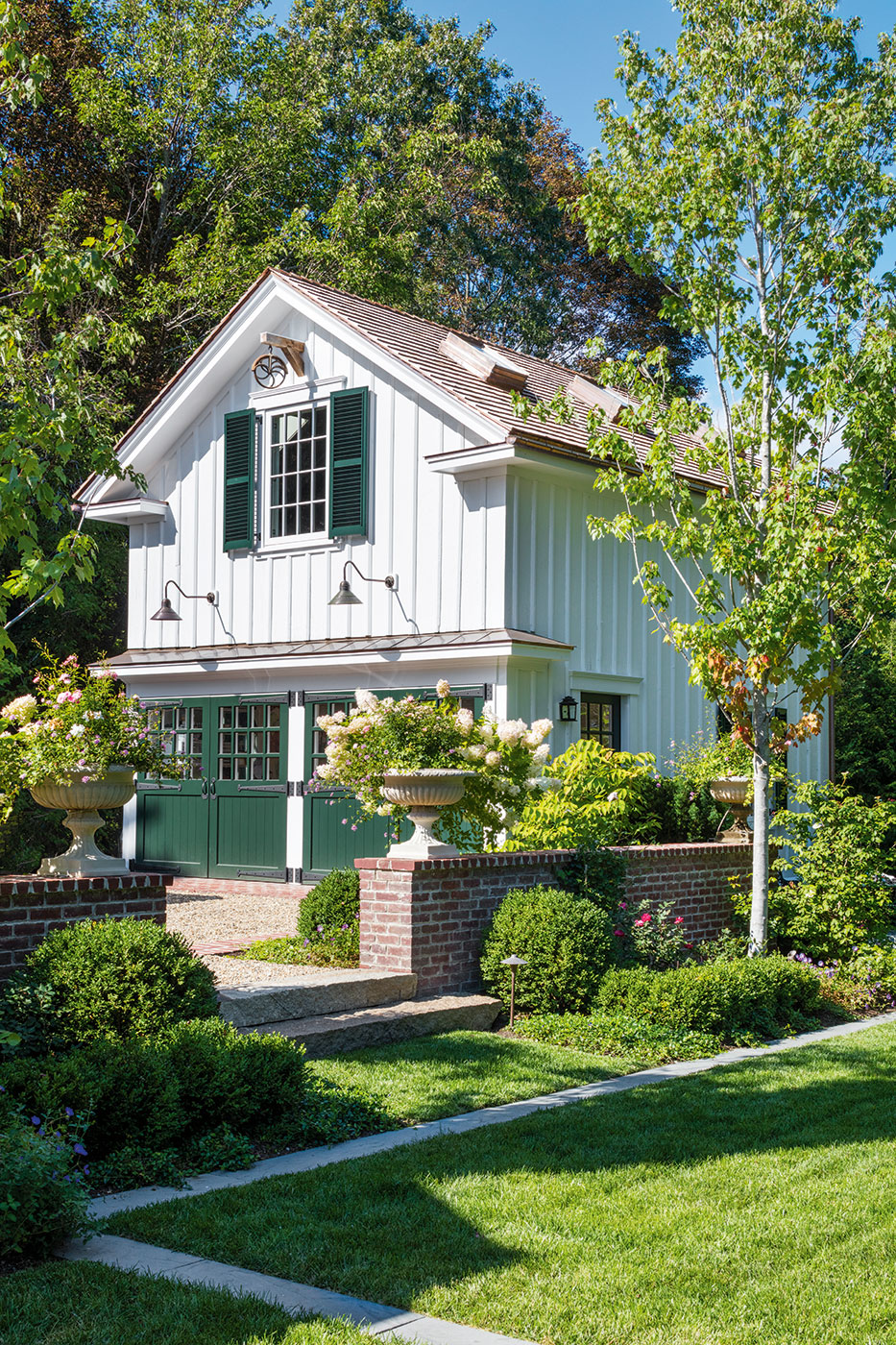 The other component was to immerse the home and carriage house in a lush, more formal, landscape, taking the setting from a bare lot to a series of heady, romantic outdoor rooms. The grounds also had to give the residents, one of whom is an artist from France, a taste of the Parisian countryside without losing sight of the home’s provenance or, what Ahearn terms, a “French country meets Italianate farmhouse” sensibility. 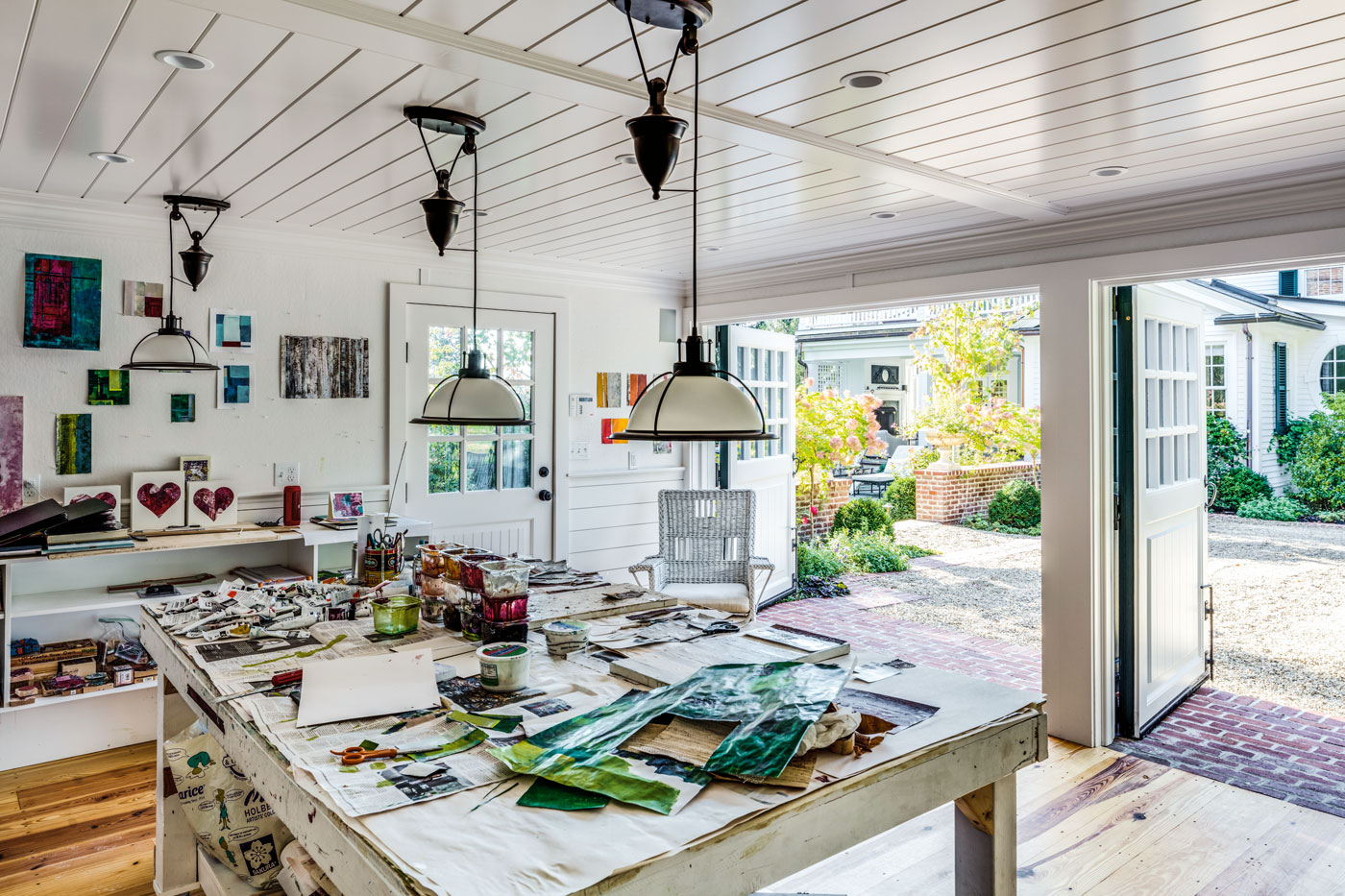 The home’s existing barn was renovated and repurposed to create a light-filled artist studio that opens up to the yard on the first level and a gym/“man cave” on the second floor.

To achieve this, landscape design and construction firm a Blade of Grass “maximized every inch of land,” says owner and lead designer Jim Douthit, leveling the backyard and bringing beautiful, bountiful plantings all the way up to the house. 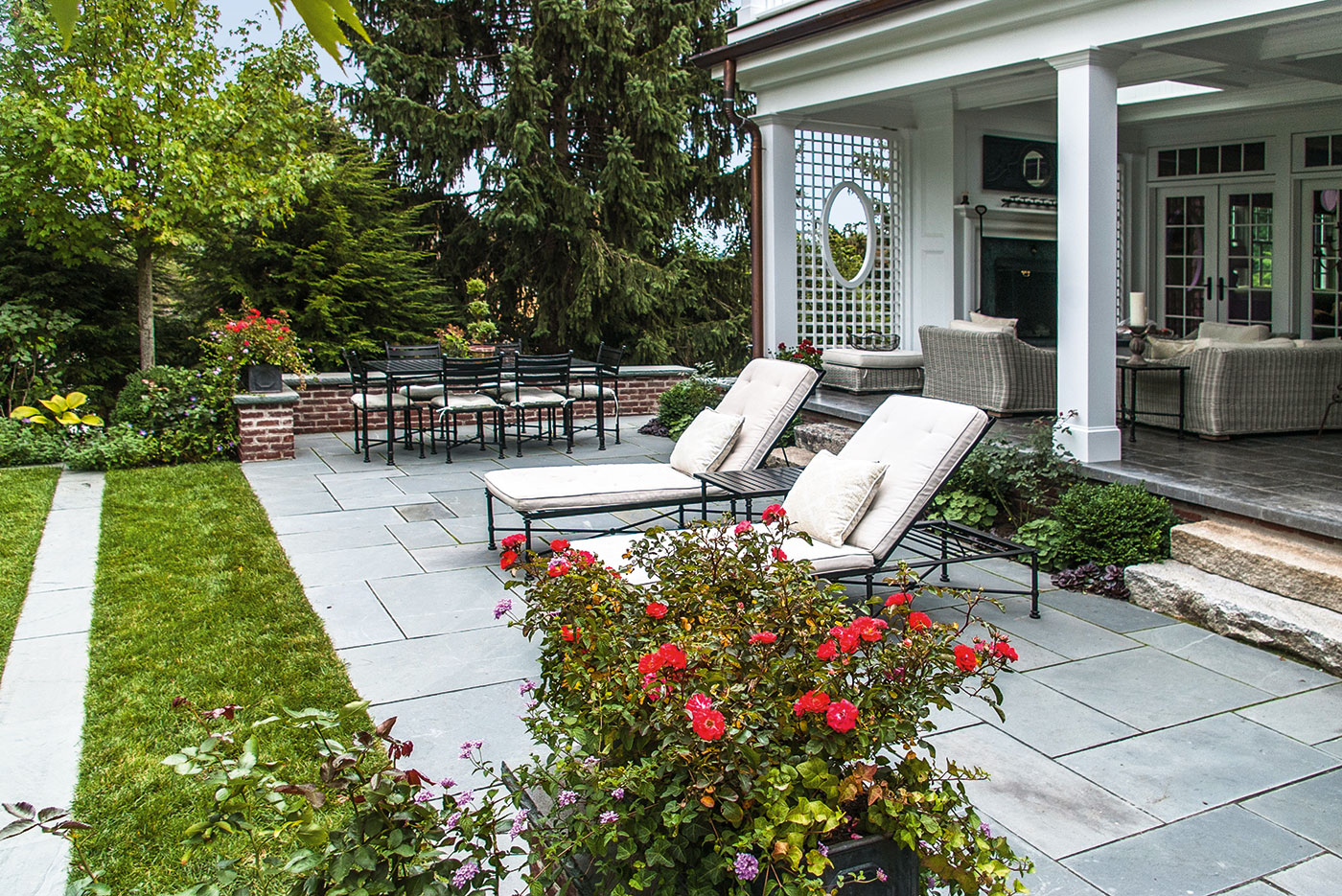 An outdoor living room with a fireplace spills out to a clean-lined bluestone terrace. Low brick walls and an elliptical window set in lattice add to the French country aspect of the space.

Douthit picked blooms like roses and hydrangea as well as antique elements that borrow from both the farmhouse and European idioms, and crafted a bluestone terrace off the outdoor living room and porch “that makes this incredible transition from the inside out,” he says. 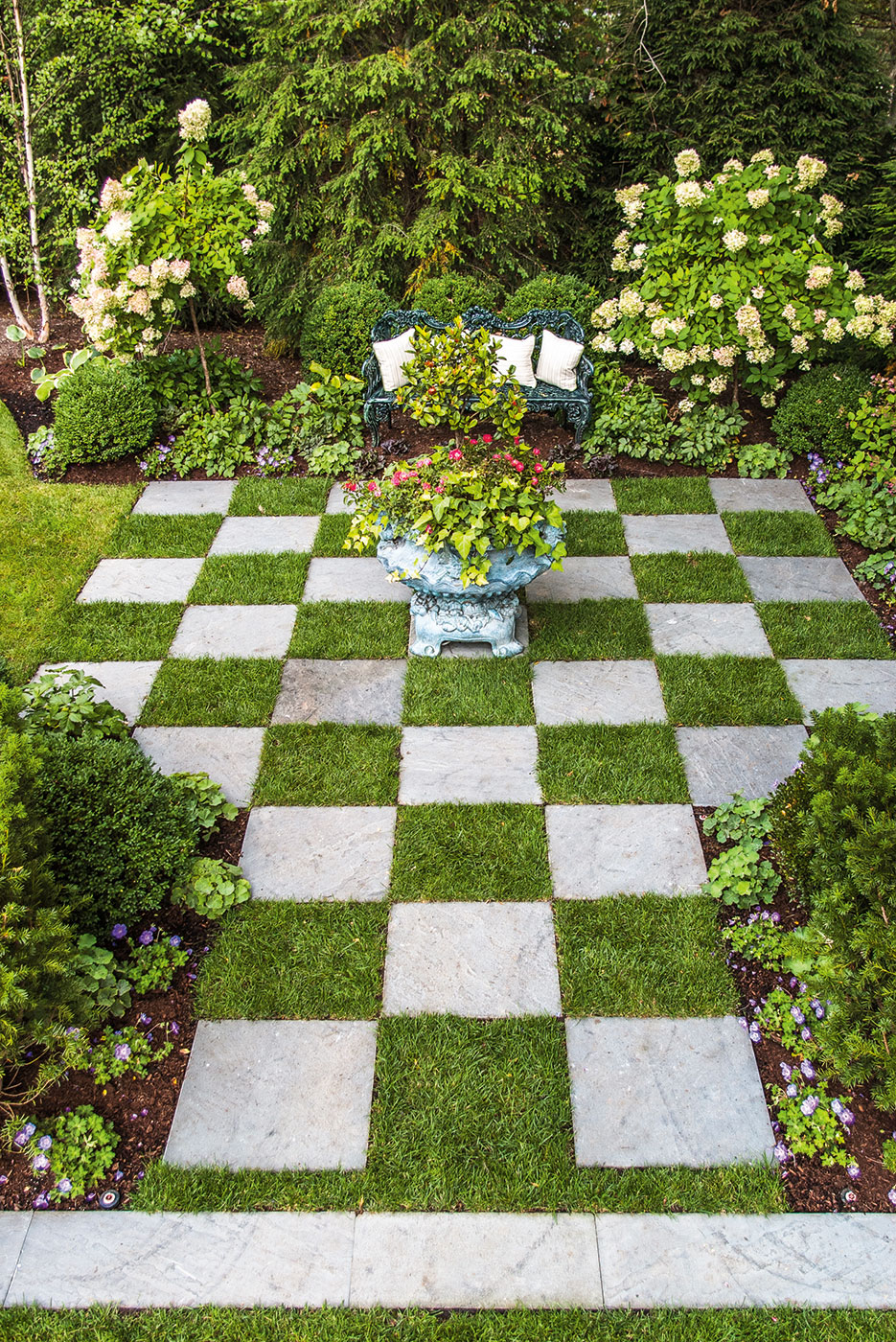 A converted antique fountain serves as a focal point for a checkerboard nook.

The result is a setting that reads as if it has developed over time and “recalls a more genteel way in which someone would have lived,” says Ahearn. The beauty of it is that what was scripted for the home and gardens is not just narrative, it’s prophecy. Says Douthit, “everything that was done outside has become part of the homeowners’ daily lives.”