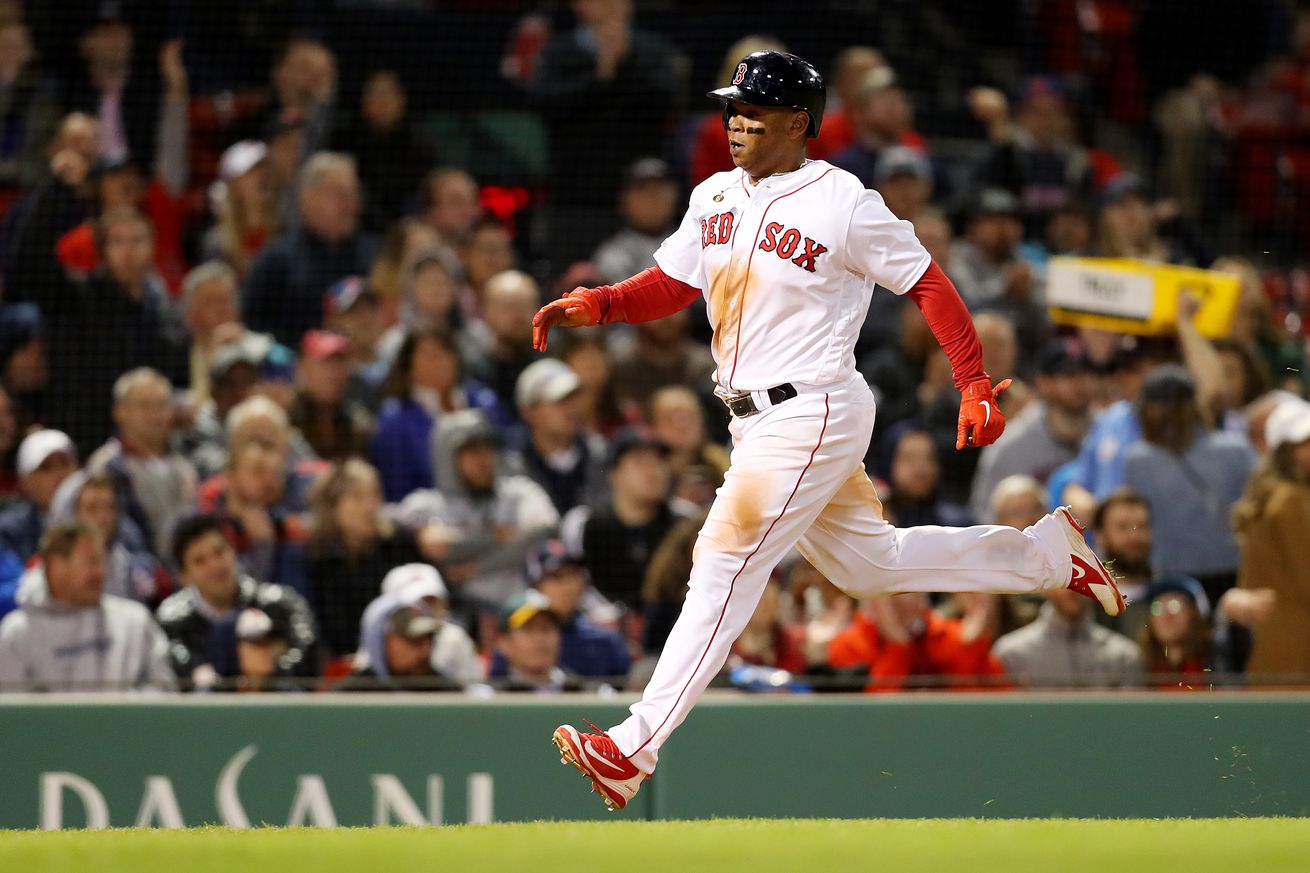 The Red Sox have been incredibly frustrating all year long for a variety of reasons. Some of those reasons showed up again on Monday, specifically with Eduardo Rodriguez and his tendency to nibble far out of the strike zone after getting ahead in a count. More frustrating of late, though, has been the offense being in a position to spark a rally but instead meekly ending the inning with one run at most. That’s not the offense we got used to all last year. In this game, the Athletics gifted the Red Sox a rally with a pair of errors in the third that loaded the bases with just one out. The 2019 thing to do would have been to score one on a sacrifice fly and do nothing else. Instead, they went with the 2018 strategy which was to drive in six runs and turn a 4-0 deficit into a 6-4 lead. They wouldn’t give it up from there and they started this Oakland series off on the right foot.

After how frustrating this weekend against the Rays was, the Red Sox were surely coming into Monday’s series opener against the Athletics looking for a quick start. It was easy to see an early hole turning into a disaster. Well, unfortunately for them that’s exactly what they got. Eduardo Rodriguez had looked quite good in his last few outings, but we found the southpaw reverting to old habits in this outing. He didn’t totally abandon any of his pitches, but Rodriguez did lean heavily on his fastball and only threw ten sliders on the day. More frustrating than the pitch usage, however, was his attack mentality. Or, more accurately, the lack thereof. As we’ve seen so often in his career, and as we saw so much early in the year, he was getting ahead in counts and then totally backing off just hoping for bad swings. We were reminded yet again that major-league hitters are too good for that approach.

Rodriguez was solid in the first inning, to be fair to him. He allowed just a single there and struck out two, but things would quickly take a turn for the worst. In the second inning, he started each of the first two batters he saw with 0-2 counts. That should mean good results are coming! Instead, he walked both batters. That’s Rodriguez at his worst in a nutshell. Those two walks were followed by a double play ball hit just slightly too weakly to turn two, and then a stolen base to put a pair in scoring position. From here, the floodgates opened. Jurickson Profar singles to plate two before moving to second and scoring on a Josh Phegley single. Matt Chapman then came through with a big double, and the A’s had knocked Rodriguez around for four runs. Given how the Red Sox offense had performed of late, a 4-0 hole in the second, with Rodriguez looking like he did, felt insurmountable.

Boston’s lineup wasn’t making anyone feel any better in the first couple innings, either, with both frames ending with a big double play. That sequence has become all too familiar for this team thus far. However, in the bottom of the third things took a turn for the better, thanks in large part to Oakland’s defense. Christian Vázquez started the inning with a walk, but it looked like Tzu-Wei Lin would quickly follow that with a double play. Instead, Profar botched the play, allowing both runners to remain on base thanks to the error.

If you’ll recall, when these two teams met out west at the start of the year Profar made an error on a double play ball that led to a Red Sox win. They would take advantage of this mistake as well. Andrew Benintendi loaded the bases on another misplay when Kendrys Morales took too long to make a play on a grounder that resulted in an error on Frankie Montas for….reasons (he missed the bag, but it still was a terrible play by Morales). From there, the Red Sox just moved the line along. Mookie Betts and J.D. Martinez both singled before Xander Bogaerts doubled out over Ramón Laureano’s head in center field. A couple batters later, Michael Chavis put a single through the middle and when the dust settled the Red Sox had six runs on the board. All six runs were unearned, for whatever it may be worth, but it was nice to see this team take advantage of mistakes. It’s been a rarity this season.

So, now it was on Rodriguez to maintain the lead and make sure that second inning was the only bad one of the evening. With a decent amount of pressure in that top of the fourth to come through with the mythical shutdown inning, Rodriguez did just that. He set the A’s down in order with a pair of strikeouts and a ground out. The fifth wouldn’t be as strong, though. The southpaw gave up a leadoff single, though that runner was caught stealing on a pick off play. Rodriguez gave up two more singles after that, however, and his day was over. Heath Hembree had to come in with two on in a two-run game, but he came through with the third out to escape the jam.

After the Red Sox added another tally to their lead thanks to a Rafael Devers double and bloop RBI single from Chavis, Colten Brewer tossed a scoreless sixth. The seventh belonged to Brandon Workman, who was not nearly as successful. The righty walked the first two batters he saw, and after getting a strikeout he allowed both runners to advance into scoring position on a wild pitch. He’d get one more strikeout before Brasier came on to face Khris Davis. The Red Sox won the battle with Brasier getting the K to end the inning and maintain the three-run lead.

Boston would add another to that lead on an RBI single from Jackie Bradley Jr., and Brasier came back out for the eighth. After adding yet another run in the eighth, Hector Velázquez — the presumed Wednesday starter — got the call for the ninth. Things did not go well for him, as he got a long fly out to start the inning before giving up a single and two walks to load the bases and end his night. Matt Barnes had to come on with a five-run lead. He got two quick outs and the game was over.

The Red Sox will look to clinch a series victory with a win on Tuesday night. They’ll be sending Rick Porcello to the mound for that game with Aaron Brooks going for the A’s. First pitch is scheduled for 7:10 PM ET.

Over The Monster https://www.overthemonster.com/2019/4/29/18523378/red-sox-athletics-michael-chavis-mookie-betts-rafael-devers-ryan-brasier
Categories: Sports