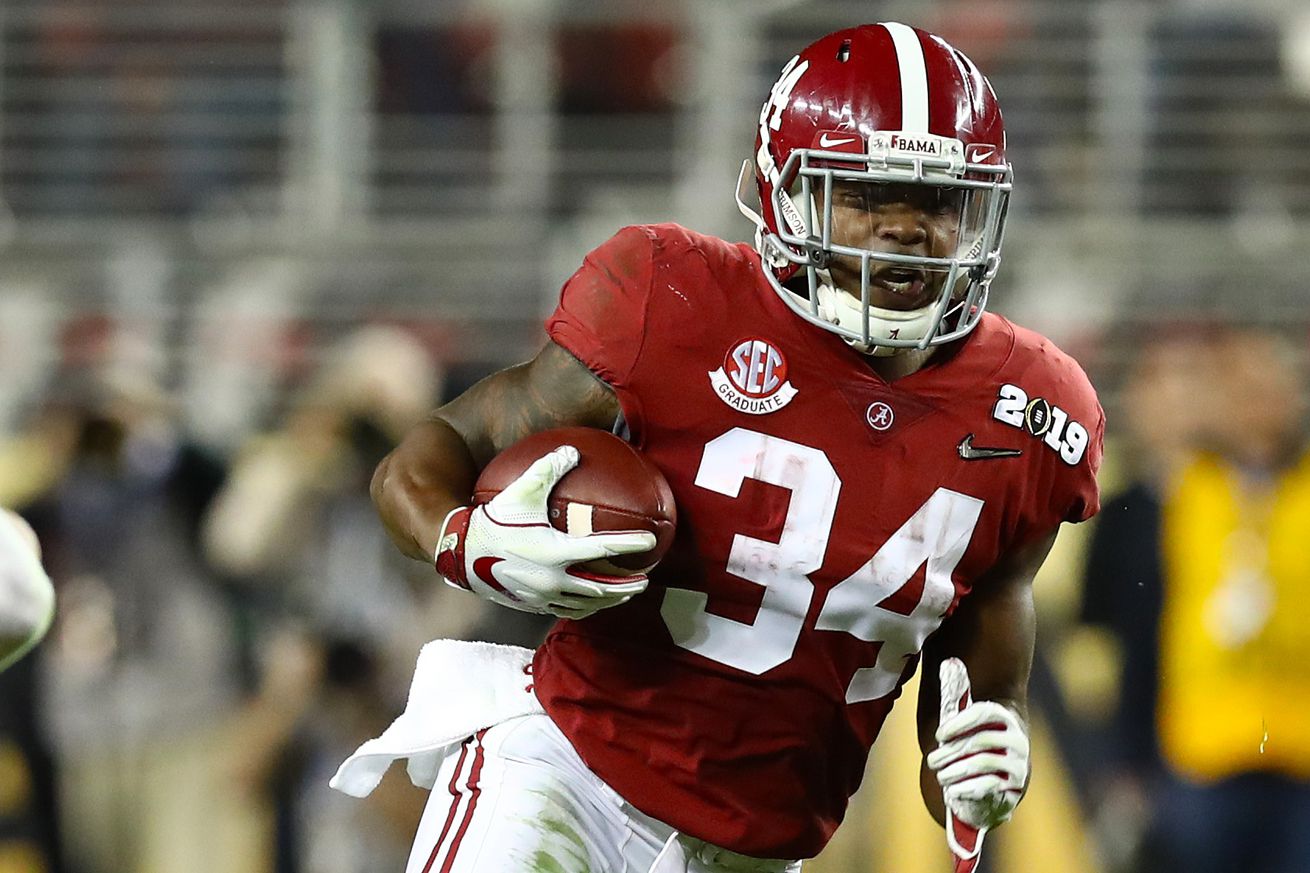 With the 87th overall selection in the draft, the New England Patriots made a rather surprising decision by addressing one of the deepest positions on the team: the Patriots drafted running back Damien Harris out of Alabama.

My first reaction to the news was not positive. I wouldn’t say I was apoplectic but I felt there were better options available. I think out of all the draft picks my opinion of this one has seen the most positive improvement from where I was when it was first picked.

I want to take you back to a press conference with Tom Brady where he specifically mentions the deep desire for the offense to have a short yardage back. At the time he was discussing the pick in the context of Sony Michel. It was an intriguing answer but it also left me a bit perplexed. Michel is not a short yardage specialist, so it did not appear like the need matched up with the talent. You know what player does match the short yardage specialist profile? Damien Harris.

Be warned future fantasy players, I see some nice Michel-dominated drives that end with Harris swooping in to take the touchdown. I think it is clear the Patriots have a specific role in mind for Harris and I think he has the capacity to fulfill that role admirably. Everything about him screams short yardage back. He has the build, the efficiency, the technique and the power. Michel and Harris are both two-down backs but their skills are not entirely duplicative.

I think it’s clear the Patriots have a specific role in mind for Harris and he has the capacity to fulfill it admirably.

Another thing to like about Harris is his pass protection. He displays well above-average skill in this arena which will make it very easy to put him on the field as a rookie. Another thing to like about Harris are his hands. He doesn’t have the speed or route running skills to be an adept pass catcher but his hands are quite natural meaning he at least gives you something in the passing game.

Another element to like about Harris is his leadership qualities. Like Sony Michel he was a two-time team captain who was given impressive marks for his character. Harris can also participate on special teams. I think the best case scenario for Harris fills an (apparently) critical role as a short yardage guru who pass protects well and offers a sprinkle of versatility through dump off passes and special teams.

To be perfectly honest I don’t have a lot of concerns with Harris. If the concerns with Chase Winovich and Joejuan Williams are that their major physical deficiencies limit their floor, the concern with Harris is that his physical deficiencies limit his ceiling. He is the classic high-floor, low-ceiling prospect in my eyes. People have compared him to Michel because he was productive out of a committee but make no mistake: the former first-rounder is a superior talent, which is reflected in where he was picked.

That leads us to the issue of value. On one hand, the Patriots have been had issues with running back both in 2015 and 2018. On the other hand, how much do you really want to value the fourth depth option of the least important position in football? The Patriots would be fine if Rex Burkhead, Sony Michel or James White missed a game. Would they be okay if Julian Edelman or N’Keal Harry did the same?

People bring up the injury concerns with Michel and Rex Burkhead, but I could levy the same concern at nearly every position. Not to mention you can grab solid running backs through free agency, through the last four rounds of the draft, or even through undrafted free agents. It’s much harder to do that with other positions. The potential cap gains are also limited.

Harris does not do what Burkhead or White do so I’m not convinced this lets us move past either. But even if he causes New England to move past Burkhead it only saves the team a few million in cap relative to another position that might save them significantly more. I think the realistic worst-case-scenario is that Harris offers minimal value for a third round pick, not necessarily him busting as a prospect.

Closing Thoughts on the Grade

As for Harris, the B is purely the result of his limited value. He’s a safe pick. I think he will fill a need the team desired to fill. I don’t see very much upside here. As long he fills his role at a high level I can be satisfied with taking him at the bottom of the third, hence a B grade.

Overall, I think the Patriots did well for themselves on day two. There is definitely some significant risk but there is also some legitimate upside. You are going to have to take risks when consistently picking at the bottom of the draft. In this case I think these risks are calculated ones, with better than even odds of paying off in big way.