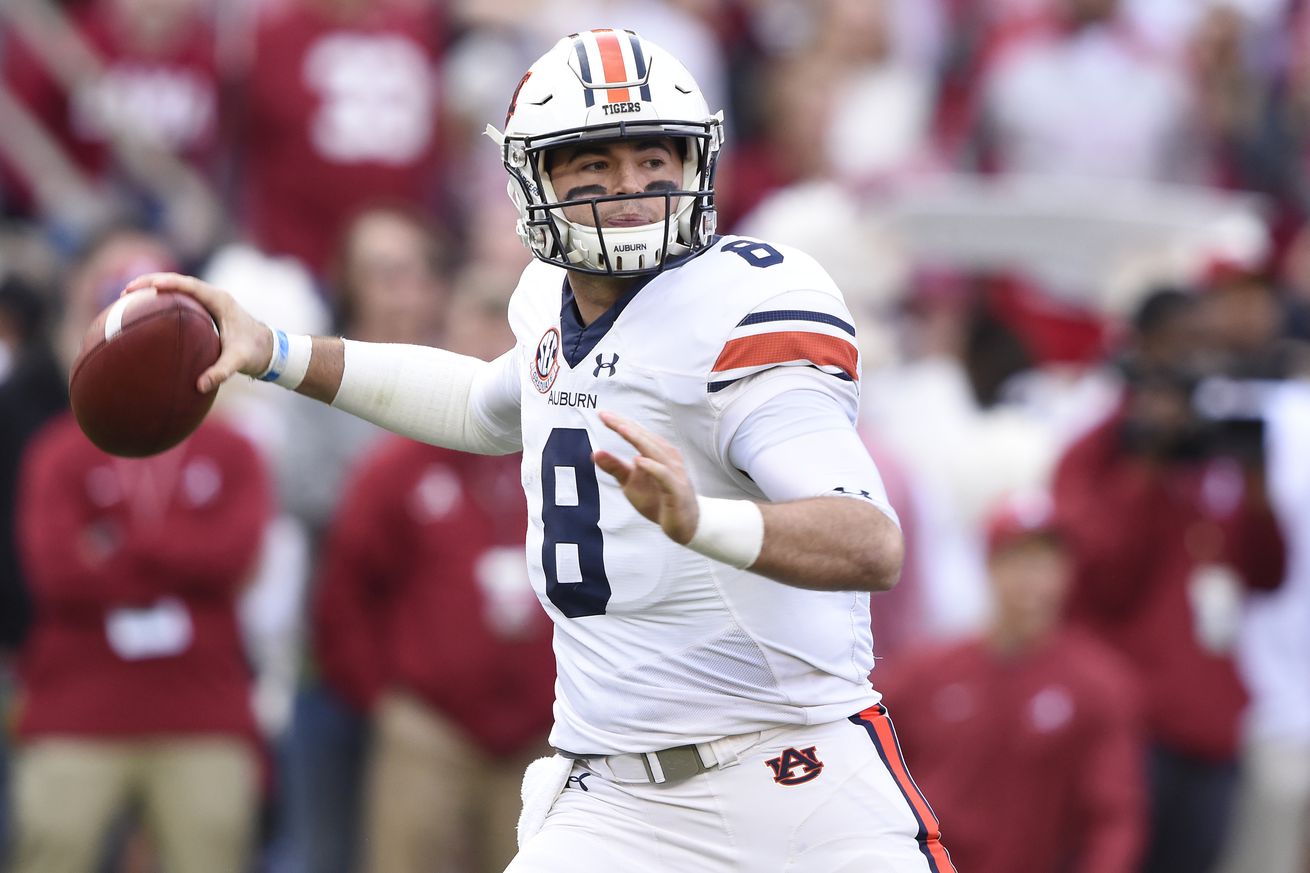 When the New England Patriots selected Auburn quarterback Jarrett Stidham in the fourth round of the 2019 draft, they drafted a player who was a bit of an evaluation enigma. Just what kind of quarterback prospect is Stidham? Is he the player that struggled at times on film, perhaps playing in offenses at Baylor and Auburn that were not tailored to his strengths? Or is he the passer we saw down in Mobile during the Senior Bowl, who seemed comfortable in Kyle Shanahan’s offense, albeit while spending most of the time in shorts and throwing against air in practice?

To get a deeper understanding of Stidham I returned to two of his games from last season: Outings against Alabama and Georgia. Between the talent on the other side of the ball (both teams had defensive players drafted in the first round of this draft) and the schemes employed by Nick Saban and Kirby Smart, these contests are as close as a college quarterback can get to playing on an NFL Sunday. What can we learn about how Stidham fared against those two schools last season?

At the outset, his numbers were pedestrian at best. He completed 24 of 36 passes for 163 yards against Georgia, without a touchdown or interception. In the Iron Bowl, Stidham completed just 13 of 30 for 127 yards and a touchdown, and an interception. Auburn lost both games. So, there’s that.

But does the film add any notable context? As is usually the case, it does.

One of the first things that you see in both games is that Stidham (#8) handled blitz packages pretty well. Numbers demonstrate some of this from his game as a whole, as Stidham rated ninth last year in college football according to Pro Football Focus’s adjusted completion percentage against pressure. He was 19th in PFF’s adjusted completion percent against the blitz metric. But you can see this on film against elite competition in these two games.

On this play against Alabama, Stidham aligns in the pocket and the Tigers use a 2×2 formation, with a slot alignment to both sides of the field. Alabama has a sub package in the game, and they show a two-high safety look before the snap. However, the Crimson Tide rotate their defense as the play begins, blitzing a linebacker and sliding into a single-high, Cover 1 coverage:

Auburn runs a mesh concept, crossing the slot receivers underneath. Stidham remains calm in the face of this blitz, and replaces the blitzing second level defender with the ball on the crossing route working right to left:

Only a great recovery by the trailing cornerback prevents this from turning into a first down.

A very tough aspect to playing quarterback for younger passers is identifying and attacking a boundary blitz. During his final college season, Deshaun Watson struggled at times against cornerback blitz looks, and his game against Florida State saw him get fooled by these designs a few times. That is why Stidham’s execution on this cornerback blitz against Alabama is impressive:

Stidham spots this blitz from the boundary and immediately comes to it, putting the ball on his receiver for an easy first down conversion. Yes, the throw was a bit low and the play was blown dead as the WR went to his knees to make the catch, but in the NFL he’s still running. The main point is the process Stidham shows on this play. He spots the blitz, hangs in the pocket (even taking a shot from the blitzer coming from the other side of the formation) and delivers to move the chains.

The ability to replace the blitz with the football was something Stidham had displayed weeks prior in Auburn’s loss to Georgia. While his numbers were again pretty pedestrian in that contest, Stidham showed some of the traits that made NFL scouts believe in him, including the Patriots. On this first example from the Georgia contest, Stidham again identifies the pressure and attacks the vacated spot:

This time the defense brings a linebacker blitz, and Stidham immediately comes to the slant route that slides into that open space. Stidham does not panic in the face of this pressure, and delivers a strike that moves the chains.

On this play from later in the contest, we can see Stidham first active in the presnap phase of the play, adjusting the protection and checking with his running back to make sure that he is on the same page. Then, the Bulldogs bring late pressure, sending both the slot cornerback and a safety off the right side of the offensive line. (It is hard to tell if this is a mistake or if both defenders are tasked with blitzing on this play). Regardless, Stidham spots this and immediately throws to that area of the field:

Perhaps more impressive than the recognition here is the placement. Stidham knows that the underneath linebacker is lurking, so he puts this throw on the back shoulder of his target, to get him to throttle down and protect him from that defender. A very good play all around from the quarterback.

Look closely enough with many college quarterbacks and you can see them running plays right out of New England’s playbook. This uncovers a dark little secret about offenses in the game today: There is a lot more overlap among systems than one might believe. Every team has a mesh concept in the playbook, every team has a three level stretch, every team has four verticals.

Auburn, it seems, has some multiple slant concepts that the Patriots run with TB12 himself.

Tosser is one of the route designs that is synonymous with the Patriots offense, perhaps dating back to Chris Brown’s great piece from years ago breaking down New England’s Erhardt-Perkins system. This is a two receiver route concept that pairs one slant route with another slant route. These days you cannot turn on a college football game without seeing one or both teams running this design.

This is the first play of the game, and Stidham makes the right read and puts this throw in the correct spot, only to see it dropped. Quarterbacks read this inside-out, checking the inside slant route (and the corresponding defender) first before working outside. Stidham sees off coverage over his first option, so he pulls the trigger on the inside route. As for the placement, when throwing the slant route quarterback are taught to put it on the receiver, and not to lead them too far. The goal is to make the catch easy and force the defender to drive through the body to the football. Stidham’s placement is in a good spot, but the receiver cannot make the catch.

A few plays later you see Stidham running another concept from New England’s playbook: All-Slant. As you might expect, this is now a three receiver combination, with each running a slant route. Stidham again makes the right read, working all the way to the outside receiver, but is again let down by a drop:

This is the right read because the defenders over the two inside routes have inside leverage, taking those away right after the snap. The defender along the outside is playing off coverage, giving the running back an easy release and open space. Stidham spots the slot corner rotating over at the last moment, so he puts this throw again in a spot to protect his receiver, only the RB fails to make the catch.

Before wrapping I wanted to highlight two more plays from Stidham’s outing against Georgia that illustrate just briefly what he could be in the NFL. Pocket mobility and execution in the scramble drill are aspects to playing the quarterback position where Tom Brady probably does not get the credit that he should. While no one would confuse Brady with some of the game’s more mobile and agile passers, the veteran QB does a great job at feeling pressure and using his feet to extend plays, buying time when necessary to find targets downfield.

While Stidham might be more athletic than Brady, pocket footwork and keeping your eyes downfield are a big component of mobility at the quarterback position. On this third and long against Georgia, Stidham faces a linebacker twist inside, but uses his feet to slide to his right and buy time. As he does this, he keeps his eyes trained downfield, and makes a throw on the corner route to move the sticks:

This is a very good example of a quarterback not dropping his eyes in the face of pressure, but keeping them downfield to look for an option as the pocket collapses around him.

A few weeks ago I posited that Nick Mullens, the backup quarterback for the San Francisco 49ers, might be an option for the Patriots given some of the traits he displays at the QB spot. One of them is manipulation. Longtime New England fans have seen Brady over the years move defenders with his eyes. This is something that Stidham also brings to the table as a prospect:

Before throwing this slant route, Stidham freezes the play-side linebacker by opening his eyes to the middle of the field. That quick glance is enough to freeze that defender (#32), which creates space for the slant route working to the inside. Looking at this play from the end zone camera illustrates this further:

Bear in mind that Stidham does this (and delivers an absolutely perfect throw) backed up in his own end, on the road, while trailing in the second half. This…is an impressive throw.

When studying prospects you want to evaluate them against top competition. Alabama and Georgia are two of the best programs that college football has to offer, and perhaps the best simulation for life in the NFL a college quarterback can face. While Stidham’s numbers in those two games last year might have been underwhelming, he still showed some flashes of what he can become as a quarterback against this stiff competition. Perhaps those flashes are what the Patriots and their scouts saw as well.