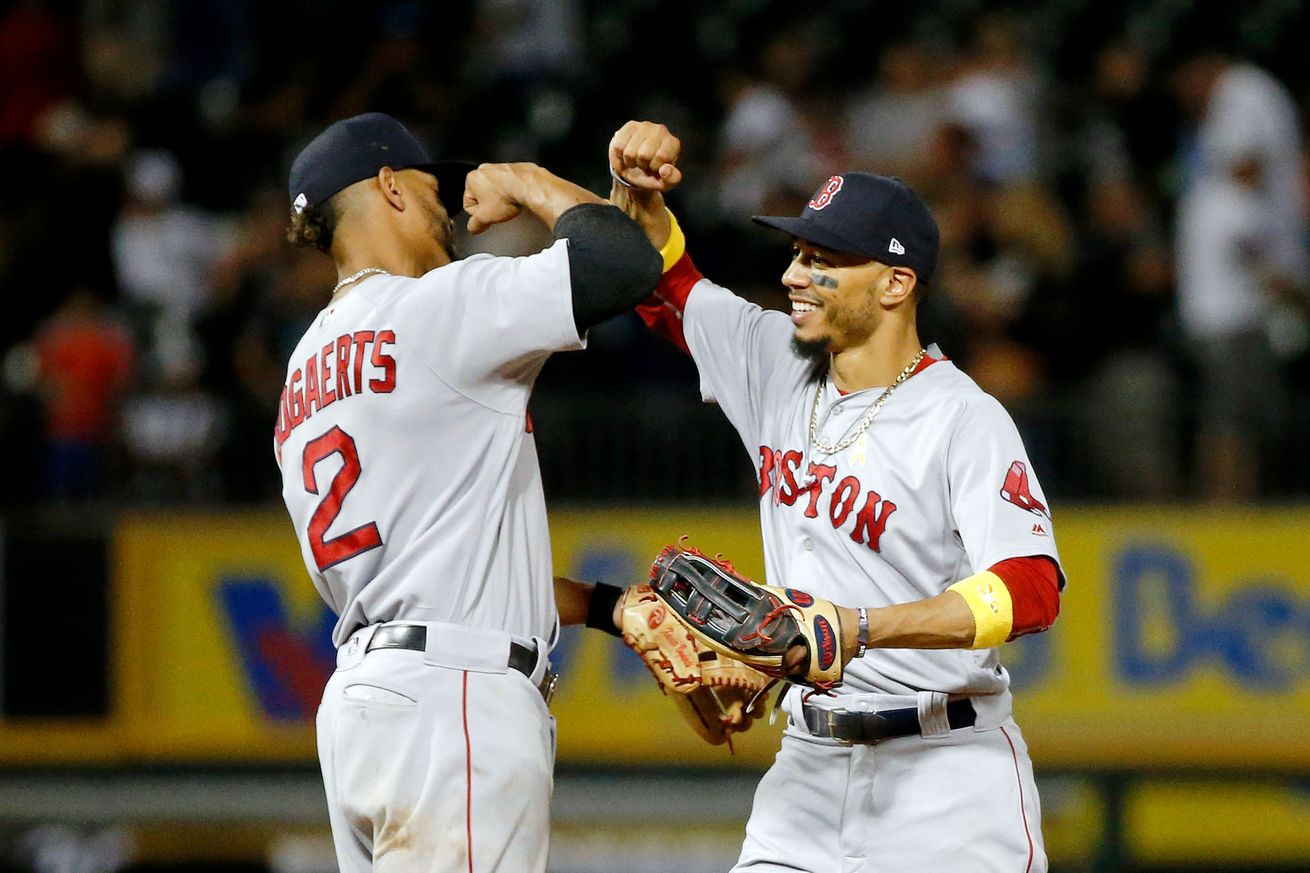 A battle of the Soxes

As the White Sox are trying to emerge to the other side of their rebuild they are currently hovering around .500 with a good offense but pitching that has not caught up.

Up. The White Sox have only played the Tigers and Orioles since April 17, and they haven’t played a winning team since beating the Yankees on April 14. Of course, the Red Sox aren’t a winning team right now so the streak will continue! Anyway, Chicago has taken care of business against Detroit and Baltimore, winning four of their last five and five of their last eight.

Amid all of the disappointment around the Red Sox rotation this year, Price has been chugging along as the lynchpin in this group and easily the best and most consistent starting pitcher. The southpaw wasn’t great in his last outing, but he still tossed a quality start with three runs allowed over six innings with seven strikeouts. He also has yet to allow more than four runs in a start this year. He’s racking up strikeouts like we’ve never seen before, too, setting down just under 32 percent of the batters he’s faced. As long as he’s keeping the ball in the park, Price has been great and there’s little reason to expect that to change at this point. He faced the White Sox once last year, allowing two runs over six innings with six strikeouts and three walks.

Giolito was once the top pitching prospect in all of baseball and was one of the key pieces that came to Chicago in the trade that sent Adam Eaton to Washington. The righty has yet to pan out in the majors, though he’s still only 24 years old. He’s shown some flashes this year, and his last outing was as good as he looked all year. However, that outing was back on April 17 and he had to leave in the third inning due to a hamstring tweak. He’s striking out more batters than ever, but ultimately he’s still being hampered by poor control as he’s walking over 12 percent of his opponents this year. Over his four starts and 18 2⁄3 innings overall, Giolito has pitched to a 5.30 ERA but also has a 3.84 FIP and a 4.23 DRA. The Red Sox were shut down by Giolito last year, scoring just one run over 6 1⁄3 innings in their only meeting. So far this year he’s featured a low-to-mid-90s fastball along with a changeup, a slider and a curveball.

On Friday, Sale will try to put his April in the past and start a surge in May, starting that quest against his old team. Sale obviously spent a long time in Chicago, where he developed into one of the best pitchers in all of baseball. He’s now in Boston and in the midst of his worst stretch of baseball since, well, before anyone started watching him every time out. His stuff and fastball velocity have been getting the headlines, and for good reason, but more than that I’ll be watching for the sharpness of his slider as well as his command in general. Watch the catcher’s glove here and just hope it’s not moving very much. Sale dominated his old team in his lone matchup with them in 2018, allowing just one run over eight innings with ten strikeouts and one walk.

López is another former prospect who came over from Washington in the Eaton trade, and while many had him pegged for a bullpen role in the future the righty has stayed in the rotation to this point. Currently in his age-25 season, López has struggled to start the year with a 6.03 ERA over six starts and 31 1⁄3 innings with a 5.28 FIP and 7.33 DRA. the issue here is command, as López has a tendency to lose control for long stretches and also has the unfortunate combination of high flyball tendencies and poor command. If he’s hitting his spots his stuff is good enough to put together a good start, but the Red Sox have to be searching for mistakes and punishing him for them. Whether that means attacking pitches over the plate or racking up a bunch of early walks remains to be seen. This year López is featuring a mid-90s fastball as well as a slider and a changeup.

Rodriguez took a big step back in his last outing and really he ended up doing better than he should have in that game. He settled in as the game went on, but early in the outing we saw the same frustrating features he appeared to have gotten away from in his previous couple starts. Rodriguez was falling in love with his fastball, struggling with control and failing to attack hitters with secondaries after getting ahead in the count. His four-run inning was started with a pair of walks that started as 0-2 counts, which is about as infuriating as it gets. We know the story by now. If Rodriguez is throwing everyone and staying in the zone after getting ahead in counts, it will be a good night. If not, well, I may be muttering bad words under my breath. The lefty faced Chicago once last year, allowing one run over 5 2⁄3 innings with 12 strikeouts and one walk.

Bañuelos may be a familiar name to some people here, as early in this decade he was one of the top prospects in baseball as a member of the Yankees organization. Unanimously ranked in the top 50 and by some in the top 25 in the game, his career hasn’t exactly gone according to plan. New York traded him back in 2015 and he’s since played for the Braves and Dodgers before getting to Chicago. He’s pitching in the majors for the first time since 2015 and he’s pitched to a 2.70 ERA over 20 innings. It’s worth noting he just recently shifted to the rotation, as he pitched out of the bullpen for his first four appearances before making two starts. That ERA looks good, but it’s come despite walking 12 percent of the batters he’s seen with a strikeout rate of 23 percent. The strikeout rate is fine and he keeps the ball in the yard enough for solid peripherals with a 4.20 FIP and a 4.35 DRA, but there’s likely some regression coming in that sub-3.00 ERA. The Red Sox have never seen Bañuelos and the righty will feature a pair of low-90s fastballs along with a slider, which is his most-utilized pitch, and a curveball.

Porcello was incredible in his last outing, tossing eight dominant innings against the Athletics and giving the bullpen a much-needed (mostly) night off. Obviously we can’t expect that kind of performance every time out, but it was refreshing to see after so much of this season had been a slog for the 2016 Cy Young winner heading into that start. The command was the big issue for the righty early in the year, so just hope he is hitting spots in this start. If he is, he should at least five the Red Sox a chance to win.

The White Sox played a doubleheader on Wednesday which messed with their rotation plans. They’re looking at a spot start or a bullpen game there. My best guess is that Carson Fulmer will get the start, but I won’t pretend to have a ton of confidence in that prediction.

Yoán Moncada was, of course, the headliner to go to Chicago in the trade that brought Sale to Boston, and he’s spent the last couple years as an everyday player with the White Sox. He’s playing really well to start this season, showing a much more aggressive approach at the plate that has helped his power numbers spike in a big way.

Michael Kopech was the other headliner in that trade, but things aren’t going as well for him. The big righty had to undergo Tommy John surgery last year and likely won’t get back on the mound until 2020.

Tim Anderson has been one of the biggest names in baseball this year, starting conversations about race in this league as well as celebrating home runs. In between all of this, he’s also been fantastic at baseball. The shortstop is not going to take many walks at all, but he’s putting the ball in play a ton this year and doing it with power we’ve never seen from him.

José Abreu is just out here doing his normal José Abreu stuff in 2019, hitting for power, drawing some walks, striking out some but not so far above league average and getting hits. He’s really good at this hitting thing.

Leury García is sort of an old-school player at the top of Chicago’s lineup. He won’t hit for power, he’s going to strike out some and he’s not going to draw many walks, but he’s going to try and put the ball in play and he gets a whole lot of singles when he does.

Yonder Alonso has had a rough year so far this year, but it doesn’t seem like it’s sustainably bad. He’s walking a ton, striking out at a lower rate than league-average and hitting for solid, if not great, power. Unfortunately for him, he’s been killed by a .174 batting average on balls in play.

Wellington Castillo is a solid hitter for a catcher, which is obviously not a high bar. This year, he’s not hitting for the power he has in the past but he’s drawing walks to help keep his batting line up.

Yolmer Sánchez fits the profile that a lot of other hitters here do as a guy who will strike out and not hit for power but does convert a lot of balls in play to singles.

Adam Engel is likely going to play a bunch here with the Red Sox starting three southpaws, and while he’s not much of a hitter he’s one of the better defensive outfielders in the game.

Álex Colomé, of course, spent a long time with the Rays before going to Seattle in a midseason trade last year. Now he’s in Chicago after another trade this past winter, and he’s about the same guy as always. He doesn’t get a ton of strikeouts relative to other closers in the league, but he gets weak contact and generally does a solid job that can go unnoticed.

Kelvin Herrera was a potential Red Sox target this past winter and he’s off to a solid start in Chicago thanks to solid strikeout numbers and his usual great control.

Jace Fry is the top lefty in Chicago and he can be very good but too often loses control of the strike zone.

Kopech, as mentioned above, is rehabbing after Tommy John surgery and is going to miss the entire season.

Eloy Jiménez would be the Rookie of the Year favorite in a world without Vladito but is currently on the shelf with an ankle injury that will have him out for at least a couple more weeks.

Nate Jones has seen his last few years in the league totally marred by injury, and he just recently hit the shelf again with another issue with his arm. There’s no word on severity as of now.

Ryan Burr hit the IL around the same time as Jones with inflammation in his shoulder. As with Jones, his timetable is unclear.

Jon Jay hurt his hip towards the end of spring training and has yet to play this season. Again, there is no timetable on his return.

The only game that could potentially be in danger for this series would be the opener on Thursday, as there’s rain in the forecast most of the day in Chicago. However, it seems like it should clear up by the time this game starts, with maybe some potential for a short delay at the start. Other than that, it won’t be particularly warm but it should be clear for the weekend.

Over The Monster https://www.overthemonster.com/2019/5/2/18526694/red-sox-white-sox-series-preview
Categories: Sports