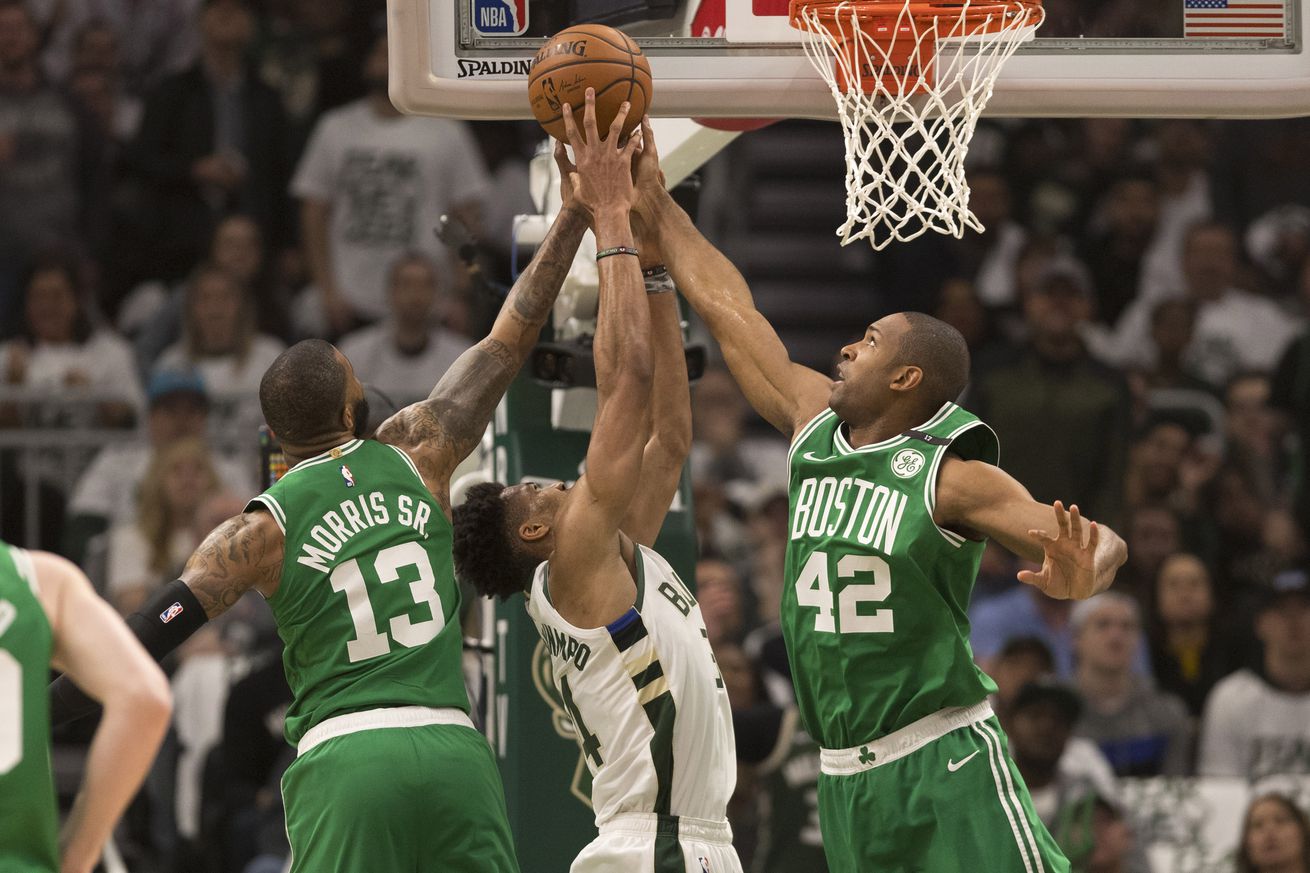 The MVP candidate presents a unique threat to the Celtics, but one, for the most, they’ve solved through two games.

Before Giannis Antetokounmpo was an MVP favorite and a superstar on a sixty-win team, he was a relative unknown as the 15th pick in the 2013 NBA Draft. He was Greek, not nobody knew he was an athletic freak yet. Most of his class couldn’t even pronounce his name let alone spell it:

Now, Giannis is a household name, the mononymous superstar of the Milwaukee Bucks who is the heir apparent to LeBron’s Eastern Conference throne. It’s a title well deserved. Antetokounmpo is a match up nightmare, the type of player that you have to dedicate a good part of your game plan for.

To their credit, over the first two games of their rematch, the Celtics have handled Antetokounmpo. Even in what many considered a break out game after his Game 1 disaster, Boston still held Giannis in check. In Game 2, he benefited from a home whistle that sent him to the line eighteen times (he averaged half that in the regular season) and only three of his seven made shots weren’t putbacks or pull up threes in the half court. For the most part, he’s been handled by Al Horford and the rest of the team’s concerted effort to keep him walled off from the paint.

As difficult as it might be to spell or pronounce his name, the problem of stopping Antetokounmpo presents itself as more of an advanced calculus. All players have tendencies and Giannis is no different. Here are his play types from the regular season:

The Bucks boasted the best defense in the NBA with a 104.9 defensive rating. With their size, they packed the paint in and allowed the fewest field goal attempts in the restricted area and the most from behind the arc. While they gave up a ton of threes, the misses turned into long rebounds and transition buckets. They were 6th in the league in fast break points (17.7 per game), but for what it’s worth, Boston was 7th at 16.2 transition points per game.

This is where Giannis eats. When 17,000-plus fans are cheering “Fear the Deer” in Fiserv Forum, they’re encouraging the Bucks to get out there and run like, well, deer. As noted above, over a quarter of Antetokounmpo’s attempts come in transition. He’s shown that he can go baseline to baseline in just a handful of dribbles and long steps and in the paint, he becomes a whirling dervish of Euro steps and elbows until he’s at the rim with a finger roll or a vicious dunk. The Bucks have scored 23 and 25 points in transition in Games 1 and 2 respectively–Giannis alone is responsible for 23 of those 48 points–and that’s an area they’ll want to clean up if they want to take advantage of home court and win the series.

Where Boston has seemed to clamp down on Giannis is in the half court. In two games, he’s hit just 7-of-21 inside of ten feet with eighteen seconds left on the shot clock. He’s also only recorded six assists (two to Khris Middleton and Brook Lopez and another to Pat Connaughton and Ersan Ilyasova). Those are results that the Celtics will live with, because in the bigger sample size of the regular season, the shooters that surround Giannis on the perimeter were the multipliers. Just like they did in Game 2, a barrage of threes would bury opposing teams.

During the regular season, Antetokounmpo’s favorite targets behind the arc were Middleton, Malcolm Brogdon, and Brook Lopez. Combined, that trio of starters made 130 out of 347 three pointers (37.5%); so far in this series, they’re 3-for-10 with Brogdon possibly returning from injury in Game 3.

To some extent, it’s more effective to entice Giannis to shoot rather than make the kick out pass. As the numbers show, he’s average in isolation or in the post. In ninety-five possessions when he’s been covered by primary defenders Al Horford and Aron Baynes, he’s made just 10-of-29 shots which includes an uncharacteristic 5-of-9 from behind the arc. He shot 25.6% in the regular season.

The numbers don’t lie. The blow out win on Sunday afternoon may have seemed like a revelation for Antetokounmpo after such a disappointing Game 1, but if you take a step back and consider how much the Celtics have hamstrung him in large parts of the games, the truth is they’ve so far been consistent with their game plan and made the math work out for them.