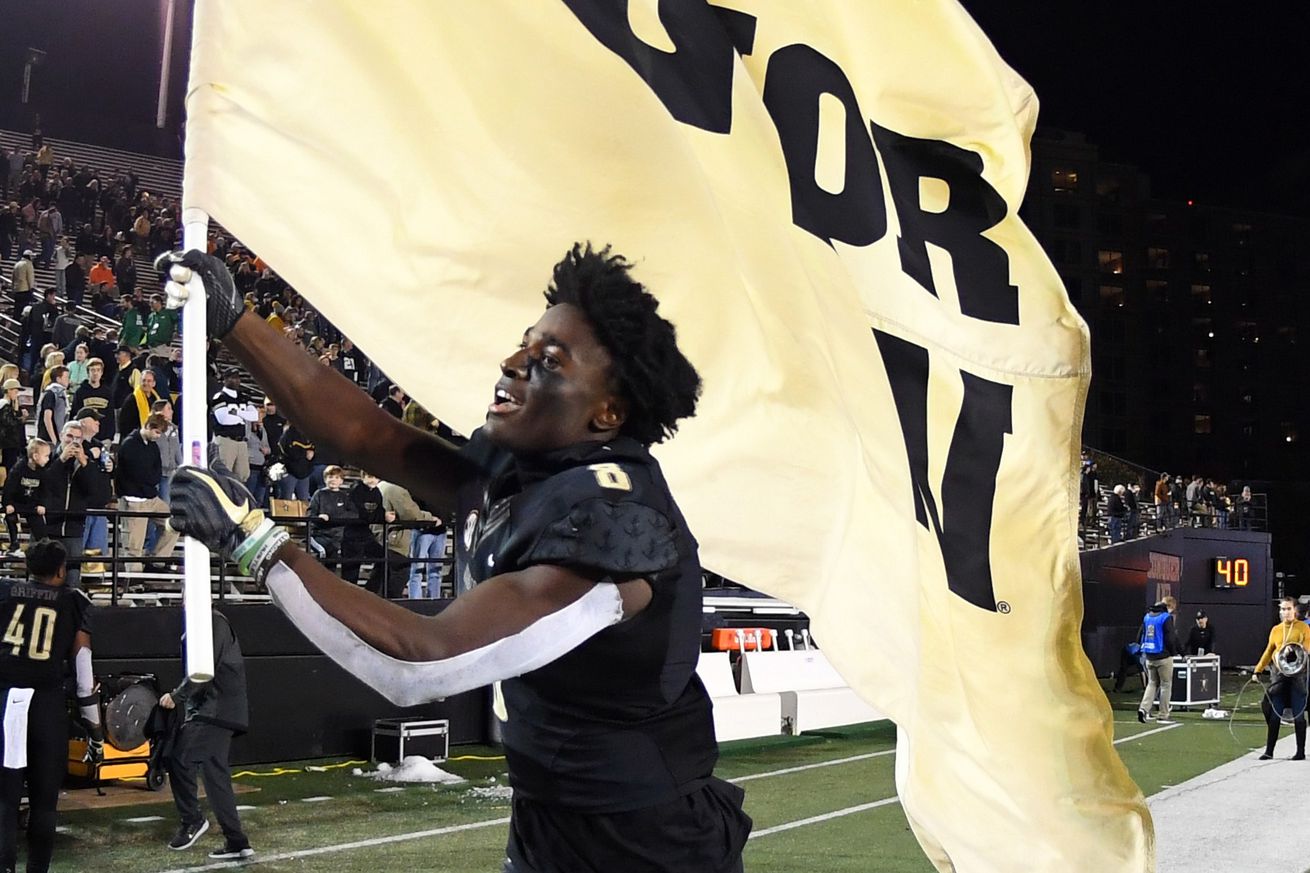 Read more: How Joejuan Williams fits into the Patriots offense

Cornerback was arguably the deepest position on the New England Patriots’ roster heading into the 2019 NFL draft. Led by a top-four consisting of All-Pro Stephon Gilmore as well as Jason McCourty, J.C. Jackson and Jonathan Jones, the personnel group combined playmaking ability, experience, and developmental upside — a that helped the Patriots field one of the best pass defenses in all of football last year.

And yet, the team invested in the position in the draft: with the 45th overall selection, the reigning Super Bowl champions picked Vanderbilt cornerback Joejuan Williams — the second straight year that New England invested in the position in round two after Florida’s Duke Dawson was picked 56th overall in 2018. Just like Dawson, Williams will have to fight for playing time on a deep and talented group this year.

What should help him in this battle is his unique physical build: at almost 6’4, Williams is the tallest of the Patriots’ cornerbacks and tailor-made to match up with outside receivers and tight ends. With that in mind, let’s take a look at his film to find out exactly what he brings to the table and how New England could harness his talents.

Williams sure knows how to use his size to play successful coverage, and combines it with the right mentality: he is a physical defender not afraid to lay down a hit, get his hands dirty in run support, or get in receivers’ faces in press-man coverage. The latter is perfectly illustrated on the following play against Ole Miss:

Physical jam impedes the receivers progress and he isn’t able to get any breathing room. Forces the QB to attempt a low percentage pass, which Williams does a great job adjusting to for the break up pic.twitter.com/ORPmYE14yI

Williams is patient and lets his assignment commit to a route before engaging, but once that happens it is essentially game over: the defender impedes the receiver’s progress towards the end zone by placing his hands on the shoulder pads and not letting go again. Simultaneously, he also has his eyes at the quarterback to make a potential play on the football should it be thrown his way — which it ultimately is in a low-percentage attempt the cornerback is able to break up.

Williams’ physicality also can be seen when it comes to his tackling. While is technique is not always consistent, his approach is: Williams wants to lay the wood.

Williams gives up too much cushion in his bail technique (tho that may have been a coaching decision), but makes a statement on the suplex, I mean tackle. Love the edge he plays with pic.twitter.com/onINinGOVT

On this particular play, he gives a up a bit too much cushion allowing Georgia wide receiver and fellow 2019 draftee Riley Ridley to make the grab. However, Williams is able to bring himself in position again and makes a statement by taking down the pass catcher — once again displaying the physical edge with which he approaches playing the game.

Physicality is a good attribute to have, but rather useless if you don’t know how to properly use it. Luckily for the Patriots, Williams does: he knows when to let go of his man and how to balance the fine line between playing in a physical way and committing penalties for holding or unnecessary roughness. This, in turn, should help him defend against bigger-framed receivers at the next level.

Williams’ energetic mentality is only one reason for his success at Vanderbilt and by extension status as a day-two draft pick: he also is an intelligent defender capable of reading plays quickly and reacting to them appropriately.

Recognizes the route concept and doesn’t allow the outside receiver to carry him too far upfield. Breaks on the out route and finishes by forcing the ball out. Great situational awareness pic.twitter.com/zby7j16inP

On this play against Ole Miss, Williams — aligning on the near-side boundary — reads the route concept perfectly and does not allow the outside receiver to carry him too far up the field. This, in turn, allows him to play the out-route underneath and eventually come in to make a play on the ball. If not for the defender’s awareness, the offense would likely have turned this 2nd and 9 situation into a new set of downs.

The following play is another example of Williams being able to react to the play properly and break up a pass:

Fantastic play here. Again playing the role of underneath defender in cover 2. Reads the quarterback’s eyes and drops back up the pass. pic.twitter.com/wwYvkWoiQi

Playing off-man coverage, he passes his man off to the strong-side safety in Vanderbilt’s high-low coverage concept. However, he subsequently stays in position to defend the pass thrown his way: this in combination with him reading the quarterback and his length allows Williams to successfully get his hands on the football, forcing an incomplete pass — a perfect illustration of the second-round pick’s skill set.

For a player his size, Williams brings a solid athletic skill set to the table even though his 4.64 40-yard dash at the combine — the third slowest among cornerbacks — can be seen as a red flag. On the field, however, he regularly displays good closing speed when out of position:

Here he is as the underneath “cloud” defender in cover 2. Good closing speed to force another incomplete pass against the curl route pic.twitter.com/MzCVbs21pA

Williams again starts the play as an off-man defender before playing a trail-technique. His assignment is not running a deep pattern towards the goal post, however, which means that the defender will need to put his foot in the ground and re-direct against the curl route. Williams is able to do that and in turn tackle the targeted receiver and pop the football loose.

Being able to do that is a result of Williams’ rare blend of hip flexibility, quickness and body control for a player his size. All of this is on display on the following play against Georgia:

Williams has rare hip flexibility, quickness and body control for his size. Opens to the inside anticipating an in-breaking Route, but quickly flips back outside and stays in position to contest the curl. pic.twitter.com/PJKqdaFEfZ

Playing one-on-one man coverage, the Commodores’ defender is quickly able to re-route after opening the inside against a potential in-breaking route. This allows him to successfully get his hands onto another target on a curl route.

Projecting Williams’ growth in the NFL from his college tape can be difficult, but he certainly has some intriguing athletic skills given his unique size. This should help him transition to the next level and against offensive players that are faster and quicker than those he oftentimes had to square off against in college.

As with every rookie, there is still room for growth when it comes to entering the NFL. The following three plays illustrate areas that Williams and his coaches in New England will have to address to turn him into a starting-caliber cornerback. The first issue is, as mentioned above, his tackling form:

Love that Williams enjoys getting his nose dirty, but he’ll need to work on his tackling technique at the next level. Will often wrap up too high, which makes it hard for him to bring down ballcarriers quickly. pic.twitter.com/1xAsAHLXDw

Oftentimes, Williams will wrap up the ball carriers too high making himself susceptible to being shaken off again. The issue, of course, is no major problem and more a question of coaching and experience — and with the Patriots putting a premium on tackling technique, it would not be a surprise to see the rookie get significantly more consistent in this area of his game.

The same has to be said about his press-man technique:

This play highlights Williams’ biggest weaknesses, which are very similar to what JC Jackson struggled with early last year.

Punch is too far outside the receiver’s frame, which allows the receiver to brush off the contact. Should turn his head knowing the WR is running out of.. pic.twitter.com/CllxhrDzGr

Here, Williams places his jam too far to the outside of the wideout’s frame which allows him to chop the defender’s arm off and get a relatively free release considering the defensive scheme. Furthermore, Williams should have turned his head knowing that wide receiver was running out of room, but he gets too handsy and as a result fails to locate the football in the air. But credit where credit is due: the receiver also made an outstanding catch.

Finally, one of the biggest questions surrounding Williams as he enters the NFL is about his straight-line speed. As mentioned above, he ran only a 4.64 40-yard time at the combine and at the next level, this could become a problem.

Questions about Williams’ long speed are legit. Don’t think the 4.6 he ran is indicative of his play speed, but he does need help if he’s gonna be facing faster receivers, which will be easier with Gilmore lined up on the other side pic.twitter.com/F3DsFjQIeX

Luckily for both Williams and the Patriots, he will likely not be matched up against speedsters all too often: New England has a diverse group of cornerbacks, and speedier options such as Stephon Gilmore and Jonathan Jones will likely be given the assignments against quicker and faster players. Furthermore, the Patriots’ deep-field safeties — Devin McCourty and Duron Harmon; possibly Jones as well — can help out in the case Williams needs to go one-on-one against a faster player.

All in all, the Patriots invested in an intriguing player with plenty of upside. If Williams can clean up his tackling and jamming technique, he should become a serviceable option against tall receivers. It will certainly be interesting to see how New England’s defense will use the rookie in 2019, and how his growth continues beyond this season.