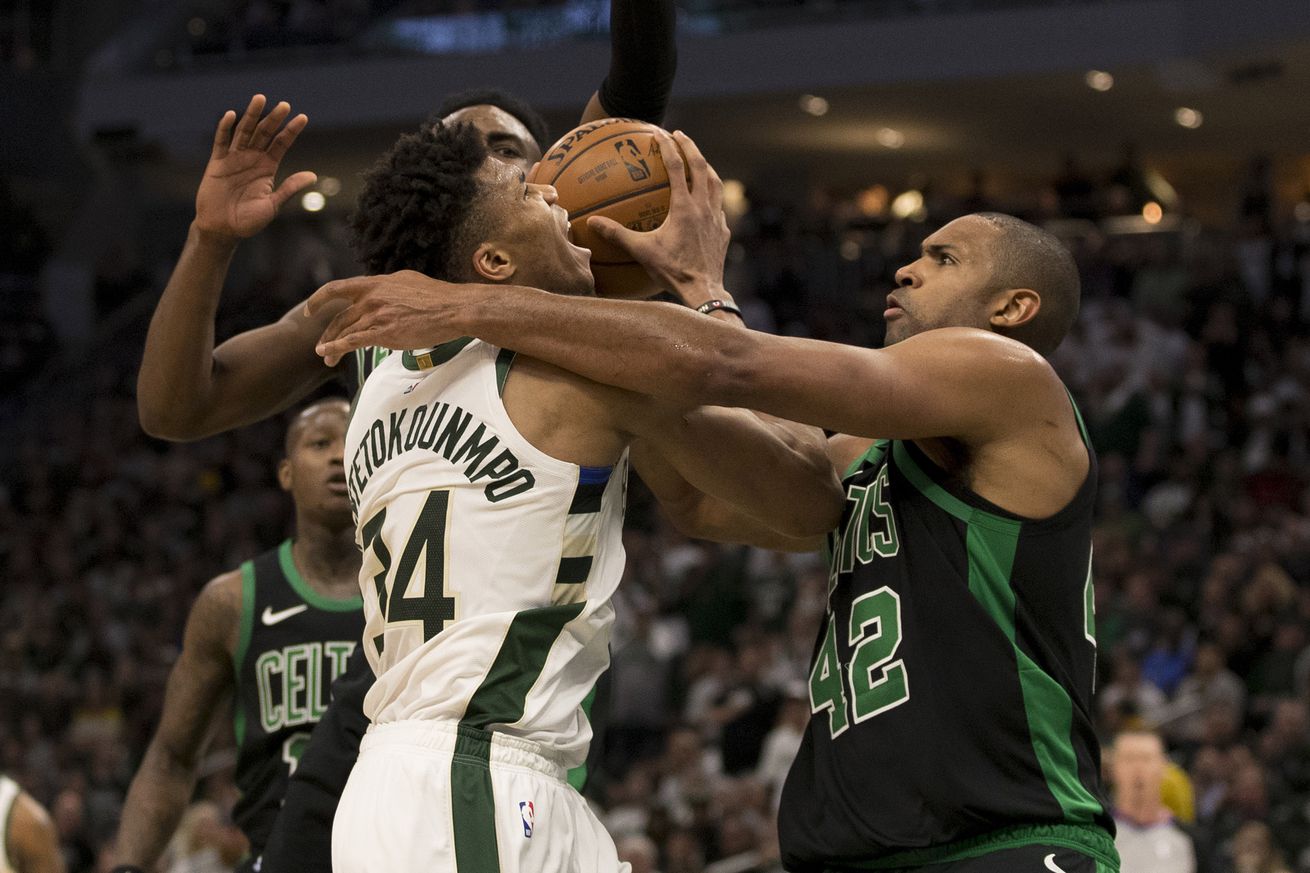 The series shifts to Boston with the teams tied 1-1, making it a 5 game series with the Celtics now having home court advantage. The Celtics blew out the Bucks in Game 1 but the Bucks came back with a blow out of their own in Game 2. The Celtics are hoping that getting back to their own home court will also help them get back on track.

After insisting that he wasn’t going to make any adjustments after losing Game 1, Bucks coach, Mike Budenholzer, did make changes and it seemed to throw the Celtics off their game. He started Nikola Mirotic in place of Sterling Brown, and the Bucks started to switch on defense. Now it’s Brad Stevens’ turn to make adjustments.

Kyrie Irving had the worst playoff game of his career in Game 2, shooting just 4-18 and scoring just 9 points. Jayson Tatum has yet to have a good game in this series, scoring just 9 points and shooting 4-17 over the 2 games in Milwaukee. Hayward was just 1-5 and Rozier was just 2-10 in Game 2. They are bound to shoot in this game.

The Celtics should have no lack of inspiration or motivation to win this game. First of all, it is the playoffs and a loss would give home court advantage right back to the Bucks and would also put the Celtics behind in the series. Marcus Smart is getting close to a return and may be cleared to play on Monday or Wednesday. They could win one for Marcus.

With Danny Ainge recovering from a heart attack that he suffered in Milwaukee on Tuesday, they could very well want to win one for Danny. It would be nice to have a big blowout to keep Danny from having to stress. They would do well to adapt his scrappy, instigator attitude in his honor against these Bucks.

Al Horford vs Giannis Antetokounmpo
This matchup is key for both teams. Although on paper, Morris is matched up against Antetokounmpo, it has been Al Horford who spent most of the time guarding him in Games 1 and 2. It has been a team effort to guard the probable league MVP. The Celtics will need Al to continue to do all the things that he does on both ends of the court to help the Celtics win.

Kyrie Irving vs Eric Bledsoe
Kyrie had a great Game 1 with 26 points, 11 assists and 7 rebounds. He also held Bledsoe to 6 points on 1-5 shooting with 2 rebounds, and 4 assists. Game 2 was a completely different story, however. Kyrie scored just 9 points on 4-18 shooting with 5 rebounds, 4 assists, and 3 turnovers. Bledsoe had 21 points on 7-12 shooting. The Bucks will likely double Kyrie once again and he will need to be aggressive on the defensive end and figure out the Bucks’ defense because the Celtics need a return of Playoff Kyrie if they hope to win this game.

Honorable Mention
Jayson Tatum vs Khris Middleton
Middleton had big games last season for the Bucks. He was held to 16 point on 5-12 shooting to go with 10 rebounds and 6 assists in Game 1 but he erupted for 28 points and 7 rebounds in Game 2. Between last year and this year so far, Middleton is shooting 63% from beyond the arc. Tatum has struggled mightily on the offensive end in both games, scoring just 9 points total and going 0-3 from beyond the arc. The Celtics need more from Tatum, especially on the defensive end to keep Middleton from having another big game. Tatum has vowed to do better in this game and hopefully he will.

Rebound – Next to defense, rebounding is a key to winning. In Game 1, the Celtics out-rebounded the Bucks 51-44. In Game 2, the Bucks out-rebounded the Celtics 53-45. It isn’t surprising that the team that won the rebound battle won each game. Much of rebounding is effort and desire and when the Celtics put out the extra effort on the boards, it usually carries through to the rest of their game. The Celtics must continue to crash the glass as a team and give even more effort on the boards in this game.

No Let Up – The Celtics need to come out strong and play hard from start to finish. They can’t let the officiating, or a Bucks run, or a hostile crowd slow them down. In their first 5 games in the playoffs, the Celtics proved to be resilient and have handled whatever their opponents threw at them. In Game 2, when the Bucks went on a run, the Celtics lapsed into hero ball to try to get back into it and failed and that affected their effort on defense and the rest of their game. They must play hard team basketball from the opening tip to the final buzzer with no let up.

Coaching – Brad made the first move and completely took the Bucks by surprise by limiting Antetokounmpo. Budenholzer countered with his own adjustments, doubling Kyrie and switching on defense and that seemed to take the Celtics by surprise. Now it’s once again Brad’s move. Playoffs are a chess match and we will have to see which coach can make the winning moves.

X-Factors Home
Court Advantage – The Celtics now have home court advantage in the series after their Game 1 win in Milwaukee. The Bucks were 27-14 on the road in the regular season and are 2-0 so far in the playoffs on the road. The Celtics will depend on the Garden crowd to be loud and give them a boost while also rattling the Bucks. The Celtics need to make home court work for them and come out determined to defend their home court.

Officiating – Officiating is always an X-Factor. Sometimes the refs just miss things or sometimes they have an agenda. Some refs call a game tight and call every little bit of contact on both ends and sometimes they call it tight for one team but not the other. Sometimes they let both teams play and only call the most obvious infractions. It would be nice if they would call Giannis’ travels to the basket, though. The way a game is officiated can change the outcome completely. Hopefully the Celtics will get refs that call the game evenly and let both teams play.