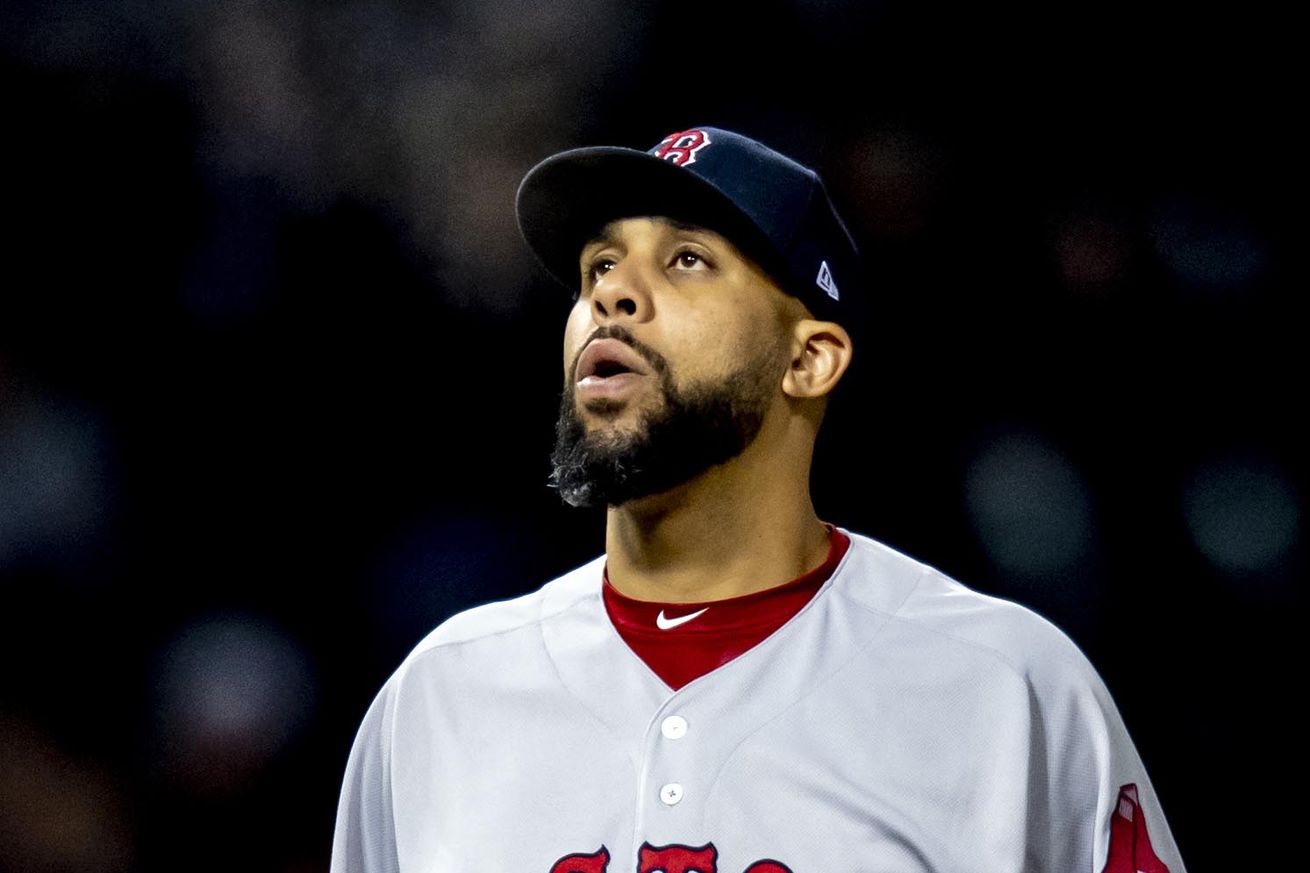 The Red Sox and White Sox faced off on Thursday for the first game in their four-game set, playing in some non-baseball weather conditions. It was cold and damp all night, with the “Real Feel” temperature on Accuweather reading at 37 degrees at first pitch. Presumably, it only got colder from there and it definitely got more damp with mist emerging in the late innings. Those are straight-up miserable conditions. Both teams had to play in the same weather, though, so it’s less of an excuse and more of a cry of sympathy for anyone who was outside for that. The Red Sox should have jumped out to a bigger lead early. They had a bunch of chances over the first four innings, getting one run pretty much every time but never opening it up. David Price, meanwhile, was solid but clearly affected by the weather. All of that put a lot of pressure on the Red Sox bullpen to protect a close lead. Brandon Workman and Matt Barnes were great, but Ryan Brasier couldn’t finish it off. Rafael Devers made a huge error that will get a lot of talk for opening the floodgates. That’s valid, but Brasier also made some bad pitches. Whoever you want to blame, however you want to slice it, the win streak is over.

The Red Sox started to look a lot more like last year’s version of the team earlier this week in their three-game sweep of the Athletics, particularly on offense. They were getting some breaks and plenty of chances early in the game, situations that ended in heartbreak for most of April. In this latest series, though, they were taking advantage and jumping out to early leads to take some pressure off their pitcher. They didn’t go fully down that road in this game, though that did get some runs across to give David Price a lead with which he could work.

That offense started right away in the top half of the first, going up against a guy in Lucas Giolito who was just coming off the injured list. The White Sox righty has shown better stuff than ever before in the majors, but the results weren’t there over the early part of the year. The Red Sox showed why in that preliminary inning, stringing together a bunch of baserunners. Mookie Betts ripped a single, J.D. Martine followed it up with a base hit of his own and Xander Bogaerts drew a walk. That loaded the bases with just one out for Rafael Devers. It was a chance to jump out to a huge lead, but the Red Sox would settle for a small one. Devers got one in with a sacrifice fly, but that was all Boston would score in the frame.

Meanwhile, David Price was not in conditions that are super conducive to his success. We all remember early last season, when Price’s stock in Boston was close to its all-time low, when temperatures dropped and Price was losing feeling in his fingers. He doesn’t do well in the cold. You could see it during this game, too, as he wasn’t equipped with his best stuff and he seemed to me (totally anecdotally) to be working even more slowly than usual.

Overall, despite all of that, Price did pretty well. His command was on point and he did a good job of mixing up his pitches, keeping the White Sox off-balance all night. However, he did cough up that early lead almost as soon as it was handed to him. Leury Garcia started the bottom of the first with a double, and after a couple of outs Price tried to sneak a high fastball by James McCann. On a normal day it may have worked, but the Red Sox lefty was sitting 90-91 most of the night with his heater. If that’s what you’re working with, you really want to go above the zone so even if the hitter catches up and makes contact it probably won’t be hit with much authority. Instead, Price hit the top of the zone and the ball carried as it has all along the league all year, landing in the seats and giving Chicago a 2-1 lead.

Now, it was on the Red Sox offense to try and snag that lead right back. Early in the season, that would have seemed like a lost cause. On Thursday night, it only took a couple innings. After both teams went down in order in the second, Boston got back to work in the third. Andrew Benintendi got it started with a 2019 home run special of his own, smacking a curveball that broke right into the meat of the strike zone and putting it over the wall in left field for an opposite-field home run. Just like that, the game was tied. Betts and Martinez followed that up with back-to-back singles for the second time of the game, and Devers once again came through with a productive out. The third baseman’s ground out put the Red Sox up 3-2.

With the lead now in hand, Price went to work and settled into a groove after that first inning. As mentioned above, he followed that up with a 1-2-3 second. After getting the lead in the top of the third, he allowed just a single in the bottom half of the inning and just a walk in the fourth. The fifth saw a leadoff single, but thanks to an inning-ending double play Price still only had to face three batters in the inning.

The Red Sox offense had fallen off after that, though, leaving four runners in scoring position over the first four innings and settling for just the three runs after six times at the plate. So, Price was back out for the bottom of the sixth and he got into some trouble. Jose Abreu started the rally with a one-out walk, and that brought McCann back to the plate. Price tried to sneak a 1-2 fastball by on the inner half, but the White Sox catcher drove another one out towards right field. This one stayed in the yard, but it fell in for a double. Fortunately for the Red Sox, the White Sox inexplicably sent the slow-footed Abreu home to try and score, and he was thrown out by a mile.

That was a massive break for the Red Sox as that swing should have tied the game, and now Price just had to get one more out to escape the inning with the lead still in hand. Instead, he gave up an infield single to old friend Yoán Moncada that was followed by another single from José Rondón, and just like that the game was tied. After a wild pitch pushed both runners into scoring position, Price got a huge ground out to end the inning, and his night. Again, this was far from the best version we’ve ever seen, but the veteran southpaw was solid.

Now, it was a battle of the bullpens with a tied game heading into the seventh. The Red Sox got going again in the seventh with the top of the order coming up, as Benintendi drew a leadoff walk and Betts smacked a single to put runners on the corners with nobody out. J.D. Martinez couldn’t get his fourth hit of the day here, but a fielder’s choice that cut Betts down at second got a run in to give Boston a 4-3 lead. Martinez did move up to second on a wild pitch, but he would be stranded there.

Brandon Workman then came on for the bottom of the seventh with the one-run lead in hand. He tossed a 1-2-3 inning. After the Red Sox went down in order in the eighth, Matt Barnes came on for the bottom half of the inning and the middle of Chicago’s order coming up. He came through with a perfect inning of his own.

Finally, it was all up to Ryan Brasier in the ninth with the same one-run lead. He got into some trouble that wasn’t seen by the first two Red Sox relievers. The trouble started with one out when a ground ball to third popped out of a charging Devers’ glove for an error, putting a runner at first base. Yonder Alonso followed that up with a base hit into left field, and suddenly Chicago had runners on the corners with one out and were a deep fly ball away from tying this game up. Nicky Delmonico did them one better, blasting a hanging slider out over Jackie Bradley Jr.’s glove in center field to walk it off for the White Sox.

Boston and Chicago will face off again on Friday for the second game of this series with the Red Sox looking to bounce back from this tough loss. They’ll have Chris Sale on the mound for that one as the White Sox counter with Reynaldo López. First pitch is at 8:10 PM ET.

Over The Monster https://www.overthemonster.com/2019/5/2/18527698/red-sox-white-sox-ryan-brasier-rafael-devers-david-price-nicky-delmonico
Categories: Sports