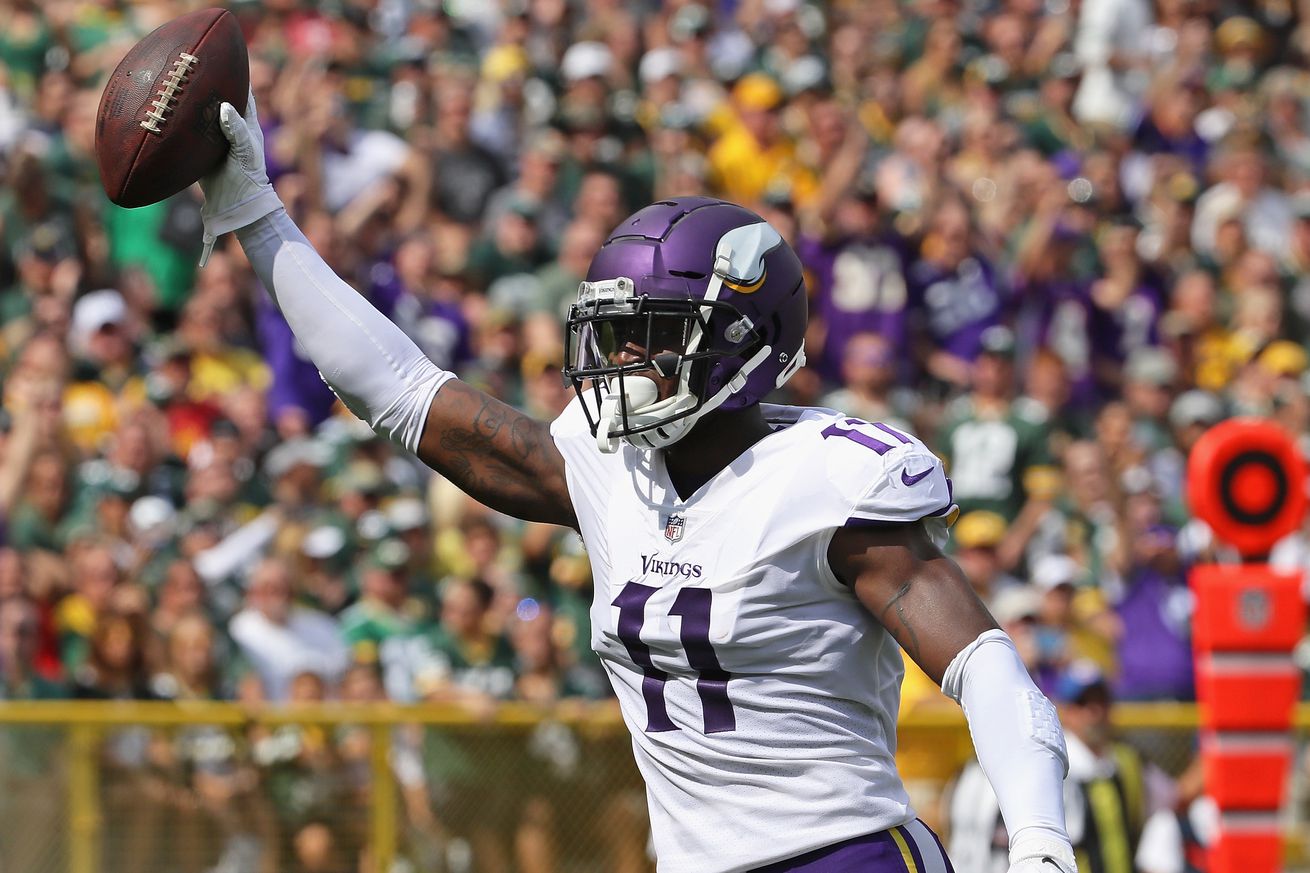 Twelve players did not see the option exercised.

With the New England Patriots not holding a first-round pick in the 2016 NFL draft — thanks, Deflategate — they did not have to make a decision this year when it came to a fifth-year contract option. Those clubs who do have first-round selections from that year on their roster that are still on their rookie deals, on the other hand, had to make a call on the option until today. For twelve players, the call made by their clubs was a decline.

This means that they are all scheduled to hit unrestricted free agency after the 2019 season. It also sparks the question whether or not the Patriots would be interested in acquiring their services either via a trade this year, or through the open market in ten months. Let’s take a look at the players who did not have their fifth-year options exercised to find out.

The Titans’ starting right tackle had a successful rookie season in 2016 and was even voted to the first All-Pro team. However, he was unable to build on his first NFL campaign: Conklin’s pass-blocking remained a liability and injuries prematurely ended both his 2017 and 2018 seasons. That being said, the 24-year-old flashed potential early in his career and could rebound in the right system and a new environment.

Originally drafted by the New York Giants, Apple was traded to the New Orleans Saints last October. He apparently did not do enough for the team to justify picking up his fifth-year contract option, though. Consistency has been the major issue when it comes to the 23-year-old, but he also comes with his fair share of questions about his locker room behavior and durability. Nevertheless, Apple’s talents as a defensive back cannot be denied.

With the Raiders adding both Lamarcus Joyner and Johnathan Abram to their defensive backfield this offseason, Joseph will likely be pushed down the depth chart — despite showing some flashes as a run-defending box safety over the course of his career. His pass coverage continually left much to be desired, however, which is why Oakland will likely head into another direction following the season.

Lawson’s case is similar to Conklin’s, only on the other side of the ball: he had some success in the running game over the first three years of his career, but has been highly inconsistent when it comes to playing the pass. Furthermore, Lawson has yet to play a full regular season since entering the NFL out of Clemson. He has good size and some solid measurables, but not yet lived up to his first-round status.

When the Jets drafted Lee with the 20th overall selection three years ago, they did so in large part to have a counter against Rob Gronkowski: Lee was an undersized but hyper-athletic prospect capable of covering tight ends one-on-one — or so the team thought. Three years into his career, Lee has yet to show the upside New York saw in him, especially when it comes to his passing game contributions.

After missing most of his rookie season due to an issue with his Achilles, Doctson appeared in 31 games for Washington and failed to establish himself as the number one receiver he was drafted to be: in his two healthy seasons in the NFL, he caught only 79 combined passes for 1,034 yards and 8 touchdowns. Not necessarily terrible numbers, but far from what you would expect from a 22nd overall selection. Maybe the arrival of first-round quarterback Dwayne Haskins will change Doctson’s career trajectory, though.

Treadwell did also not see his fifth-year option get picked up by his club — a rather unsurprising decision considering his career output so far: he appeared in 42 combined regular season and playoff games, but caught a mere 56 combined passes for 517 yards and only one touchdown. Those numbers would be pretty mediocre for a single season, let alone three combined. Failing to consistently get open (and on the field), Treadwell has shown little to justify his draft status.

Burns had his moments since getting picked 25th overall by Pittsburgh, but appears to be on his way out of town: he played a career-low 29.5% of the Steelers’ defensive snaps last year and ultimately did not see any defensive playing time in seven of his team’s final ten games. Primarily a special teamer at this point in his career, it would not be a surprise if Burns did not even make it out of training camp this summer.

Garnett’s story in the NFL has been one of injury: since starting eleven games at right guard during his rookie season, he was on the field for only 59 offensive snaps and 16 more on special teams. While Garnett can still salvage his career three years in, he did obviously not do enough to earn a fifth year added to his rookie deal — one guaranteed for injury. He will get another shot at a starting role in 2019, however.

Looking like he was built in a lab with the sole purpose of terrorizing offensive linemen, Nkemdiche has so far underperformed in the NFL. Inconsistent performance led to inconsistent playing time, which now led to the Cardinals declining his fifth-year option. Maybe Nkemdiche can build on a 2018 season that was the best of his career — as if that is saying a lot — but at this point it should not be expected.

Like Nkemdiche, Butler has also underperformed despite some terrific athletic skills. However, those bring you only so far and combined with his inconsistent technique against the run and obvious weaknesses versus the pass make for a lethal combination. Butler will be given a chance to prove his value to the Panthers — or any other team — in 2019, but so far he has disappointed at the NFL level.

Like numerous names on this list, Ifedi struggled with consistency ever since entering the NFL as a first-round draft pick. While his pass blocking improved slightly through his three years in Seattle, his run-blocking — especially in a system like the one the Seahawks ran the last three years — proved to be inconsequential at best. As a result, the team would not commit to the 24-year-old beyond the 2019 season.

So where does all this leave us in regards to the Patriots? Frankly, the cupboard of 2016 first-round talent available is rather bare despite plenty of options potentially available via trade or at the latest next year’s free agency. The reason for that goes beyond the obvious questions attached to the twelve men named above: some of the ‘best’ options play positions New England does not necessarily need to address.

Take offensive tackle. While Jack Conklin and Germain Ifedi could turn into the next Dante Scarnecchia reclamation products, the Patriots have just invested high-end draft picks in the position in back-to-back years: Isaiah Wynn was picked in the first round in 2018, Yodny Cajuste in the third last week. While New England could still swing a trade for one of the two, the belief at this point in time is that the starting left tackle job will be Wynn’s to lose.

When looking at the least from a purely need-based perspective, therefore, we can see plenty of question marks. The Patriots could benefit from wide receiver help, but neither Josh Doctson nor Laquon Treadwell have proven themselves more than depth options at this point in their careers. Sending a late-round pick to their respective teams might be worth a shot, but probably still not worth the investment.

The same has to be said about defensive tackle: Robert Nkemdiche and Vernon Butler look like they could be viable depth options benefitting from a smaller, rotational role, but would they be worth a) a draft pick or player in exchange for their services, and b) cap hits of roughly $1.6 million in 2019? Probably not considering how their careers went so far and what the Patriots ask of their interior defensive linemen in terms of technique and gap discipline.

After subtracting cornerbacks Eli Apple and Artie Burns, guard Joshua Garnett, and front-seven defenders Shaq Lawson and Darron Lee — their positions are pretty deep in both the short and the intermediate term — we are left with one player that might be interesting to New England: Raiders safety Karl Joseph, who has shown some flashes as a box safety similar to the Patriots’ Patrick Chung.

Chung plays the position at a higher level than Joseph, of course, especially when it comes to pass coverage. But with the Patriots not adding a box safety during this year’s draft, they might look elsewhere for potential reinforcements at the position. The 25-year-old could be just that, but the question of value once again has to be asked: is sending capital to Oakland for a developmental player at a position of minor need really worth the investment?

Ultimately, one should therefore not expect the Patriots to target members of the 2016 first-round class just yet. Things could obviously change over the course of the next few months when it comes to need in comparison to potential cost — the trade window closes in late October — but as things stand right now neither Karl Joseph nor Jack Conklin nor Laquon Treadwell nor any other of the twelve players will likely walk through the Gillette Stadium door anytime soon.