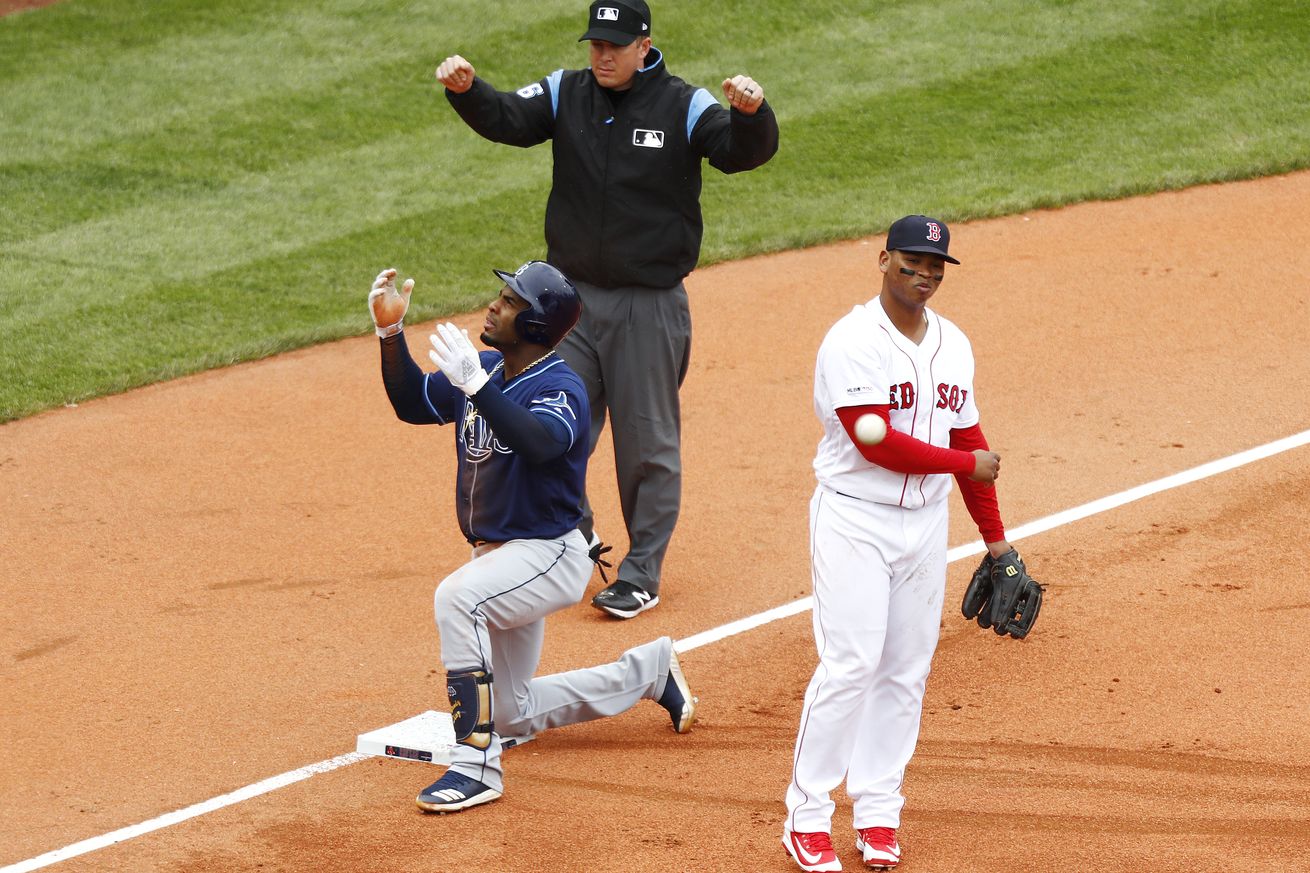 There are a few different categories of posts I write on here with different goals. Sometimes, I have a point I know I want to make. Those are pretty straightforward. In others, I start with a question and seek out an answer I believe I can figure out with my own research. At other times, I will again start with a question but doubt I can find a good answer myself yet hope others might be able to come to their own conclusions. Sometimes I just type words until I feel like I should just stop typing words. This time, I’m starting with a question, but it is one to which I don’t think anyone has a good answer. I know that I’ve thought a lot about this question of Rafael Devers’ defense and some changes to deal with it, and I have yet to have a satisfying “a-ha” moment. Baseball is complicated sometimes, ya know?

Anyway, Thursday seemed like it was shaping up to be a great night for most of the game as all signs pointed towards a fourth straight Red Sox win. Then, they lost on a walk-off and the mood quickly bottomed out. Most of the talk after the bad bottom of the ninth surrounded Devers, who made yet another error to start the White Sox rally. Don’t get me wrong, it was a terrible play that has to be made. There is no arguing that. Still, it feels like a little too much of the blame is being put on the third baseman and being deflected from Ryan Brasier, who still gave up a hard-hit single and a home run to a pair of hitters who, frankly, aren’t the great. Devers’ error made things a lot more difficult, but it wasn’t the only reason they lost Thursday’s game.

Regardless, what it undeniably was was a continuation of a trend we’ve been watching since Devers first came up to Boston. His glove has been the topic of conversation for a long time now, and it’s very rarely been for a good reason. Frustratingly, the issues always seem to come on easy, routine plays, something Alex Cora has mentioned a lot this year and talked about again after Thursday’s loss. Even with his manager publicly mentioning the issues, Devers hasn’t turned it around.

Somewhat amazingly, in a morbid way if you’re a Red Sox fan, Devers already has nine errors to his name after playing in just 32 games. If he were to keep this pace over 150 games, he’d commit 42 errors on the year. Butch Hobson (also on the Red Sox) in 1978 is the only player to reach that mark over a full season since the start of World War II. Granted, it’s probably safe to expect Devers to get off this pace by at least a little bit, just because of how bad it’s been, but it doesn’t change the main concern: He’s a liability on defense on far too many plays. It’s doubly frustrating, too, because at times he makes the amazing plays. Even on Thursday, early in the game he made a really nice snag behind the third base bag then made a perfect, long throw all the way across the diamond to get the out. That’s not an easy play! It’s mind boggling that he makes plays like this somewhat regularly while also botching the easiest of plays on a regular basis. We’ve discussed this before, but it seems to be a timing and youth issue with most of these plays. On Thursday it was more of the latter as he sort of stabbed at the ball a little too much, causing it to bounce out of his glove.

We know all of this, though. It was easier to deal with when he first came up, and while he’s still only 22 years old — it’s really easy to forget just how young he still is — he has enough experience where it can’t keep being an excuse. Unfortunately, there just don’t seem to be a lot of options here. Let’s quickly run through the different ways they can *Extremely Stephen A. Smith Voice* address this issue.

Looking at all of those options….nothing feels great! To me, as you may be able to tell, the first option does appear to be the best, though. It’s not very satisfying, but like I said at the top I don’t have a good “a-ha!” solution here. All I can think of is to keep doing what you’re doing, hoping for better results. At this point, it’s really on Devers to simply be better. A minor tweak would be using a defensive replacement for the third baseman late in games. That will be easier to do when the injured players start coming back, as I think Eduardo Núñez’ bad defense at second base has made his third base defense a little underrated. Ultimately, though, the Red Sox need at bats from Devers, whose numbers seem poised to explode at some point soon. Unfortunately, that means dealing with his absurdly frustrating defense, and as we saw on Thursday it can go from frustrating to straight-up costly.

Over The Monster https://www.overthemonster.com/2019/5/3/18528063/rafael-devers-errors-defense-third-base-first-base-position-change
Categories: Sports