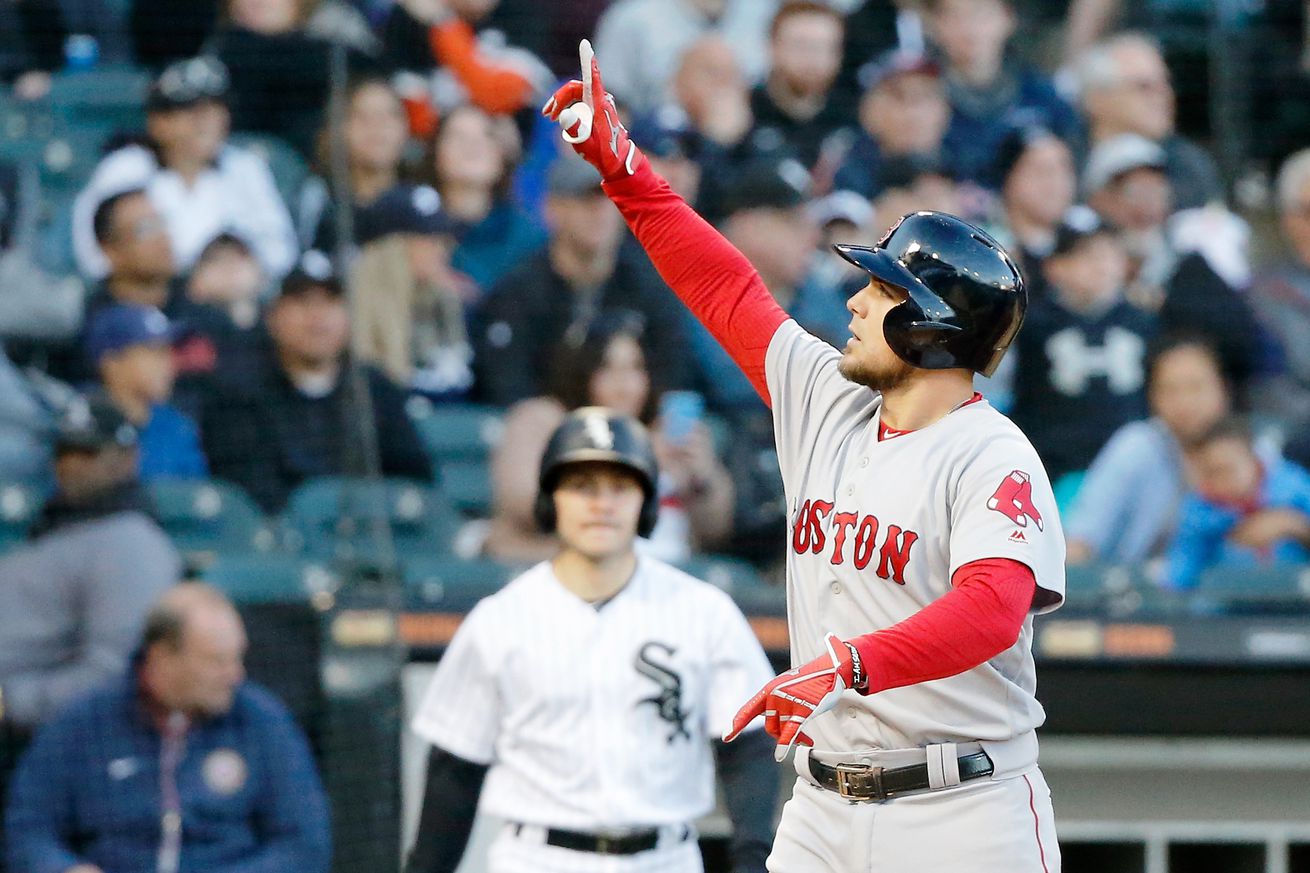 This certainly was a baseball game. For those who follow run differential and use that to base teams’ talents early in the year, you may have a different view of the Red Sox now. Boston put the White Sox away early and in emphatic fashion with a wild nine-run third inning. It wasn’t just that they scored nine, either. It was that it was all with two outs, and it came after White Sox starter Manny Bañuelos had retired the first eight batters of the ballgame. Michael Chavis led the charge with four hits including two home runs, with Christian Vázquez contributing four hits of his own while Andrew Benintendi got three plus a walk. Eduardo Rodriguez didn’t have to worry too much about losing that lead, but he got over a somewhat rough start and settled in over the latter portion of his outing to put together a quality start. Everything’s comin’ up Milhouse!

You wouldn’t believe it by the looks of the final score, but this game actually got off to a pretty frustrating start for the Red Sox. Granted, it was a relatively short period of time and things never really got that bad, but Boston didn’t look great early on. They went down in order in the first two innings in which they got a chance to hit, and none of their at bats were particularly competitive.

On the other side, Eduardo Rodriguez looked pretty rough in the early going and likely would have gotten punished more by a better lineup. He wasn’t commanding much in the first inning, and he wound up allowing singles to two of the first three batters he faced. That was enough to give Chicago a 1-0 lead, too. In the second, Rodriguez came back with another tough inning, though again he wasn’t punished too badly. Yoán Moncada started it off with a single, and then after two outs the White Sox got a bit lucky. Ryan Cordell reached on an infield single that was originally called an error on Bogaerts. Right after that, Nicky Delmonico hit a soft ground ball that went away from the shift for another infield single, and the bases were loaded. Fortunately, Rodriguez avoided any more runs being added to the scoreboard in that inning by inducing an inning-ending ground ball.

Then, in the top of the third, the game turned on a dime and in shocking fashion. The first two Red Sox batters of the inning did get out, making it eight straight retired batters to start the frame for Manny Bañuelos. That wouldn’t last. Christian Vázquez broke the streak with a single, then Andrew Benintend hit a single of his own. After that, Mookie Betts ripped a double into the left field corner to give the Red Sox a 2-1 lead. It would only keep going. J.D. Martinez hit a double. Xander Bogaerts hit a home run. Michael Chavis hit a home run. Rafael Devers hit a double. Steve Pearce hit a single. Eduardo Núñez hit a home run. Christian Vázquez hit a single. By the time the dust settled, the Red Sox went from eight up and eight down to ten straight hits and eleven straight baserunners, and they had an absurd 9-1 lead thanks to the two-out rally. Bañuelos was out there for all ten hits, too, which is crazy on its own and even more so when you remember the White Sox used a position player in a five-run game the night before.

They didn’t let up after that third inning, either. In the fourth, they got two walks to lead off the inning, then Chavis knocked in another run because he is out of his mind right now. The White Sox then made two errors with a single sandwiched between them, and Boston had put four more on the board. They’d get one more in the inning on a Benintendi double, then another in the following inning on yet another Chavis home run. Again, he is out of his mind. By the time the Red Sox had come to the plate five times, they’d plated 15 runs.

After that explosion in the third, Rodriguez suddenly had very little pressure on his performance. Still, to his credit he did look much better. The lefty suddenly started attacking and was getting quicker outs and innings. After sitting for a long time in the top of the third, he came out with a 1-2-3 inning in the bottom half and then did the same in the fourth. Rodriguez did load the bases with just one out in the fifth, but a double play allowed him to escape that potential jam. Finally, he got another 1-2-3 in the sixth, and that was the end of his night. Ultimately, the southpaw tossed six innings in which he allowed just the one run on six hits (all singles) and two walks with six strikeouts. Again, I though he fell into some bad habits early in not attacking, but he settled in and looked better as the night went on.

After Rodriguez left, Tyler Thornburg got the ball. The righty has been relegated to mop-up duty until further notice, and he did get a 1-2-3 frame in his first inning of work. In his second, however, he gave Chicago their second run of the night on a solo home run from José Abreu. Hector Velázquez got the ninth and he came through with a scoreless inning to finish it off.

The Red Sox can grab a series victory on Sunday with a third consecutive win over the White Sox. They’ll send Rick Porcello, coming off his best start of the year, to the mound while Chicago counters with Dylan Covey. First pitch is scheduled for 2:10 PM ET.