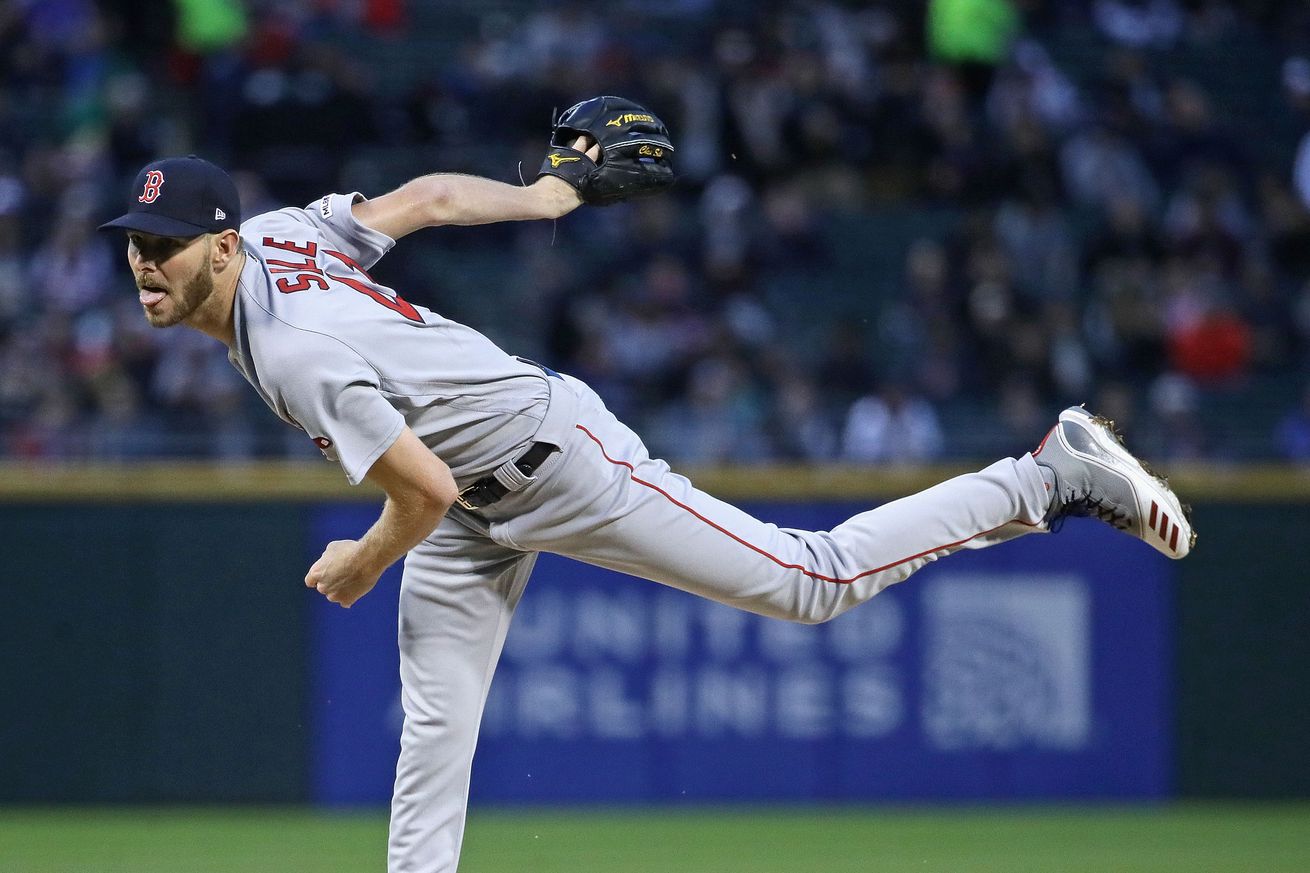 And Rafael Devers and Michael Chavis both destroyed baseballs.

The Red Sox probably should have been looking for their fifth win in a row on Friday night, but thanks to a late-game implosion (and game-long malaise from the offense) on Thursday, they’d have to settle for four wins in five games. This was a relatively easy one for Boston, with Chris Sale looking as good as he did all year. It was the kind of night we’ve all been waiting for from the ace, who still wasn’t quite as sharp with the slider as he is at his best but still racked up ten strikeouts in six scoreless innings. Meanwhile, the offense got a couple of the big swings that were lacking the night before with both Rafael Devers and Michael Chavis each launching absolute moonshots of home runs. Good times.

Thursday’s series opener in Chicago was brutal in just about every way imaginable. It was brutal before it even started because it felt like an end-of-fall day with cold and damp weather. By the end of the game it felt like low-30s temperatures with a heavy mist in the air. On the field, the Red Sox failed to come through with big hits to break open a big lead, Rafael Devers made a brutal error to open the floodgates in the ninth and Ryan Brasier gave up a couple of big hits including the walk-off homer. It wasn’t what you want.

It was Devers who got the brunt of the blame for the implosion, and while it was a bit unfair it was also hard to blame people considering just how often he’s made bad errors like the one in that ninth inning. So, as we headed into Friday’s game, the Red Sox were looking for a bounce-back but Devers was even moreso. He wanted to make up for his mistake, and he did so in a big way. Boston started things off in the top of the first with a two-out rally, starting with back-to-back base hits from J.D. Martinez and Xander Bogaerts. That put two on for Devers, who got a fastball right down the heart of the plate from White Sox starter Reynaldo López. He was still waiting for his first home run, but Devers wouldn’t be waiting much longer. He absolutely demolished the pitch, putting it 436 feet to straightaway center field. That gave Boston a 3-0 lead, and let Devers breath a little more easily.

After that smash, Chris Sale took over the show in his former home. The lefty was back where it all began for him, and he put together one of the more complete starts we’ve seen from him. He still struggled a bit compared to Peak Sale, but it was hard to complain about what we saw. The Red Sox ace was sitting in the 92-94 range with his fastball, getting up to 96 on one occasion, and also throwing a decent slider. It wasn’t the wipeout, whiff-inducing machine we’ve gotten used to, but the command was solid and it got plenty of strikes even if most were looking.

In his first inning of work, there were some signs of concerns at it took 22 pitches to get through the frame. That was a bit misleading, however, as it was largely because of a great, nine-pitch at bat from José Abreu. He issued a walk at the end of that plate appearance, but it was the only runner he allowed in the inning. Sale then followed that up by allowing just one runner over the next two innings, getting his pitch count back under control a bit.

After allowing his first hit in the form of a single in the fourth but nothing else, Sale found himself in his first bit of real trouble in the fifth. The score was still 3-0 at this point, and the southpaw started the inning off by allowing a double to José Rondón. Sale then hit Welington Castillo, and there were two on with nobody out. With the way this season has started, it was easy to brace yourself for a big inning and at least a tied score. Instead, Sale flipped the script and struck out three batters in a row to keep the shutout going.

As you probably guessed by the fact that the score had not changed since the top of the first, the offense didn’t do much of anything in the middle innings. The one notable moment was a negative one, when Tzu-Wei Lin was caught stealing on a strike-him-out throw-him out play. It wasn’t just the double play, though, as Lin got his leg caught up in the dirt a bit and hurt his knee. It was just described as knee soreness as of this writing, but Eduardo Núñez is currently en route to Chicago, indicating Lin will probably miss some time.

After Sale got out of that jam, though, his offense got him a little bit of breathing room. Devers started the rally this time around by smacking a single through the right side, and that brought Michael Chavis to the plate. He has some power, in case you haven’t noticed, and he put it on display here. López hung a slider right over the plate and he obliterated it down the left field line for a 459-foot home run, extending the lead out to five. The Red Sox would load the bases against the White Sox bullpen after that, and Mookie Betts drew a walk to put his team up 6-0.

Sale came back for one more inning in the sixth and put a cherry on top of his outing. He did allow a double to prevent a perfect final frame, but he also struck out two batters. By the end of his night he had tossed six shutout innings in which he allowed just three hits and one walk (and a hit batter) while striking out ten. That’s the Chris Sale we’ve been looking for.

From here, it was on the bullpen to simply not implode. Heath Hembree got the call for the seventh and he got through a 1-2-3 inning that included a pair of strikeouts. The eighth belonged to Colten Brewer. He was not very good, walking two and allowing a single to break up the shutout. After Rondón, the infielder, inexplicably came in to pitch in a five-run game (and kept the Red Sox off the board). For the ninth, Josh Smith finally made his major-league debut to close out the win, and he did so with a scoreless inning.

The Red Sox will look to keep the good times rolling on Saturday night with the third game of this four-game set. For that one Boston will send Eduardo Rodriguez to the mound to take on Manny Bañuelos. First pitch is scheduled for 7:10 PM ET.

Over The Monster https://www.overthemonster.com/2019/5/3/18528977/red-sox-white-sox-chris-sale-rafael-devers-michael-chavis
Categories: Sports