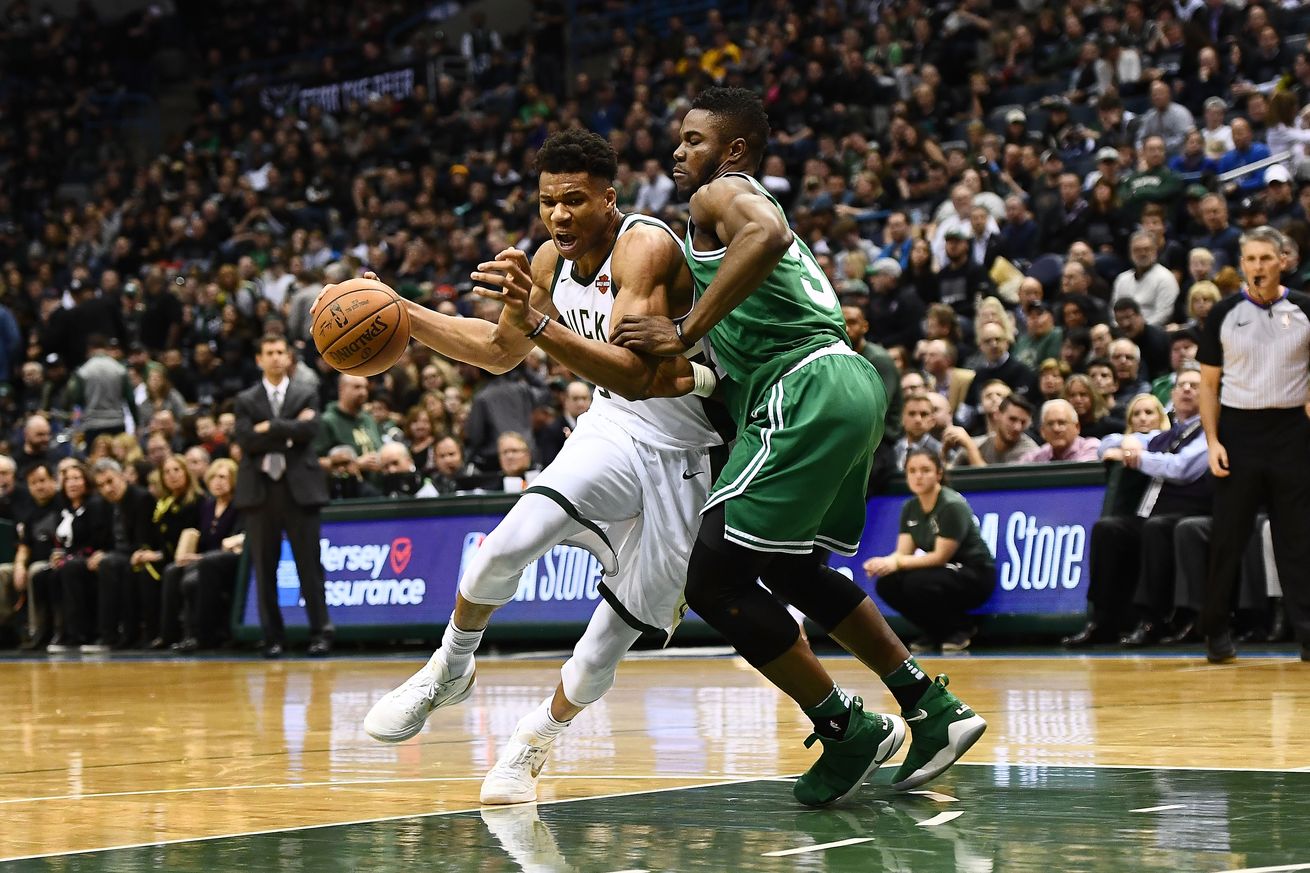 In a series where nothing comes easy, the Celtics must control what they can control.

As much as complaining about the officiating took center stage in the Celtics’ 123-116 loss to the Bucks, the B-side to Boston’s post Game 3 comments were a collective belief that they can better on Monday and will be better on Monday.

“The refs have a difficult job. We have a difficult job. Obviously, I could sit up here and complain. We know the disparity and what it is, but I’m not going to put all the emphasis on the refereeing,” Kyrie Irving said regarding Milwaukee’s third quarter production that saw them go to the free throw line 17 times, including eight trips for Giannis Antetokounmpo.

“I think there are a lot of controllable things on our end that we can be better at. Obviously the officiating is going to be part of it. Hopefully, you wish that things could go your way, but they don’t and we have to be able to respond better and we’re going to do that in Game 4. I’m confident in this group. I’m confident in the talent we have here and the basketball IQ. We just have to bring it to another level, just being in the right spots and really focusing on where we can take advantage on their defensive miscues.”

As much as Boston can make a case that the officiating influenced the outcome of Game 3, they know that there are areas the they could improve in that aren’t related to the whistle. Brad Stevens said, “I don’t complain about officials. We’ve got a lot of stuff we can do better. They have a hard job. We focus on us and the controllables. That’s the bottom line.” If the last two games are any indication, the refs will continue to reward aggression and the Celtics will have to figure out areas where they can apply pressure and be better.

Boston’s offense is predicated on every player being a threat to either shoot, dribble, or pass. With the Bucks packing in the paint, the Celtics have found it difficult to generate easy looks at the rim. After scoring 36 points in the paint on Tuesday, Boston only mustered 24 on Friday night and to make matters worse, their issues were compounded by turnovers turning into easy transition points.

Milwaukee is averaging 23 fast point breaks per game in the series so far and much of that is fueled by turnovers. In Game 3, the Celtics coughed up eighteen turnovers to the tune of 28 points off TO’s for the Bucks. That’s a staggering number for a team that ranked 4th in the NBA in opponents’ points of turnovers with just 14.7 per game.

Stevens said, “I thought we got a little deep on the drive, whereas in the first half, we were doing a really good job getting in the right depth and making the next right play. We turned it over a few times, they got going in transition, they get going downhill, we weren’t quite as tight as we like to be, loading up to the ball, making it tough to go downhill, and keeping them off the foul line. If there’s anything, it’s stuff we have to do better.”

When Stevens talks about “getting too deep,” he’s referring to players drawing double teams and allowing Milwaukee to smother him and get the ball out of their hands.

When Gordon Hayward drives into the paint, he’s either got to be shooting or kicking out as soon as he draws the second defender. If you watch the Bucks converge on drivers, they always attack low to prevent fouls.

They’re not necessarily looking to smother Kyrie here. They just want him to pick up his dribble.

The biggest deterrent so far against Antetokounmpo has obviously been Al Horford. Through 129 possessions, Al has held Giannis to 12-of-27 shooting and that’s included 4 pull up threes in garbage time. Aron Baynes served as Al’s backup in Game 1 and 2, but Giannis has feasted on him. He’s only shot 4-of-11, but Baynes has also committed six shooting fouls guarding Antetokounmpo.

For some context, Giannis has shot 70 free throws in his last four games. That includes 10 in Boston’s Game 1 victory in Milwaukee and 20 in the Bucks’ close out game against the Pistons. During the regular season, he averaged only 9.5 trips to the line.

In Game 3, instead of Baynes, Stevens elected to go small with Ojeleye. Semi got called for some ticky tack fouls, but for the most part, he served as a solid defender on the possible MVP. In last year’s seven game series, Ojeleye started the final three games and defended Antetokounmpo nearly as much Horford did to arguably better results. With quicker feet and a more solid base, Ojeleye was better at keeping Antetokounmpo in front of him. Horford had a deterrent factor of 107.0 against Antetokounmpo; that’s basically a percentage of a player’s field goal attempts in a specific matchup. In other words, Giannis was more aggressive against Al. Versus Semi, it was 91.0. Credit to the Ojeleye Factory.

The Bucks scored 52 points in the paint to the Celtics’ 24. “I’m living with that,” Irving said. Milwaukee averaged 53.3 PITP in the regular season and that’s just a concession Boston is willing to give up. “We can manage the game a lot better when we’re giving up 2’s rather than 3’s.”

The word out of Celtics camp on Saturday is that “all indications” point to Marcus Smart practicing today. There are metrics that show he’ll make a difference, but ultimately, he’ll add that extra punch that the team has been missing over the last two games. Stevens and Irving both stressed managing parts of the game that they could control. Leave it to Smart to be the wild card.

The team said all the right things after Friday’s disappointing loss. They didn’t cross the line when talking about the refs, they humbly admitted mistakes, and they spoke tactically about how they’ll change their approach in Game 4. That’s all well and good, but what the playoffs have lacked are those handful of winning plays that seem to turn the tide emotionally for the Celtics. So far, they’ve won on talent and execution.

Just over a year ago, Smart returned in Game 5 of last year’s series against Milwaukee. He had missed 19 games with a thumb injury. Here are the highlights:

Tell me this series doesn’t need a little of that.