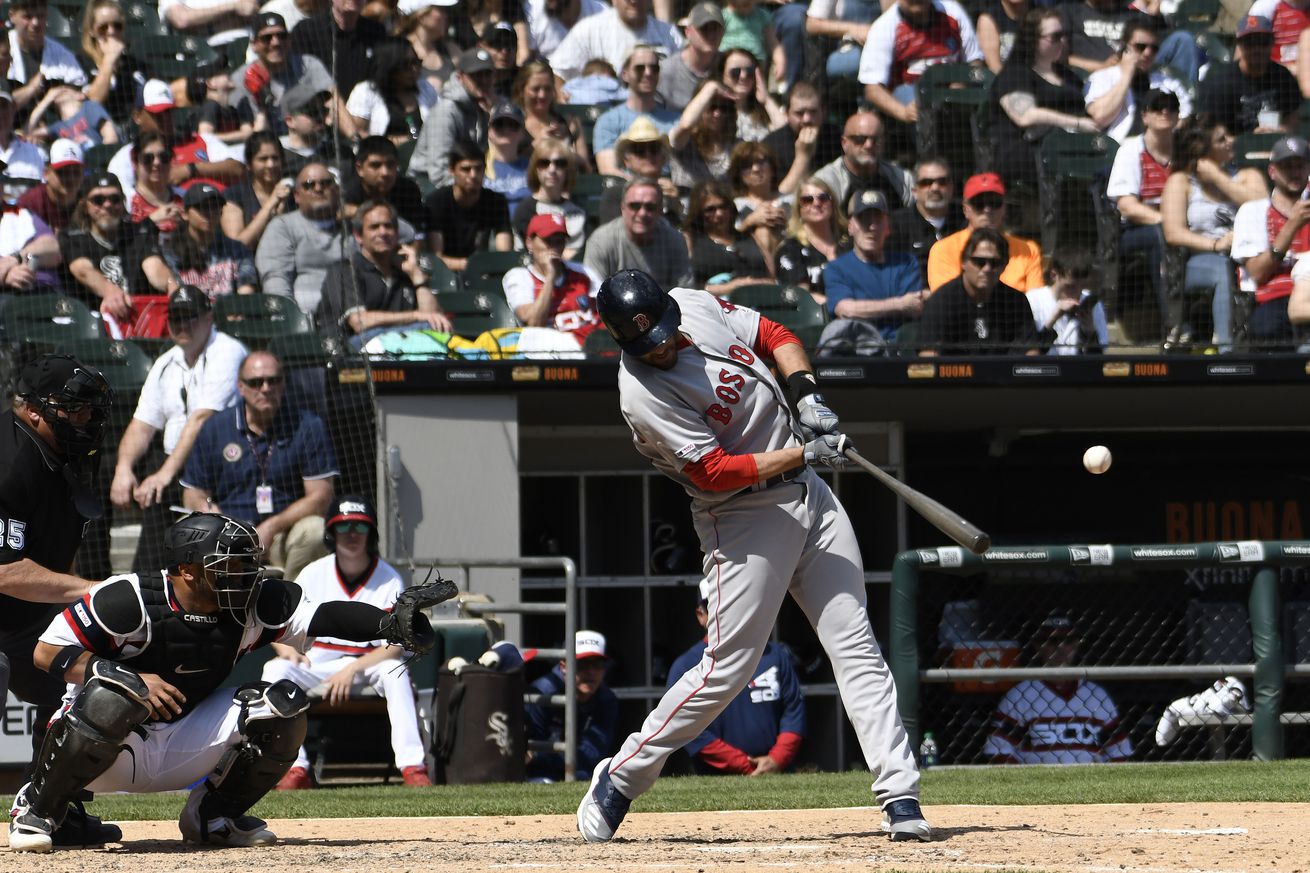 It wasn’t quite Saturday’s nine-run rally, but it was close.

On Saturday, the Red Sox exploded for nine runs, all with two outs, in the third inning to pave the way towards a blowout victory. It took a little longer for Sunday’s rally, but a seven-run inning allowed Boston to run away with another one, giving them their sixth win in seven games and pushing them to within just one win of a .500 record. Rick Porcello got the start in this game and he had his third consecutive strong outing. He did allow a couple of home runs in his final two innings, which at the time tied the game. All in all, though, it was a good day for the righty. Offensively, a couple of chances were missed early in the game and they only had two runs until the eighth inning rolled around. They then broke out for the aforementioned seven-run rally, and that was that. Good times were had by all.

There are times when a pitcher can put themselves in a tough position by pitching well. That is, they pitch so well and get in such a groove that there is nowhere to go but down, so they fall into that trap and fall down hard. There was some potential for Rick Porcello to fall into that trap with his start on Sunday, as he came in hot with two really good outings on a row before this including an absolute gem in his last one. Given what we saw from him early and what we’ve seen at various points at his career, the possibility for disappointment was at least present even if it wasn’t the expectation.

Early on, he looked like something approximating the guy we saw in his previous gem, though obviously not quite to the same extent. Still, Porcello was getting outs even if he was a little inefficent in the first couple of innings. Interestingly, he was doing it differently than that last start. There, he leaned heavily on a slow slider that perplexed Oakland’s hitters all night. In this game in Chicago, the righty started out with more changeups than usual and ultimately leaned heavily on both of his fastballs.

As I mentioned, there were some efficiency problems in the first couple of innings, and with over 40 pitches after two it wasn’t clear whether or not he was going to be able last more than five innings. Even with all of the pitches, though, Porcello wasn’t allowing any damage. He allowed just a single in each inning, though both runners got to second on stolen bases before being stranded in scoring position. He came back from there with a couple of much-needed quick frames, getting a 1-2-3 in the third. In the fourth he did issue a leadoff walk and José Abreu got to second on a balk, but once again the runner was stranded.

Meanwhile, the Red Sox offense was coming off an absurd performance on Saturday night that included a nine-run two-out rally with eleven consecutive baserunners and 15 runs overall. Clearly they weren’t going to repeat that, but they were looking for a similar approach of attacking to give their pitcher a big lead with which to work. They didn’t quite succeed, though they did get ahead early and led for the majority of the first half of this game.

After going down in order in the first, Boston got going in the second when Rafael Devers kicked things off with a double the other way out to left field. Michael Chavis moved him over to third on a fly ball that came up just short of being another home run, and then Mitch Moreland came up and put a single into center field to give the Red Sox a 1-0 lead. Unfortunately, they couldn’t keep the rally going as Steve Pearce, who got the start in the DH slot on Sunday with Mookie Betts off and J.D. Martinez in right field, ended the inning prematurely with a double play.

Boston would have another chance to extend their one-run lead in the fourth when Chavis drew a ten-pitch walk and then Moreland drew a walk of his own to possibly start another two-out rally for the Red Sox. Instead, Pearce failed to come through again as he grounded out to the shortstop to once again end the inning. Fortunately, they would extend the lead in the fifth with a rally started by a Jackie Bradley Jr. base hit. Sandy León moved him over to second on a sacrifice bunt, and eventually Martinez came up with two on and two outs. The slugger poked a line drive into right field for a base hit, and Boston had themselves a 2-0 lead.

That brings us back to Porcello, who did make it into the fifth and was starting to cruise. That cruising wouldn’t last much longer, though. After starting the inning with a strikeout and a ground out, the righty only had to get Ryan Cordell to finish off the perfect inning. Instead, when he tried to start off with a fastball on the outside corner the two-seamer came back out over the plate and Cordell crushed it out to straightaway center field. Just like that, the lead was halved.

Then, after Boston went down with three straight strikeouts in the top half of the sixth, Abreu did some damage in the bottom half. This time, Porcello threw a 2-2 changeup that stayed right down the heart of the zone and the White Sox slugger….well, he slugged it. The ball carried way out to left-center field to tie this game up at two runs apiece. Porcello did get out of the inning from there, which ended his night. In the end, the righty allowed the two runs over six innings on five hits with seven strikeouts and no free passes.

So, now it was a battle of the bullpens with a tie game heading into the seventh. Jace Fry was coming on for Chicago in the seventh, and Boston got another chance going. The southpaw lost the strike zone a bit issuing back-to-back one-out walks to León and Benintendi, providing a big shot for Xander Bogaerts. Instead, the shortstop grounded into a 4-6-3 double play to squander the chance. Brandon Workman had the seventh and after a leadoff walk he got three quick outs to keep the game tied.

The Red Sox then got themselves another chance in the eighth, this time thanks largely to absurd defense from the White Sox. Devers hit a one-out fly ball out to deep left field that was played nicely off the wall by Delmonico. It should have been a simple single, but Devers took a wide turn that enticed Tim Anderson to try and nab him at first base. His throw got away, allowing Devers to try for second base. Abreu then tried to get the runner there, but then his throw also got away. The dust settled with Devers out of breath and standing at third. Chavis drew a walk after that before Moreland gave the Sox their lead back with his second RBI single of the day, and second time knocking in Devers. Eventually the bases would load up and Eduardo Núñez came up to pinch hit for León. It was a strange move with Mookie Betts available on the bench, but it worked as Núñez hit a slow roller down the third base line that somehow stayed fair. That gave the Red Sox a two-run lead, and they’d extend it to three on a bases loaded walk from Andrew Benintendi. Then, the game was broken open by a Bogaerts grand slam. With that one swing of the bat, it was suddenly a seven-run lead.

From there, it was just about avoiding disaster. Marcus Walden did that with a scoreless eighth. The ninth belonged to Colten Brewer, who tossed a somewhat difficult scoreless inning of his own and that was that. Baseball is back to being good.

Now, the Red Sox head back to the East Coast for a three-game set in Baltimore starting on Monday. As of this writing they haven’t officially announced the starter for that one, though the assumption is that it will be Hector Velázquez since he wasn’t used in this game. The Orioles will counter with Andrew Cashner. First pitch is scheduled for 7:05 PM ET.

Over The Monster https://www.overthemonster.com/2019/5/5/18530380/red-sox-white-sox-rick-porcello-xander-bogaerts-rafael-devers
Categories: Sports