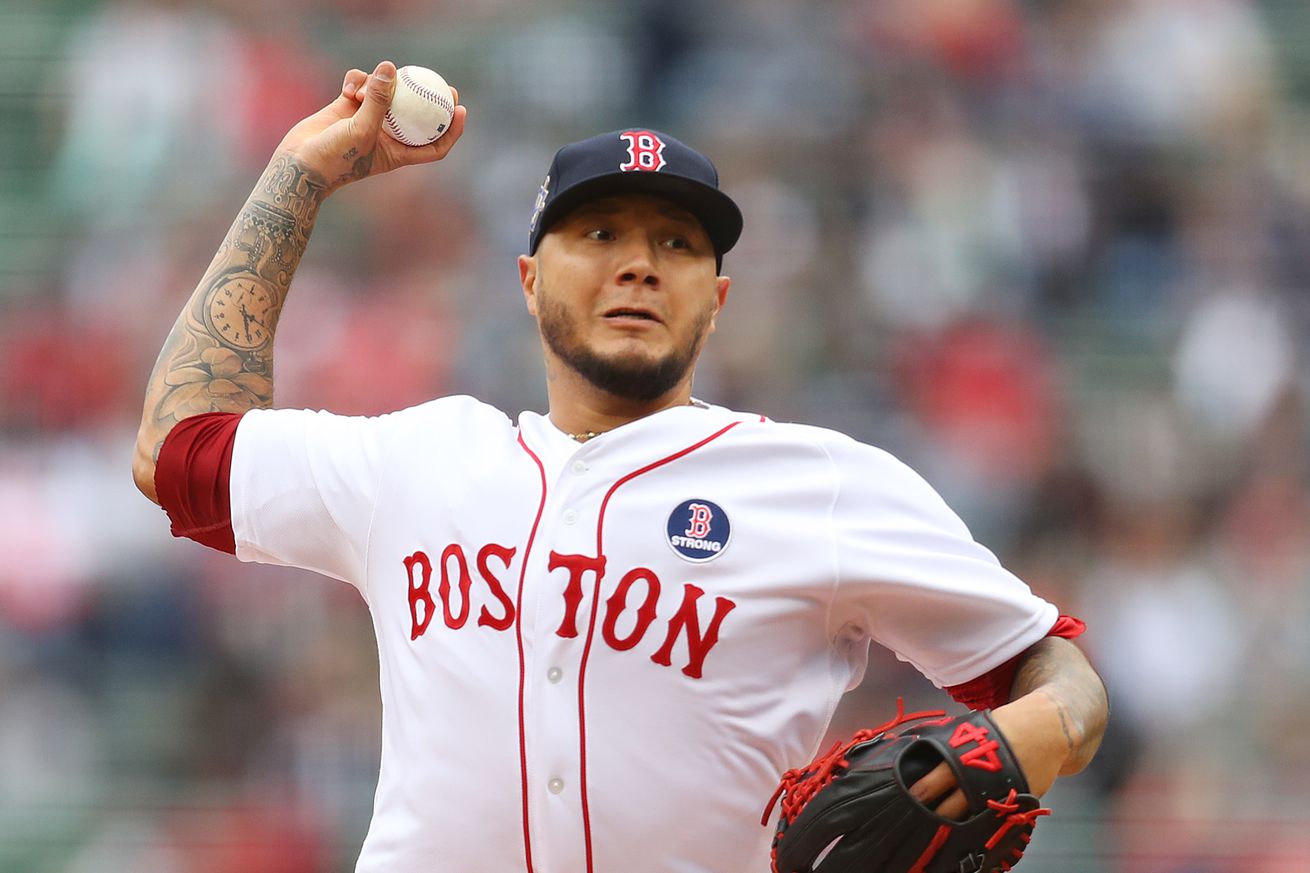 He does everything and he does it well when it doesn’t look like he should.

In my relatively short time watching the Red Sox I’ve been fortunate enough to see amazing pitching seasons from guys like Pedro Martinez, Curt Schilling, Josh Beckett, Jon Lester, Clay Buchholz and Chris Sale, among others. With all of the big names to suit up for the hometown team, my favorite pitching season of all time was the 2011 Alfredo Aceves season. I understand, given the history of this site and Alfredo Aceves, that this could sound ironic or like a joke, but I promise this is 100 percent sincere. Aceves that season bounced around between just about every role and was fantastic in all of them. He started games, he closed games, he pitched in a setup role, he handled long relief. Through it all, he finished with a 2.61 ERA over 114 innings. It was the type of quiet value we probably won’t see again, at least not any time soon.

There is no Aceves this year, but thinking about that year is a nice reminder of just how valuable versatility on the mound can be. I’ve talked about this before, but that is an underrated quality with versatility almost exclusively being discussed with respect to position players. We saw versatility on the mound in action last year with both Brian Johnson and Hector Velázquez providing value on the mound in 2018. This year, the former is hurt and hasn’t provided much in 2019, but the latter is doing what he always does. That is to say he is pitching in whatever role the team is asking him to pitch in, and generally speaking he is doing it well.

There’s a very easy trap to fall into when discussing Velázquez, and it’s one that I’ve fallen into many times. That is to focus on what he doesn’t do well and why things are surely about to take a downward turn for the righty. Mostly, it has to do with stuff, as he doesn’t have the big stuff that is generally required to succeed in today’s MLB. His fastballs sit in the low-90s at their best, he relies on splitters in an era where he don’t see that very often and his career swinging strike rate is less than 20 percent. That is a major reason his peripherals have always suggested he was not all that good.

Ultimately, though, we are now in the third year of his major-league career, and he’s turned those peripherals on their head in every season. All Velázquez has done in his time with the Red Sox is prevent runs, which at the end of the day is the man’s job. In his three years he has ERA’s of 2.92, 3.18 and 3.72. For his career, he has an ERA+ of 139, meaning he is 39 percent better than the league-average pitcher over his career by ERA. Granted, we know ERA is not the best way to evaluate pitchers, particularly in smaller samples, but over 129 career innings he has prevented the runs. It’s something to appreciate even if you aren’t a believer in it carrying forward.

This year has also been different in years past, too, with his peripherals looking better than ever. He’s striking out more batters than ever, missing bats at a right higher than 20 percent for the first time in his career while also striking out just under a batter per inning. That has come with some uncharacteristic walk problems, but he does have a 3.56 FIP and a 4.50 DRA. Of course, this is all over 19 1⁄3 innings, so it can be taken with a grain of salt. The big difference in his approach this year is to move more all-in on the splitter, which again is not a super common pitch in today’s game. That can throw batters off, and it’s working right now.

The results aren’t really what I’m impressed by, though. Velázquez is doing the job and that’s great, but the times he is doing it is what I will remember from him this year. He started the year without being guaranteed a roster spot. In fact, I argued before the year he should not get the spot. Him being there was important, though, since the rotation struggled to such a great extent early in the year. They needed innings from the bullpen, and he was the guy to give them. When Nathan Eovaldi went down with his injury, he has been taking the ball every five games in the rotation, too. On the year, he’s made four starts to go with six relief appearances. Even beyond the nearly perfect split, it’s not that he’s just converted to the rotation for now. He’s only going about three innings per start, which is not ideal, but it would be more frustrating if that’s all he was doing. However, he’s also been good for a relief appearance between starts. With the team showing early they don’t possess a ton of pitching depth in the high minors, being able to use Velázquez like this and save other relievers for a day is something that could pay dividends as the year goes on.

Like I said, it’s easier to focus on what Velázquez does not do and to wonder when it’s all going to go wrong. I’m sure if he allows a couple runs in the first inning or two in his start on Tuesday I’ll start going down that road again. I’m still not sure how much we can trust his performance moving forward. What I am sure of is that we cannot erase what he’s done in his career and this season specifically. Early on, the Red Sox have needed a little bit of everything from him. Most pitchers would not be able to bounce between roles like that, particularly within the same week time after time. Velázquez has been doing it this year and over the last three years, and it can be all too easy to miss the value of that kind of pitcher.

Over The Monster https://www.overthemonster.com/2019/5/7/18535089/hector-velazquez-red-sox-rotation-bullpen-depth-chart
Categories: Sports