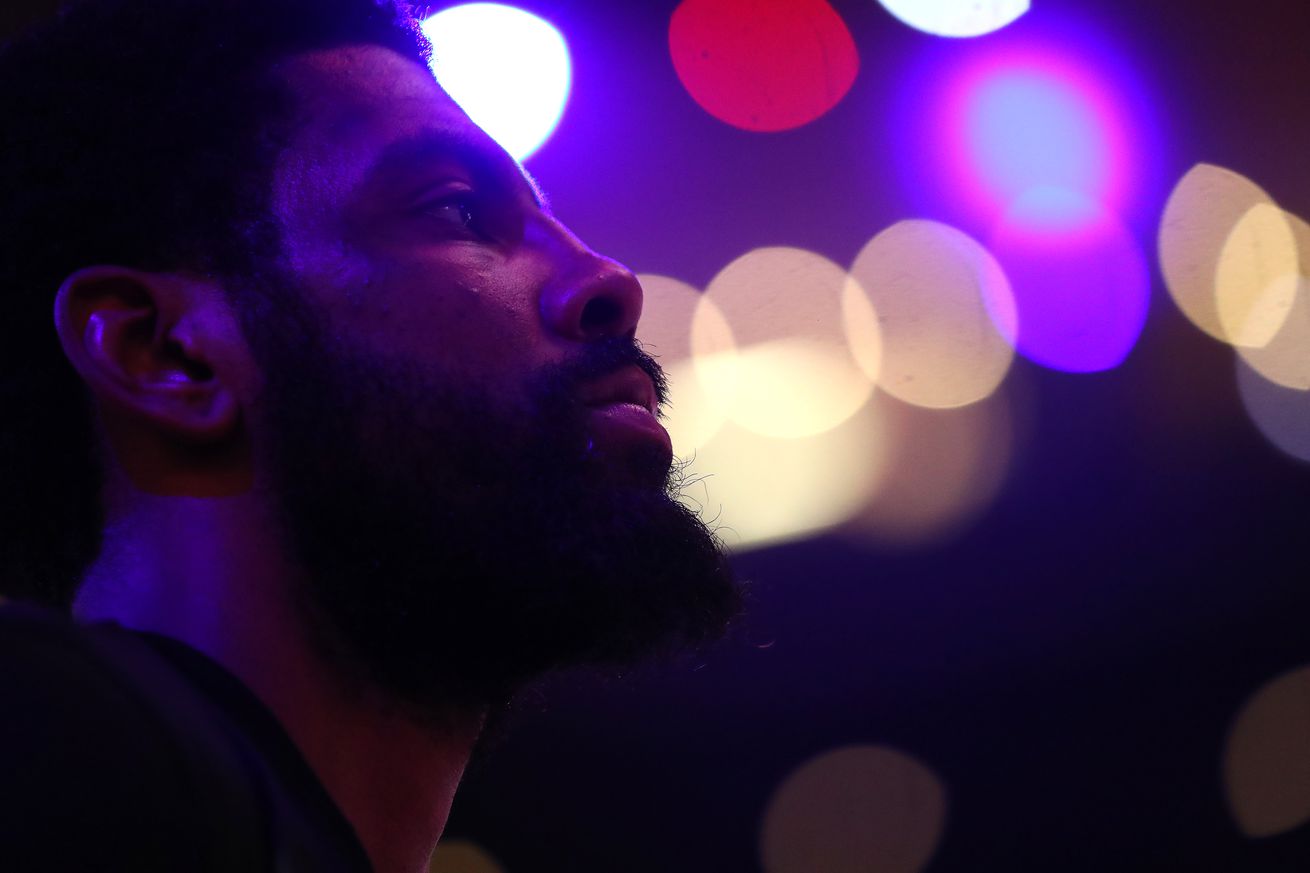 In what could be his final home game in the Garden, Kyrie Irving was as defiant as ever. Earlier in the regular season, he waged war against the press for its inaccurate portrayal of his comments. He called out social media and aggregators for poisoning the Celtics’ locker room. And now, with his team down 3-1 to the Bucks and heading to a must-win Game 5 in Milwaukee, Irving remains as focused and steadfast as he did in the preseason. When asked about his confidence moving forward, he flatly said, “it’s unwavering.”

Kyrie’s Kritics™ will pounce on his post game comments and see it as another in a long string of petulant pressers after a loss. For Irving, his biggest downfall might be his honesty. When he’s upset about something important, he’s not afraid to voice his opinion. After Game 3, he spoke openly about the officiating. After Game 4, not unlike his former teammate LeBron James, he uploaded his memory of the loss and discussed in detail like a court stenographer his struggles over the last three games.

“I missed shots. Shots just didn’t go in. You go out and prepare. Like I said: sometimes they go in, sometimes they aren’t,” Irving said. “They do a great job at loading, too. Making the paint look like crowded whenever I’m driving or wherever I’m going on the court, seeing two or three bodies, sometimes four. I’m still kicking out, trying to make the right plays, just continue to do so. Now, it’s time to get ready for Game 5.

For much of the year, the Celtics have gone where Irving has taken them. His stabs at leadership have been hit or miss and too often, the team can take on the personality of its star. In Game 5, Irving hit just 7 of 22 shots, capping off a three-game stretch of 19-for-62 shooting. When asked about his struggles, Irving bristled at the idea that he was in a slump.

“Who cares? I’m a basketball player. I prepare the right way. Like I said, it’s a little different when your rhythm is challenged every play down. You’re being picked up full court. They’re doing things to test you. The expectations on me are going to be sky high.

I try to utilize their aggression against them and still put my teammates in great positions while still being aggressive. I’m trying to do it all. For me, the 22 shots, I should have shot 30. I’m that great of a shooter. To me, the consistency of just going at it, staying aggressive is always going to put us in a great position.”

That may sound like a tone deaf response steeped in hubris and bravado, but it’s a point not lost on his teammates. “At times, their defense loads up on our best players. We gotta take some of that off Ky and other guys have gotta step up and make plays with the ball in their hands also,” Marcus Morris said. Milwaukee’s defensive strategy has certainly frustrated Irving and the Celtics, but Kyrie is still the best player on the team to crack it.

With the Bucks packing in the paint on every half court possession, Boston has stressed attacking it and trying to capitalize on the second side defense after the swing. Irving’s job primarily has been to be that initial penetrator and relying on his teammates to make the next correct read.

In that tortuous third quarter when Milwaukee turned a 2-point halftime lead into 12 with Giannis Antetokounmpo and Khris Middleton on the bench, Irving played all twelve minutes and was doing his job. He missed both of his field goal attempts, but went to the line six times and dished out four assists to one turnover. Unfortunately, the rest of the team didn’t respond and their inability to hit shots affected their defense.

“When the ball doesn’t go in the rim, the energy of the basketball can transfer to the other end as well. That’s just Basketball 101,” Irving said. “That’s a choice we all have to make: being more communicative. It’s a natural thing as an individual when your shot’s not going in to be thinking about that shot as you go down in the defensive position. It can take you out mentally while the other team is running especially in the playoffs where the possessions are magnified unbelievably.

It’s been a consistent thing for us where we haven’t made shots and the defensive end of the floor has taken lapses. But it just can’t happen going forward. We have no choice. It’s do-or-die.”

So here we are. “Do-or-die.” When asked why he left the court with nine seconds still left in Game 4, Irving said, “the game was over.” For the fan base that has already turned their back on the 27-year-old, that response may be a little immature and the last straw of a very long and disappointing season. However, the season isn’t over. Irving may still have that signature performance that will win back the faithful and maybe even the series.