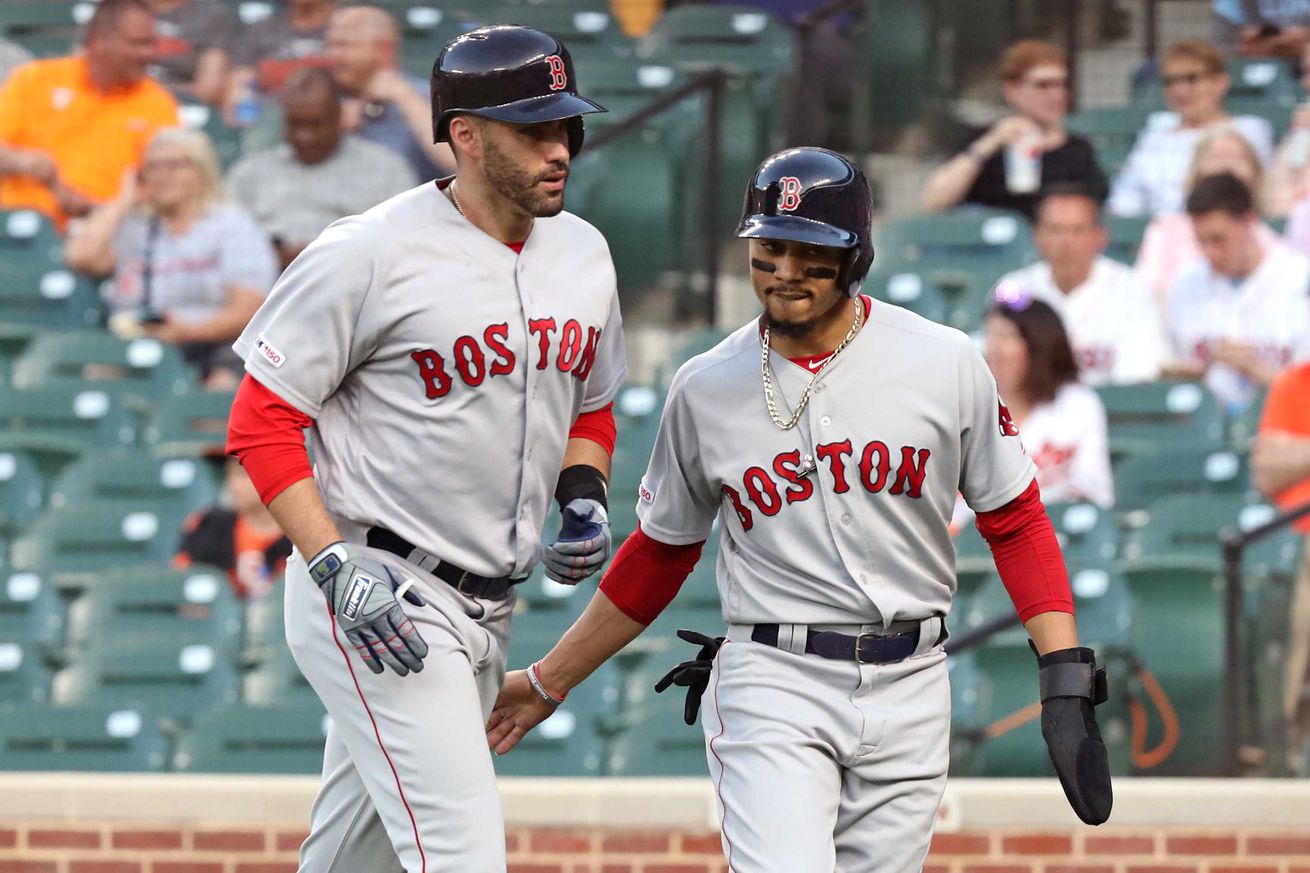 Despite more shaky late-inning pitching, the Sox still squeaked out the win.

Tuesday was the warmest game the Red Sox have participated in so far in 2019, and you know what they say about warm weather. The ball flies! That was certainly the case in this one, particularly early as the Boston and Baltimore traded jabs and blasts to keep this one going back and forth. J.D. Martinez hit his 200th homer of his career to start the scoring for Boston before Xander Bogaerts and Mitch Moreland joined him in the home run derby. Baltimore tied the game immediately after the first two homers, but Moreland’s three-run home run would be the deciding blast. Ryan Brasier did nearly blow the lead in the eighth as he shrunk a three-run lead into an advantage of just one run, but Matt Barnes came in and closed the door and got the Sox back to within one game of .500.

I often find myself thinking things like “you know, it really would be good for the Red Sox to get off to a hot start tonight,” after which I think about how dumb I am. Granted, I think that last part a lot for a variety of reasons, but that’s besides the point. In this case, you know, when isn’t that a good idea? I was thinking that again today, though, because it just felt necessary after Monday’s game. The top of the lineup was entirely nonexistent in that game, with the top five guys going a combined 0-19 with nary a walk. Getting off that schneid as quickly as possible felt imperative, if for no other reason than for the people like me to not lose our damn minds in frustration.

Fortunately, the Red Sox had our bats and wasted just about no time putting Monday’s game in the rearview. Going up against David Hess this time around, they got a quick first out but then moved a bit. Mookie Betts drew a walk in the second at bat in the game, and that brought J.D. Martinez to the plate. It had been a little while since the slugger had left the yard, and surely you know what happened next since I’m bringing up that little homer-less slump. Hess threw Martinez a fastball down and in that the latter was clearly sitting on, and it was launched out over the wall in left-center field. It was the 200th homer of Martinez’ career and it gave Boston an early 2-0 lead.

Unfortunately, it was a kind of back-and-forth affair with the ball flying in what was the warmest game the Red Sox have played in to date this year. Hector Velázquez got the start for Boston, and since I said some nice things about him this morning it was a given that he would not be perfect in this one. The righty got the first two batters of the inning out, but then Dwight Smith Jr. hit a line drive single to extend the inning. That was important because Rio Ruiz got a fastball middle-in. Even with his velocity up a bit this year Velázquez doesn’t have the stuff to sneak that by, and the Orioles third baseman blasted a two-run homer to right-center field. Just like that, the game was all tied up after one.

Both teams would go down without plating a run in each of the next two innings, with Boston leaving a runner on in each while Baltimore left two on in the second, but the scoring would return in the fourth. There, it started right away with Xander Bogaerts doing the option this time around. Hess threw the Red Sox shortstop a fastball middle-in, right in the sweet spot for any hitter, and Bogaerts hit his seventh homer of the year out to straightaway center field. The Red Sox had their lead back. It seemed like they’d add even more, too, when Rafael Devers and Michael Chavis each reached immediately folliwng the homer. Jackie Bradley Jr. would move them each up a base on a bunt, but Christian Vázquez and Andrew Benintendi failed to knock them in, and Boston had to settle for a 3-2 lead.

Sure enough, wouldn’t you know it but leaving those runners in scoring position would prove costly, and quickly. Marcus Walden came on in relief to start the fourth, as was expected. The righty did get two outs to start the inning including a leadoff strikeout, but then Hanser Alberto stepped up. He’s not a big power hitter, but Walden threw a two-seam (or a cutter, it wasn’t clear) that didn’t move at all, and anyone will crush that. Alberto hit a solo home run, and once again we were all tied up.

Fortunately, we didn’t have to wait too long this time for Boston to take the lead back, and even better it wasn’t just a small step forward. Betts started off this inning with a solid single and then moved up to second on a wild pitch. Martinez followed that up with a walk to put the first two batters on in front of Mitch Moreland. Moreland, as we know by now, hates singles and instead decided to do a little more by putting a middle-middle fastball over the left-field wall for an opposite field home run, and the Red Sox had a three-run cushion.

For the first time on the night, their lead actually lasted through the next half-inning, too, which was a nice change of pace. Walden got a 1-2-3 fifth before coming back out and doing the same in the sixth with some help from his defense in the form of diving catches from both Betts and Bradley. The homer to Alberto wasn’t great, but overall Walden came through yet again for a big, multi-inning relief appearance.

After Walden was removed, Brandon Workman was next in line for the seventh and he came through with a 1-2-3 inning. The eighth belonged to Ryan Brasier, which was interesting considering the top of Baltimore’s lineup was coming up. That is generally a spot reserved for Matt Barnes. Brasier struggled a bit, getting the first out before allowing a bloop single that was followed by a double ripped down the first base line. It ricocheted off the first base bag, and that gave a little extra time for Trey Mancini to come around and score. That cut Boston’s lead to two. Brasier then gave up another single to allow another run, and Alex Cora had seen enough.

So, Barnes would come in for the eighth after all, except it came with a one-run lead and the tying run on first base with two outs. His control was spotty, but he struck out the first guy he faced to end the inning with the lead still in hand.

The offense would help out a bit in the ninth by loading the bases right away and eventually scoring two more to extend that lead back out to three. Barnes came back on to try and finish it out. He did so facing just three batters in the ninth thanks to a nifty double play started by Xander Bogaerts. Red Sox win.

The Red Sox will look to take their third straight series and even up their record with a win on Wednesday in the series finale in Baltimore. Chris Sale will be on the mound for Boston while Baltimore counters with Andrew Cashner. First pitch is scheduled for 7:05 PM ET.

Over The Monster https://www.overthemonster.com/2019/5/7/18536230/red-sox-orioles-mitch-moreland-jd-martinez-200th-homer-xander-bogaerts-ryan-brasier
Categories: Sports