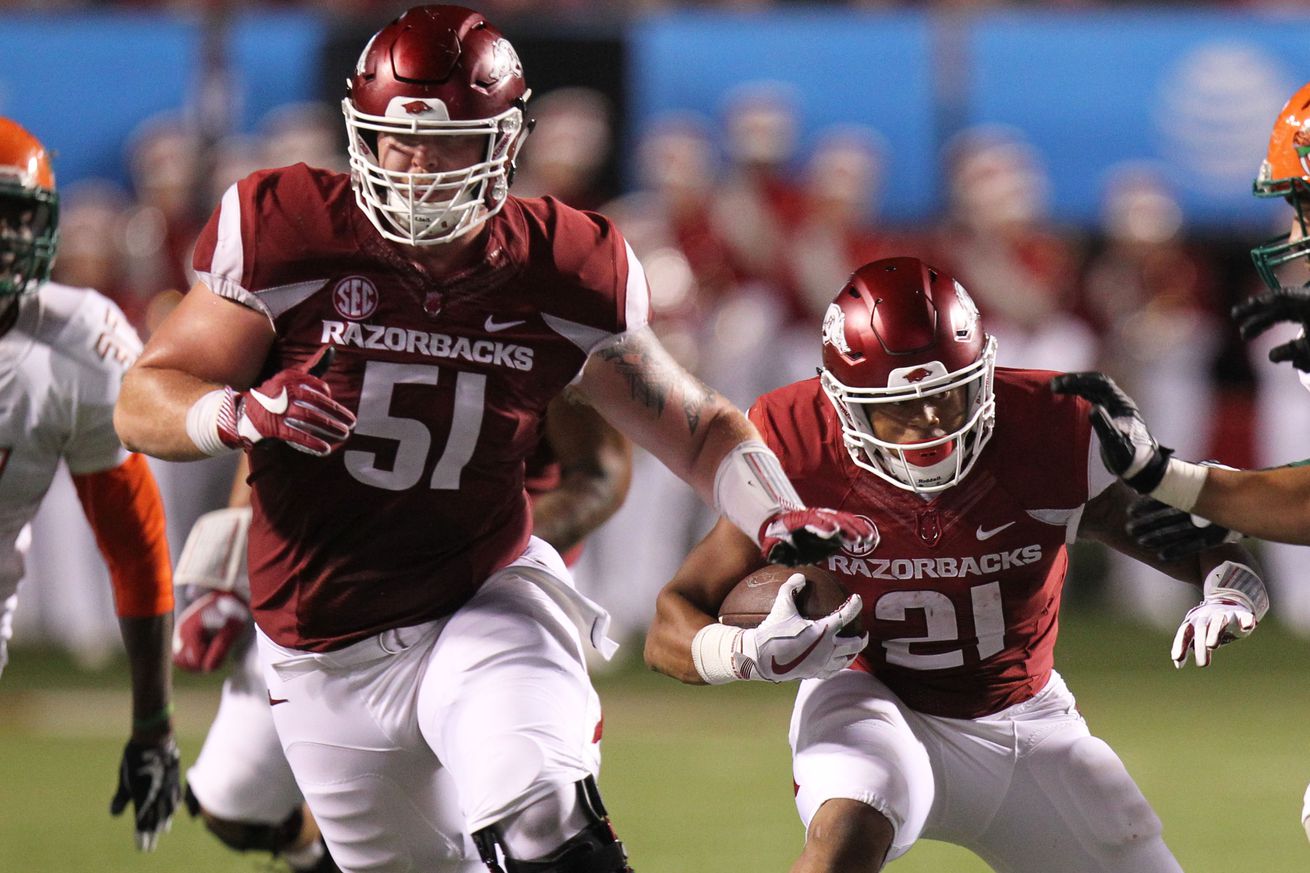 Breaking down the offensive lineman’s game against one of college football’s powerhouses.

One of the differences between good NFL franchises and great NFL franchises is that the great organizations are always thinking about future needs. Teams that draft with a plan beyond immediate needs give themselves potential paths towards addressing future roster holes. The New England Patriots are, as we have seen over the past two decades, a great organization. Take, for example, their approach to the offensive tackle position this offseason. With Trent Brown on his way to the Oakland Raiders and LaAdrian Waddle moving to the Buffalo Bills, the Patriots drafted Yodny Cajuste in the third round, signed Jared Veldheer, and of course return Isaiah Wynn, one of their two first round selections a year ago. Multiple ways to approach a position of need.

Their mindset was again on display this past draft when they selected interior offensive lineman Hjalte Froholdt from the University of Arkansas.

Right now, the Patriots have one of the league’s best trio of interior offensive lineman, with center David Andrews, right guard Shaq Mason and left guard Joe Thuney. However, that might not be the case past the 2019 season. While Mason is under contract through the 2023 season and Andrews is under contract through 2020, Thuney is set to hit the market as an unrestricted free agent at the end of the 2019 campaign. While some other guards will also hit the market, such as Clint Boling and Brandon Scherff, odds are Thuney will command a contract well above his current deal, with an average annual value of just above $800K.

While the Patriots may look to re-sign Thuney, should an agreement fail to materialize the organization might have a big hole to fill at the left guard spot. With the selection of Froholdt, they have given themselves one potential option.

The Danish-born interior offensive lineman was not considered one of the top-flight guards in the 2019 draft class, but similar to the film study piece on Jarrett Stidham, watching Froholdt against top competition is a window into how the Patriots likely view the prospect. Specifically, his game against Alabama from this past season. For most of that contest, the new Patriot was matched up against Quinnen Williams, the third overall selection in the draft. Pick number 118 had a pretty good run of things. Here are some of the traits that stood out watching Froholdt in this contest.

Watching Froholdt in this contest, you can see an intelligent offensive lineman with a very good understanding of protections, twists, and how to handle games up front from the defensive line. Take this first example. Alabama leaves Froholdt (#51) uncovered at the snap, with Williams (#92) head up on the center, a defender head up on the left tackle and an outside linebacker showing pressure as well:

The OLB comes after the quarterback, and in addition the Crimson Tide use a nose/tackle or “NUT” stunt, with the tackle looping to the inside and Williams coming behind him, attacking between the tackle and the guard:

Froholdt, however, does a great job of scanning and identifying the stunt, and then anchoring against Williams and preventing the Outland Trophy winner from generating pressure:

Here is another example of Froholdt identifying a twist and handling his business. On this example, the defense uses a tackle/end or “TEX” stunt:

This time the defensive tackle starts upfield, and the outside linebacker loops to the inside. The defense is trying to get Froholdt to commit to the tackle, so the OLB can behind him into a vacated spot and attack the pocket. Froholdt, however, is not fooled:

He tracks the OLB as he cuts inside and stops him in his tracks, driving him into the center where he gets some help. For good measure, Froholdt then peels off and finds some work, walling off the DT as he tries to work back inside towards the QB.

The Razorbacks got into the end zone on a red zone passing play, and Froholdt was a big reason why. On this snap you can see the incoming Patriot point out some defensive alignments pre-snap (you can see him doing this on a number of plays) and he handles another TEX stunt. His work here gives his quarterback time to identify the route in the back of the end zone:

Williams was held in this game to just four assisted tackles, one tackle for a loss and a half a sack. The lone TFL came when Froholdt was sitting out a series, and the half sack came on this interior stunt:

As you can see, Froholdt identifies the twist and slides over to take the nose tackle, expecting the center to peel off and handle the looping defender. But when that does not happen, Froholdt tries at the end to scrape off the nose tackle (occupied by the center) and handle the defensive tackle. But he cannot get there in time (and Williams gets past the center) and it leads to a turnover.

Reading pre-draft reports on Froholdt would leave you with the impression that his athleticism and footwork are among his strengths as an offensive lineman, and the tape from his game against Alabama matches that assessment. The Razorbacks were not afraid to use him as a pulling guard on their pin/pull designs, and his execution on those plays as a lead blocker sprung a few big runs for Arkansas.

On this snap, the Razorbacks run a pin and pull play to the left edge out of the pistol formation. Both the tight end and the left tackle block down (the “pin”) which enables Froholdt and the center to pull to the edge:

Froholdt gets to the edge and is responsible for strong safety Xavier McKinney (#15). He kinda throws him out of the club:

You see the footwork and the path he takes to the point of contact, and both are spot on.

Here is the same design from the Razorbacks from later in the game. This time Froholdt is responsible for cornerback Patrick Surtain Jr. (#2). When a pulling guard gets the chance to take on a CB in space, they need to deliver, and Froholdt does deliver….Surtain to the Arkansas bench:

In terms of lateral quickness and footwork, this outside zone play is a great example of what Froholdt brings to the table. The Razorbacks run outside zone to the right side on this play, and as you can see Williams is aligned to the inside of Froholdt presnap:

This tasks Froholdt with making a difficult “reach” block, where he will need to somehow get across Williams’s face and seal him off on the backside. With some quick feet at the start of the play, Froholdt is able to do his job:

Froholdt’s first two steps here are perfect. He widens at the start with his right foot, getting himself into position to cross Williams’s face. Then his left foot gets himself to a good angle of attack, and he makes this step right in time with his initial push and contact. Impressive quickness and execution enables him to seal off the defender on the backside of this stretch zone play.

While this was one of the weaknesses identified in many pre-draft reports on Froholdt, the Alabama game does have some examples of the guard winning at the point of attack thanks to upper body power. On this play, for example, the Razorbacks run QB power right behind Froholdt – and right at Williams – and while Froholdt has the alignment advantage presnap he is able to finish the play with his upper body:

Once Froholdt anchors here, he uses his arms and chest to twist Williams back and away from the hole, creating just enough of a crease for his QB. In addition, he keeps his hands inside the frame once engaged, avoiding the holding penalty.

Similarly, on this counter play Williams again has inside leverage against Froholdt pre-snap:

Froholdt uses that to his advantage, dropping the anchor and then relying on his upper body to maintain control of Williams at the point of attack. Between his block and the effort from the puller, the Razorback offensive line creates the crease for the RB:

While the new Patriot had the leverage advantage on both of these plays before the snap, he was able to anchor and then control Williams through the whistle thanks to his upper body strength.

Few incoming rookies are perfect, and Froholdt is no exception. There will be areas of his game that he needs to clean up, such as hand usage, blocking angles to the second level, and protecting his outside edge at times, but that is the beauty of New England’s approach. Given the proficiency of the Patriots’ current interior offensive line, odds are that Froholdt will get a year of development under Dante Scarnecchia before he is truly counted upon as a critical component of the offensive line. Then, should Thuney leave for greener pastures at the end of the 2019 campaign, they will have some options available to them. If, after a year of developing him, the organization feels Froholdt can step into that spot, they already have the replacement on the roster. If not, they can again look to a combination of the free agency market and the 2020 draft to find a replacement. By drafting Froholdt now and getting him in the system, they give themselves a number of options down the road.

As smart teams do.

Whether Froholdt ultimately steps into that role remains to be seen. But judging by his tape against Alabama – and elite competition – there are some solid building blocks in place for Scarnecchia to work with.