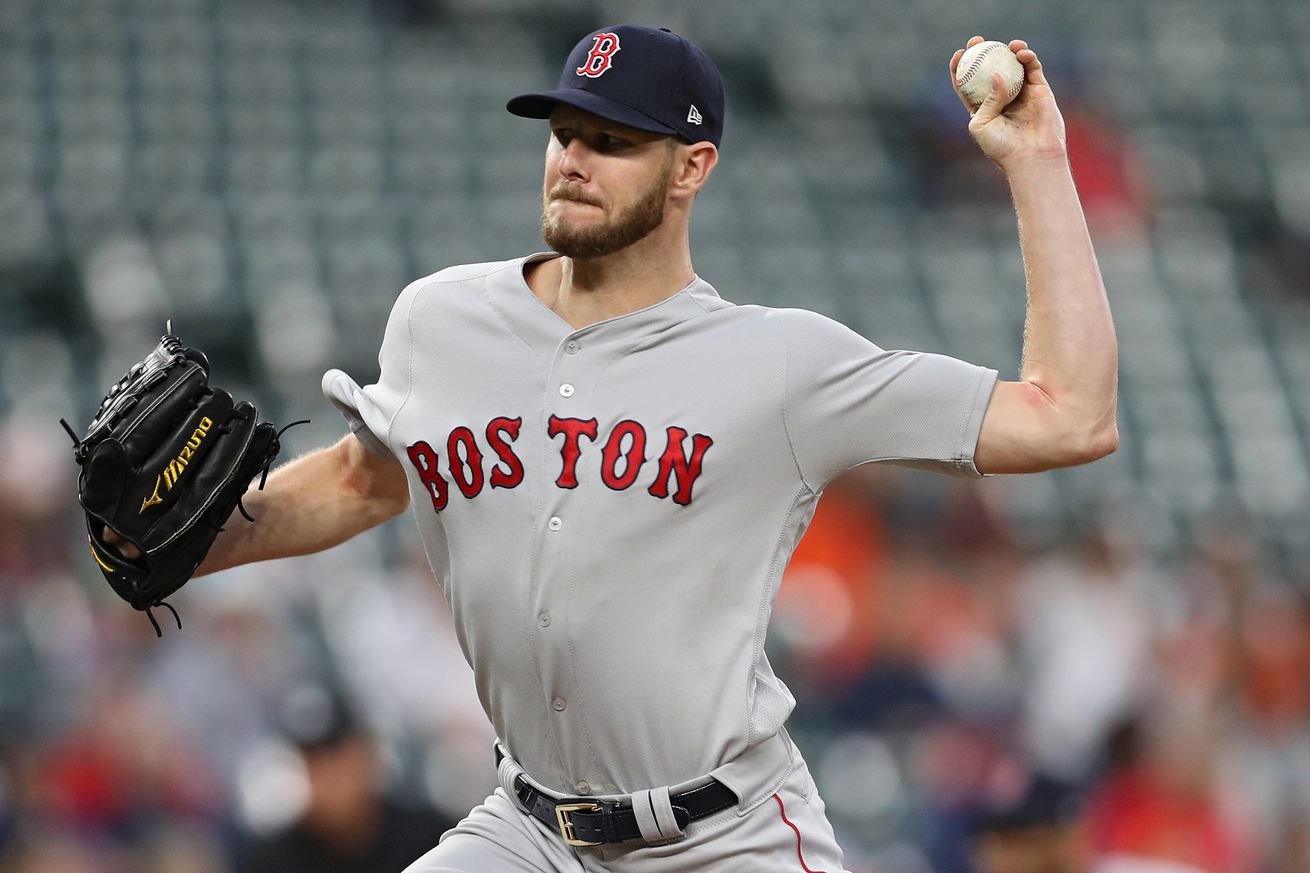 So that was a baseball game that happened. The game lasted a while after he left, but the story of this Wednesday night was certainly Chris Sale. The Red Sox ace certainly looks to be “back,” having just come through with his best performance of the year. He had a no-hitter through 5 2⁄3 innings. He struck out 14 batters. He didn’t walk a single Orioles. He lasted eight innings. Oh, and he mixed an immaculate inning in there. It was pretty good! Unfortunately, he also didn’t get much of anything in the way of run support from his offense. Boston’s hitters managed just one run in the first nine innings of the game despite Andrew Cashner looking fine but not great. Fortunately, the bullpen picked up right where Sale left off and kept the game tied — with a hat tip to Jackie Bradley Jr. in the field — at one long enough for Andrew Benintendi to re-take the lead with a solo homer in the twelfth. It was long and it was frustrating at times. But it was a win, and it’s a .500 record.

I think Chris Sale might be back, you guys. The Red Sox ace was obviously a mess at the start of the year, pitching worse than any point since, well, at least since before people started watching him en masse. In his outing prior to this one, he looked much better than he had at any other point this year, putting together solid stuff with solid command to take advantage of a White Sox lineup. He didn’t get super deep into the outing, making it through just six innings, but he didn’t allow a run and struck out ten innings. It was as close to vintage Sale as we’ve seen in 2019. The only question to me was whether or not it was a matter of him just getting hyped up to play in his old field against his old team.

He answered that question emphatically on Wednesday night. With the Red Sox having had essentially two straight bullpen games in the first two nights of this series, they were really looking for a long outing. Granted, strong long relief performances from Ryan Weber and Marcus Walden made the bullpen more available than they could have been, but length was still preferred as it always is. Sale gave the Red Sox that and was dominant.

He started out with his velocity on the lower end, getting to 90-91 right off the bat. He made it clear within the first inning that he was just building up, though. By the end of that first frame the southpaw was up to 93, and he eventually got rolling to the point where he was getting to that 95-96 range when he needed to. That velocity was great, but to me the slider was the most impressive pitch. He mixed speeds on the offering a bit and showed the best command I’ve seen from the breaking ball all year to this point. His showing on the outside corner to righties, specifically the slower one, was particularly impressive.

As for how it went, well, it was pretty simple. He threw eleven pitches in the first and ten pitches in the second for a pair of perfect innings. The first baserunner of the night for Baltimore came in the third when Sale just barely grazed Stevie Wilkerson’s leg with a back-foot slider. That was the leadoff man in the inning, but all Sale did after that was strike out the next three batters that came to the plate. He’d hit the leadoff man again in the fourth, who eventually got to second on a stolen base, but again retired the next three batters with two strikeouts this time around. After a 1-2-3 fifth — with two more strikeouts — he was through five innings without having allowed a hit.

Unfortunately, the Red Sox offense was not able to back up their ace despite going up against a guy in Andrew Cashner who, frankly, is a very hittable arm. As always, the opposing pitcher deserves credit here and Cashner spent a good portion of the night on the edges of the zone. That being said, the Red Sox should have — and have to — do better than this. They got some mistakes and they had some chances in this game, but they failed to come through with good, productive swings in those situations. It happens all too often with Sale on the mound, for whatever reason.

They had a chance right off the bat, too, and it was gifted to them by Baltimore. Andrew Benintendi hit a fly ball down the left field line that Dwight Smith Jr. got to but let bounce out of his glove. The error allowed Benintendi to get to second as the leadoff man, and he’d move to third in the next at bat on a deep flyout from Mookie Betts. Neither J.D. Martinez nor Mitch Moreland could come through, however, and the Red Sox squandered the chance.

After they managed just a single in the second, Boston finally took advantage of a mistake in the third. Or, more accurately, Mookie Betts took advantage of a mistake. Cashner threw a changeup to Betts that totally missed its intended location. It was right down the heart of the plate and Betts jumped all over it, blasting it 400 feet out to left field for a no-doubt home run to put the Red Sox up 1-0.

They had an opportunity to add to their lead in the fourth, too, when Mitch Moreland led off with a walk. He’d be eliminated in a fielder’s choice but they eventually got runners on the corners with just one out. Eduardo Núñez lined out to the shortstop, though, before Jackie Bradley Jr. struck out and the runners were stranded.

From there, we fast-forward to the bottom of the sixth with Sale looking to continue his no-hitter. He was on the right track early with two quick outs, but then Joey Rickard had other ideas. It wasn’t hit with authority but a soft line drive fell into center field for a single and the Orioles were in business. It got worse from there, too, when Trey Mancini ripped a double out to left-center field. A rough relay allowed Rickard to score easily — a cleaner play may have resulted in a close play at the plate, though Rickard probably beats it out either way — and Sale went from a no-hitter to having the go-ahead run in scoring position in the blink of an eye. He did escape from there, though, and the Orioles settled for a 1-1 tie.

In the eighth, Betts got things started the right way with a walk, but Martinez and Moreland put two outs on the board very quickly after that. Xander Bogaerts then stepped to the plate, and Betts was very clearly itching to run. He finally took off and Bogaerts ripped a ball at Alberto at third base. The Orioles infielder booted it, which should have led to first and second with two outs for Rafael Devers. Instead, Betts made a very rare misread on the base paths, trying to sneak into third with the ball rolling towards the shortstop position. He was thrown out relatively easily, and that ended the rally in the blink of an eye.

Sale then came out for the eighth with just over 90 pitches under his belt, and Pedro Severino started things off with a base hit into left field. Baltimore tried to bunt him over, but Sale made a great play off the mound to get Severino at second. Richie Martin did get over to second on a stolen base, but two strikeouts ended Sale’s night and kept the game knotted at one. By the end of the outing, the lefty had allowed just the one run in eight innings with 14 strikeouts, no walks, two hit batters and three hits. That’ll do.

The Red Sox then had just one more chance to get this thing done without having to play extra baseball, and Devers started the effort off strong with a base hit. That wouldn’t matter because just three pitches later it was a strike-em-out, throw-em-out and there were suddenly two outs and nobody out. Bradley would draw a walk, but we headed to the bottom of the ninth with the game still tied.

In that bottom of the ninth, Matt Barnes got the call with the 3-4-5 hitters coming up for Baltimore. It did not start off well with Mancini hitting his second double of the night to begin the inning. He got a ground out after that, but then the ground ball he allowed after that headed towards a hole on the right side. Eduardo Núñez stopped it with a diving play to keep the run from scoring. That put runners on the corners with just one out, and a weak ball back to the mound kept the runner on third while recording the second out of the inning. Barnes came back with a huge strikeout to end the inning, though, and we headed to extras.

Both sides went down in order in the tenth, with Brandon Workman pitching the bottom half for the Red Sox. In the eleventh, Moreland drew a leadoff walk and eventually made it to third, but no further than that. Ryan Brasier then came on for a 1-2-3 11th, though it was no normal 1-2-3. Mancini put a charge into a ball that looked to be a walk-off blast, but Bradley…..well, just watch the video below.

Sure enough, because baseball is funny this way, Bradley got a chance to lead off the twelfth. He didn’t get to make more magic, though, instead grounding out. A couple of batters later, Benintendi made it up for him. The Red Sox left fielder got a fastball down in the zone and he put it out over the wall in right-center field, and Boston had their one-run lead back.

That left it up to Heath Hembree in the bottom half. The righty did just fine, striking out the side and closing out the victory. Winner winner, chicken dinner.

The Red Sox will have a day off on Thursday as they travel back to Boston with a .500 record and three straight series victories in their pockets. They’ll be back in action on Friday to start a three-game series against the Mariners. Eduardo Rodriguez will take the mound for that one with Erik Swanson on the mound for Seattle. First pitch is scheduled for 7:10 PM ET.

Over The Monster https://www.overthemonster.com/2019/5/8/18537658/red-sox-orioles-chris-sale-immaculate-inning-jackie-bradley-jr-catch-andrew-benintend-home-run
Categories: Sports