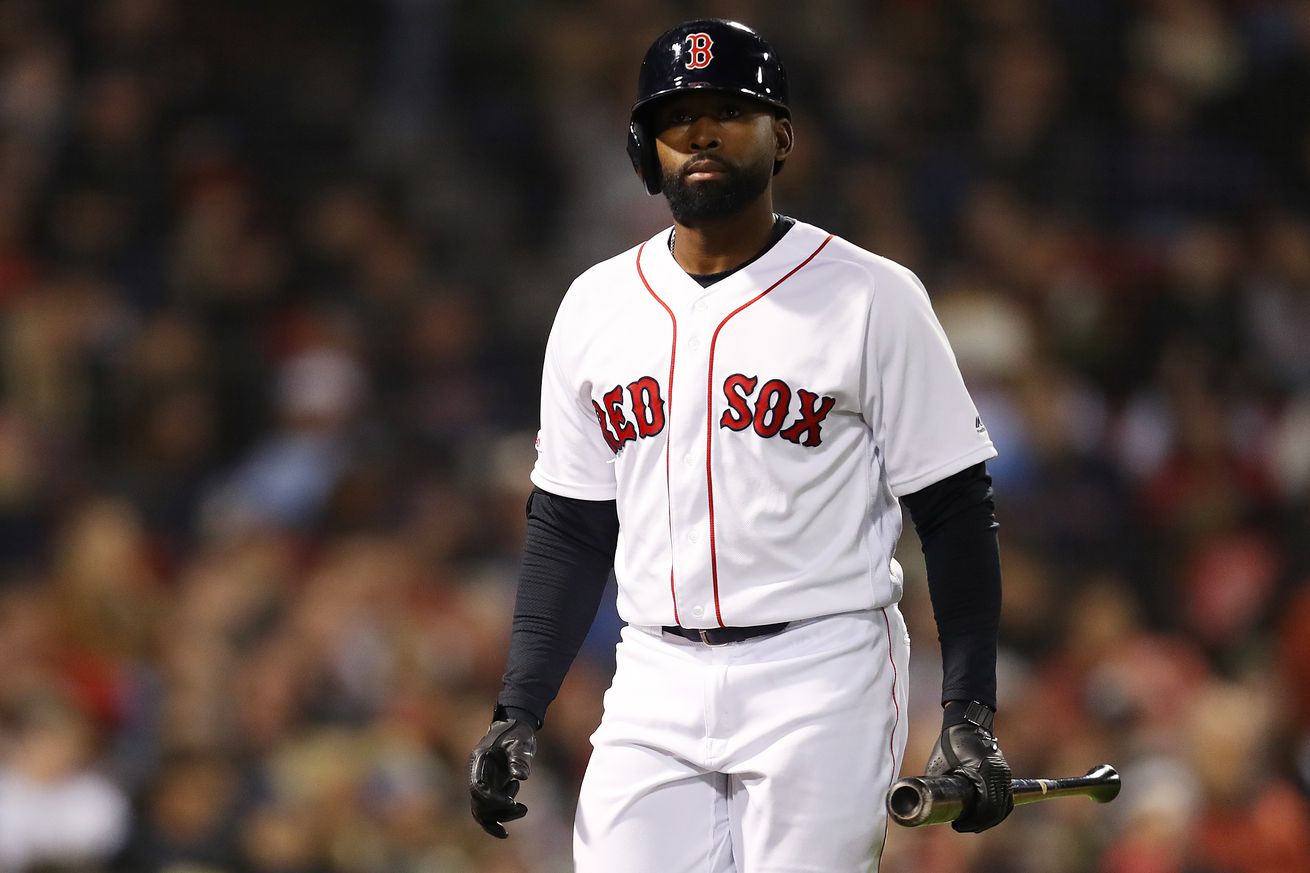 We’ve seen Bradley look lost at the plate before, but is this one different?

At this point in his career, we all know the deal with Jackie Bradley Jr. At times, he’s going to look like an MVP and perhaps even take home an MVP trophy for the second-to-last round of the postseason. At other times, he’s going to look like he doesn’t belong in the major leagues. It can be incredibly frustrating and your mileage may vary as to whether or not it is worth it, but it is what it is at this point. As we saw on Wednesday, his defense is the reason he still plays most every day and why he’s always going to get a relatively long leash to figure things out. It’s arguable whether or not it’s worth it this year — not because of defensive metrics don’t look at defensive metrics on May 9 — because these aren’t just normal, slumping numbers. He’s on another level of misfortune at the plate, putting together what is perhaps the worst run we’ve seen from him.

To this point in the year Bradley has played in 32 games this year and has racked up 106 plate appearances and in that time he is hitting .142/.240/.170 for a wRC+ of 14. Fourteen! To put it another way, he has been a whopping 86 percent worse than the league-average hitter. Remember how bad Sandy León was at the plate last year? He finished with a wRC+ of 33. Chris Owings is the closest qualified hitter to Bradley in terms of wRC+ with a mark of 23, and next closest after that is 41 from Jose Peraza. As I said, slumps are part of the deal with Bradley and we’ve come to expect rough stretches from him. This has been a different level, though.

To be fair to Bradley, this is still a relatively small sample with which we are dealing. That’s not to take anything away from how bad he’s been, because it has certainly been rough. However, there is still some noise here. That being said, I thought it would be worth it to see how this compares on a more granular level to some of his previous slumps. The default position for many, myself included, is that he will eventually turn things around because he always does. Considering just how bad he’s been, however, is that really a fair expectation?

In terms of plate discipline, there aren’t a ton of differences though it hasn’t been exactly the same. On the plus side, Bradley is still drawing a bunch of walks and is doing so more and more as the year goes on. Right now he has a walk rate above ten percent to help get his OBP almost 100 points above his batting average. He walked a bunch during last year’s slump as well, but not in 2017. On the other hand, he’s striking out a ton this year. If you’ll recall, the strikeout rate was Bradley’s major weakness when he first got the majors five years ago, but he’s steadily gotten better there. This year those issues are back with a strikeout rate just north of 30 percent. Even during his bad stretches in recent years that was down around 26 percent. It doesn’t seem like a major difference, but those four percentage points are certainly not nothing.

It’s not really a case of pitchers approaching him differently, either, as his breakdown of hard, breaking and offspeed pitches is roughly the same in comparing all of these stretches. In fact, it’s almost identical to the mix he saw in the second half last year when he posted a 118 wRC+. His swing breakdown is very similar as well, with the big difference coming from the fact that he is simply swinging through more pitches. In terms of whiff rate, his breakdown looks most similar to that second half in 2017, which is not great because he didn’t snap out of that funk until the second half last year. Even compared to then, he’s swinging and missing a little more on every kind of pitch.

Even more than the plate discipline, however, it’s the batted ball profile that really stands out with Bradley right now. So far this year, the center fielder is hitting more ground balls than ever and fewer line drives than ever while also relying too much on pulling the ball and hitting it back up the middle. As we discussed earlier in the year, it’s leading to a lot of outs via the shift. All of this is particularly concerning for a guy who spent the offseason working on a swing to improve his launch angle. It’s worth noting that he is hitting the ball harder than in either of the other two rough stretches, but hitting the ball hard doesn’t mean as much when you’re hitting it low to the part of the field that is loaded with infielders.

There are really two things that stand out here with the ground balls, and they are the sorts of issues that we’ve seen in the past, just multiplied to a new degree. For one thing, a whole lot of them are coming on fastballs. These should obviously be the pitches that are squared up the most, but right now Bradley is hitting the ball on the ground almost 63 percent of the time against hard pitches. That’s higher than his rate on both breaking and offspeed pitches. In the past, even during his worst periods that ground ball rate was at or around 50 percent.

The other issue is where in the zone these ground balls are coming from. Look at his zone plot below showing ground balls on all batted balls from each portion of the zone.

Two things stand out to me here. For one thing, looking at the top third of the zone horizontally, Bradley has put 13 balls in play at that eye level and six of them have been hit on the ground. It’s frustrating, and also a nearly identical rate to the one he put up in the same zone last year. Perhaps even more concerning is the middle third of the zone vertically. There, Bradley has put 24 balls in play and put 17 on the ground for an absurd rate of 71 percent. During last year’s slump his rate in that zone was 40 percent, in 2017 it was 46 percent and after turning it around last year it was 39 percent.

That right there is pretty much the story of Bradley’s struggles. He is doing nothing with pitches that are hittable. That continued on Wednesday night, too, as he saw a few meaty pitches from Andrew Cashner that were fouled off or hit on the ground. Ultimately, I’m still of the belief that things will turn around like they always do, because most of the underlying numbers are similar to those from other slumps in his career from which he was able to recover. Now, it’s about finding a tweak in his mechanics to make sure he stops missing these hittable pitches and starts putting them in the air and away from the shift.

Over The Monster https://www.overthemonster.com/2019/5/9/18538049/jackie-bradley-jr-offense-slump-ground-balls-batted-ball
Categories: Sports