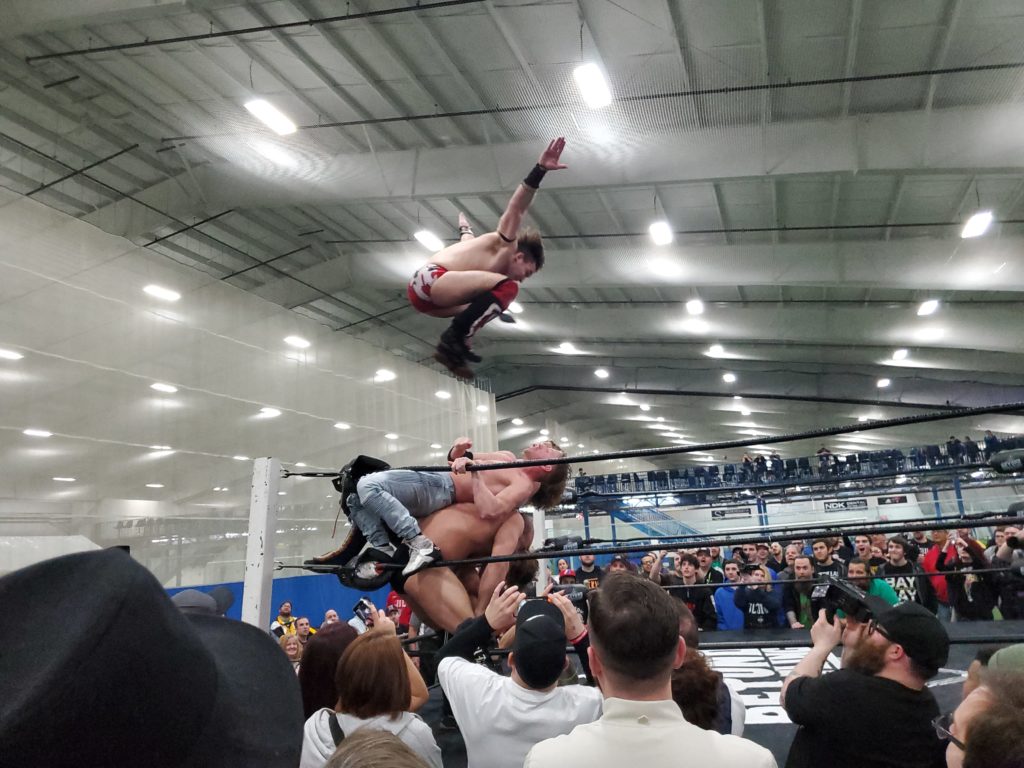 Last night I went to Beyond Wrestling’s 10th birthday show, which was another episode of their weekly show Uncharted Territory. This came 3 days after Lethal Lottery, a 16-competitor tournament held on an indoor soccer field last weekend. Thanks to these weekly Uncharted Territory shows (which I wrote about a couple weeks ago) supplementing Beyond’s standard rotation of bigger events, plus upcoming shows from the inclusivity-focused Boston League of Wicked Wrestlers and monster fighting league Kaiju Big Battel, there’s all kindsa wrasslin’ happening right now. 2019 is apparently the year I fully embrace (bear hug?) indie wrestling, but it still feels like a new thing to me, and attending weekly has helped me really start internalizing wrestlers names and styles, and the rhythm of the shows (if you’re looking for more serious coverage of match results from someone who really knows wrestling, go check out fellow Bostonian Adam Cardoza’s writing at PWInsider).

One of the interesting things about getting a feel for that rhythm is now I know when it’s a bit off. I was really excited for the Lethal Lottery show in North Kingstown, RI last week; it had a really impressive lineup of talent, in matches that should have been incredible. But the venue, an astroturfed warehouse, was a black hole for sound and I could feel the sizable crowds screams and chants being sucked out of the air as soon as they got started. So despite great moments like an out of this world off-the-ring moonsault from Kris Statlander and gags like current title-holder Orange Cassidy hiding from Shockwave the Robot, everything felt a little off. It was still fun to see some great peak-wrestling moments like Supercop Dick Justice using finger guns to threaten the most famous penis in wrestling (Joey Ryan, the King of Dong Style, is best known for flipping people with his junk) but I left feeling disappointed. Live wrestling is more immersive theater than sport and I honestly felt partially responsible for this one feeling like such a one-sided show. 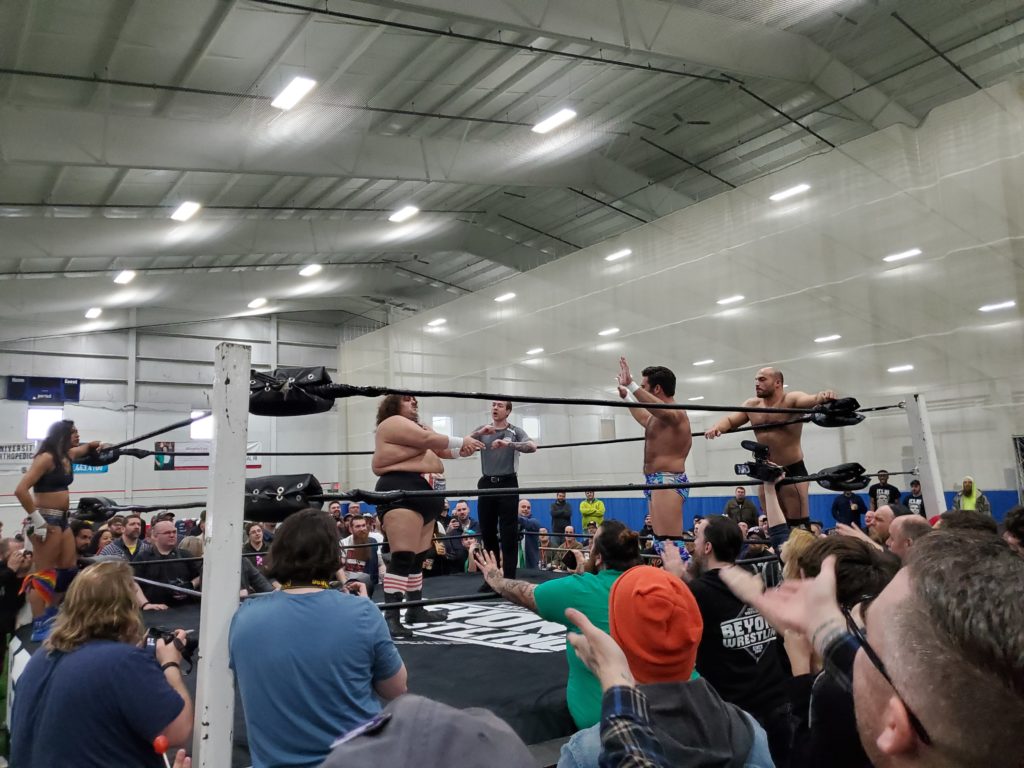 On the plus side, Lethal Lottery did have one of the greatest snack innovations I’ve ever witnessed: waffle cones full of pulled-pork mac-and-cheese. Transforming such a heavy, messy pasta dish into a portable one-handed treat is next-level genius, though I do think the waffle cones are a little too sweet for the savory cheese.

The vibe of the weekend show left me a little worried, but the Wednesday night Uncharted Territory slash birthday show was surprisingly normal for Beyond, just with cake. That’s not a bad thing at all; as usual, Uncharted Territory was electric, with an enthusiastic crowd and a packed room. Thomas Santell, who has a 1950’s, awkward nerd, George McFly gimmick (on entering the ring to Earth Angel, he promptly trips and accidentally drops his thick glasses) picked up another victory, and continues to get a TON of support from the audience. Part of the ‘Discovery Gauntlet’ of lesser known wrestlers, most of the crowd didn’t know who Santell was when he showed up last week. But after winning his match and earning an invite back, he proudly announced that he’d be celebrating the victory with a glass of Ovaltine, instantly winning the crowd over and filling the room with chants of ‘NERD!’ and ‘O-VAL-TINE.’ The evening ended with an incredibly brutal match involving a shopping cart covered in forks but…the less said about that one, the better, I think.

There’s more wrestling in my life now than there ever has been, and that’s certainly not changing this summer. And with such a wide variety of shows to come out to, if your interest is at all piqued, at least one of these shows is sure to powerbomb it’s way straight into your heart <3

BLOWW (Boston League of Wicked Wrestlers) : Bell of the Brawl 2019

The post Went There: Beyond Wrestling’s 10th Birthday, plus Lethal Lottery appeared first on BOSTON HASSLE.