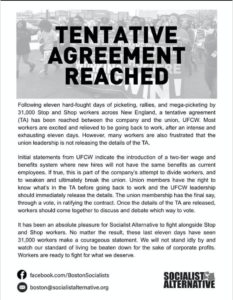 A grey, wet day with the winter chill nipping at the wind.  It may be technically Spring, but it certainly doesn’t feel that way.  Outside Stop & Shop, strikers bundled up with hats and gloves, some with umbrellas to keep the rain at bay.  Most have signs with ‘STRIKE’ boldly written across, some have hand written notes expressing their reasons for striking.

The Stop & Shop workers successfully held their ground, and in doing so they became a shining moment in a historic trend of worker strikes.

On Wednesday May 8th, Lyft and Uber drivers across the nation are making a strike for better wages.  For years, drivers for the two companies have said their pay wasn’t competitive, and because of loopholes classifying them as contractors benefits have been minimal.  The same can’t be said for the company CEOs, however, who plan to make millions off shares and investments from companies like PayPal.

Others are striking to maintain the union rights they have- teachers and students alike are staging walk outs, strikes, and protests to maintain their civil rights.  Strikes in California earlier this year exemplify the teachers’ campaign for better wages, their rights to unionize, and for the rights of their students. Students are mirroring these strike tactics to protest recent assault cases in North Andover, MA and Madison, Texas.

Striking Stop & Shop workers were quick to say how supportive their communities were, and were thankful for those who refused to cross the line.  It wasn’t all support, though. In the moments I was at the line I witnessed strikers be verbally assaulted, told they should have stayed in school and called a ‘soup line’.  In another instance an agitated truck driver broke the line, and aggressively asked the strikers, “Who is going to pay my mortgage?”

Throughout such interactions the protestors were cordial, firm and clear. Mary Ann Curren, a striker at the Stop & Shop Everett store, explained the picketers are eager to be as friendly as possible and make sure the community felt comfortable coming back once the strike was over.

After a lengthy standoff, Stop & Shop and the workers union were able to reach a compromise.  Will other strikers gain the same support?

The best we can do as supporters is, as ever, to join the lines and offer our own activist spirit wherever we can.  Support the Uber/Lyft strike by not only refraining tomorrow, but reach out to your neighbors who may not have another choice. Offer rides, crowdfund taxis, and help people figure out public transit.  Listen to strikers, see what they need, and spread the word.

And as always, don’t cross a picket line.