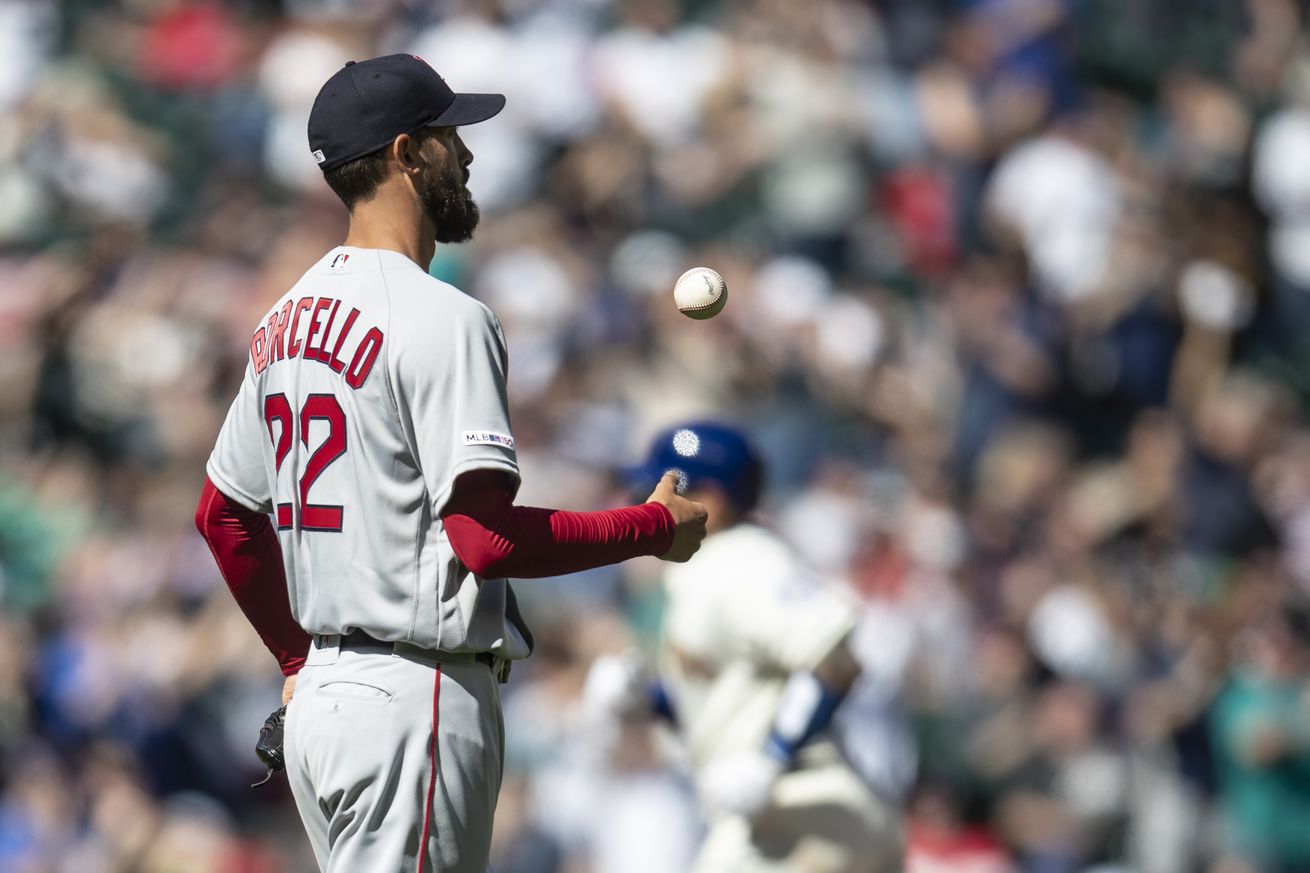 The Mariners started the year as perhaps the hottest team in baseball thanks to a high-powered offense but have started to tail off of late as their pitching has caught up to them.

Down. As I stated above, the Mariners have started to fade a bit as the year has gone on and they are currently in the midst of a really rough stretch. They did win one game in their past series in New York, but overall Seattle has lost nine of their last 11 and 16 of their last 20.

Like many others on the Red Sox pitching staff, Eduardo Rodriguez is starting to get on a bit of a roll. The southpaw is on something of a streak where he puts together an outstanding start every other time out, but considering his last outing the Red Sox will hope that trend ends. In Chicago last weekend Rodriguez tossed six good innings in a blowout victory in which he allowed just one run on six hits and two walks with six strikeouts. Things actually got off to a bit of a rough start, but he settled in in a big way to get through six. The key, as always, is his pitch mix (i.e. not falling too in love with his fastball) and his willingness to attack with two strikes. The Mariners will punish him if he tries to get too cute, as he was in his first outing of the year. Out in Seattle Rodriguez allowed six runs (five earned) over just 4 1⁄3 innings on eight hits and three walks with five strikeouts.

Swanson was part of the trade package that came over from the Yankees in the deal that sent James Paxton to New York, and after starting the year in the minors the 25-year-old righty has since made his major-league debut and a few starts after that. Overall he has tossed 23 2⁄3 innings over four starts plus one relief appearance. It’s been a rough go for the righty in that time, pitching to a 4.94 ERA with a 5.07 FIP and a 6.28 DRA. Control hasn’t seemed to be an issue as he’s allowed just five free passes so far, but he’s also racked up only 17 strikeouts (fewer than seven per nine) and has allowed five homers. To his credit, he did put together his best start of his career last time out when he tossed six shutout innings in Cleveland on only one hit, though he did strike out only three with three walks. He’s a fly ball pitcher who will attack the zone, so the Red Sox offense should be ready to be aggressive and punish hittable pitches early. So far in his young career Swanson has featured a fastball that sits around 93 mph as well as a slider and a changeup.

Speaking of Red Sox pitchers who are looking better and better as the year goes on, Porcello has recovered from a dreadful start to his season and is looking a lot more like his old self. After failing to make it through five innings in each of his first three starts and racking up an ERA above 11.00 in those outings, he’s recorded at least 17 outs in each of his last four with an ERA of 2.45. The big difference has been the control, as he walked at least three in each of those first three outings and has allowed five in his last four combined. What’s interesting has been that his approach pitch-wise has been slightly different in all of these outings, sometimes going back to his two-seam approach, other times peppering in his four-seam a bunch and one start even heavily featuring his slider. As long as he’s hitting the zone and feeling confident in the stuff, things seem to go well for the righty. That was not the case in the year’s first series when he allowed nine runs (four earned) over 2 2⁄3 innings on six hits and four walks with three strikeouts.

It wasn’t all that long ago that any game being started by Hernández was going to be much-watch television, but the former Cy Young winner is not the guy he was in his prime. After always flirting with (and often achieving) sub-3.00 ERAs in the late-aughts and early in this decade, his stuff has dropped off in his 30s and he’s become much more hittable. This season the righty has pitched 33 1⁄3 innings over seven starts with an ERA of 5.20, a FIP of 5.02 and a DRA of 5.30. Despite control better than we’ve ever seen from him, his lack of strikeout stuff is still coming back to bite him and he’s allowed eight homers over those first seven starts. He really got hit hard in his last outing against the Yankees, allowed seven runs (six earned) over five innings on eight hits (three homers), one walk and two strikeouts. A former mid-90s hurler, he now throws mostly sinkers in the 90-mph range and leans most heavily on his curveball while also throwing a changeup.

There is no announced starter yet for Sunday’s game, and it will likely depend on bullpen usage in the first two games of the series. Presumably it will come down to either Hector Velázquez or Josh Smith, though Ryan Weber could potentially earn a start as well after his strong bullpen performance. Either way, it will take at least two pitchers to get through six innings of this one, and that’s if everything goes well.

The Mariners will send their Opening Day starter to the mound for this series finale. Gonzales already has nine starts under his belt thanks to pitching in two of the team’s first three games after they started the year early in Japan. In those nine starts he’s pitched 52 2⁄3 innings while pitching to a 3.08 ERA with a 3.43 FIP and a 4.57 DRA. The DRA suggests a more average pitcher than the well above-average pitcher the other numbers portray. There’s not a ton of swing and miss here and his swinging strike rate (per Baseball Prospectus) is well under 20 percent, but he’s been tough to square up allowing just four homers this year and he’s always paired that with good control. He’s coming off a great start in New York, too, having allowed just a run over six innings on three hits and a walk with three strikeouts. The Red Sox weren’t totally shut down by the southpaw early in the year, scoring four runs (three earned) over 5 1⁄3 innings on nine hits and a walk with four strikeouts. Gonzales will feature a high-80s fastball along with a changeup, a cutter and a curveball.

Roenis Elías was part of the Carson Smith deal that sent Wade Miley to the Mariners, but the lefty was eventually designated for assignment by the Red Sox and eventually traded back to his former team. He’s looked much better this year, earning high leverage innings in a shaky Mariners bullpen.

Hunter Strickland is a former Red Sox draft pick way back in 2007 and was traded in 2009 to the Pirates in the deal that brought Adam LaRoche to Boston. Now 30 years old, he started the year as Seattle’s closer but has been hurt most of the year.

Gerson Bautista was an amateur international signee by the Red Sox in 2013 before being traded at the trade deadline in 2017 for Addison Reed. He was then sent from the Mets to the Mariners this past winter in the Edwin Díaz deal. Like Strickland, he’s currently hurt.

Edwin Encarnación has gotten off to a huge start this season for a team that was planning on trading him before he ever suited up. They couldn’t find a good deal, and he’s now mashing to the tune of a 152 wRC+ with an ISO just below .300. Red Sox fans are awfully familiar with his work from the slugger’s time in Toronto.

Mitch Haniger has gotten off to a huge start at the top of Seattle’s lineup thanks to solid patience and big power that have helped him overcome a high strikeout rate. He’ll also do some damage on the bases if the Red Sox don’t pay attention.

Tim Beckham, you may recall, looked like an MVP to start this season. He’s tapered off while also leading all of baseball in errors, but he still boasts a 129 wRC+, largely thanks to his power stroke.

Domingo Santana’s overall value numbers are being brought down by small sample size defensive metrics, but at the plate he’s walking a lot and using a high BABIP to make his contributions with the bat well above average.

Daniel Vogelbach is off to a monster start and has moved up to the middle of the Mariners lineup thanks to huge power that has manifested in a .347 ISO. He’s also racked up almost as many walks as strikeouts.

Ryon Healy will put the ball in play a fair amount and often does so with authority, but some of his value is cancelled out defensively at third base.

Omar Narváez doesn’t hit for the same power as former Mariners catcher Mike Zunino, but he makes more contact and draws more walks and has a 133 wRC+ to start this 2019 season.

Dee Gordon is who he always is. He won’t walk much, he won’t strike out much and he won’t hit for much power. But he will rack up plenty of singles and then do damage with his legs. He also got hit in the hand in Thursday’s game and had to leave, so there’s a chance he’ll be on the IL by the time this series actually starts.

Anthony Swarzak is among a mess of Mariners relievers vying for late-inning work. He’s only pitched ten innings this year, but it’s been rough as he’s getting strikeouts but struggling mightily with command with seven walks and five homers.

Cory Gearrin has recovered from a rough stretch early in the year with a 1.64 ERA and 15 strikeouts and three walks over his last 11 innings.

Elías and Zac Rosscup provide the top two left-handed looks in the Mariners bullpen and can expect to see plenty of looks in close games this weekend.

Strickland, as mentioned, is on the IL. He hurt himself in the series against the Red Sox, suffering a lat strain. He’ll be out for at least another few weeks, and likely longer.

Bautista is also on the IL as mentioned above. He’s rehabbing but may be optioned to Triple-A even when that rehab is complete.

Kyle Seager underwent hand surgery before the season started and was placed on the 60-day IL. He could return as soon as eligible in late-May.

Wade LeBlanc has been out for a few weeks with an oblique injury but could start a rehab assignment soon.

Sam Tuivailala is currently rehabbing and could be back in action after an Achilles injury soon after this weekend series.

It’s certainly not going to be a perfect weekend in Boston, though the first two games at least should be fine. There are some showers possible on Friday, but it shouldn’t be enough to cause more than a short delay at worst. Sunday could be the real issue with some showers forecast all day with rain picking up later in the day, but right now things look like they should be good, if not totally pleasant for fans.

Over The Monster https://www.overthemonster.com/2019/5/10/18563357/red-sox-mariners-series-preview-eduardo-rodriguez-rick-porcello-marco-gonzales-felx-hernandez
Categories: Sports