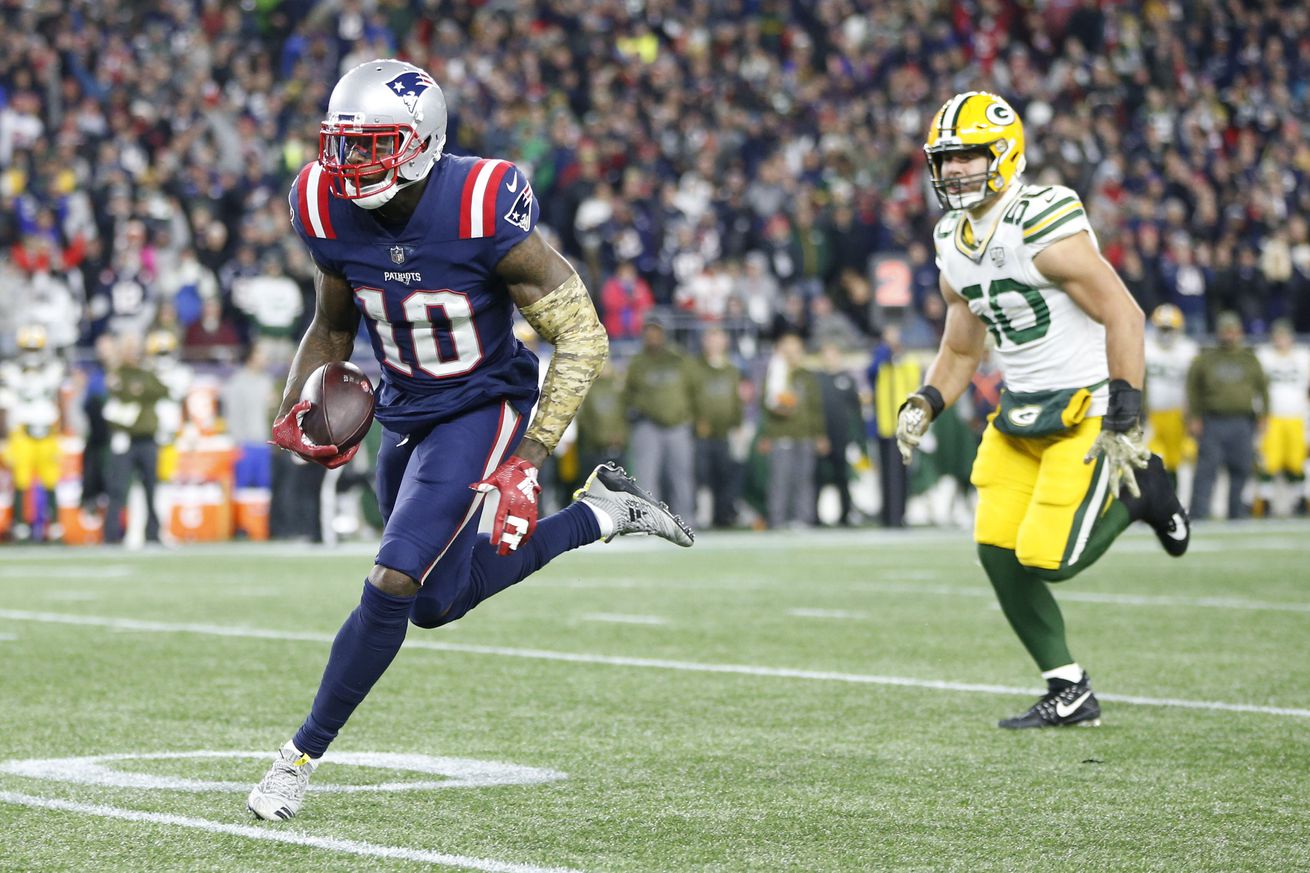 Our offseason countdown continues with the Number 13 Most Memorable Patriots Moment of 2018.

The draft is over, rookie minicamps are underway, and we’re rapidly approaching that glorious unofficial start of summer known as Memorial Day Weekend. Why not slack off on a lazy Saturday by continuing the countdown of the Top 20 Most Memorable Patriots Moments of 2018.

20. Danny Etling gets half of the Giants fired with an 86 yard touchdown run.
19. The Patriots demolish the Jets at home to secure a playoff bye.
18. Julian Edelman bounces off a Bill and into the end zone on a 4th down conversion.
17. Some punt team acrobatics keep the Steelers from getting a touchback.
16. Gronk magic returns with a 34 yard touchdown seam route catch against the New York Jets.
15. James Develin finds the end zone twice against the Minnesota Vikings.
14. The New England Patriots trade for Josh Gordon.

At Number 13, we head back to what was supposed to be an epic quarterback battle that didn’t quite pan out the way folks had hopes.

Brady vs. Rodgers. The greatest quarterback to ever put on a helmet, capable of doing things nobody else could ever do, a complete revolution of the position and the game as a whole…and that quarterback who plays for the Patriots.

At least that’s the picture the mainstream media likes to paint when it comes to Rodgers and Brady, quarterbacks who have, remarkably, only met head-to-head twice in their careers. So when the Packers, who beat the Patriots in Green Bay in 2014, came into Foxboro on November 4th, 2018 for a Sunday Night matchup, the hype was tremendous. The Packers were having a bit of a see-saw year, sitting at 3-3 and struggling to maintain consistency. The Pats, however, had rattled off 5 straight since Week 4 and were looking to keep the momentum going as the 2nd half of the season got underway. A lot of people had Green Bay vs. New England as their Super Bowl picks back in August, and while neither team looked dominant, the talent of the 2 QBs leading their respective teams was just too great not to respect.

The game was fairly close for the first three quarters; New England jumped to 7-0 lead on their first possession, but Green Bay hung around, and both teams went into the locker room at halftime with the Patriots up 17-10. The Packers recieved the opening kickoff to start the third quarter and went straight down the field in just seven plays and three minutes to tie it right up at 17. As Collinsworth tried his best to stop drooling over what he just saw, the Patriots got right to work, answering with their own 74 yard drive that brought the offense all the way down to the GB one yard line. Unfortunately, James White was stuffed on 1st and goal, Cordarrelle Patterson was stuffed on 2nd and goal, Chris Hogan couldn’t get open on 3rd and goal, and a pass intended for Josh Gordon fell incomplete on 4th and goal, thus stalling the drive and returning possession to Rodgers – who would gain three yards on three plays and punt it right back.

The Patriots couldn’t get anything going, however, and once again the offense left the field with no points on the board. The Packers, starting from their own 7, quickly made it all the way to the New England 34 on back-to-back 25 yard grabs from rookie Marquez Valdes-Scantling, and Green Bay seemed poised to take their first lead of the game as the 3rd quarter came to a close.

However, on 1st and 10 from the 34, on the very first play of the fourth, running back Aaron Jones coughed up the ball on a tackle from Lawrence Guy, recovered by Stephon Gilmore. Just like that, momentum was back with New England, and Tommy B wasn’t about to let another opportunity go to waste.

The Patriots went 76 yards on 10 plays, giving James White the opportunity to punch it in from the one yard line – fitting, seeing as how White was the main reason the Patriots were down there in the first place.

As well as Julian Edelman, of course.

On 2nd and 6 with the Patriots driving into Packer territory, Brady hit Edelman on a quick screen in the backfield. He didn’t even try to fake the run, instead looking downfield as if to hit a streaking…Dwayne Allen (go ahead and watch the replay. Allen was the decoy). As the defense sat back on their heels, not biting on the fake, James White snuck out into the opposite side of the field, just behind the entire offensive line, and got into position just as Edelman hit him right between the numbers. Running behind an absolute wall of beef, White ran completely untouched down to the 10 yard line and down to the 2 for a 37 yard gain. It’s only fair that he then got to register the score.

With the Patriots up 24-17 and 2nd half possessions at a premium, the Packers needed to answer. Unfortunately for Green Bay, the question was asked by Trey Flowers and Adrian Claiborne, as they sacked Rodgers for a nine yard loss on 3rd and 6 to set up an unmanageable 4th and 16, forcing another punt.

The Patriots needed just three plays to put the game away for good. The first, a Julian Edelman reverse, went for 17. The next, a James White run, went for no gain. And the next, a pass to Josh Gordon, ended up in the end zone.

It was not, however, an ordinary pass.

On 2nd and 10 from the 45, Tommy B sent Chris Hogan in motion and faked the screen to him at the snap. The secondary, still stinging from getting caught on the last screen, immediately sprinted towards the line of scrimmage, leaving both Edelman and Gordon wide open on identical slant routes. Brady overthrew Edelman, who reached for the ball, and hit Gordon right in stride as he raced to the end zone for a 55 yard TD. The Packer defense, caught with their pants down, could only watch as Gordon put the game away. 31-17 is what the score would remain as the Pats moved to 7-3 and the Packers dropped to 3-4.

Not only was this game a great team win over a respected NFC opponent, but it was highlighted by these two amazing plays, both of which are awesome on their own, but combined to seal the win makes them that much sweeter. All in primetime too, over the QB that a lot of pundits can’t crown the GOAT fast enough.

Now let the record show that I’m a big Aaron Rodgers fan. I think he’s phenomenal, and watching him play is a privilege. But I called him overrated after this game, and I stand by that – although that isn’t his fault, nor is that on any Packer fan. Rodgers himself admits Brady is better than he is, and most Packers fans will gladly admit the same while still bending the knee to the King of their North. But with Peyton Manning gone and the Brady vs. Manning debate definitively put to bed, there needs to be another QB to talk about in comparison to Brady in order for failing sports journalists and ego-maniacal windbags to bloviate about in a desperate attempt to draw ratings, and Rodgers is that guy. That’s not a knock on Rodgers, nor is it an indictment of his ability; the media started this ridiculous conversation, and that’s all there is to it. So Brady beating Rodgers here didn’t at all factor into my decision to place this moment here at Number 13; it was the primetime win, and the awesome plays that led to it, that gave it the distinction.