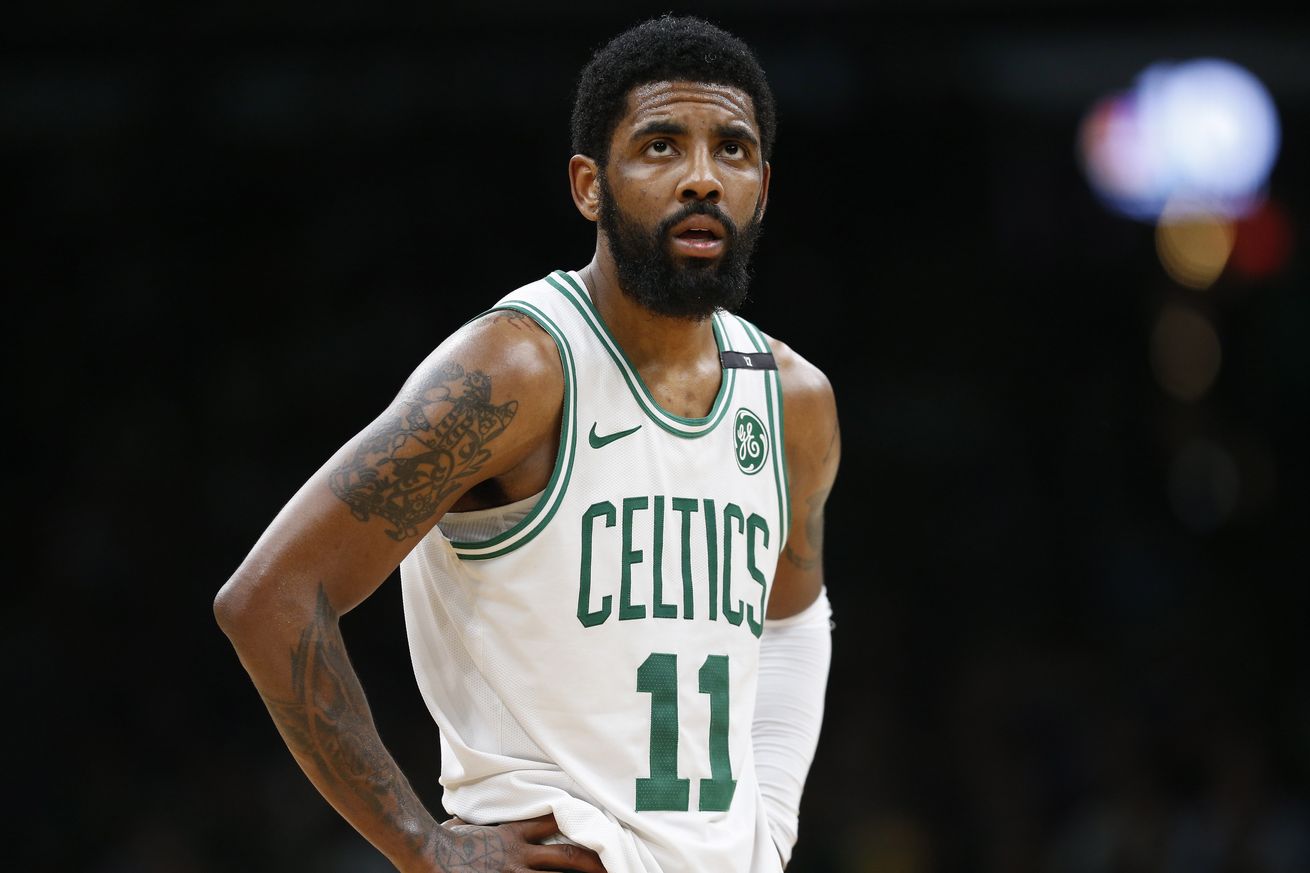 Kyrie Irving tried to be someone he’s not. Is it right to be mad about that?

In the zeitgeist trial of “what kind of a person is Kyrie Irving,” there are no absolutes. The Celtics were roundly flattened by a superior Bucks team after Irving’s shot and defensive effort deserted him in the three biggest games of the year. There’s going to be a cross-examination of his character that will play out (largely in a very public manner) over the next two months, and the following clip is going to be Exhibit A.

“If you guys will have me back, I plan on re-signing here.” – @KyrieIrving pic.twitter.com/0wDLzuv5WL

There’s not something that’s more definitively American about our discourse than a hatred of hypocrisy. A quick perusal of Twitter will find comparisons of what someone said at some point with another screenshot of them saying something else. GOTCHA! When used against someone who disagrees with you or you don’t like, hypocrisy is the damning evidence of character; the smoking gun that proves someone is full of crap and you were right about them the whole time. If it’s someone you like, however, somebody is being unfair to them in the interest of proving themselves correct.

The reason for a duality like this is simplicity. We want to view people as concrete solid forms, something that simply is something and simply is not something else. Unfortunately, (or maybe fortunately) people aren’t like that. Everyone, no matter who they are, has an idea of what they want to be to everybody else. Who someone actually is almost never is in line with that idea. The gap in between the two is where hypocrisy is born, and how someone views that hypocrisy is usually tied to what the observer thinks of who the person is “trying to be.”

Irving wants to be classic paragon of an NBA superstar. I don’t think there is much question about that. I think he wants to become synonymous with the game as many of the Hall of Famers we’ve come to know and love are. After all, when you are good enough to be defined by the basketball that you played, that ends up being your defining characteristic.

Well, no one is just one characteristic. Michael Jordan was ridiculously competitive, Shaquille O’Neal loved to have fun, Magic Johnson was gregarious, Larry Bird hurt his back tarring his own driveway and drinking beer, LeBron James is becoming a basketball billionaire, and Kevin Durant makes burners to argue with trolls on the internet. None of these men really have all that much in common besides winning a lot of basketball games, but they have all transcended (or are in the process of transcending) into becoming a pantheon of basketball spirits whose names are murmured with reverence.

Still, there’s not much room for that kind of nuance in sports writing, particularly in the present tense. Guys are either “wired correctly” or not. Stars are “franchise players” or not. Franchise players are “all-time greats” or they aren’t. For the current players entering their prime, they grew up watching a particularly hegemonic, sequestered era of NBA coverage. The internet (and Twitter) hadn’t achieved total proliferation that we have today. Players couldn’t directly tweet and reports who didn’t have a desk job at a paper of record had no way to publish their own reporting. There were no “blog boys,” only people who were getting paid to report on the team.

Today, we as an audience are closer than ever to our NBA heroes. We can tweet at them and have them tell us to “shut up lil buster”. By that same token, the players find themselves in a more direct contact with the audience. Applause and praise is more readily heard, but so are the heckles, boos, and jeers. Where the NBA used to be a movie set, where only film critics could tut-tut a poor effort, it is now a Shakespearean play hall, with all the actors in firing line of both flowers and rotten tomatoes.

This is the moment that Kyrie Irving finds himself in today. He’s a young man who grew up watching coverage of “Mamba mentality” and America’s desire to witness sports greatness. No matter how difficult or arrogant a player might be, accountability, greatness, and leadership would expunge all splotches from a player’s legacy. If you want to be viewed as a basketball great, it’s usually not enough to be a great basketball player. You need to be an extraordinary personality.

If there’s no fun anecdotes, no personality quirks, or vicious arrogance, there’s not much of a story beyond “this guy is good.” There’s gatekeeping when it comes to NBA legends, and the masses will pull viciously at anyone trying to ascend who they don’t deem worthy. This is the paradox of being “the second best player on a championship team.” Remain with a better player and you are defined by your complacency. However, if you leave, you become a diva bewitched by an inflated ego.

The catastrophic implosion of Irving’s only postseason in Boston is a cool glass of water in the narrative desert of the latter. Even outside of Cavaliers fans who may view Irving as the malcontent who closed a Cleveland championship window too soon, many NBA fans see Irving as an avatar for the fame avarice in the NBA. It’s a fact that Irving made choices that led to him being the first significant departing member of a “small market” championship team.

Despite continued gaffes that have plagued “big market” NBA teams over the recent history of the league (see the recent history of either New York team, the Lakers, or any other time in the Clippers history besides recent history), a “small market” championship team continues to be narratively viewed as a blooming rose through the crack in the pavement. Something rare, effervescent, and beautiful; a fragility to be protected from the whims of greedy players who would stomp out a precious treasure for their own gains.

What better incarnation of that is there than a player with a new Hollywood movie, leaving the best player in world, and leaving no meaningful resistance to the hated empire of the Golden State Warriors in his wake?

Irving’s playoff meltdown satisfies the craving for divine justice; an Aesop’s ending for a player who didn’t do things the “right way” and got exactly what he asked for. The way LeBron James treated him didn’t matter because LeBron James stayed (for an entire extra season). What it’s like to work for Dan Gilbert and his way of doing business doesn’t particularly matter either, because he’s the owner of the team and that’s simply that. Irving is a player who simply didn’t know how good he had it and bit off more than he could chew.

Simply deciding a work situation isn’t sustainable just isn’t a good enough excuse. Change must be driven by a desire for legacy or status because that’s what matters to the audience, otherwise known as “the fans.” The line between wanting to play professional basketball the best that you can and being a NBA legend is blurred because the former is entirely dependent on what the audience believes. We want players to care about being these divine figures of the sport, because that’s what we actually care about as fans. We want to see someone labor to win our reverence, and then make a judgement about whether or not they deserve it.

Even this piece, with me giving my own thoughts on what might be going through the head of someone with a wildly different set of life circumstances, plays into that same vicious cycle. Perhaps I’d just like to think that Irving is someone not that different from me, and someone whom I can empathize with. I have to leave open the possibility to myself that I am projecting too much of my own view of things onto someone who has publicly voiced his displeasure over scrutinization of his character through the lens of sound bites and body language. But, at least for now, I don’t see someone who is selfish, mean-spirited, and poisoned by his own desires. I just see someone who did what he could to remake himself into a Kyrie Irving he thought the audience would applaud for.

At the end of the day, Kyrie looks to me like a tired, defeated guy who tried to bridge the gap between who he is and who we wanted him to be. He made it more difficult that it needed to be and there’s plenty you can fairly criticize about his choices. However, regardless of the results of July 7th and the coming years, I’ll remember these two years of Irving’s tenure as that of a player who challenged himself, risked his personal legacy, and came up short in the attempt.

Whether courageous or foolish, he tried to give us what he thought we wanted.

If that’s not tragedy, I’m not sure what is.