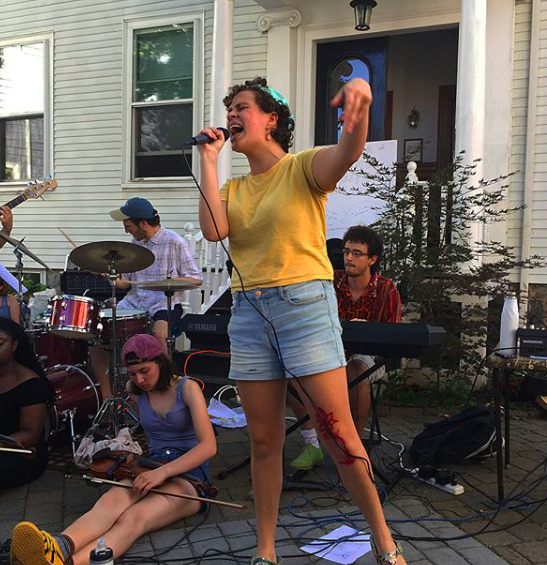 Erin’s vocal runs were beautiful, ranging from scat singing to chilling pitches, full of both emotion and control. The end of ‘Here (Paradise)’ especially shocks me in the control she carries between two pitches in the last forty seconds. Charles is no hidden talent either he creates tonal color that draws your ear to the keyboard.

Their sound feels somewhere in between jazz and funk, reminiscent of Lianne La Havas early work. There is a certain breakdown quality to the rhythm, really letting you feel every breath and syllable. Minimalism in lyrics but certainly not in emotions, or musical texture. Lush with depth, their compositions hold both sharpness to syllabic qualities and smoothness in stretches.
The love from the audience is incredibly charming, Erin and Charles’ father & older brother in the audience dancing enthusiastically, not to mention the rest of the crowd also screaming.
My favorite song was their ballad performed together, tears brought to Erin Vadala’s eyes: “Im gonna put your name in this” she cried out. Enraptured by their performance, I wanted to understand where they came from, musically, emotionally, and personally. I sent along some questions and received stimulating responses.

Boston Hassle: What was the inspiration behind your songs, both musically & lyrically?

Erin: Each of my songs holds a slightly different intention, which I may have to describe in more metaphorical terms: It is like I have some particular space within myself that starts to shift and find a purpose as it becomes formed enough to be expressed. As I become familiar with it, I decide to put that intention into a song by articulating and exploring it. Oftentimes, that means that I start with a short key thought, like “I miss my brother,” or “I don’t know how I feel right now,” and I use that main idea as a starting point. It could also be something like, “I want to show my friend how much I appreciate them,” or “this new scientific concept seems significant” and I go from there.

In that way, my songs get their inspiration before the music or lyrics really come in. From there, I have lots of other little inspirations that help me create chords and lyrics that I feel support my initial idea. Those things happen or come to me in all different manners and orders, which hopefully helps to create variety within my songs.

So I think part of what I’m saying is that there is not one single inspiration behind all of my songs, and yet in some ways every time is very similar. Each piece’s initial intention and subsequent songwriting process is unique, but I feel best about every one when they come from an honest place within myself, and paying attention to myself internally is how I can stay honest. I don’t think I can really be inspired by how I expect my work to be received, or other external things. I just have to trust that when I am lucky enough to share, some people will connect with it and gain something from what they hear.

Boston Hassle: How did you assemble your band?

Erin: I started writing the music about 6 years ago, when I was 12, on piano. I was such a beginner at the instrument, but I wasn’t ready to hand that responsibility over to someone else because I didn’t know how to express my vision to people. Eventually, I realized two things: the magic of playing with a full band is too good to give up on, and Charles and I make a great pair in leading the group towards this vision. Thus, we started playing my songs together as a duo and sought out the other instruments as a team. He started writing arrangements for violin players, and I was so excited because I realized how special it would be to combine our skills.

Charles: We have connected with most of the band through either school or Berklee City Music. After deciding that our full band should include 2 violins, Lila was recommended and introduced to us by a mutual friend. I knew Fabienne from Berklee City Music, where we took weekly classes at Berklee during high school. After rehearsing with them once in the summer of 2017, it was clear they were the right people to join the band and communicate Erin’s vision. I met Ryan at UMass Amherst when we started playing Jazz brunch at the dining hall together every week. We had a LOT of fun playing together, and built up a musical chemistry very quickly. When we needed a drummer for the band I knew it should be Ryan. I met Yuval (our guitarist) the same way, really getting along in the jazz setting before asking him to join the band.

BH: What goal do you hope to reach with your music?

Erin: I was at an open mic one night, and I decided to go up and play a song I had written, about my guilt after being taken advantage of. It was hard for me to write that song, but after I played it I felt really good. So, one of my goals is to help myself grow and heal with my music. But something special happened that night, more the point of this story, which is that a woman came up to me afterwards, and she started crying, and she said that she had needed to hear that song. I started crying too, and I was so in awe that my voice and my songs could have that effect on people. That is what I want with our music. That is why I want people to listen to our album, and watch us perform, because I think we can really connect.

Charles: Similar to Erin, I think it is a great feeling when our music impacts people, especially at live performances when we can see it. I would also say that it’s important to us to reach as many people as we can without letting things like clout and money cloud our intention and voice. If our music provides comfort or inspiration to one person (even if it is a member of the band!) then we have succeeded.

BH: When did you start playing your respective instruments?

Charles: I started taking piano lessons at the age of 9, but I always like to play around at the piano at my Grandparents’ house before that. It was an interest of mine from very early on. Yuval has been playing guitar since he was 11, and Ryan has been playing drums since he was 9. Lila started playing violin since she was four years old, and Fabienne (we are waiting for her to get back to us. We figured we’d send this to you now anyway, because it’s a small detail and we didn’t want to take too long) For each of us, our instrument is a major part of our life!

Erin: With singing it’s hard to say exactly when I started, because I’ve been doing it forever, but I would say that once Charles started taking piano lessons (when I was 5), I always wanted to do music with him and sing with him.

BH: Which artists/bands inspire you?

Erin: Lianne La Havas inspires me both as a songwriter and a singer. She has such great skill as a vocalist, and many of her songs make me cry. I absolutely LOVE songs that make me cry. I also love Bent Knee, a smaller band from Boston that reaaallyy digs in. Their music is really intense and dynamic, and it has a wide range of textures that shows how many different influences it has.

Charles: Two artists that inspire me a lot are Stevie Wonder and Ennio Morricone. They convey a lot of emotion in their music, and it sounds really good! I definitely take influence from their harmonic choices. I also am often inspired by the musicians in my life: our band, my friends from the jazz department, my bandmates in Sunshine Brothers Inc., and all of my music educators. I know a lot of people that work really hard at their craft and use care and intention when they share their art. I am constantly inspired by my sister in the way she expresses herself with such honesty, vulnerability, and creativity.

BH: What time of the day do you feel the most creative/ how do you get into a creative space?

Erin: I think I feel most creative at night. Sometimes when I can’t sleep, I paint something in my room and write some poems or something, and I wake up in the morning, saying “What HAPPENED last night?? What is all this stuff?” But really, it can happen at any time, if that feeling wells up inside me to create.

Charles: For me, it is hard to predict when creativity will hit. When I play with EVCVTB, or with Ryan and Yuval in jazz settings, I feel very creative, because there is support but there is also room to explore. When people are jamming, and creative energy is in the room, it is hard not to join in. When I’m alone, creativity comes almost randomly when I get in the flow of writing a verse, arranging a song, or improvising on the piano.

Erin Vadala and her brother Charles Vadala and their band are releasing their debut album on June 1st! With three singles out already from that album, I’m excited to hear the other ten. May 13 they will drop their fourth single, Take You on a Journey.

The post An Interview with Erin Vandala and Charles Vandala by Maggie Kraine appeared first on BOSTON HASSLE.