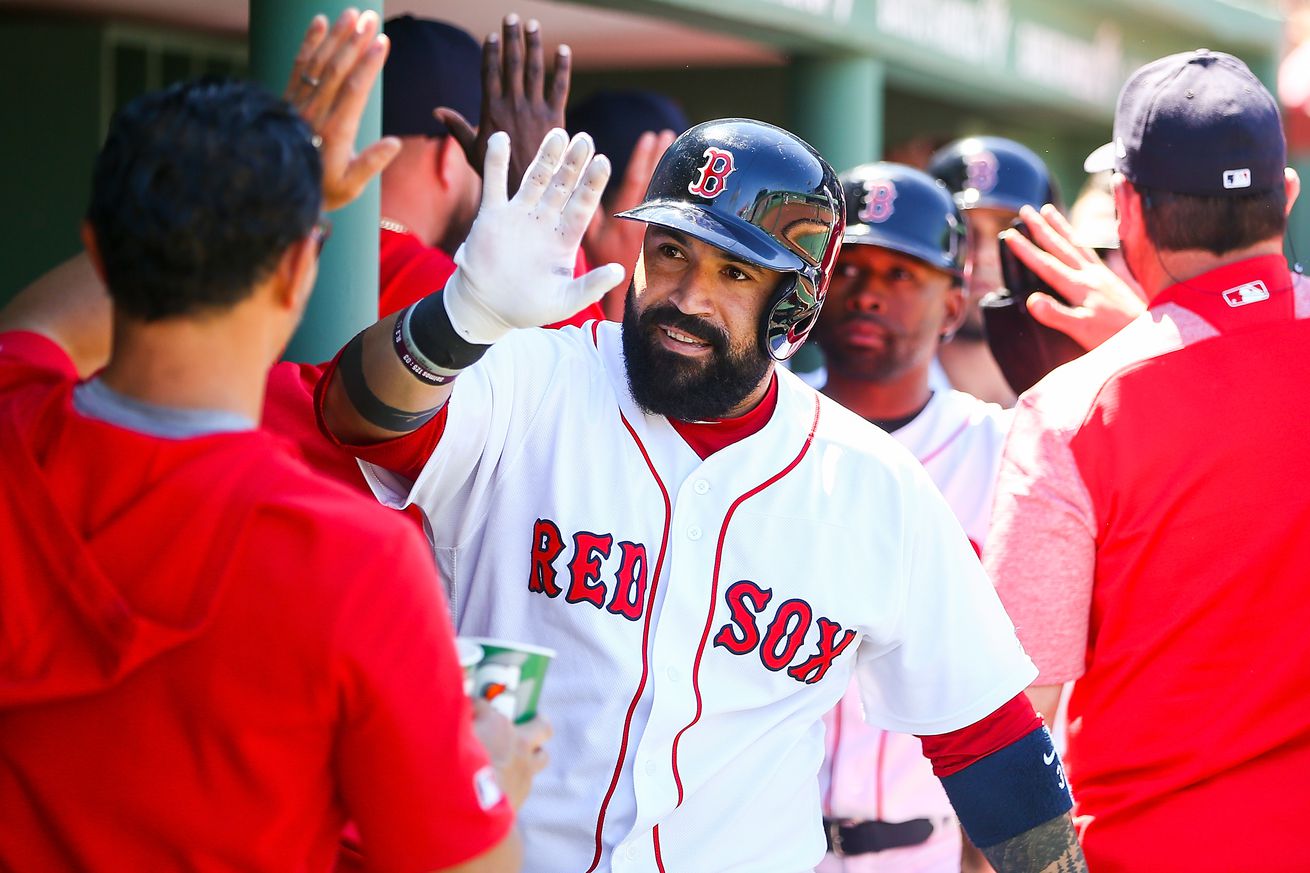 Make it four wins in a row for the Red Sox. And seven out of eight. And ten out of twelve. And fifteen out of twenty one. They are playing pretty good baseball, in my opinion. This latest victory seemed awfully familiar, both in terms of feeling a lot like the 2018 club and also like some of their other wins of late. Boston actually started this game in a hole as Rick Porcello allowed four runs in the top half of the first, but it was all good from there. Porcello cruised after that rough first inning and pitched into the seventh inning, not allowing another hit never mind another run. Meanwhile, the offense exploded for eight runs in the third inning to take a commanding five-run lead. Boston hitters were on base a whole lot in this game, drawing a startling eleven walks with every starter getting on via at least one free pass on the day. Things are going well.

The Red Sox headed into Saturday afternoon’s game against the Mariners possessing a record over .500 for the first time this season, and they were looking to make sure they would be able to keep that going for the rest of the season. The first step there, of course, would be winning this game at hand. Eduardo Rodriguez was incredible on Friday night, but despite the Mariners’ recent slide down the standings their offense is still one to be reckoned with. Rick Porcello took the mound for Saturday’s game, and he learned that lesson early on.

The Red Sox righty did start his day off with a nice, four-pitch strikeout, but things quickly took a turn for the worse after that. Former Phillies top prospect J.P. Crawford came through with a one-out single, then Seattle started to pour it on with a two-out rally. Daniel Vogelbach ripped a 3-1 pitch down the right field line down into the corner, allowing Crawford to score and give Seattle a 1-0 lead. Domingo Santana then followed that up with a line drive double into left-center field, doubling their lead. That brought Jay Bruce to the plate, and he got a first-pitch fastball middle-in and smoked it out into the Red Sox bullpen. By the time the dust had settled, Porcello dug himself and his team into a 4-0 hole after just a half-inning of play.

So, the Red Sox offense had some work to do, and oh boy did they do it. They started off in the second inning with — who else? — Mitch Moreland. The first baseman has been crushing the ball pretty much every time he puts it in play, and this one was no different. He got a middle-in fastball of his own, and he blasted it way out over the wall in right field, getting Boston to within three.

They wouldn’t get any more in that inning, but the third was where the game changed in the blink of an eye. After Andrew Benintendi led off the inning with a line out, Mookie Betts drew a walk. Then J.D. Martinez hit a single. Then Moreland hit a single of his own, and the bases were loaded. Xander Bogaerts contributed his own single to cut the lead in half before Rafael Devers added yet another single, this one tying the game. They wouldn’t stop there, either. Michael Chavis re-loaded the bases by drawing a walk before Jackie Bradley Jr. — you guessed it — singled. That would put Boston up two, and Sandy León stepped up to the dish. The catcher squared to bunt a couple time in the at bat, but fortunately he ended up swinging when it mattered. Somewhat shockingly he took a fastball on the inner half of the zone and blasted it out into the Monster Seats. Just like that it was a 9-4 lead thanks to eight straight baserunners that included five straight singles.

Meanwhile, Porcello was settling into the game nicely after the brutal first inning. The righty came through with a 1-2-3 inning in the second, though the third started with an error charged to the pitcher. It was a strange play, as Edwin Encarnación popped one up right in front of the mound. Porcello was ready to grab it, which is rare for a pitcher, but León also went for it. Long story short, their gloves collided and nobody caught it. I probably wouldn’t given the error to León, but really it’s a nice reminder that errors alone are a poor judge of defense. That put the leadoff man on base, but Porcello came back with a pair of strikeouts and a ground ball to get himself out of the inning.

From there, he really started to groove. He retired three in a row in the fourth, then did the same in the fifth before doing the same in the sixth. In all, the righty retired 14 straight batters and didn’t allow a hit over his last 5 2⁄3 innings of work. He was taken out of the game after recording two outs in the seveth, and by the end of high night Porcello had tossed 6 2⁄3 innings in which he allowed just the four runs on five hits with five strikeouts and a walk. Brandon Workman came on in relief and issued a walk of his own before recording the final out. He is up to 31 consecutive outs without allowing a hit, though he does have eleven walks in that time.

Ryan Brasier came on for the eighth looking to come back from what’s been a rough little stretch for him. He did well in this five-run contest, tossing a 1-2-3 inning that ended with a strikeout. The ninth belonged to Colten Brewer, who have up a solo homer to Omar Narváez but retired the other three batters he faced to finish off the victory.

The Red Sox will be back out there on Sunday afternoon looking to complete a sweep of Seattle and get a little revenge for the early-season beatdown they suffered out west. As of this writing the Red Sox have still not announced a starter for Sunday’s game, though Hector Velázquez is the likely choice. The Mariners will send out Marco Gonzales. First pitch is scheduled for 1:05 PM ET.

Over The Monster https://www.overthemonster.com/2019/5/11/18615961/red-sox-mariners-rafael-devers-mitch-moreland-rick-porcello-sandy-leon
Categories: Sports