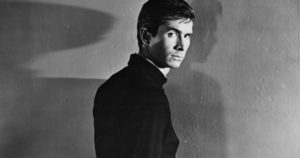 “Well,” Norman Bates shrugs nonchalantly, “After all, a boy’s best friend is his mother.”

Deemed “culturally, historically, or aesthetically significant” by the National Film Registry, this creepy, black-and-white flick is the pinnacle of classic cinema and a landmark for films of the horror and thriller genres. Unnerving, shocking, and skin-crawling (even by today’s standards), Psycho opened up multiple avenues and inspired countless filmmakers over the years, and continues to be a significant narrative in cinema today.

Marion Crane (Janet Leigh) snags money that she was supposed to deposit at a bank for a client and hits the road for California. With an increasingly guilty conscience, she drives erratically down the highway and into the night in order to escape any repercussions that may come for her. She feels like she’s being hunted. In California, she hopes to marry her indebted fling, Sam Loomis (John Gavin), and start a new, brilliant life together.

She’s not so lucky.

As thunder rolls in and it begins to downpour to the point of nearly flooding the road, Crane searches for shelter from the storm in Fairvale, California. Resigning to the fact that she can’t drive any longer without getting into an accident, she peers through her blurred windshield to catch sight of flickering neon lights through the rain that nefariously spell out Bates Motel – Vacancy. Stopping for a bed for the night, she is taken in by Norman Bates, the gangly, clean-cut boy-next-door and owner of the motel. He is also henpecked beyond belief. The reason? He takes care of his invalid mother in the old Victorian house on the hill that looks down upon the motel like a gargoyle. Crane and Bates have dinner. He’s awkward. She’s mildly weirded out. They go their separate ways for the night, and Crane is eager to set out the next morning early to get to Loomis.

Later on in the night, Norman finds her mangled corpse in a rippling pool of blood after she is murdered in the shower in her motel room. He’s shocked and repulsed, cupping a hand over his mouth in anguish, his eyes shut tight, breathing heavy.

But who is he kidding? He knows just who did it.

He hides the body for frail Mrs. Bates – as every good son does – and that’s when the investigation comes rolling through the rickety Californian motel, complete with Arbogast, Loomis, and Crane’s sister, Lila (Vera Miles), hot on Bates’ tail. Who are Norma and Norman Bates? What are they hiding up there in the house on the hill?

The first time I saw Psycho, I was young (lucky for me, my mother’s a Hitchcock fan), and I was immediately enthralled by it. It’s spellbinding: the black and white cinematography, the stunning acting, the eerie, unsettling, calming tone that hums under every word Norman Bates speaks, and the twist at the end that nearly gave me whiplash the first time I saw Psycho.

Hitchcock’s ability to set the peculiar, ghostly mood and to intertwine it with such an enthralling and enigmatic narrative (punctuated with that high-strung score, of course) stunned audiences back then, and will continue to stun them as future generations experience this classic for the first time.