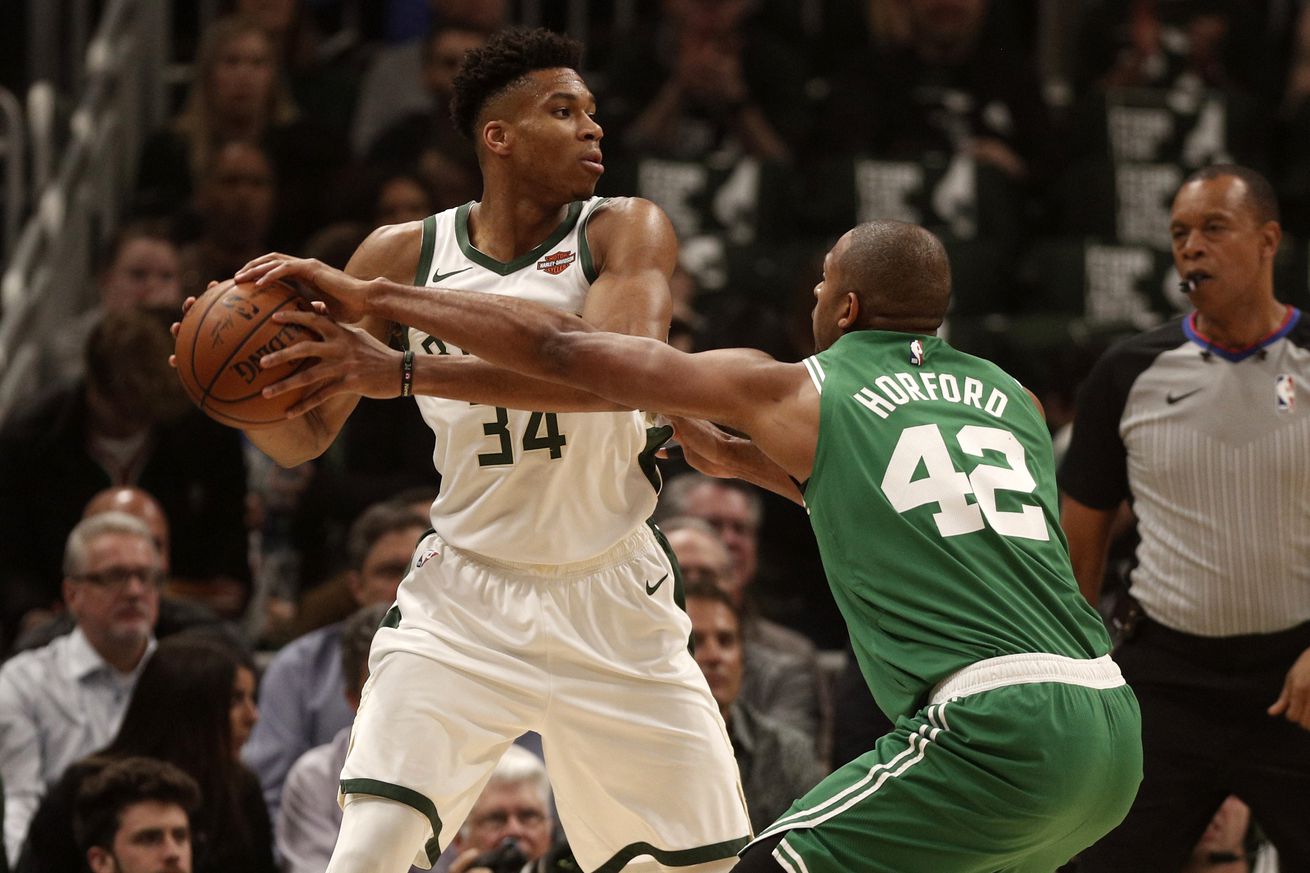 Whether Irving returns or not, it won’t matter if the Celtics don’t have a steady interior in place. Horford has a strong case to opt out before the end of June — and Bulpett reports he may.

Kyrie Irving lectured from the Celtics’ locker room about what it takes to win a championship. Marcus Smart ripped into the team numerous times. Al Horford, the eldest Celtic, instead led by example, with a brilliant 12th season in the NBA that marked his most-efficient shooting season and second-best in terms of net-rating.

But even Horford — in Boston’s lowest moment before halftime of Game 5 — finally had it. Nikola Mirotic sidestepped Gordon Hayward to drill a three, putting the Celtics down 51-36, and Horford shot up from the bench to berate David Guthrie, who hit him with a technical. With Horford’s impending player option decision due by June 29, worth $30 million for 2019-20, the moment could devastatingly mark one of his last in a Celtics uniform.

Al Horford came off the bench to yell at the ref and Eric Bledsoe loved it pic.twitter.com/5nKFCTlGzm

The prospect of Irving departing after his 30% shooting performance in the team’s four straight losses to the Milwaukee Bucks will inspire many to offer to drive him to Logan. Irving will certainly opt out of his 2020 option and weigh his future, though the potential that his departure could coincide with Horford’s is a dire reminder that Boston does not have as strong of a succession plan at the center position.

Since Isaiah Thomas and Danny Ainge lured Horford from the Atlanta Hawks, over strong runs by the Washington Wizards and Houston Rockets, he has filled the Celtics’ most daunting defensive assignments, played an essential secondary ball-handling role in their offense and anchored Brad Stevens’ favored small lineups, despite his preference to play power forward. He mustered a Game 1 shutdown of Giannis Antetokounmpo and a -1 effort in Game 5’s blowout loss during one of the worst series in Celtics history.

The “Average Al” nickname — easily mocked by his standout postseasons — stemmed from his balanced game. Horford’s assembled an unmatched array of talents at the position that would be nearly impossible to replace. His exceptionalism across various areas made him a generational supporting talent, impossible to replace.

“I’ve enjoyed being here in Boston,” Horford said after the Game 5 loss. “I just have to wait and see what we’re going to do as a team, and the steps that management’s going to be taking forward.”

The fragility of the Celtics’ center position showed through both the many blows to Aron Baynes’ lower body and the pack of ice that settled on Horford’s knee for most of the year. The Celtics went 8-6 in games that Horford missed, compared to a 12-3 mark without Irving.

Daniel Theis struggled to make the same impact that preceded his knee injury in 2017-18, and is a free agent this summer. Baynes can opt out of his $5-million 19-20 option. Robert Williams rarely played and was often injured during his rookie season. The state of the position renders Horford Boston’s most valuable player.

Steve Bulpett reported that the Celtics spoke individually with Horford and every player on the roster on Thursday. Contract discussions did not come up, but Bulpett cited a source who said Horford would be willing to restructure his contract for a more team-friendly annual figure in exchange for two more seasons of security.

Hypothetically, the deal could be worth $45-million, in three annual installments of $15 million, as opposed to the $30-million lump sum he is owed in 2019-20. Despite the enormous figure that once appeared to be a shoe-in on the C’s books, it’s unlikely that Horford opts into his 19-20 deal if he wants to see what moves the team has in store. He would not lose much value in exchange for flexibility.

An opt-out may even be preferable to the Celtics for the same reason. If Horford opts in, he could become a trade piece, instead of involved in plans Boston’s plans that they cook up while he waits. The free agent market will likely wait for Kevin Durant anyway.

If Irving departs, Anthony Davis is not in the cards and the C’s relent to a youth movement, Horford could then complete a team like the Rockets, Clippers or Warriors on the mid-level exception. The Nets could commit money and contention, depending on who else they bring in. Whether he stays or goes, opting out places the power in his hands.

The Celtics posted their best offensive rating with Horford on the floor, and he tied for their top defensive rating. His defensive box plus-minus beat out any of his teammates by 1.2 points on a squad that once again regularly won behind its defense. The Celtics ranked in the top-five in defensive rating each of the last two seasons, and Horford slowed down MVP candidates Giannis Antetokounmpo and Joel Embiid.

Beyond being the perfect modern big man — aging like fine wine — Horford improved his value into each of the postseasons he played with Boston, while other NBA bigs diminished. The Celtics have not developed an impactful big man that they drafted since Al Jefferson, and they could not find a comparable talent to Horford on the open market.

His summer decision is of equal importance — if not greater — to Irving’s.