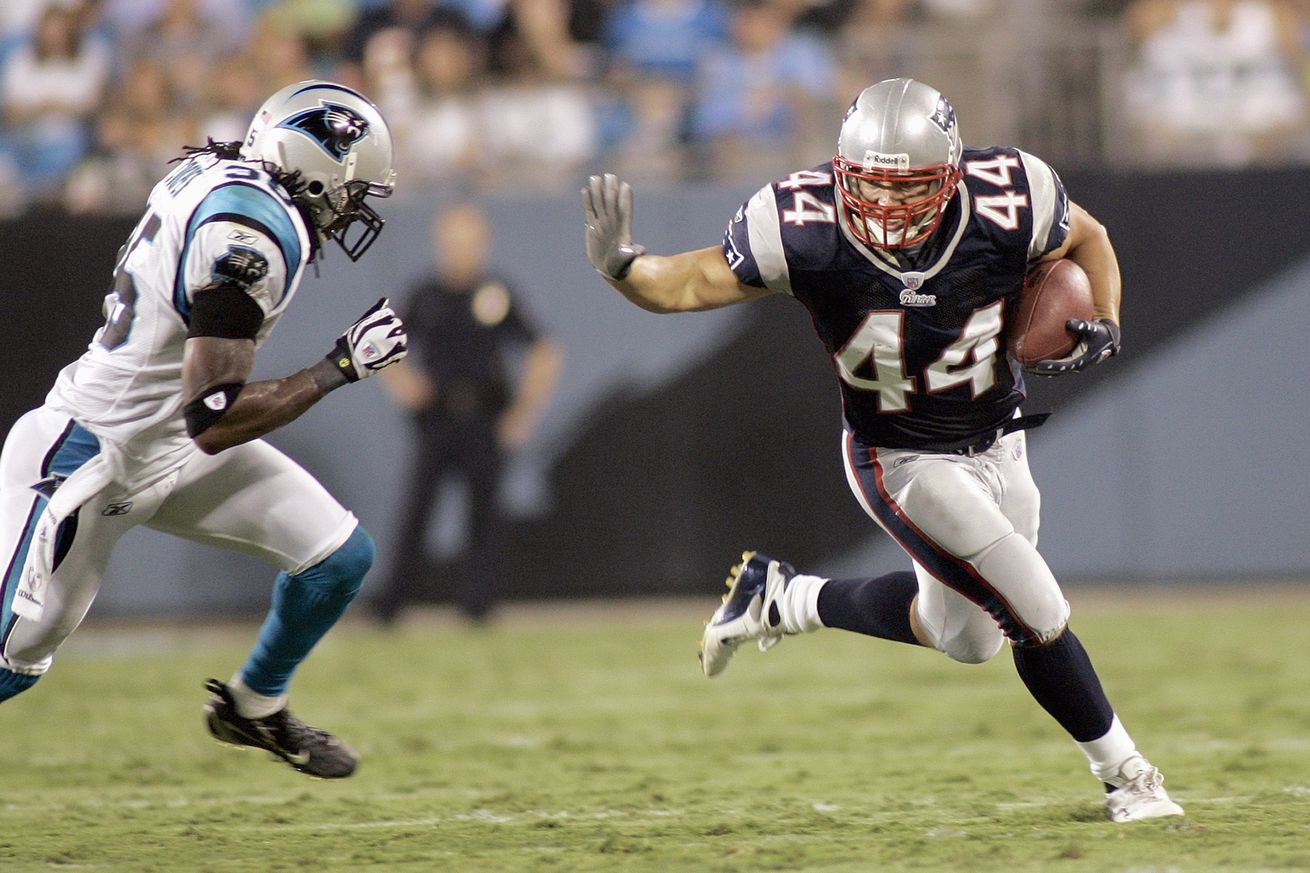 Everyone’s had that experience of someone in a different jersey telling us “You guys better enjoy this run while it lasts!”, right?

Do they…do they think we’re NOT enjoying it??

And for all the documentaries, the 3 Games to Glory(s), the America’s Game(s), the Do Your Job(s), the NFL Top 100s, and so on and so on, the only answer to “how much else could you possibly want to know about the team that took the definition of ‘dynasty’ in the modern NFL and spiked it into the rest of the league’s collective face?” is MORE.

Forget modesty; in this case, more IS more. Heath Evans played fullback for the Patriots from 2005 until he left for New Orleans in 2009 (just in time for their Super Bowl run, natch) and over the weekend on the Your Mom’s House podcast, he riffed for almost 20 minutes on his time with the Patriots and…basically just that. Brady. Belichick. The coaching. And most importantly, what keeps the Pats playing chess while everyone else tries to cut-and-paste success.

(or, in at least one recent notable case, watching SO much Patriots tape that you end up playing yourself. It happens)

H/T to….who else? Fear the Beard on Twitter for bringing this to my attention on a hung over Bruins-watching Sunday afternoon.

He said Belichick told Brady “If you weren’t so worried about you & Gisele’s next GQ magazine, maybe, just maybe you wouldn’t have thrown that INT”

(the whole thing is worth watching, if for no other reason than the first few minutes are a great “let’s remember some guys” about getting clocked by Ed Reed and Lance Briggs and Brian Urlacher; the Patriots stuff really gets cooking around 3:00 in and pretty much dominates the rest of the show.)

In case you’re stuck in class or at work or have suffered the worst fate know to man – forgetting your headphones – here’s a few top-shelf cuts to help you power through Monday.

On Bill Belichick’s coaching (after Tom asks him about the “Patriot Way”):

“It’s the Belichick Way, for one.

So ultimately, you’ve got to submit to authority, but Bill’s never going to take credit, and he will be the first one, 18-1 Super Bowl, he’ll be the first one, ‘I screwed this team. My fault. Boys, I let you down. I didn’t adjust the way I needed to, this loss is on me.’ And not for a second did you believe it was just lip service. He believed it, he lived it every single day. And so, in that environment, you only survive there if you can submit to authority and you can humble yourself to trust the process. Cause that process is going to change every week.”

On Bill coming down the hardest on his best players:

“There’s not a whole lot of people that can ‘mother-F’ Tom Brady in a team meeting room, and in New England, if you’re the superstar, you get coached harder than everyone else.”

“…he knows, ultimately, me at 35th man on the roster is going to follow Brady at #1 on the roster, so if Brady’s not challenged and he’s not working and he’s not held accountable, you create this level of inconsistency. And that’s a gift in itself.”

Yes, the obligatory “Foxborough High” story is in there as well. Respect to a classic.

“People don’t realize, all the people that come out, like, um, Marsh, Cassius Marsh, these losers that come in there like ‘oh, the place is no fun, yada yada yada’ and when you’re a winner in your heart, there’s no better place to play, there’s no more fun. Cause we’re all dying.”

On Brady’s mindset and how TB12 takes the coaching points:

On Randy Moss (and listen for the classic Randy stories later on):

“I always want to praise Randy, cause Randy came here in ‘07 and helped our team, is a brilliant football player, and worked hard, but you always see different wounds in people…”

“I love Randy, he was a great teammate, a great man, a great father, he’s an awesome dude, but he got offended about his contract price, and he kind of let it boil up in his heart, and before too long he was gone.”

OK fine, here’s the Randy Moss story, because you deserve to be happy:

Heath: “Can I tell a Randy Moss story?”

Heath: “We would do these private golf tournaments down at the Breakers. And it was just a 9-hole, I hated golf, but it was the easiest way to raise money from rich people.”

Heath: “So we would do this 9-hole golf course, and I would bring in Randy, and Brady, and Mr. Kraft, all these different people, and then people would pay 10, 15, 25 thousand dollars to golf with them, and they knew it was going to a great cause. Well, we’re like 3 or 4 holes in, and this lady on the golf cart comes by with all the Gatorades and peanut M&M’s and all the stuff, and stops at Randy’s hole. And, you know, she is 15 months pregnant, she’s ready to pop.”

“Randy’s got his tobacco in his mouth, ‘Girl, I’m a daddy, you can’t be out here in this Florida humidity, it’s bad for the baby, you gotta get home!”

(Randy voice again) “I’ve got kids, I know, you can’t be on your feet like this!”, and he’s like, touching her belly and stuff, just sweet as can be, and she’s like “sir, I know you do work, doctor says it’s fine”, and Randy whips out a wad, and I mean a wad, of hundred dollar bills and just hands it to the girl and tells her to go home. Now, he knew she couldn’t go home. She’s not going to just leave. But that’s Randy.”

I swear, it’s like every time one of these comes out, the part where for the past 20 years the Patriots tend to play their best ball right around the same time the snow starts falling makes more and more sense.