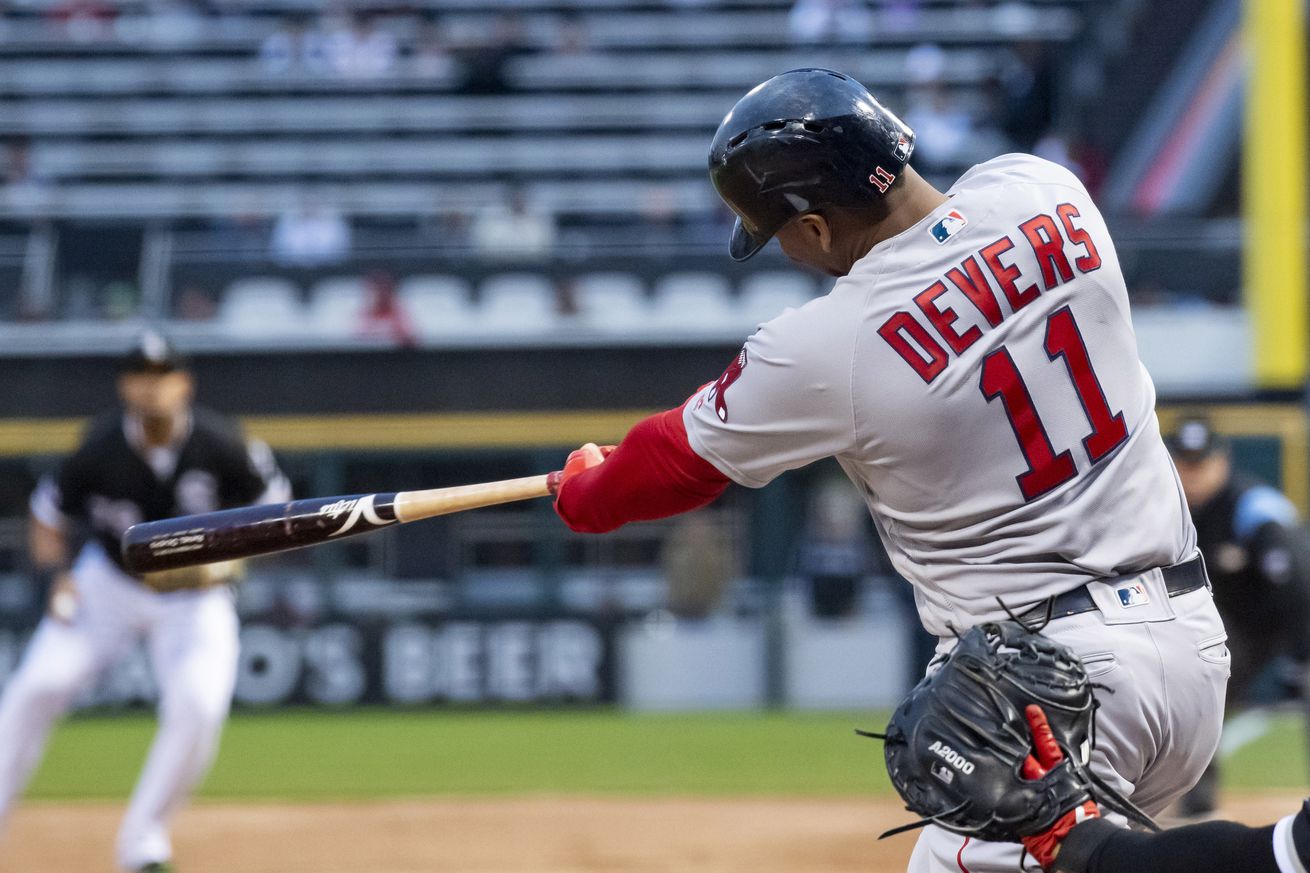 How exactly is Rafael Devers so scorching hot right now?

The Red Sox are playing some of the best baseball in the entire league right now and are finally looking like the historically great team from last season, at least for a small stretch. Given how well they are playing, it’s clear there is more than one player heating up. In reality, it’s been a team effort from every area, with the offense exploding with regularity, the rotation starting to meet preseason expectations and the bullpen doing their job for the most part. Granted, the schedule hasn’t been the most intimidating group of games we’ve ever seen, but one of the big lessons from last year is that you have to beat up on the bad teams if you want to be great. It’s particularly important in this era of baseball with so many American League clubs bottoming out, whether on purpose or by circumstance.

With all of that being said, Rafael Devers has stood out over the last few weeks as the guy who is really starting to turn things on. Through his first 41 games — he has yet to miss a game this year — everyone’s favorite large son is hitting .336/.408/.456 for a 132 wRC+. After yesterday’s action, Devers is fifth in baseball in batting average, tenth in on-base percentage and in the top-40 in wRC+. He’s been particularly hot over the last month, as he ranks second in batting average over the last 30 days and he’s fourth in OBP and 14th in wRC+. It’s been really incredible to watch, with the 22-year-old seemingly smacking multiple hits in every single game.

He’s doing a lot well right now, of course, but the biggest part of his game that currently stands out is the way he is controlling the strike zone. Over his first two seasons in the majors, Devers generally struck out around a quarter of the time while walking at a rate just below the league-average. This year, however, he’s cut his strikeout rate all the way down to 14 percent while he’s walking over ten percent of the time. It’s been a stark difference and his strikeout and walk numbers now put him in company with guys like Anthony Rizzo and Matt Chapman.

What’s particularly interesting, however, is that the reasoning behind these improvements don’t seem to be what one would likely expect if just presented with the numbers. Knowing what we know about Devers’ first two years in the majors, one would probably guess he’s cutting down on his chases and showing a more disciplined approach. However, according to Statcast’s data, his swing rate is essentially the same as it’s been in his first two years both in the zone and out of it.

Instead, the difference has been the amount of contact Devers is making, and particularly on pitches out of the zone. His contact rate on pitches in the zone is up a couple percentage points from his career norms, but his swing rate on pitches out of the zone is up from rates in the low 60s to 72 percent this year. That is obviously cutting way down on strikeouts, though one wouldn’t expect that to result in such a sharp increase in walks, too. We’ll get to that in a minute.

Before we do, though, the other surprise with this fact that he is making so much contact on balls out of the zone is that so many balls are going for hits. He is indeed hitting the ball better than ever, and also much differently than ever. Again looking at Statcast’s data, Devers has cut way down on fly balls with his rate falling down to 13 percent. He’d been in the low-20s in the first two years of his career. Instead, he is hitting a ton of line drives, with that rate all the way up to 30 percent compared to typical rates around 20 percent. Fly balls obviously result in more power, generally speaking, but they also lead to more outs on balls that stay in the yard. Right now, Devers’ batted ball outcomes are sacrificing power for a ton of hits. On top of the line drives, he is just making consistently good contact. His “barrell” rate is down, which is the best kind of contact a batter can make by Statcast’s classifications, but he’s making up for that with almost no “weak” contact and a “solid” contact rate almost double his rate from 2018.

As we look forward to how sustainable this sort of old-school approach is, there are a couple of facts about Devers’ year that really stand out to me. For one thing, he is seeing fewer breaking balls this year and more fastballs. It’s not a major decrease in breaking balls, but Statcast has the rate at which he’s seeing these pitches down from about a quarter of the time in 2018 to about a fifth of the time in 2019. We know that early in his career he had some trouble laying off bad breaking balls and also had trouble making contact on them. The Red Sox lineup does seem a little deeper this year with Michael Chavis and Christian Vázquez swinging good bats, which helps at least partially explain the increase in fastballs.

The other part of this stemmed from a curiosity of mine, and I think this is the key part to why this approach is working so well for Devers. The obvious question after seeing how much more contact he is making on pitches out of the zone is where those lack of whiffs are coming. Looking at Brooks Baseball’s zone plots (which don’t include Sunday’s game), I compared his whiff-per-swing rate in 2019 to that of the first two years of his career, and one zone in particular stands out.

Devers has seen lowered whiff rates in just about every portion of that plot out of the strike zone, but the starkest difference comes at the top of the zone. If you recall, early in his career he was an easy mark for the high fastball, looking to crush it and often swinging right through it. Now, he’s still whiffing a ton in that one zone up and away above the strike zone, but overall he’s cut his rate down below 50 percent.

It’s more than just not swinging through it, though. We think of contact, for the most part, as balls in play, but that hasn’t been what Devers is doing here. While he’s not really swinging through many of these pitches, he’s also not putting balls in play. In fact, on all of his swings on pitches above the zone only four have gone in play. Instead, he’s fouling off more than 40 percent of these pitches at which he swings. This is the big reason why he’s been able to maintain such good contact numbers despite making so much contact out of the zone. He’s fighting off the pitches that are tough to hit, forcing pitchers to come down to him and punishing him for it.

I don’t think this version of Devers, as fun as it has been to watch, is going to be the final version we see. Honestly, that’s not a difficult assumption to make about a 22-year-old. That doesn’t necessarily mean he’s going to get worse, though. I think at some point pitchers are going to adjust and stop giving the young third baseman so many high fastballs. Presumably, they’ll start to attack him with more breaking balls down and out of the zone. If Devers can continue to fight off the tough pitches, he’s going to continue to be a force. At some point, his strikeout rate will probably increase some, but with the way he’s swinging and approach his at bats right now it’s a safe bet the power increase is going to outweigh it.

Over The Monster https://www.overthemonster.com/2019/5/13/18617535/rafael-devers-hits-strikeouts-walks
Categories: Sports