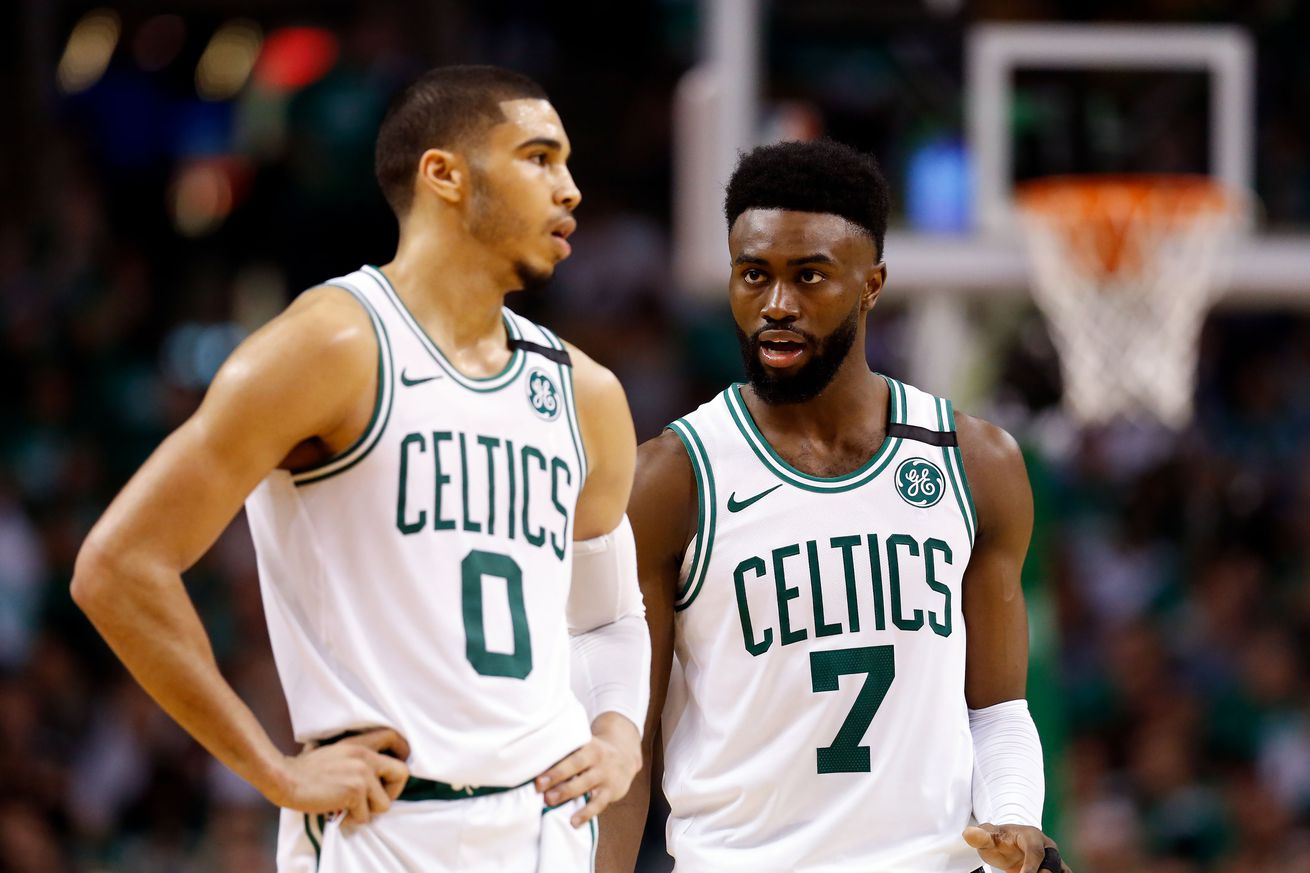 Long presumed to be the less promising of Boston’s young wings, Jaylen Brown has an underrated case for the title of the team’s best young prospect.

Jayson Tatum has been widely considered the crown jewel of the Boston Celtics’ cadre of young players and with good reason. He’s an effortless shooter who just averaged 15.4 points per game while shooting 37.3% from deep in what was considered something of a disappointing sophomore season.

For comparison’s sake, Kawhi Leonard finished his second year in the NBA averaging 11.9 points. Paul George? 12.1. Jimmy Butler? 8.6. Each of Leonard, George, and Butler was older at the time than Tatum is currently. All of this to say, Boston’s lanky scoring savant finds himself in decent company, as far as statistical comparisons go.

Tatum was burdened with sky high expectations heading into the year. He fell well short of them, and showed little improvement from his rookie campaign in terms of raw production. In fact, there’s a reasonable argument to be made that his game regressed. Tatum struggled with intelligent shot selection, launching far too many contested mid-range shots for anyone’s liking beyond his own (and perhaps that of a former Laker and childhood idol of his who will remain unnamed at CelticsBlog).

Learning to become an apex scorer requires experimentation from a variety of places on the court, however, and it isn’t fair to assume Tatum would be able to grow his game without working out a few inefficient kinks in his early career. Advanced metrics still paint a highly favorable portrait, which should come as an encouraging sign for Celtics’ supporters.

Still, there was an inescapable lack of development to Tatum’s second season that stood in stark contrast to his first, during which it seemed he added a new trick each week. His lack of progression prompted some to wonder, just slightly, if he might not be the rightful heir to the title of Boston’s most intriguing young asset. Another wing stands in the waiting for his chance at the crown: Jaylen Brown.

Most logical observers hand waved the possibility of Brown being the best prospect on Boston’s roster as an overreaction to Tatum’s limited signs of growth, and there is merit to such a line of thinking. Many have found themselves to be prisoners of the moment when assessing young NBA talent. To preach caution in shifting one’s long-term stance is always wise.

But what if there is also merit to the belief that Brown is the most appealing of Boston’s prospects? A merit born not simply in relation to Tatum’s performance, but built on the foundation of his game. Such a premise is worth exploring.

Offensively Brown lacks the polish that many of the NBA’s greats displayed at a young age. He’s still learning how to dribble. His jump shot is prone to streakiness and occasionally looks uncomfortable if he’s not in a rhythm. He’s a bit of a disaster at the free throw line. Passing is rarely ever a consideration. These things all matter, but none of them are death knells for Brown’s potential.

There are plenty of foundational building blocks to work from. He’s a handful to stay in front of despite his relative lack of dribble moves, but Brown has turned himself into an solid three-point shooter after being considered a complete non-threat from deep coming out of the draft.

Brown took 41% of his shots at the rim this year, ranking him in the 81st percentile as compared to his positional peers, per Cleaning the Glass. That’s a testament to his athleticism. Brown has incredible burst, bunnies for days, and a fearlessness attacking the hoop that serves him well.

If the rest of his game – his dribbling and playmaking in particular – ever catches up to what his body allows him to do on the court, Brown will be an absolute nightmare to deal with. The same is true if he can find a way to remain consistently locked in on the defensive end of the court.

Brown has all the tools to be a lockdown defender. He’s long, strong, fast, and perhaps most importantly, willing to grind. He can slide his feet with point guards, slither around screens against dangerous shooters, take a shot to the chest from big wings, and is even learning to bang with post behemoths from time-to-time. The tools are all there, though their application is far from perfect.

Brown is jumpy, both against up-fakes and even just executing Boston’s schemes. He’ll over zealously direct ball handlers and give up seams that are too large to concede. He overhelps somewhat frequently and is forced to scramble back to shooters in a manner that keeps him off balance, and as such, unable to apply his gifts effectively. He falls asleep away from the ball just as all young players do. And yet, there is still plenty of reason for hope.

Brown has flashes of brilliance defensively, and he’s a prodigious enough athlete to recover from many of the mistakes he makes with regard to the fine details of execution. He’s already a good defender. A bit more refinement could make him a great one. That alone is not enough to make him the Celtics’ top prospect, but when taken into consideration with his offensive profile, things start to get interesting.

When we think of the league’s best wings, there are a few boxes that must be checked. All of the elite players at Brown’s position can play on both ends (excluding LeBron in the regular season), consistently knock down three-point shots, and are capable of producing efficient offense.

Brown already checks the first two boxes, and he gets to the rim and the free throw line – the two most efficient sources of offense there are – more frequently than the overwhelming majority of the league. He’ll need to find a way to actually translate shots from both locales into points, but placing a bet on Brown to improve his free throw percentage and ability to hit shots by the basket seems a reasonable wager.

Growth requires playing time, however, and in that sense there may be some reason for concern. Boston is loaded with players itching to see the court, and to date, Brown hasn’t been the priority among the Celtics’ many young mouths. The roster is likely to thin out a bit heading into the upcoming season, and that could be a major boon for Brown. He won’t realize any star potential if he’s not given the space to experiment and learn.

That means playing him frequently and through rough patches. It likely also means putting the ball in his hands more often. Brown won’t ever be able to develop the skills he needs to leverage his athleticism unless he’s empowered to do so. Learning through repetition is the only path through which his potential identity as the Celtics’ best young player is realized. Boston would be wise to explore it. Brown has a special combination of skills that are worth cultivating.