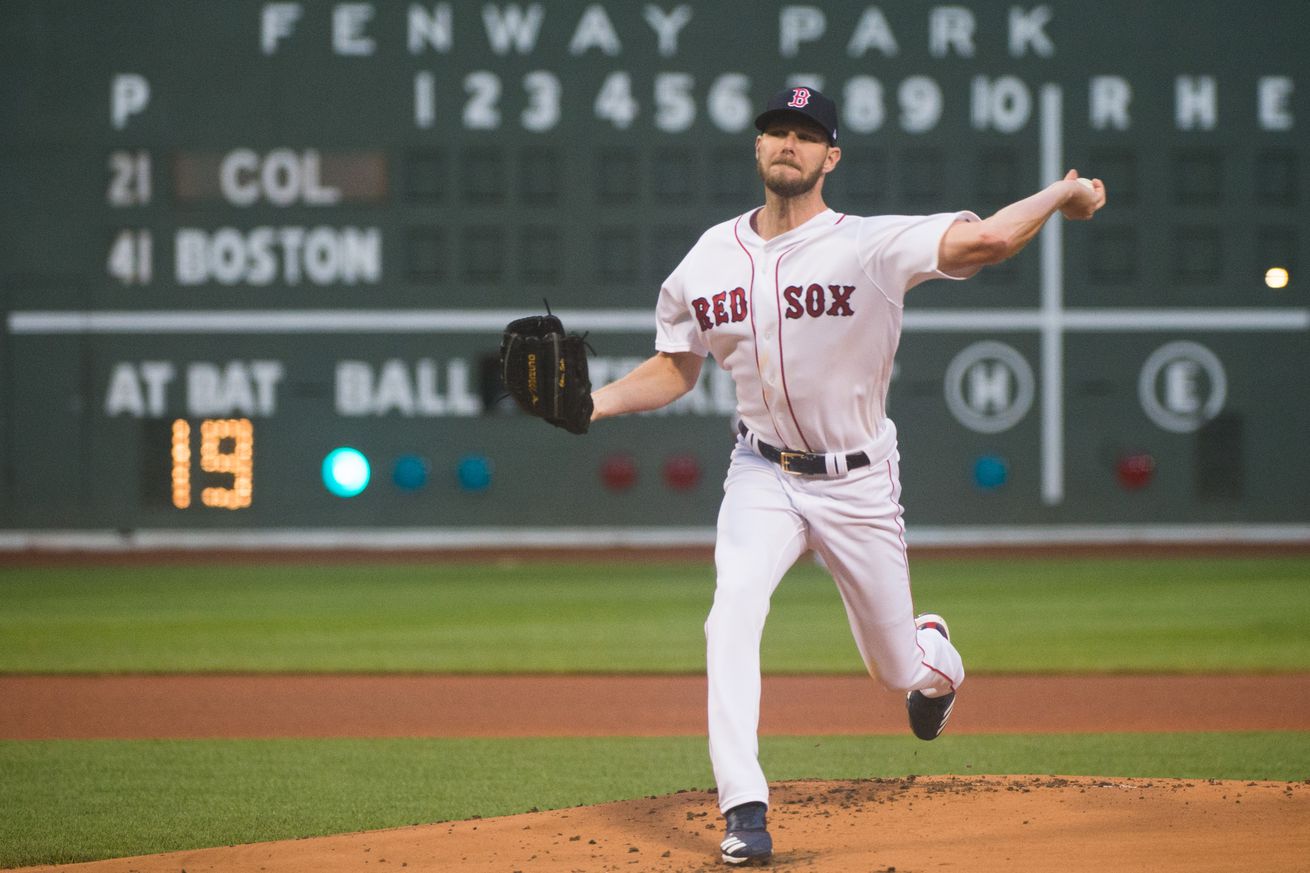 Chris Sale was about as good as we’ve ever seen, but the Red Sox still lost.

This was a brutal loss. After winning their previous five games it’s hard to be mad about a single loss, of course. It was bound to happen. But given the specifics around this particular game, it hurts. Chris Sale was absolutely magnificent in his start on Tuesday, showing some of the best stuff we’ve ever seen from him. That’s obviously saying something. The lefty struck out the first six batters he saw and eight of the first nine, eventually getting through seven innings with 17 strikeouts. It was the most ever for a seven-inning start. Unfortunately, he got into a bit of trouble at the end of his start and the bullpen — specifically Brandon Workman and Ryan Brasier — couldn’t get the job done. The offense also could not, getting three solo homers and not much else against Kyle Freeland. The Rockies starter was fine, and he is the type of pitcher who can be tough to pick up if you’ve never seen him, but he wasn’t so good that the Red Sox couldn’t have broken this one open. The bottom line is they got 17 strikeouts in an all-time Chris Sale performance and they got two errors from all-world defensive third baseman Nolan Arenado. And they still lost. That stings a whole lot.

Chris Sale is something else, you guys. I mean, good lord. Over his previous two starts before this one the Red Sox ace had been on another level, striking out 24 batters over 14 innings with just one run and one walk being allowed. He took things to yet another level on Tuesday, particularly early on. Sale had absolutely everything working in this game, but his slider stood out even above the other offerings. He was locating the breaking ball wherever he wanted. Whatever the eye level, whatever side of the plate, the slider was hitting the mitt of Sandy León. It was breathtaking, and I don’t use that lightly.

Here’s how things went for Sale to begin this baseball game.

That was three up and three down in three consecutive innings his first time through a Colorado lineup with plenty of talent. It wasn’t just three perfect innings, either. It was eight strikeouts through three innings. Absolutely absurd, and he didn’t stop there. In the fourth he got Blackmon, Story and Arenado in order again, though only Story struck out in this inning.

In the fifth, Sale’s perfect game was broken up and there was a threat from the Rockies for the first time Tuesday night. It was Mark Reynolds getting his team off the schneid with a ground-rule double out to the right field corner. It wouldn’t matter, though, because Chris Sale is Chris Sale. After the double he got a line out before getting two more strikeouts to end the inning and strand the runner in scoring position. The southpaw then came back out for the sixth and struck out two of three to get up to 14 strikeouts on the night.

Meanwhile, the offense desperately needed to get at least a run or two because wasting this kind of Sale Day would be a crime against humanity. Kyle Freeland, the Rockies starter for the day, matched Sale through two batters as he struck out Andrew Benintendi and Mookie Betts to start his day. Then J.D. Martinez got on with a single and Xander Bogaerts drew a walk, but Rafael Devers had a dart of a line drive caught to end the inning.

After that first, though, the power started showing up. Michael Chavis started it in the second, and as we know his power is no joke. The rookie blasted a ball down the left field line for an absolutely moonshot of a no-doubter. Statcast had the solo shot at 451 feet. It was reviewed and it very well could have been foul, but the umps upheld their original fair call, likely in large part because it was so high above the foul pole it was hard to conclusively change the call.

The next inning brought even more power from the Red Sox lineup. It was Martinez this time, who had been struggling in the home run department until recently but has now seen the floodgates open. In the third, the slugger took a changeup down in the zone and he blasted it into the Monster Seats for a solo shot. A couple batters later, the red-hot Rafael Devers put a fly ball the other way that snuck into the first row of the Mosnter Seats for yet another solo shot. That last one wasn’t exactly crushed, but it doesn’t have to be at Fenway and they all count the same. So, after three it was 3-0 Red Sox.

Freeland would start to cruise a bit from there, with Boston getting a few more chances but nothing too major. From here we fast-forward to the top half of the seventh, and Sale started to look less invincible. The inning was started by Story, who poked a single up the middle. That brought Arenado up to the plate, and while he’d been quiet earlier in the game a hitter of his caliber is extremely tough to keep down for too long. Sale left a 92 mph fastball up in the zone over the middle of the plate, and the perennial NL MVP candidate didn’t miss it. Arenado put one into the Monster Seats, and just like that it was a one-run game. Sale was a little angry after that, so he came back with three straight strikeouts to set a new career-high plus one more for good measure. That was 17 strikeouts through seven innings, and the end of his outing. There was some hope he’d get a chance to tie the single-game strikeout record of 20, but at 108 pitches the Red Sox weren’t doing that.

So, Brandon Workman came out for the eighth to try and protect the one-run lead. Workman got a quick first out thanks to nice defense from Chavis at second base, but then Chris Ianetta smoked one high off the Monster for a double. It missed tying this game by mere inches. Workman struck out the next batter to leave it up to Charlie Blackmon. He did the job, getting a 2-0 curveball that stayed in the bottom of the zone. The Rockies star outfielder was waiting for that exact pitch and he blasted it out over the wall in straightaway center field. Suddenly, it was a one-run deficit for the Red Sox.

Boston’s best chance to come back was going to be in the bottom half of the eighth with their 4-5-6 hitters due up. Scott Oberg came on for the Rockies to take on the heart of this Red Sox order. The inning started with a rare defensive miscue from Arenado, who just bobbled a routine ground ball from Bogaerts. That was followed by a fielder’s choice to put Devers on first with Bogaerts getting cut down at second before Chavis knocked a base hit into left field. With two on and one out, Mitch Moreland came up to pinch hit with the tying run in scoring position. He came through, too, working a full count before putting a base hit into center field. That would score Devers and put Chavis on third base with one out with Eduardo Núñez coming to the plate. Núñez hit one well, but his line drive went right at the second baseman and Moreland was doubled up at first base to end the inning.

So, with the game tied we headed to the ninth and Matt Barnes came on to face Arenado and the rest of the middle of Colorado’s lineup. He got a 1-2-3 inning, giving the offense a chance to walk it off in the ninth. Jackie Bradley Jr. came up as a pinch hitter to start the inning and drew a leadoff walk. Benintendi followed that up with his fourth strikeout of the night before Betts flew out. J.D. Martinez then popped one up, and we headed to extras.

Barnes came back out for another 1-2-3 inning in the tenth, getting three more strikeouts in the process. The same group that came up in the eighth then came out for the tenth, with Bogaerts again starting off by getting on base. Devers would strike out after that and then Chavis grounded into a double play to send it to the eleventh.

Ryan Brasier got the call for that inning, and he issued the first walk from a Red Sox pitcher of the night. He got two outs after that before issuing another free pass to put the go-ahead run in scoring position. Mark Reynolds then smacked a single into center field, and Colorado had the lead once again.

Boston had one more chance with Wade Davis taking the mound for the bottom of the eleventh. They couldn’t get it done, managing a two-out single but nothing else as they fell in a gut-punch of a loss.

The Red Sox will look to bounce back from this rough loss and salvage a split in this short two-game set with a win in the finale on Wednesday. They’ll send Eduardo Rodriguez to the mound for that one to take on German Márquez. First pitch is scheduled for 7:10 PM ET.