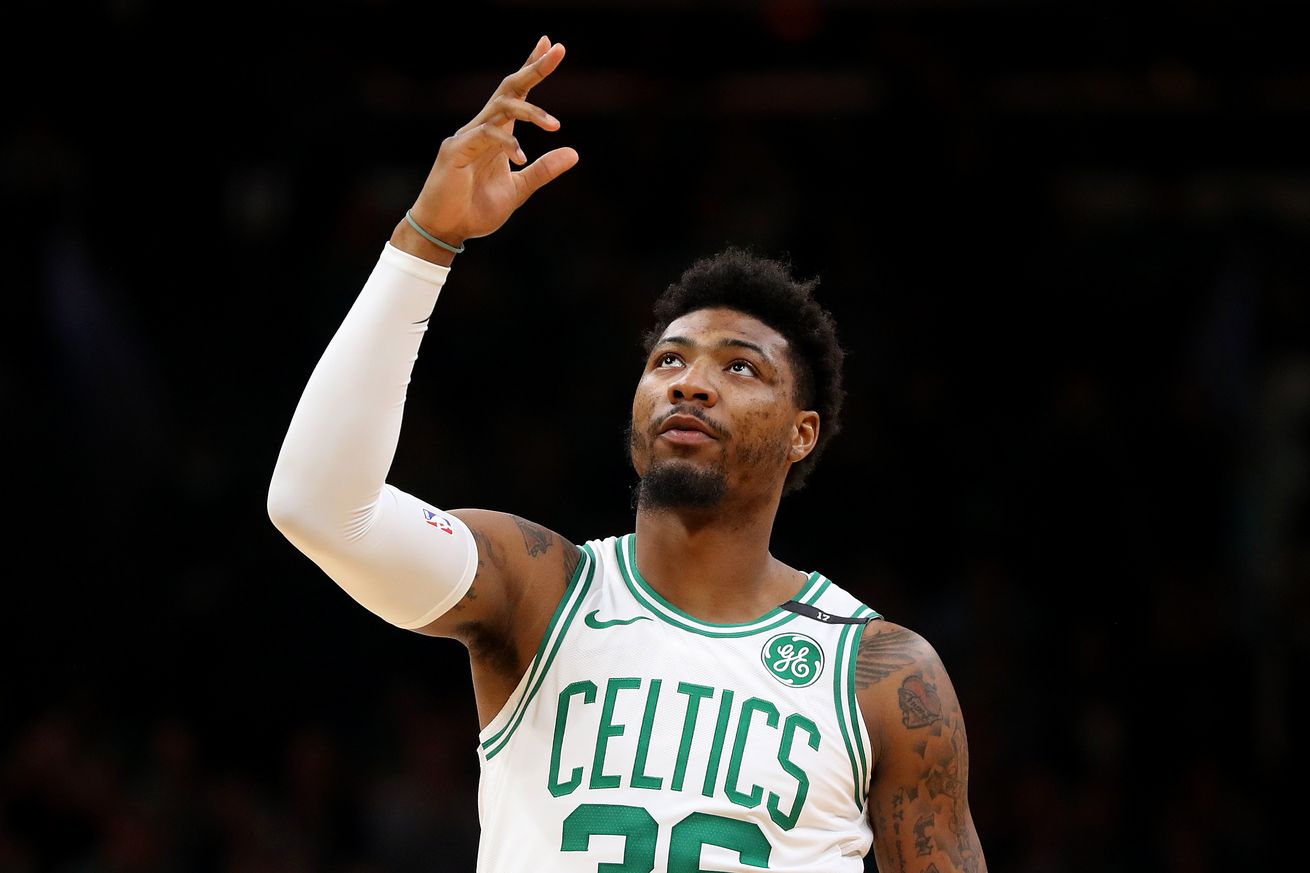 This year, Marcus Smart recorded his best NBA season and established himself as a leader both on and off the court.

The 2018-19 Boston Celtics’ season is over, and it’s not overstating things to say their season left a bad taste in many fans’ mouths. Their ignominious five-game defeat at the hands of the Milwaukee Bucks in some ways encapsulated their season-long struggles, and now we travel into an off-season of uncertainty with regards to the team’s future.

While we evaluate the season that was, it’s important to remember the highs along with the lows, and today, we’re focusing on arguably the team’s biggest bright spot: Marcus Smart.

“This was probably my best year — by far — out of my five years, especially on the offensive end,” opined Smart during his end-of-season exit interview. “Each year I plan on getting better on both ends of the court … I want to be one of the best two-way players to do it.”

Well, it just so happens that this was the best two-way season of Smart’s career thus far. He was perhaps the only Celtic that didn’t suffer a prolonged slump at any point during the year, and his promotion to the starting lineup back in November helped jolt the team out of their .500 scuffling to start the year. You could make the case that he had the best individual season of anybody on the roster.

Celtics fans have long floated the “if only he could shoot even average from three” hypothetical with Smart, and this year, they finally saw it play out. His 36% mark from deep slightly outpaced the league average (35.5%), and beat out his previous career-high by 3%. If you only watched Smart this year, you’d find it hard to believe that he’s the owner of one of the least efficient shooting seasons in NBA history.

A significant factor behind this improvement was his dramatically more favorable shot profile. Smart has largely excised a lot of the bad shots that plagued him through the first four years of his career. He’s been more willing to shoot off the catch — nearly 55% of his shots came without a dribble — and he’s been more judicious in picking his spots — NBA Stats classified 63% of his shots classified as “open” or “wide open.” Last season, when he shot 30% from deep, those percentages were just 42% and 51%, respectively.

The shift in his shot chart from last season to this one has to rank as one of the most dramatic in the entire NBA.

Smart has added to his offensive game in each of the past three seasons, and this was his most dramatic improvement yet, pairing together his improved outside shooting with a more refined approach inside the arc. He almost entirely excised mid-range jumpers from his arsenal, attempting just 58 two-pointers from greater than 10 feet away from the basket, and he shot a very nice career-high 69% at the rim. Smart is no longer a player you merely live with on the offensive end of the court — he’s now a legitimate complementary piece.

The other side of the ball has always been Smart’s claim to fame, of course, and he was as good defensively as he has ever been in his career. He set a new career-high for steals with 1.8 per game and ranked eighth among NBA point guards with a 1.28 DRPM. He was, as usual, a terror on the perimeter and nearly immovable in the paint, even spending possessions guarding centers down low. A berth on an All-Defense team will be well-deserved.

His individual defensive value has always been apparent, but this season, he took a step forward in terms of team value, both on and off the court. He’s the longest-tenured Celtic, and as such, has embraced his growing role as a leader and mentor in the Boston locker room.

“The personality I have to bring people together is something that’s special,” he said. “These are my brothers, and everybody loves playing basketball, that’s what we’re here to do. So it won’t be hard to facilitate that, and I definitely want to be [a leader].”

Take, for instance, Kyrie Irving, who recorded the best defensive season of his NBA career this season. Notorious for being a generally poor defender, Irving graded positively in DRPM for the first time ever (+0.43) and ranked highly in hustle categories traditionally associated with Smart. His 2.5 deflections per game ranked 29th in the NBA, and he was third (!) in loose balls recovered, with 1.8.

Needless to say, Irving will be quick to tell you where his newfound defensive inspiration came from.

“I’m so grateful [Smart] is on our team,” he said after Boston’s December 12th victory over the Washington Wizards. “I had just watched some of his college highlights, as well as some of his playoff highlights defensively. Yeah, in my down time, I watch Marcus Smart highlights.”

The only real disappointment of Smart’s 2018-19 season was largely out of his control: the oblique tear that held him out of all but two of Boston’s postseason games. There’s never an opportune time to lose a crucial starter for four weeks, but for a Celtics team finally finding its stride as the regular season came to a close, Smart’s injury was a brutal setback. In typical Smart fashion, he powered his way back onto the court for the final two games of the series, despite being less than 100%.

“I’m just proud of myself for being able to do that,” said Smart, perpetually on-brand. “You know, I tore my oblique and was back out there in four weeks. You don’t see that.”

Not sure I say this enough, but damn I love Boston… pic.twitter.com/zgJSQyueX5

When Smart inked his four-year, $52 million extension with the Celtics this off-season, it looked like a good deal for both sides. After what he showed us this season, you could now argue it looks like a downright bargain. There may not have been as much to cheer for this season as we may have hoped coming in, but Marcus Smart lived up to — and, in many cases, surpassed — all of our expectations.

For his part, Smart is ready to do more.

“Basketball is what I do to escape. I love doing it and I’m blessed to do it,” he said, just one day after the season came to an end. “Even though the season didn’t go as planned, I’m still happy because I’m still able to go out there and do what I love to do.

You just move on, you know? I get to come back, and I get to do it again.”