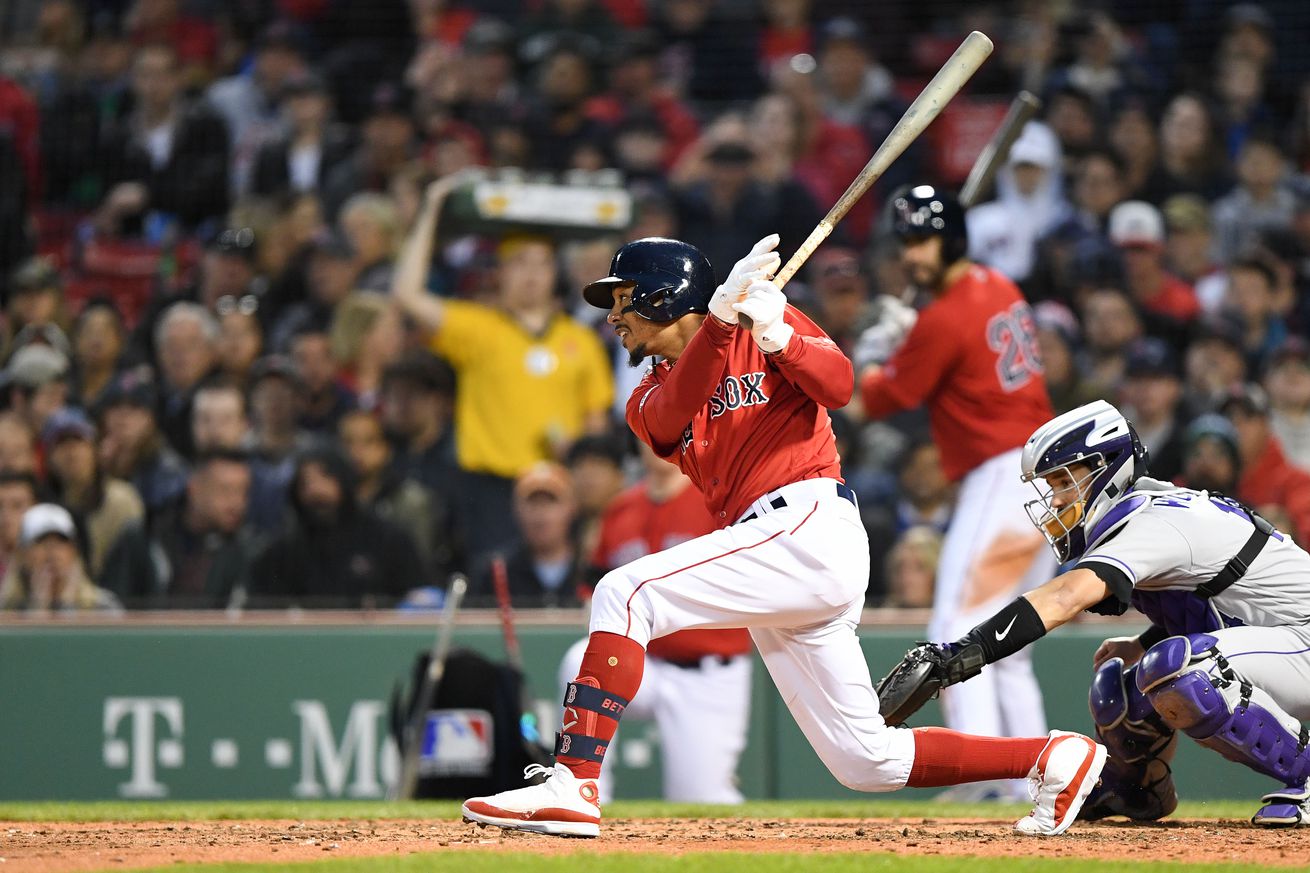 Boston’s offense has looked much better over the last month or so, and their approach is a big reason why.

As the Red Sox have been playing better baseball over the last few weeks, and really even if you go back as far as a month ago, the offense has been a big reason why. The pitching has certainly stood out more, but that’s largely because the point from which they were coming was so much lower. The offense was decent even on the disastrous season-opening west coast trip, with the pitching costing them the majority of those games. That said, the offense did most of their damage in garbage time and there were still a lot of flaws with the group while the team was losing. Even ignoring the numbers, they didn’t look like themselves with guys clearly starting to press and trying to do too much. They abandoned the approach that worked so well in 2018. That’s the biggest difference at the plate of late, as they are working within themselves, following a plan and looking a lot like the group that was so enthralling for all of last season.

Early in the year, while the Red Sox were still out west and still causing us misery on seemingly a nightly basis, I wrote about that lack of discipline from the group and a few players in particular. That was a frustrating point in the year, of course, and this was a very big part of it. For me at least, there are few more infuriating instances in a baseball game than talented hitters like Mookie Betts and Andrew Benintendi watching fastballs go by right down the middle. When Alex Cora and Tim Hyers and J.D. Martinez and others first joined the organization prior to last season, the big focus for this entire lineup was being aggressive. Don’t worry about working counts. Don’t wait for the pitcher to throw you a strike. Jump on pitches you like regardless of the count. Obviously, it worked. They abandoned that approach for a stretch this season, but it is back of late.

If you’re looking for proof of the merits from these results, you can see what the team is doing of late. Over the last 30 days, they are among the best offenses in the entire league. No one is the Astros, of course, as they come in with an absurd 138 wRC+ over the last month. That’s just dumb. The Red Sox are only a few spots back in the standings over that time, though, with their 118 wRC+ over the last 30 days ranking fourth in baseball. Only the aforementioned Astros, plus the Angels and Twins are ahead of Boston over that time. They’ve been able to do that despite being good but not great in the power department, ranking ninth in Isolated Power.

Instead, it’s been that plate discipline that is carrying them right now. The team as a whole is showing off a much better approach at the plate, and probably the best approach from any team in the game right now. According to Fangraphs’ plate discipline numbers only five teams are swinging at a higher rate of pitches in the zone over the last 30 days. That’s good! In the linked post above they were in the bottom half of the league in terms of swing rate on pitches in the zone. On the flip side, only five teams are swinging at a lower rate of pitches out of the zone in this recent span. The Red Sox are the only team in the top six in both categories. As a result, they’ve been able to get on base at a huge clip, which is carrying their offense right now. They’ve made up for their good-not-great power numbers by walking an absurd 12.6 percent of the time over this last month.

In terms of individual players, Mookie Betts and Xander Bogaerts were the poster children early in the year in terms of guys letting good pitches go by. When I wrote the piece in mid-April, Betts’ swing rate on pitches in the zone was 48 percent while Bogaerts was at 51 percent. Both are swinging at strikes fewer than any other Red Sox hitters, but their rates are up to 57 percent each over the last 30 days. That’s closer to last year’s rate for Bogaerts and right at the same rate as last season for Betts. Elsewhere, J.D. Martinez is being incredibly aggressive on hittable pitches, as is Andrew Benintendi. Perhaps most impressive here is Michael Chavis, who is swinging at 74 percent of strikes and just 28 percent of balls. The league-averages, for context, are 67 percent and 30 percent, respectively.

Putting this big turnaround for the Red Sox and their lineup specifically on just one adjustment would be foolish. There’s a lot going right at the moment, and part of it is definitely just regressing to the mean. That said, the approach is clearly a big part of their success right now just like it was when they were having so much success last year. If the Red Sox do get into another funk later in the year, focus on the approach. This team hits when they attack the hittable pitches. When they don’t, well, things get really frustrating really quickly.

Over The Monster https://www.overthemonster.com/2019/5/17/18629032/red-sox-plate-discipline-aggressive-jd-martinez-mookie-betts-xander-bogaerts-michael-chavis
Categories: Sports