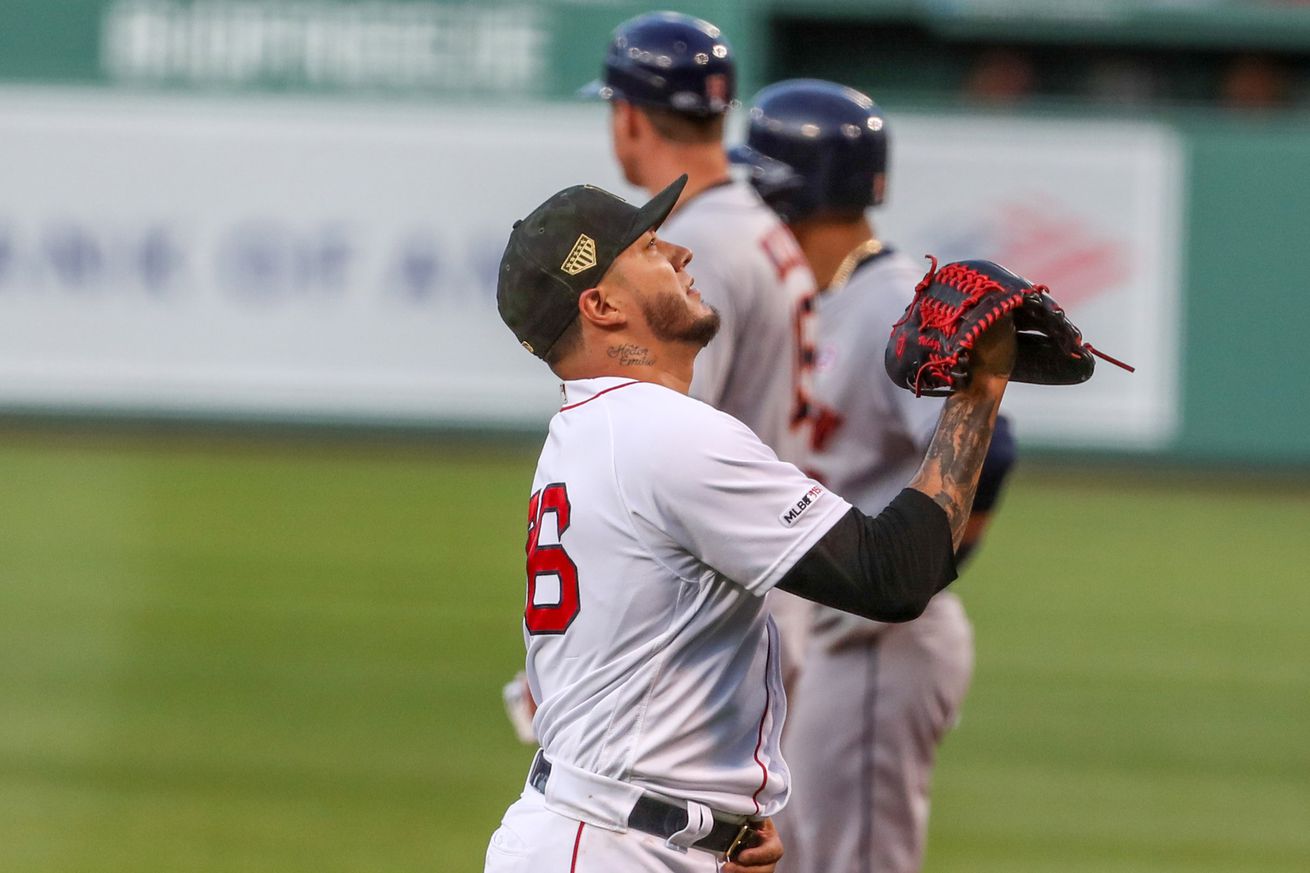 The Red Sox have now dropped their last two games and three of their last four, and this was another frustrating one. Granted, it wasn’t as frustrating as Friday’s game that seemed very winnable, but it was not fun to watch. Really, it was essentially over before it started. The Astros were all over Hector Velázquez, who didn’t have his command and doesn’t possess the stuff to overcome that. They ended up with five runs in the first inning, and that was pretty much that. The offense did have some chances to make this a more competitive game, to be fair, but they picked up where they left off on Friday and failed to come through with the big hits to put together a big inning. The defense also made some big mistakes that only exacerbated some issues with the pitching. It was just an all-around bad game, okay? If you do want a positive, they got a nice multi-inning relief performance from Ryan Weber and Christian Vázquez hit a home run.

If you love good pitching, Friday’s game was the game for you. Rick Porcello and Gerrit Cole both pitched well in an exciting and close game. Not every game can be for you, though. Saturday’s game featured some very bad pitching, most of which came from the Red Sox. There was always a decent chance of this happening, of course, what with Hector Velázquez getting the start. The Astros are, of course, at least arguably the best lineup in all of baseball while Velázquez is the Red Sox worst starting pitcher. To his credit he’s been solid this year, but we know his stuff isn’t exactly overwhelming and if he isn’t pinpoint with his control things can get ugly. Folks…things got ugly.

George Springer, as he always does, led off for the Astros and he wasted no time crushing one. His blast went off the wall in center field for a leadoff triple. To be fair, Jackie Bradley Jr. had a chance to make a great catch leaping at the wall, but it seemed he mistimed his jump. That triple was followed by a walk to Alex Bregman before Michael Brantley came up and put a charge into one himself. This one made it just over a leaping Mookie Betts’ glove, scoring one run on a double. It probably could have scored two, but Bregman had to see if Betts would make the catch. It wouldn’t matter too much, though, as Carlos Correa loaded the bases with a walk before old friend Josh Reddick knocked in a second run on a sacrifice fly. Yuli Gurriel followed that up with a single to drive in one more, and in the blink of an eye Velázquez was already being pulled from the game. The righty recorded just one out and allowed three runs to score against the top six in Houston’s lineup, with two runners still on base.

So, Colten Brewer had the pleasure of coming into this mess and trying to make sure this game didn’t get out of hand before his team even had a chance to bat. He didn’t get off to a great start, giving up a double to Tyler White, the first batter he saw. That allowed both inherited runners to score and gave Houston a 5-0 lead. Finally, mercifully, Brewer got two outs after the double and the inning ended.

The Red Sox were in a hole now and had to start chipping away as quickly as possible. If they were going to do that, it meant getting runners on against rookie Corbin Martin and then actually cashing in on opportunities. That latter part was something they struggled with on Friday. After two quick outs in the bottom half of the first, they had a shot to chip away at Houston’s lead. Martin walked three batters in a row with two outs, giving Rafael Devers a chance with the bases loaded. He was let off the hook a bit as J.D. Martinez came in to score on a passed ball, but the Red Sox third baseman flew out and stranded the other two.

The next part of any potential comeback for the Red Sox was going to be keeping the Astros lineup at bay in the next few innings to allow their offense a chance to keep chipping away. After batting around in the first, the top of the lineup was right back in the box to lead off the second with Brewer still on the mound. Bregman started this rally with a double, and that was followed by a bloop single by Brantley. Andrew Benintendi deked Bregman while the ball was in the air, though, and eventually the Astros MVP candidate was caught between second and third. It appeared the Red Sox had him dead to rights, but Bogaerts dropped the ball during the rundown and allowed Bregman to reach third. That would important because he’d come around to score on a sacrifice fly in the next at bat, and Houston had that run right back. Even on the sacrifice fly the throw from Bradley beat Bregman, but Christian Vázquez couldn’t hold on and apply the tag.

From there, the Red Sox offense continued to chip away a bit, though it felt as though they could have done more. They got a run in the third when Betts drew a walk and Mitch Moreland drove him in with a double. Xander Bogaerts had an infield single overturned in the next at bat on a very close play in what was a big break against Boston. Then, in the next inning, Michael Chavis ripped a ball off the Monster with one out. The rookie made a rookie mistake trying to stretch it to two, though, and he was thrown out. It looked to me like he avoided the tag, but the Red Sox opted not to challenge. It was a strange decision that seemed even stranger when Vázquez came up next and hit the shortest possible home run down the right field line. It was only a solo shot, but it did bring the Red Sox to within three.

While all of this was happening, the Red Sox got a big performance from Ryan Weber in a long relief role. The righty did give up a solo home run to Reddick in the fifth, but he made it through three innings and allowed just the one run, giving the Red Sox chances to come back.

Their best chance for that would come in the bottom half of the fifth with the top of the order coming up and Martin nearing the end of his outing. Benintendi and Betts started the inning with back-to-back singles, and a Moreland walk would eventually load the bases with one out. If the Red Sox were going to come back, they had to do something here. Bogaerts had the first chance, but the zone seemed to expand for him and that helped lead to a big strikeout. As a result, it was all up to Devers, but he worked a full count before grounding out. Boston would come away with nothing, and that felt like the game.

As it turns out, it was game. The Red Sox did get a couple of innings from Tyler Thornburg in which he did not allow a run but was not overly impressive in the process, either. The ninth belonged to Josh Smith, who allowed just a single. Meanwhile, the offense went down in order in each of the last four innings to close out the game.

So, the Red Sox look to avoid a sweep on Sunday. The good news is they’ll have their ace on the mound in Chris Sale, who goes up against old friend Wade Miley. First pitch is scheduled for 1:05 PM ET.

Over The Monster https://www.overthemonster.com/2019/5/18/18630862/red-sox-astros-hector-velazquez-george-springer-josh-reddick-ryan-weber-christian-vazquez
Categories: Sports