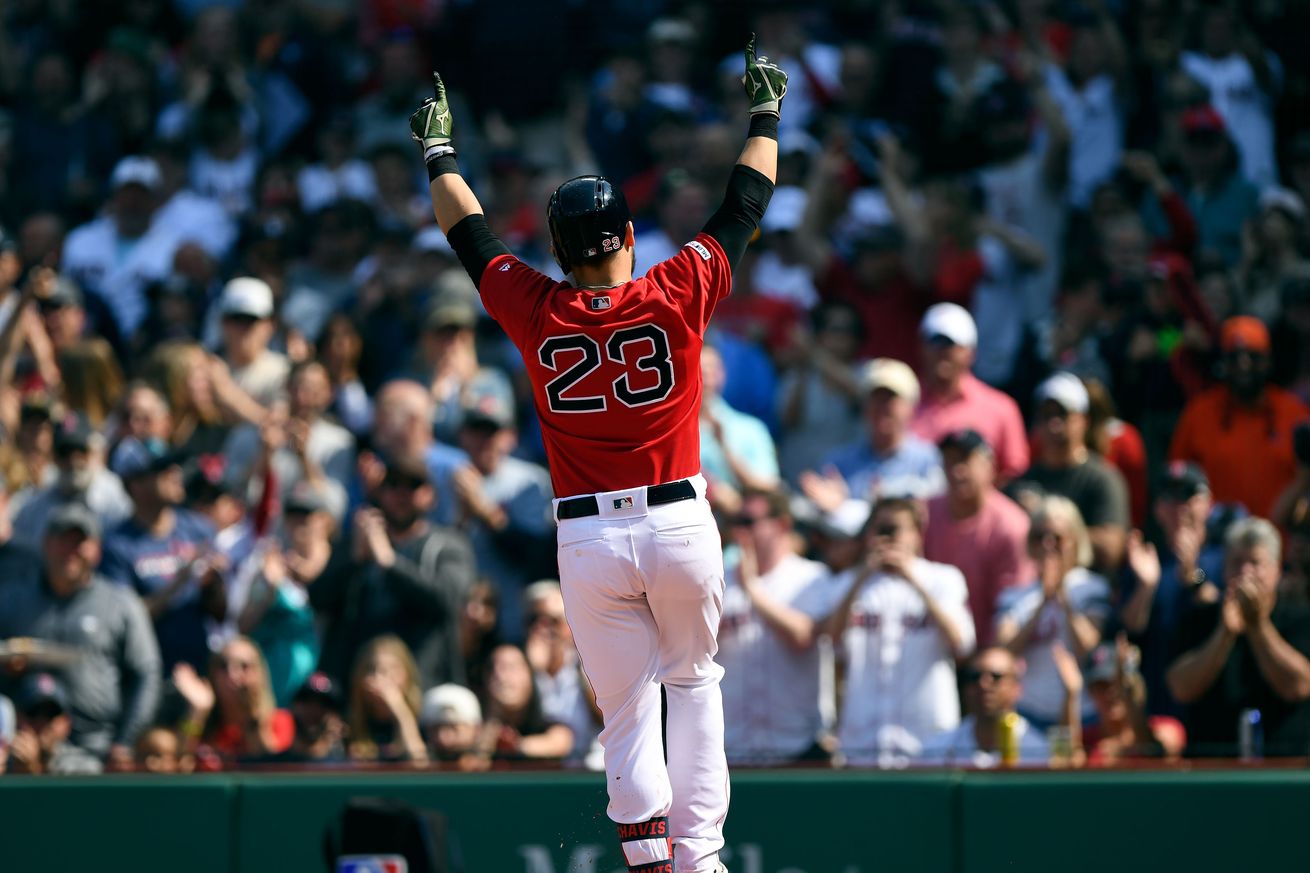 Chris Sale was shaky, but the Red Sox squeaked by to avoid the sweep.

The Red Sox had a rough weekend coming into Sunday’s game, but they had a chance at redemption with their ace on the mound. Unfortunately, Chris Sale didn’t quite look like himself in this outing. His control was sort of all over the place for most of the start and Houston has too good of a lineup to not be pinpoint. The good news is that this didn’t result in a ton of damage and Sale was able to keep things close. He also paired plenty of swing and miss stuff with his control issues. The offense, meanwhile, wasn’t exactly on fire in this game, though they did have plenty of baserunners and came through in just the right number of spots to come out on top by a run. Throw in a huge performance in a tough situation by Marcus Walden, and it was a solid day all-around on a day where the Red Sox needed it.

As the Red Sox headed into Sunday’s game, whose start was delayed by about an hour prior to first pitch thanks to rain, they were trying to avoid a sweep at the hands of the Astros. For that reason they really wanted a hot start to this game, even more than usual. It’s not that this would be a guaranteed victory, of course, as they learned the hard way on Friday. Still, after falling behind 5-0 in the first on Saturday and never digging themselves out of that hole, they were looking to get on the board first.

They did just that in the first, too, although again they did not come away with as much damage as they hould have. Leaving runners in scoring position had been a theme all series long, and it continued in this first inning. That rally started with a single from Mookie Betts, who went the other way against the shift to get on base. Xander Bogaerts then hit a potential double play ball to Alex Bregman at third base, but the Astros infielder was eaten up by the grounder and charged with an error. Both runners then advanced a base on a wild pitch, putting two in scoring position for J.D. Martinez. Like I said, they had a chance to get a big inning here, but they’d settle for just one run when Martinez grounded out to shortstop. That scored Betts, but they wanted more.

Still, despite the disappointment they were able to hand a 1-0 lead over to Chris Sale, who had gotten through a scoreless top half of the first that included a walk and two strikeouts. That sequence would develop into something of a theme with the Red Sox ace, who was never quite as in control as he had been in his previous few outings. Sale’s control was a bit off all day long, and while he got a lot of swings and misses the lack of command led to stressful situations and high pitch counts. Part of it was likely due to Sandy León being absent, but the bigger issue was likely that Houston’s lineup is just outstanding and they’re less likely to go chasing.

Whatever the reason, it didn’t take long for the Astros to get that run back after Boston took the lead. The aforementioned control played a big role in the top half of the second, too, with Yuli Gurriel starting the inning with a walk. After a strikeout and a pop out made it appear Sale had settled down, old friend Josh Reddick smacked a double off the Monster. Fortunately, it was played well off the wall by Martinez, which kept Gurriel 90 feet from the plate. Less fortunately, Sale would hit Jake Marisnick to load the bases and then, with George Springer at the plate, Christian Vázquez was crossed up on a slider. The ball got by him, and the Astros scores on the wild pitch. That was all they’d get, though, as Sale got a strikeout against Springer with two more in scoring position.

The tie wouldn’t last a full inning, though, and that wasn’t good news for the Red Sox. Sale came out in the third going up against the heart of Houston’s order, and for the second straight frame he issued a leadoff walk. This time it was to Bregman, giving him his second free pass of the afternoon. After Michael Brantley came up just short of a two-run homer out to right field, Carlos Correa came on with one on and one out. Sale tried to sneak a fastball by the big shortstop. Instead, his 94 mph heat ended up right in the middle of the strike zone and Correa didn’t miss. He deposited it into the seats in straightaway center field, and just like that it was a 3-1 lead for the Astros.

To his credit, Sale did come back for the next couple innings without as much trouble. He did allow another double to Reddick in the fourth, but that was surrounded by three strikeouts in a scoreless frame and it came right before a 1-2-3 inning in the fifth.

From here, we go to the bottom half of the fifth. The Red Sox were struggling against another old friend in Wade Miley, who has totally remade himself over the last couple seasons. Boston did get a single in each of the next three innings after scoring in the first, but couldn’t advance beyond first base. (In fact, Rafael Devers was picked off at first base.) They finally had more success in the fifth, though. It started with Michael Chavis, who had been struggling a bit of late but was in the leadoff spot on Sunday with Andrew Benintendi getting the day off. He came up with two outs and got a cutter that stayed out over the middle of the plate. That resulted in another huge home run for the rookie, this one traveling over everything in left field. It also brought Boston back to within a run. Betts followed that up with a double before Bogaerts had a pop up fall in over Gurriel’s glove to score the tying run.

Sale came back out for the sixth, again looking to avoid giving those runs right back to Houston. Just like in the top of the first, he struggled a bit here. It was Gurriel starting this rally, too, although he did so with a double rather than a walk. After getting his tenth strikeout of the night, Sale walked two straight batters to load the bases with just one out, and that ended the ace’s night. All things considered his outing could have been worse, but he left a hell of a situation behind for Marcus Walden to clean up. Walden’s been a magician all year, though, and he continued his act on Sunday. The righty got a ground ball from Marisnick that was converted into a double play to end the inning and keep the game tied.

Walden then came back out for a scoreless seventh, and the Red Sox offense got going against the Astros bullpen. It was the left-handed Framber Valdez in his second inning of work on the day, and Michael Chavis got the inning started with a one-out base hit. Betts then hit a pop up to shallow right field, and again it was misplayed by Gurriel. Chavis got thrown out at second on the play — thanks to a diving catch by Correa while somehow keeping his foot on the bag — but swapping out Chavis for Betts at first proved important. That’s because Bogaerts smoked a double into the left-center field gap on which Betts came all the way around to score, and the Red Sox had a 4-3 lead heading into the eighth.

With the 4-5-6 hitters due up for Houston, Matt Barnes got the call with the one-run lead now in hand. He got a 1-2-3 inning, though it took 20 pitches thanks to an 11-pitch at bat from Correa.

After the Red Sox got a leadoff single but nothing else in the bottom half, it was Brandon Workman getting the call for the ninth. He started off his inning with a strikeout, but then put the tying run aboard with a walk. It wouldn’t matter because he came back with another strikeout and a fly out to end the game and pick up his first career save.

The Red Sox leave Fenway with a win and now head out for a road trip starting north of the border. They’ll head to Toronto for a four-game set that kicks off on Monday, with David Price set to return from the injured list. He’ll take on Edwin Jackson. First pitch is scheduled for 1:07 PM ET.