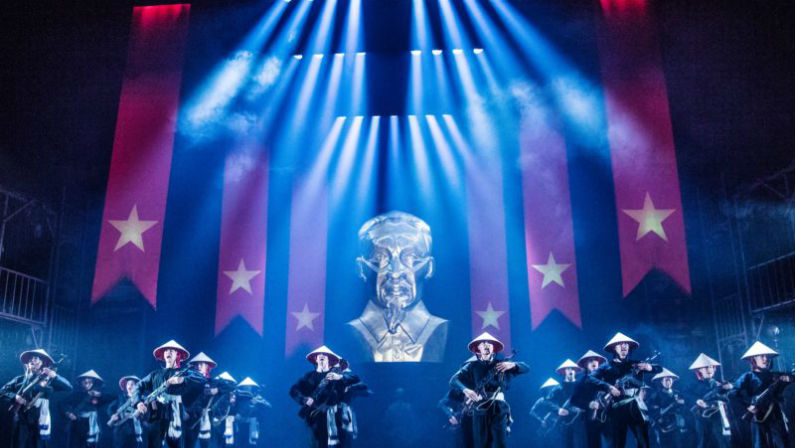 One of Broadway’s longest-running shows is coming to Boston’s own Citizens Bank Opera House next month, and we’ve got an exclusive offer for Boston on Budget readers. While supplies last, you can get 40% off tickets to see the award-winning musical Miss Saigon when you buy tickets through Goldstar.com. These shows are sure to sell out, so get yours before they take off faster than a Huey in a rice paddy.

Miss Saigon is set during the Vietnam War as the Viet Cong forces approach Saigon. Chris, a U.S. Marine stationed in Saigon, falls in love with a Vietnamese bar girl named Kim just as the city falls. Chris and Kim must both decide where their loyalties lie as both the city and their lives break down into total chaos.

Miss Saigon was written by Claude-Michel Schönberg and Alain Boublil, the same team that gave the world the musical Les Miserables. On its first Broadway run in 1991, Miss Saigon was nominated for ten Tony Awards and won three. It has since become Broadway’s thirteenth longest-running show.

Miss Saigon is coming to Boston’s own Citizen Bank Opera House this June for two weeks of unforgettable performances. Whether you’ve seen this legendary musical or are new to it, this is one production you don’t want to miss. Tickets to Miss Saigon normally start at $79.50, but Boston on Budget readers can get them for as low as $49 through Goldstar.com. Sign up for a free membership with any Facebook account or email address and start taking advantage of deals on the best events Boston has to offer.

Miss Saigon will be performed Wednesday through Sunday from Wednesday, June 12, 2019 through Sunday, June 30, 2019. See the production’s official website for a full list of dates and times.

The post Broadway In Boston Welcomes Miss Saigon to the Citizens Bank Opera House appeared first on Boston on Budget.