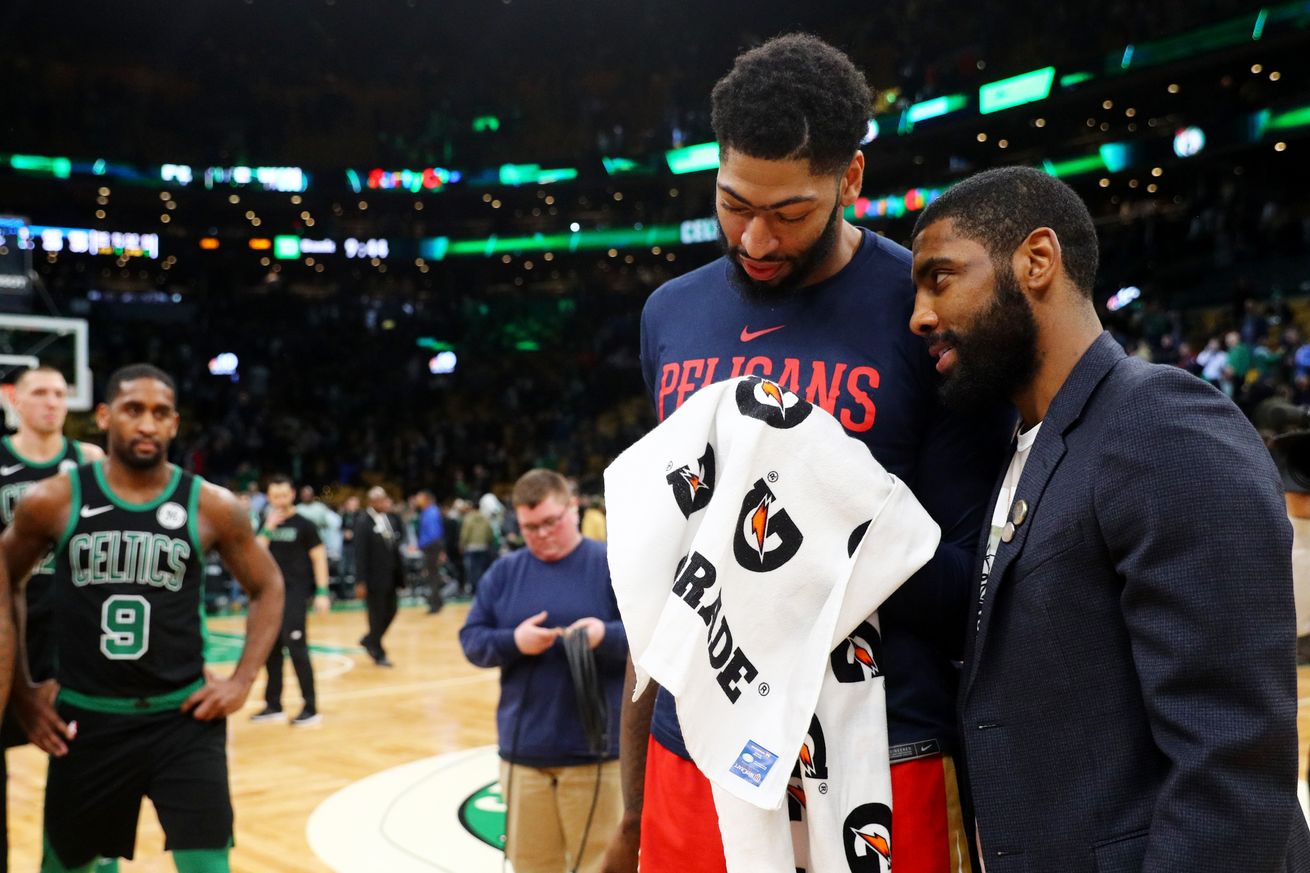 Danny Ainge has long-wanted Anthony Davis. He has his chance this summer.

With all that setup done, it’s time to go down a path that Celtics fans have drooling over for years: The Welcome to Boston, AD option.

There are two ways this could go for the Celtics. The first is that Kyrie Irving agrees to stay and Danny Ainge goes all in to add Anthony Davis. The second is that Irving leaves, and Ainge sticks with his long-planned for pursuit of Davis and trades for the big man anyway. First, we’ll break down the options with Irving in the fold.

Here are some assumptions:

· This all goes down prior to the 2019 NBA Draft. Now, that means the trade can’t be formally executed until the league year changes over, due to the rule that Boston can’t have both Irving and Davis on the roster at the same time while under their current contracts.

But that’s ok. Regularly, deals are agreed to at the draft and executed when the league year changes over a week or so later. That’s how this scenario works for the Celtics.

· Here’s where things get tricky, so hang in there! Let’s assume Boston knows Irving is re-signing contingent upon the team completing a trade for Davis.

· Ainge and old friend David Griffin agree on the parameters of a Davis trade, so that Boston is using their 2019 draft selections for the Pelicans.

· Then we hit free agency and make the following assumptions: Jonathan Gibson is gone (again!) and Terry Rozier is gone, because he’s not coming back if Irving is the starting point guard.

Alright, so here is what the Celtics have to accomplish:

· Somehow keep a competitive roster around those three

Let’s do some math!

First, Irving agrees to sign a full five-year max deal, with a player option for Year 5. This can be executed the minute the moratorium is over, because Boston is functioning as an over-the-cap team in this scenario and there is no cap space reason to wait. For posterity’s sake, that contract would look like this:

Next is Al Horford’s player option. In this scenario, because Horford is nothing but a consummate professional and team player, he opts out of his $30.1 million deal for 2019-20 in favor of longer contract, at a lower annual salary. Given his advanced age, something along the lines of a three-year, $55 million contract that declines each season makes the most sense:

With Horford doing this, it gives the Celtics a lot of wiggle room around the luxury tax.

Now, Boston has to trade for Anthony Davis. Here’s where it gets really tricky. To trade for Davis in the 2019-20 league year (which the Celtics have to do given the trade rules), they have to match salary for $27.1 million. Under the NBA’s trade rules, it doesn’t have to be an exact match, but within a range. This means Boston has to send out around $21.6 million in salary to match on Davis.

So, how do the Celtics get to $21.6 million in matching salary? There are a handful of ways, but let’s eliminate a few to make it easier to see what we’re really working with:

· The Pelicans aren’t taking back Gordon Hayward’s salary. They’re looking for a quick rebuild with flexibility and cap space. Maybe (maaaaaaaaaaybe) if Boston agreed to eat Solomon Hill’s contract in return the Pelicans would take on Hayward, but that’s getting a little far afield.

· Terry Rozier has no reason to entertain a sign and trade to the Pelicans. They already have Jrue Holiday, who is a capable point guard. And they’re likely adding younger wings in this package from Boston. So, take Rozier off the table.

· Draft picks have no value in salary matching until the player signs. So, if you want to pile together the picks to make up the ground, you have to sign the players first and then wait 30 days (like the Cleveland Cavaliers did when they traded Andrew Wiggins for Kevin Love). Could happen, but that gets messier than it needs to be.

· Irving, Horford, and Aron Baynes (opts in in this scenario) are all off the table too. Irving and Horford for obvious reasons. Baynes because he’s not opting in just to be traded.

· But let’s assume all the draft picks are on the table in trade talks. All three this years, #GrizPick and whatever else. It’s AD!

Got all that? Great! Now let’s do some real math. Remember: $21.6 million is the golden number here!

Let’s start with piling together all the kids:

That is a total of $21 million and change, which falls just short. But it’s close enough to make it workable. The Celtics could send either Daniel Theis or Brad Wanamaker in a sign-and-trade. How this would work is either player signs a three-year contract, but only the first year is guaranteed. This is how the Brooklyn Nets made the math work in the Paul Pierce/Kevin Garnett trade, when they sent Keith Bogans as part of a sign-and-trade to Boston.

The other option is to go the “sign a draft pick” route, which has the 30 day restriction, but isn’t the end of the world. It just means the player would likely sit out Summer League, which makes things messy.

The important part is that this works. It guts the Celtics roster, but this path allows them to keep Marcus Smart. Boston enters the season with a roster that looks like this:

That’s not bad, right? Good mix of offense, defense and shooting. Ring chasers would immediately sign up to grab a shot a contending and the added bonus of playing time. And, like he has with Theis, Wanamaker and Shane Larkin, it’s a guarantee that Ainge has his eye on bringing some player in from overseas to fill a rotation spot on a minimum deal.

OK, so that’s one way. Now, let’s say the Celtics tell New Orleans, “You can have Tatum or Brown, but not both. We’ll still send filler, and all the draft picks you want.” Now, that makes the math tougher, but still doable. It just means saying goodbye to Smart, which would really hurt! But, to cover our bases, let’s break it down:

· Yabusele – $3.1 million (or Williams, if the Pels want a higher upside player)

That’s a total of $23.5 million, which is more than enough to match salary for Davis. This leaves the Celtics with:

So, where does this leave us? It’s probably costing the Celtics a lot, if not all, of their stash of picks. It’s likely to cost Tatum, Brown or both. And it could end up costing Smart as well. No matter what, it’s a high price to pay, but if you’re returning a roster built around Irving, Hayward, Horford and Davis, it’s worth it.

There is a world where the Celtics could trade for Davis, even if they lose Irving. In that case, the salary matching above remains largely the same. And it’s probably fair to think you plug Rozier back in, since Irving would be gone. In that scenario, since it’s far more of unknown if Davis will stick around as a free agent in 2020, Ainge would insist on holding back Tatum or Brown in talks. You simply can’t give up both of them. That means Smart has to go for sure. That means the roster looks a lot like what we laid out, just with Rozier in place of Irving.

If you want Anthony Davis, be prepared to pay for him. But we’ve all been gearing up for that situation for a while now. What people haven’t been prepared for is an off-season where everyone not under contract has had enough and walks away. In the next installment, we’ll cover (insert ominous music here) the Nuclear Summer.