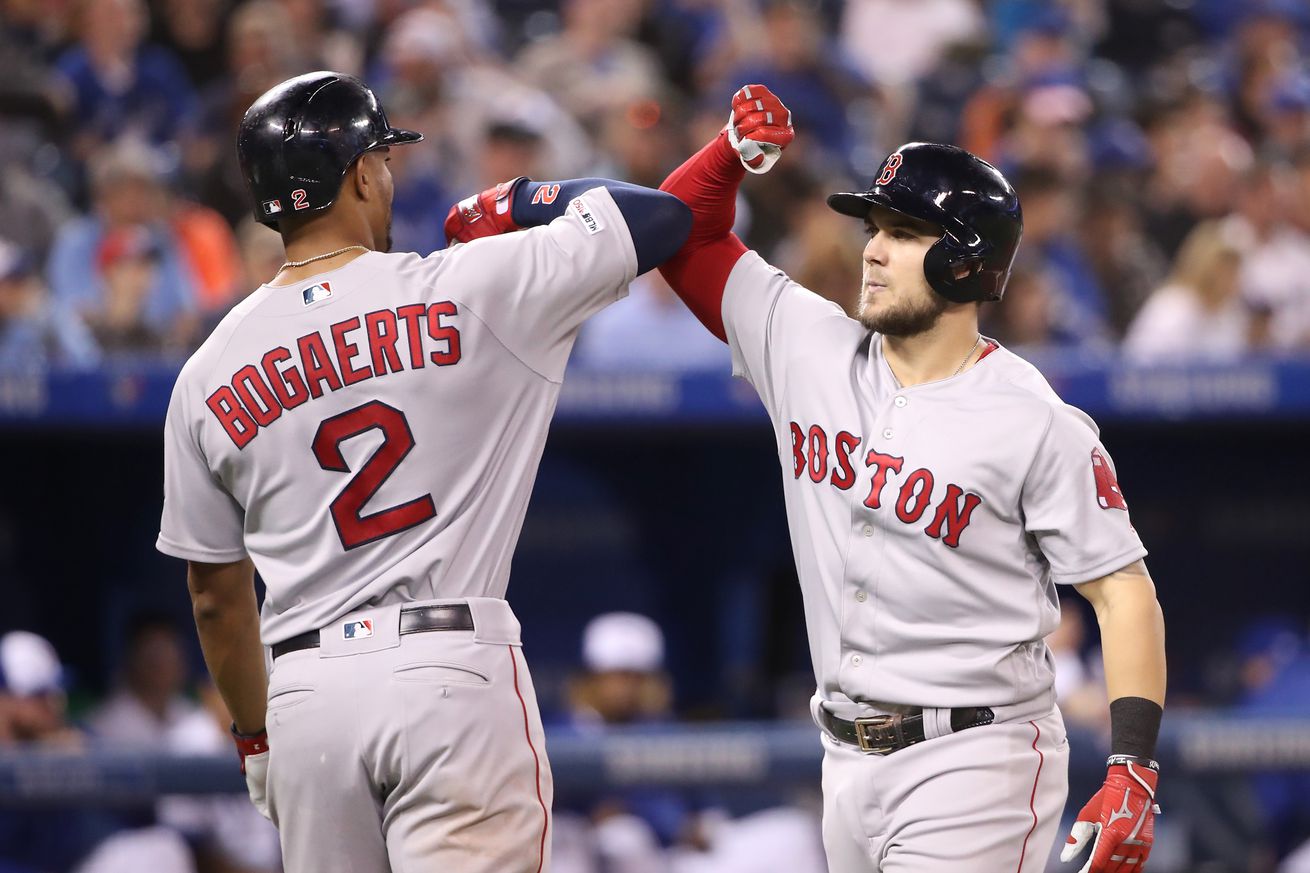 David Price looked solid and the offense went off in a rare Monday afternoon game.

It was a happy Victoria Day for the Red Sox, who opened this four-game set in Toronto with a bang. David Price made his return from a short stint on the injured list and looked mostly good. He was a little off with his command early on and was punished with a home run, though the runs were unearned. He settled in as the day moved on, though, and retired the last ten he faced. The lefty was lifted early as Alex Cora tried to take it easy on his starter in his first game back from the IL. Meanwhile, the offense exploded for ten runs in an all-around performance that included yet another homer from Michael Chavis as well as the first big fly of the year off the bat of Jackie Bradley Jr. Good time all around, imo.

The Red Sox headed into Monday afternoon’s game coming off a very tough series against the Astros. They took one of the three games over the weekend, a result most of us would have taken heading into it given how talented and hot that Astros team was. After the build-up to that series, though, combined with travel north of the border and an unusual Monday afternoon game — it’s Victoria Day up in Canada — the pieces were there for this game to be something of a letdown against a team the Red Sox are clearly better than. Throw in David Price making his first start in a little over two weeks after a short stay on the injured list, and the chances were even greater.

Early on in his outing, Price did look a little bit rusty. Granted, he was far from terribly and the Blue Jays weren’t exactly squaring him up, but he was also off with his location. The lefty, as he’s gotten older, relies more and more on pinpoint command and living on the edges of the zone, so if he’s off he can start to throw a lot of pitches. He needed 20, for example, to get through a fist inning that included an infield single and a bloop single and ended with a pair in scoring position. No runs came across to score, though.

There was more trouble awaiting the Red Sox lefty in the second, too, and this time it did involve him getting squared up. That inning did start off with Price’s first strikeout of the afternoon, and then he looked like he got a routine ground out to second base. Michael Chavis opted to come around and try to one-hand the play, though, and it resulted in a bad, avoidable error. That would prove costly because it allowed an extra batter to come to the plate. That extra batter was catcher Luke Maile, who got a fastball that stayed in the upper-third of the zone over the middle of the plate and crushed it into the seats in left field. That put two unearned runs on the board against Price, though it’s tough to call them truly unearned because it was a very bad pitch to Maile.

Either way, the southpaw settled down in a big way after that second inning. It seemed like he needed a little bit of time to get back into the swing of things, but by the third he was firmly in that swing. After giving up that home run to Maile, Price retired the next ten batters he faced in a run that included three strikeouts. He was only at 67 pitches by this point, but Alex Cora wanted to take it easy on the lefty in his first start back, and that ended his day. In the end, Price allowed just the two unearned runs over five innings of work on three hits and no walks with four strikeouts.

Meanwhile, the Red Sox offense was going up against a guy in Edwin Jackson who has been all around the league but shouldn’t be too much of a challenge to hit. They were also coming off a very frustrating series in which they had a bunch of chances at big innings but failed to come through with runners on base. Fortunately, they did hand Price a lead before he even took the mound. After a couple of outs to kick off the game, Mitch Moreland reached on an infield single (that could have been called an error) before Xander Bogaerts had a base hit of his own. Rafael Devers then hit a 64 mph pop up that found the outfield to give the Red Sox a 1-0 lead with runners on the corners. Devers then stole second in the next at bat, and the throw down got away from the second baseman to give Boston their second run.

After the game was tied on Maile’s home run, the Sox wasted little time getting that lead back. The third inning started with a walk to Andrew Benintendi before Mitch Moreland ripped a double on a line drive off the right field wall to put two in scoring position. Bogaerts then smacked his second single of the day, and the Red Sox were back in front by two runs. A couple batters later, Chavis came to the plate and he made up for his error and then some. Jackson tried to get a cutter by the rookie but instead left it out over the outer half of the zone. Chavis got around on it and send it way out to left field for a two-run shot, and just like that it was a 6-2 lead.

That score remained heading into the top of the sixth, when Steve Pearce drew a one-out walk against Elvis Luciano. (This is mostly unrelated, but Luciano is the first player in the majors to be born in the 2000s.) That brought Jackie Bradley Jr. to the plate and, well, he did a thing he hadn’t done to this point in the year. He got a flat changeup off the outer edge of the plate and drove it the other way for a two-run home run. That’s right. Bradley hit an opposite-field home run — his first dinger of the year — to score Pearce. It broke the game open and made the score 8-2. They’d get two more in the seventh as well on RBIs from Devers and Pearce. Two more would be added on top of that in the ninth when Bogaerts and Devers launched back-to-back homers to make it 12-2.

Out of the bullpen, it was Brandon Workman for a 1-2-3 in the sixth. The seventh belonged to Heath Hembree, who issued a walk but nothing else. Ryan Brasier got the call in the eighth and tossed a perfect inning of his own. Finally, it was Hector Velázquez out for the ninth after recording only one out in his start over the weekend. The righty struck out the side in a 1-2-3 inning to finish off the rout.

The Red Sox will look to build off this blowout victory and continue to the good times on Tuesday night. They’ll be sending Eduardo Rodriguez to the mound to take on Marcus Stroman. First pitch is scheduled for 7:07 PM ET.

Over The Monster https://www.overthemonster.com/2019/5/20/18632648/red-sox-blue-jays-david-price-michael-chavis-xander-bogaerts-jackie-bradley-jr
Categories: Sports